Now that I’m all caught up on the Black 6-inch line, I can start picking away at some more of the 3 3/4” figures waiting to be opened. This time it’s the newly released Snowtrooper Commander and I had a lot of trepidation over buying this one. The Stormtrooper and Biker Scouts that Hasbro released in this line were not all that great and so when this guy turned up at HasbroToyShop, I was hesitant to order a full squad without having him in hand first. I wound up ordering a couple along with some other figures and hoped for the best. Well, those hopes paid off because this is a really fantastic figure! Let’s check him out…

At some point in the near future, Hasbro will be re-branding the packaging on this 3 3/4” line. I don’t know that it will be much better, but I doubt it could be worse. The only good thing I have to say is that the white Snowtrooper stands out nicely against that hideous black card. Also, it’s worth noting that this is a Snowtrooper Commander! It’s been a long time since Star Wars was my number one nerd attraction, so I have no idea what the differences would be between a Commander and a regular old Snowtrooper who is likely to get shot in the face or torn apart by Wampas while storming Echo Base. That having been said, I’ll just be considering these guys my run-of-the-mill cannon fodder variety Snowtrooper. 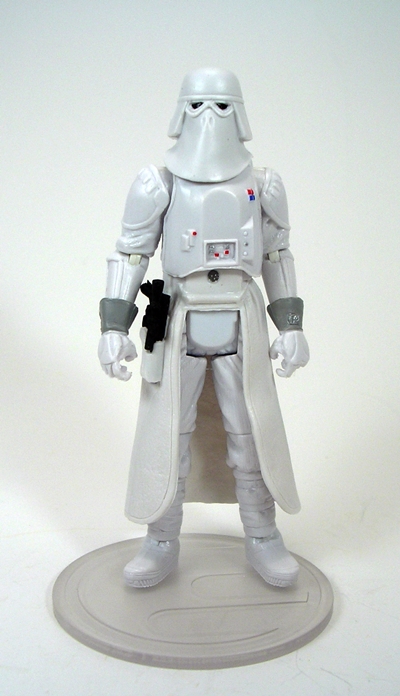 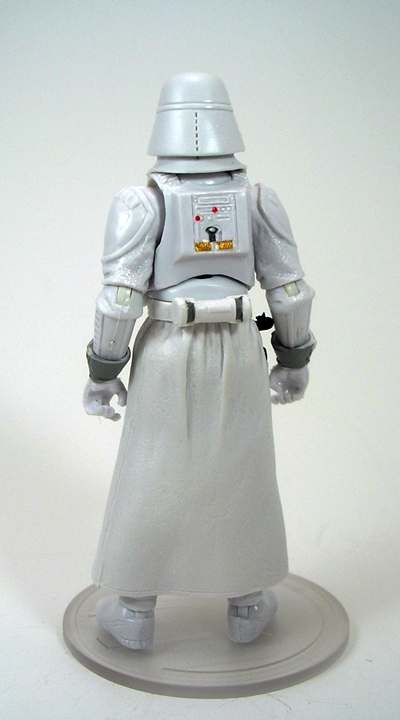 And here he is out of the package and ready for action. I gotta say, I love this figure! I don’t know how much of this fella is new and how much is recycled. The only other recent Snowtrooper I own in this scale is from the VOTC line and that one is still carded and packed away in a storage tote. I’m pretty sure the pistol holster on his kama is new, and maybe that’s supposed to be one of the things that sets him apart as a Commander. Star Wars collectors feel free to weigh in and tell me how ignorant I am!

The sculpting on this figure is fantastic and it really drives home why I love this design so much. It goes beyond my general love of all things Hoth. I think it’s the hood that just makes these guys all the more creepy and sinister looking than your regular Stormtroopers. Also, and I’m not sure there’s any film evidence to back this up, but I always got the impression that these guys were just better in combat than the Stormies from warmer climes. The chest armor is part of the figure buck, but it’s executed well enough that I could have believed it was layered onto the figure. The shoulders are also designed so that the hinges don’t muck up the aesthetics of the armor like it did with the Stormtrooper and Biker Scout. Everything about this figure shows care and forethought and, at the same time, beautifully showcases all the bad decisions Hasbro made with those other two figures.

There’s obviously not a lot of paintwork here, but what there is of it is crisp and clean and so much better than the hack job they did on the recent Stormtrooper release. Look at his backpack and you’ll see two tiny hits of gold paint… there’s no other gold anywhere else on the figure. They busted out that color exclusively for those two little bits. That’s so cool! 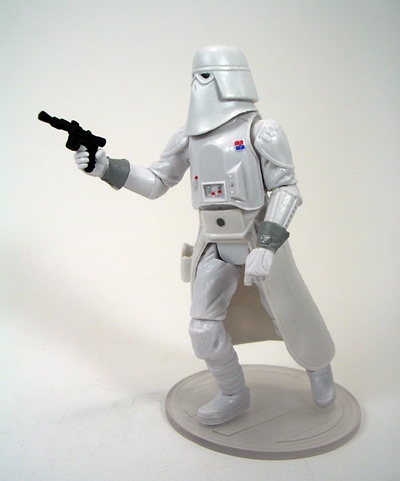 The articulation here is pretty solid with my one gripe being the continued use of that pesky T-crotch, which in this case is less of an issue because the plastic kama inhibits the leg articulation quite a bit. Otherwise, it’s all good. The arms have rotating hinges in the shoulders and elbows and swivels in the wrists. You also get rotating hinges in the knees and ankles, a ball joint in the lower torso and again in the neck. 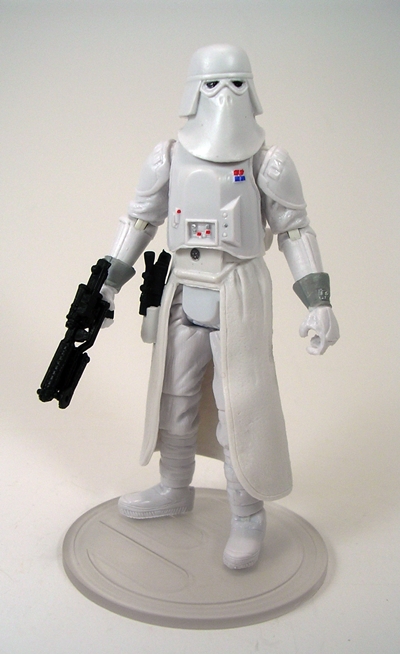 Snowy Commander comes with two weapons. First you get a little pistol, which looks a bit too much like Han’s blaster for my liking, but who am I to scoff at an extra pistol, eh? It also fits snugly into the holster. The other weapon is the newer version of the E-11 Blaster that includes the folding stock. It still impresses me that Hasbro was able to do that on such a small scaled weapon. Sure, it tends to fall apart at the hinges, but I’m impressed nonetheless. 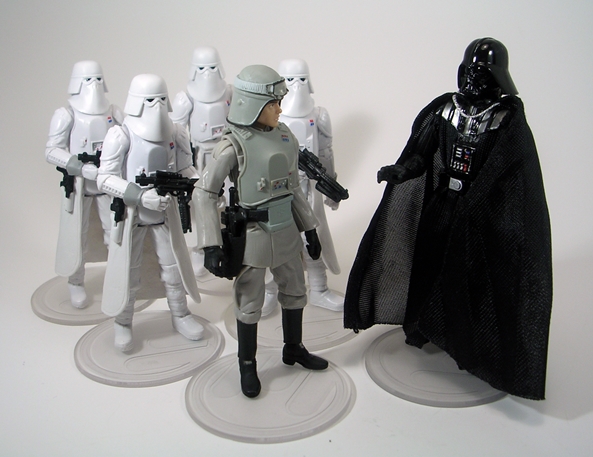 And so the 3 3/4” Black line continues to be a total grab bag of wonderful surprises mixed with crap. Buying this line is like reaching blindly into your bag of Halloween candy and hoping to pull out an Almond Joy and not a handfull of razor blades. This figure is every bit as polished as the Stormtrooper and Biker Scout were sloppy and shameful. As you can see, I quickly picked up a couple more and I’m hoping that a simple squad of four will be enough to satisfy me. But if I ever see another one of these guys hanging on a peg in the wild, I doubt I’ll be able to walk by without tossing him in my cart. And if Hasbro can upscale this guy and give him a softgoods kama and a few more tweaks, I’ll be really happy to get him in the 6-inch scale too!