Here it is, September and so far I’ve only looked at one LEGO set this entire year and that was back in July. It’s crazy, but the reason is simply that LEGO sets have always been my fallback purchases for when all my other areas of interest are running dry and that certainly hasn’t been the case this year. Nonetheless, with the new pre-Christmas resets underway in the stores, I’ve been venturing out to see what’s new and the answer is… NOTHING! The local Walmart has done the set, but the only product on the shelves is what’s been there all along. And so I turned once again to LEGO so as not to come home empty handed.

Unlike the action figure aisles, the LEGO aisle had some new stuff. Not much, but some. I was really hankering for another Marvel set, but none were to be found and so I came home with this new Rebels set. I’m still not one hundred percent sold on this show. I could never really get into Clone Wars and it looks like there may be just enough annoying things about this series to keep me off of it. Still, I have a thing for Expanded Universe ships and this little guy seemed to be right up my ally. The box deco is rebranded with a look at the new animated style Stormtrooper helmet and a shot of ship itself on the front. I like this deco a lot, but then I was never a big fan of putting Darth Maul or Yoda’s face on every box like they’ve been doing. The back of the box shows that this ship can dock with the larger Ghost ship, which I will most likely also be picking up.

While this is a middle-of-the-road set in terms of size, the box is packed. Inside you get a sticker sheet, an instruction book, and two baggies containing 234 pieces, which build the ship and two Minifigs, Ezra Bridger and C1-10P. As always let’s start with the Minifigs! 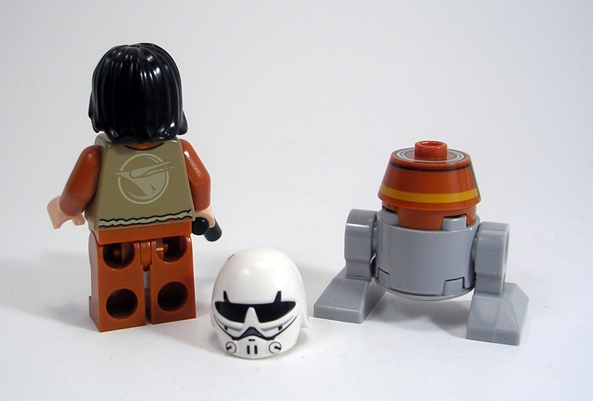 I don’t have a lot to say about Ezra. He’s a pretty standard looking Minifig with a printed outfit and I certainly wouldn’t know he’s a Star Wars character just by looking at him. It seems like he’s going to be the “relatable” character for the kids as he’s a young thief who will seem to hook up with the Rebellion by happenstance. All the source material about him claims he’s “Force Sensitive,” so I would imagine he’s going to become a Padawan at some point in the show, but for now he’s just equipped with his blaster. Speaking of which, I’m still hoping that Rebels tones down the Jedi bullshit and focuses on ships and blasters aspect of Star Wars. Ezra also comes with what appears to be an Imperial Pilot helmet based on the design they will be using in the show.

The second Minifig is the Astromech droid C1-10P also known as Chopper. If I abandon this show early on it’s probably going to be because of this character. He looks like he’s going to be insufferably annoying every second that he’s on screen. In terms of his Minifig, well if you have any LEGO Astromechs than you should know what to expect out of this guy. I’ll just say here that it still pisses me off that LEGO doesn’t do printed details on the back half of these Astromech figs.

In addition to the Minifigs, the first bag of bricks builds the cockpit portion of the Ghost. There are a couple stickers to apply to the sides and the instrument panel otherwise this is a pretty straightforward build. 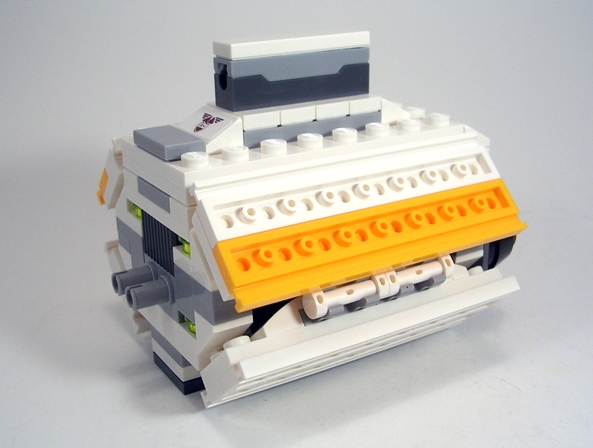 The second bag builds the back half of the ship. It’s a tad more complex because you get some articulated wing flaps as well as an opening compartment on top and in the back. I would have liked to see some SNOT pieces under the wings, since they are exposed when they’re folded up, but I guess the extra bricks needed didn’t cost out. 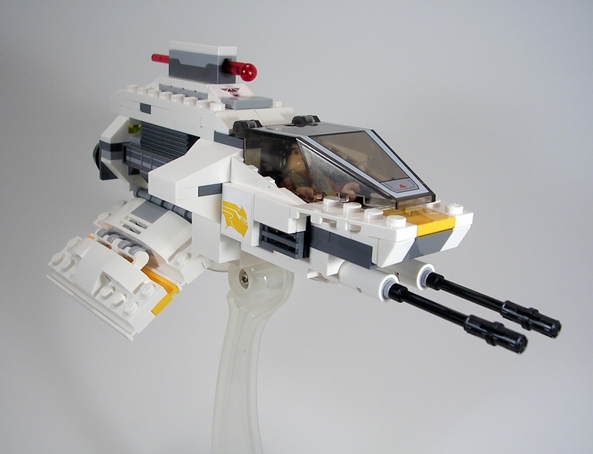 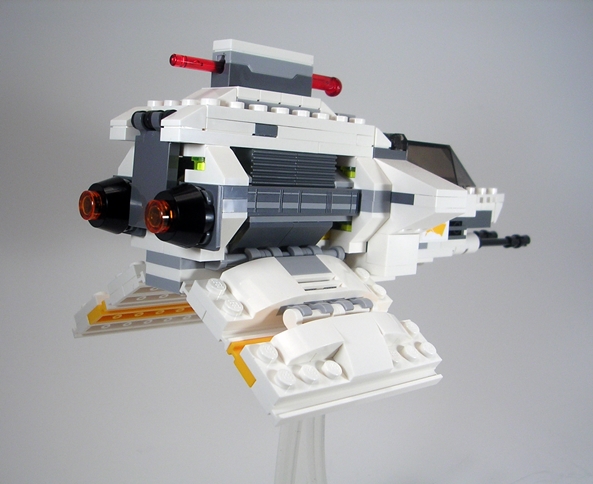 And there’s the The Phantom all complete. If you’re looking for a sexy ship, this set is definitely not for you. I don’t know anything about The Phantom yet, but based on its boxy design and the fact that it docks with The Ghost, I’m guessing it’s supposed to be more of a shuttlecraft than anything else. It sits one Minifig in the cockpit and there’s room in the back for the droid, but even then it’s some cramped quarters. Now, I’m not saying I don’t dig it. Not all spacecraft need to be sleek fighters, and I think there’s something cool about this sort of workhorse style ship. I’m not sure if this LEGO version accurately represents the scale of the ship in the show, but I’m guessing it may have room for more passengers. But maybe not. Let’s take a quick look at the features and I’ll point out a few improvements I would have liked to see. 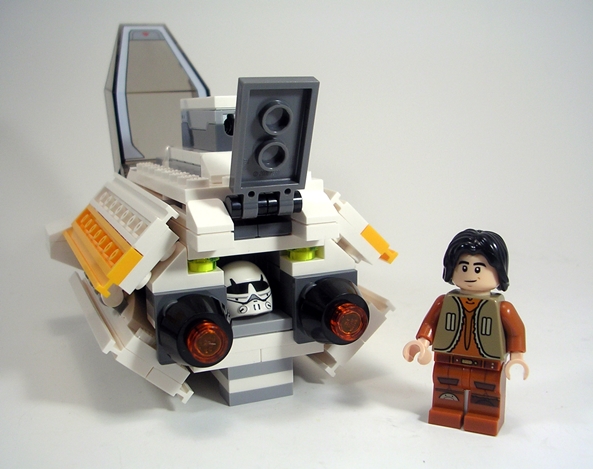 The back hatch opens up and offers a tiny bit of cargo space to store Ezra’s gun and helmet. I think a sticker for the hatch would have been nice, otherwise this is a cool little feature.

The top lifts off to reveal the compartment for Chopper. Again, there’s not much room in there. You just drop him in and close it up again. I really would have liked to see the top hatch hinged or something. Having to dig the top piece off is a pain and some kind of proper opening hatch would have at least explained how Chopper gets in there. Again, I think this goes back to the actual ship being bigger than this LEGO version. 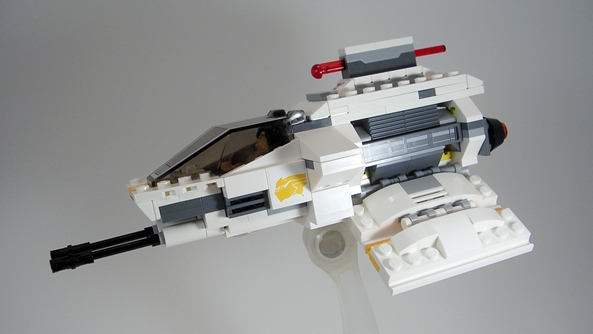 The side panels of The Phantom fold out and angle downward for flight. It gives the ship a slight Imperial Shuttle look, which I’m sure is what they were going for. The fact that the wings are just rectangular plates doesn’t do much for the design, but again, I don’t think this ship is intended to be all that flashy.

The top of the ship features a spring-firing missile, or maybe it’s a proton torpedo. You get two of them and they fire simply by pulling them back and letting them go. On the one hand, it’s a bit of an improvement over the flick-fire system, but on the downside, the missile doesn’t lock in there so it winds up spilling out when I’m swooshing the ship around the room. Yeah, I swoosh. You got a problem with that?

This set is priced at $25, which feels about right. I think it’s the same price point as the A-Wing Fighter that I built late last year and this one is certainly bulkier and comes with more articulated parts. Taken on it’s own I like the Phantom well enough, although I’ve got to reserve some judgement until I see the ship in action in the show. I believe Hasbro is also making a 3 3/4” scale version of this thing, so I very well may pick that one up too. In the meantime, I’ll also have to grab the LEGO version of  The Ghost, so this little guy will have somewhere to dock.