My Hot Toys shelves are mostly populated by Marvel figures, but it’s a bit of an eclectic mix from the various films. I was a little late to the party when the Avengers figures were first released and while I was able to finally secure some of them, many others are only available now on the second-hand market for a lot more than I’m willing to pay. One of those figures was Loki and so I was able to take the opportunity of this Thor 2 release of the character to finally get him on my shelf. Sure, this version comes sans his “reindeer games” helmet and Chitauri Spear, but the rest of his costume is more or less the same, so this release made for a good compromise. I often do these Sixth-Scale features in two parts, but since he isn’t overburdened with accessories, I’m fairly confident that I can do Loki all due justice in just the one. 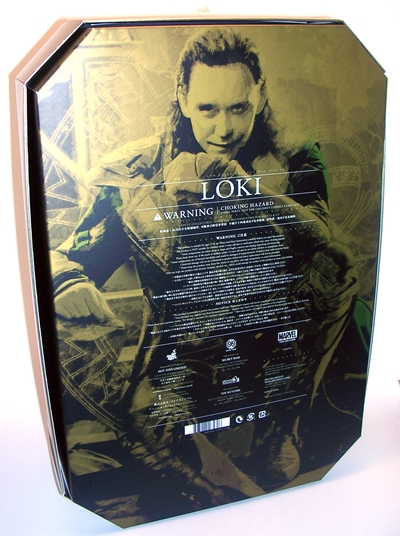 The presentation is surprisingly different from what we’ve been seeing in the Hot Toys Marvel line. The Avengers presentation felt rather utilitarian, whereas the Dark World figures come in this rather flashy style box with a semi-foil finish and obviously based off the design of Mjolnir. It’s a bit bigger and bulkier than it need be, but I still like it a lot and I think it reflects the high price of the collectible better than The Avengers packaging. But that’s not to say it’s any more complex. On the contrary, it’s actually a lot simpler. There’s no flap to open and tray to slide out. It’s basically a shoe box. Lift up the top and there’s your figure in his tray. 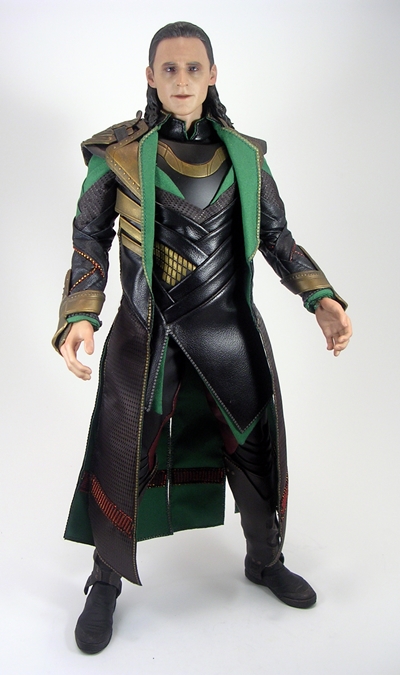 And here he is! Loki comes right out of the box and ready to go. The only thing that really requires set up is the stand, which is similar in design to the other Marvel figures only with a Dark World logo and “Marvel” boxed out in red. By now the costume should be readily familiar, as he’s worn the same basic thing in three movies with the main difference here being the lack of his iconic horned helmet. I’m sure there are subtle differences in the Dark World costume design, but I can’t readily pick them out and that makes him a versatile figure. He works fine for me as a Loki from any of the films and that was why I got him. After all, Dark World was a decent film, I enjoyed it a lot, but for me it was definitely the weakest of the Marvel movies so far, and I didn’t have a desire to own a Hot Toys figure that pays respect solely to that film. 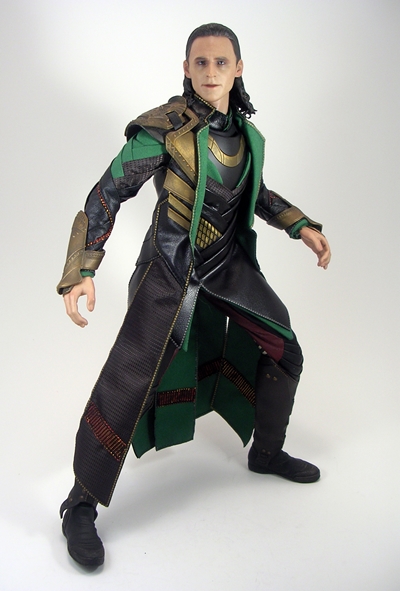 The tailoring of Loki’s costume is gorgeous. The garment is a complex mix of different textures and materials all layered on top of each other. You get a rich, hunter green fabric with bronze stitching, you get beautiful brown fabric with a stitched diamond pattern, you get black leather-like material and also some bronze armor pieces with sculpted rivets. All of that is layered onto a black and bronze plastic breast plate. What’s really impressive is that even with all these layers and the breast plate and shoulder armor, the entire ensemble isn’t at all bulky. Quite the contrary, it’s a beautiful fit giving Loki a trim profile and it’s a lot less restrictive than many other Hot Toys costumes. The instructions warn you not to try to take the costume off the figure and that sounds like pretty damn good advice because I wouldn’t even know where to begin if I wanted to.

Moving on to the portrait, this obviously isn’t Hot Toys’ first crack at the Tom Hiddleston likeness. Hot Toys is a company that is constantly advancing and when they do subsequent versions of characters, there’s usually notable improvements made. Unfortunately, I don’t think that’s the case here. Don’t get me wrong, this is still a very solid head sculpt and a good likeness to the actor, but based on in-hand pictures (not Hot Toys own official pictures) Dark World Loki doesn’t represent a big leap forward over The Avengers Loki. It’s more of a sideways shuffle. I do like the expression, which has the hint of a smirk that suits the character so well, but then The Avengers Loki had a great expression as well. 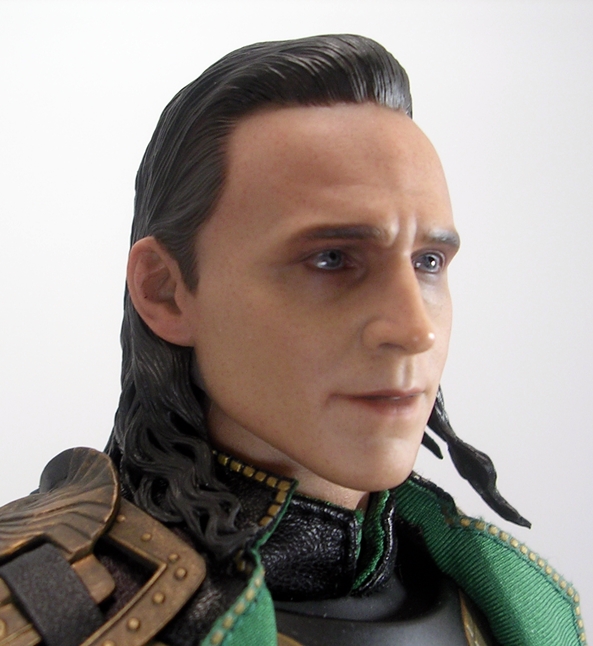 While the likeness is there, I think the complexion is tad off under certain lighting. The skin tone, while eerily realistic, strikes me as being a bit too dark under normal room lighting, while looking much better under bright studio lights.  There’s more darkness around the eyes too, which, on the other hand, I think tends to look better in person than under studio lighting. Maybe Hot Toys took The Dark World title a little too literal. These aren’t crippling complaints, I’m still quite pleased with the likeness, but if you already have Avengers Loki and were concerned that this release would render your figure outdated, you can rest easy because that’s not the case.

And that brings us to accessories. First off, Loki comes with the usual array of extra hands. You get a pair of clenched manacle hands, a pair of relaxed hands, and a pair designed for when he’s holding his dagger. By now most of you know that I’m not someone who tends to swap out the hands on these figures a lot, but in this case, each of Loki’s pairs serves a very specific purpose and I like that. Apart from the hands, you really only get two accessories. 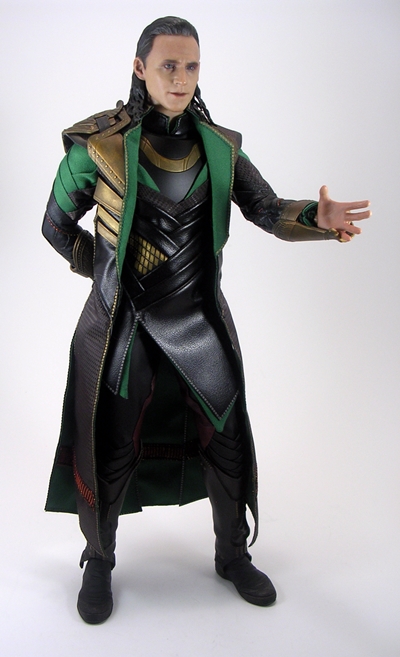 One is his little dagger and the other is the set of manacles we see him in at the beginning of the film. It sounds like a pretty paltry inventory, but it should probably be qualified by two things. One, there’s not much else I can think of to give him. Obviously there’s The Aether, but that was exclusive to the Sideshow release, which surprisingly enough sold out rather quickly. I’ll concede that as an Infinity Stone, it would be a cool item to have, but I thought it was the lamest of all the Marvel Movie Macguffins, so it certainly wasn’t a crucial item for me. 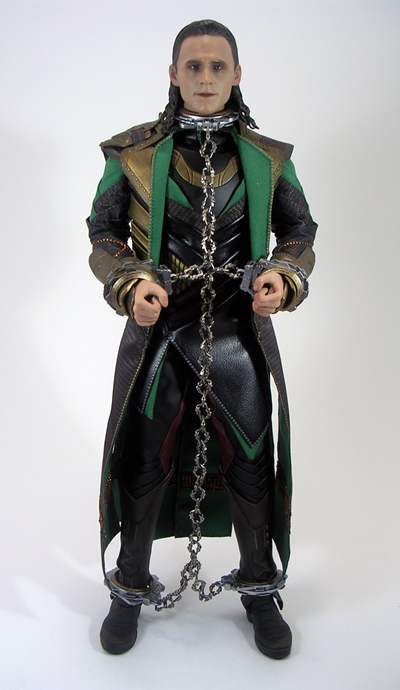 The second point is that Loki’s other accessory, the set of manacles, is a pretty complex accessory. It includes elaborately sculpted and painted cuffs for his wrists, ankles, and neck and the individually sculpted links for the chain that attaches it all together. The cuffs themselves are beautiful and even include teeny-tiny runes etched on the rings, presumeably to bind Loki’s power. The Avengers Loki came only with a pair of wrist manacles and from the look of them, the cuffs were not as detailed as these are.

There are no moving parts on any of the cuffs, instead they’re applied by popping off the appropriate appendage, slipping the cuff on and reapplying the hands, feet, and head. Everything fits quite well and it looks very cool on the figure. Obviously the problem here is that no matter how cool this accessory is, not every collector is going to want to display the figure with the manacles, and if you don’t than this truly is a bare bones release with only a tiny dagger to display with.

Originally, I wasn’t going to use the chains at all. My original plan was to give him the Chitauri Spear that came with my Bruce Banner. But then I thought that since he’s going on my Avengers shelf anyway, it would be kind of cool to have him standing in the backgroud subdued in front of the victorious team, and that’s the route I went for now. 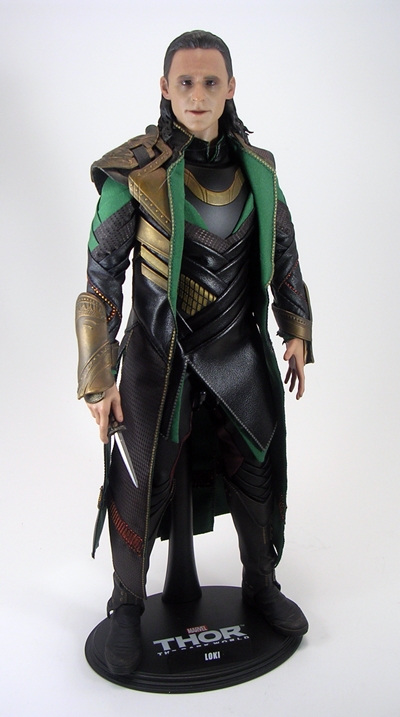 Overall, I’m suitably impressed with this figure, but I’m still going to wrap things up by bitching about the price. At $230 Loki feels really inflated for what is a pretty basic Hot Toys release. I don’t want to knock all the great work that went into the costume and the set of manacles, but when you compare him to other figures in this price range, the value doesn’t seem to be quite there. Sure, $220-230 seems to be the new sweet spot for Hot Toys releases these days, but they are still releasing the occasional figure at the $200 price point too (Spider-Man, Black Widow, and Bruce Banner instantly come to mind) and I would have been a lot more comfortable with the value here at that level. In the end it feels like Hot Toys was just banking on the wild popularity of the character, and the high after-market value of The Avengers Loki, rather than price him out more appropriately, they decided to goose him knowing that he’d still sell. 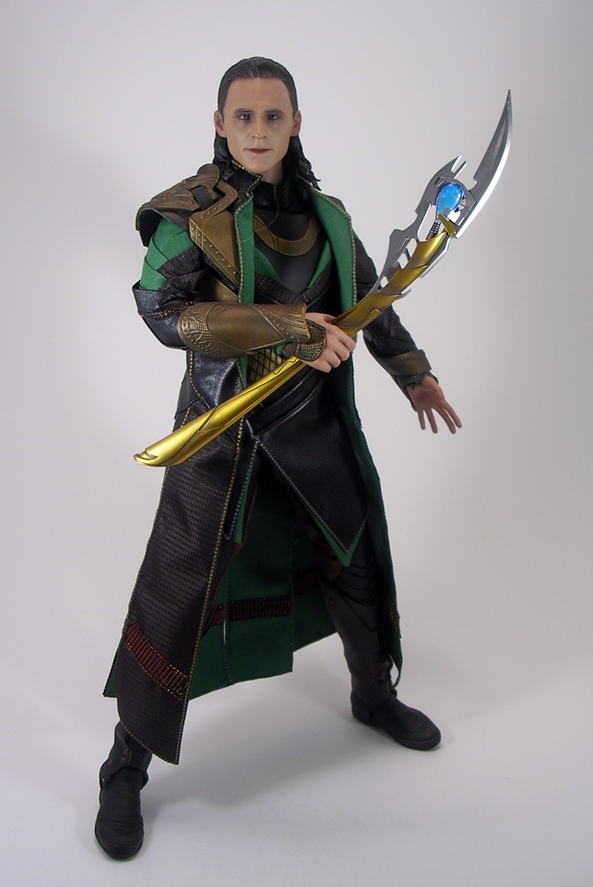 And you know what? They were right… because there he is on my shelf… and I’ve got no regrets.