A few days ago I got the shipping notice for my subscription figures from Matty and that made me realize that I still haven’t featured one of the August figures yet. That’s nothing against Flutterina, I’m actually quite excited to get most of the “Princess of Power” figures, but it’s been a crazy couple of weeks for me and she just got lost in the shuffle. To remedy the situation, I’m bumping my usual weekly Marvel feature to squeeze Flutterina in before my September figures show up. 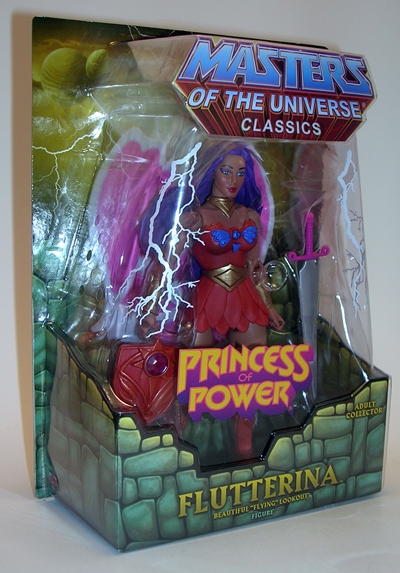 And there she is in the package and there’s really nothing new to say here. It’s the same old Greyskull inspired deco still looking as awesome as ever. Flutterina features the “Princess of Power” sticker on the bubble and for the life of me, I can’t remember whether she was part of Club Eternia and Etheria, but I think she came from Eternia since Madame Razz was the Etheria offering last month.

The back of the package has her little bio, which is pretty interesting stuff. I always presumed she was born with those wings. And apparently she wound up shacking up with the “new” Man-At-Arms in Eternia. Is that the dude that replaced Duncan after he was turned into a Snake Man? Gosh, this MOTUC canon can be confusing! Anyway, you also get a shot of some other figures from the PoP side. Odd that they show original She-Ra and not the Bubble Power She-Ra that came after. Either way, the only figure I’m missing from that lot is Bow and since I’ll be getting his horse as part of one of my subs, I probably should get around to picking up that figure before he gets any pricier on the secondary market.

Flutterina follows the usual She-Ra formula with a one-piece dress and skirt made of soft, pliable plastic and layered onto the figure. In this case her outfit is orange-brown in color and features a cool scaled pattern on the skirt and some additional decorative fixtures on her chest. She has a metallic gold choker, belt, and a matching set of arm bracers, and some nice sculpted decorations on the fronts of her boots. I think my only gripe here is that her costume should be more colorful. I seem to recall the top and skirt being different colors on the vintage figure and I think that would have helped make this Flutterina a bit more visually appealing, but overall I still like her costume well enough.

The portrait is very much in line with what we’ve been seeing out of the PoP figures. It’s a decent sculpt and fairly attractive, but the features on the PoP ladies’ faces do all seem to have a bit of a sameness to them. I do like Flutterina’s hair a lot. It’s a striking shade of purple and it flows down behind her shoulders beautifully. Too bad it’s at odd with the wings. And speaking of wings… 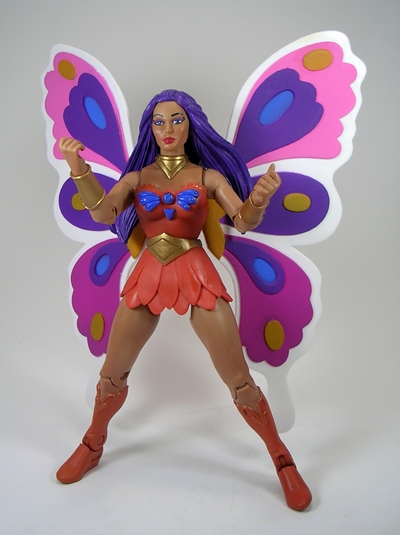 Flutterina’s wings attach to her back via hinged pegs and it’s a bit of a pain to get them on properly. I do recommend some care when removing them from the package as it looks very possible for the paint to rub when sliding them from the sleeve. The pegs are meant to pass through the parts in her hair, but I found it easiest to just pop the head off, get the wings on, and pop the head back on. The wings are made out of a slightly flexible plastic with each of the colorful decorations raised a bit, giving the patterns a 3D look. All in all the wings are a little too thick for me and the paintwork is uneven in some places and the paint lines are not as clean as I would like to see on a $30 figure. I really think these could have been done better with cloth on a frame. As it is, the wings interfere with the head articulation, rendering it practically useless unless you do a lot of futzing with the wings to get them between the strands of hair. Otherwise, if I do try to turn her head, I usually just wind up knocking out one of the wings. That’s a lot of bitching, I know, but let me qualify it by saying that when all is said and done, I think Flutterina and her majestic wings look fantastic on the shelf.

The articulation here conforms to the line’s standards, but just in case this is your first time, I’ll run it down right quick. The arms have rotating hinges at the shoulders, hinges at the elbows, and swivels at the biceps and wrists. The legs are ball jointed at the hips, hinged at the knees, and have hinges and lateral rockers in the ankles. There’s a swivel in the waist and a ball joint in the neck, and I’ve already mentioned that the wings attach with hinged ball pegs that also allow some swivel.

Flutterina comes with two accessories and we’ve seen both of them before. First, you get a repaint of the She-Ra shield that we’ve seen at least a couple of times already. It’s painted a sort of orange-brown to match her outfit and has a purple crystal embedded in it. Secondly, you get her sword, which is the same one that came with Battleground Teela. I’m not complaining, mind you, as this is one of my favorite swords in the line. It’s just a nice, no-nonsense, functional looking weapon, only in this case with a hot pink hilt. 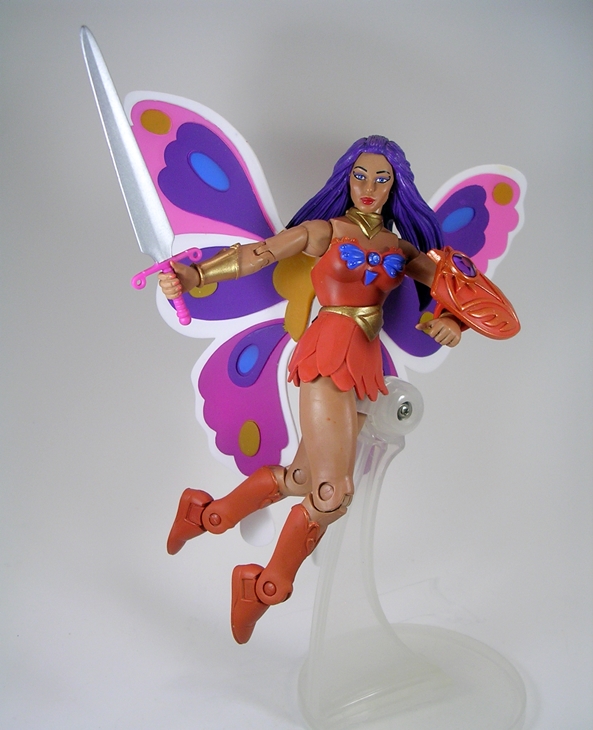 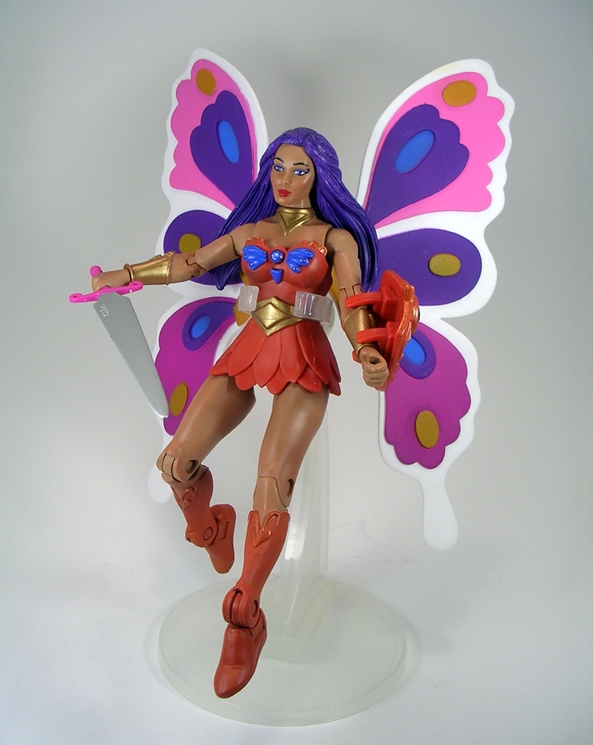 Even after a considerate amount of griping, I gotta say I love this figure. There’s definitely stuff here that could have been done better, but that doesn’t change the fact that she looks mighty nice standing on the shelf with the rest of my Great Rebellion ladies. Flutterina is also a reassuring comeback from the travesty that was Double-Mischief, a figure that holds the dubious honor of being my least favorite release in this entire line. Next up for Princess of Power is Entrapta, and she’s headed to me as we speak, along with Rio-Blast.

2 comments on “Masters of the Universe Classics: Flutterina by Mattel”