When it comes to toy hunting, hitting the pavement has long been a thing of the past for me. I will still sometimes go out of my way to buy groceries at Walmart or Target just to take a pass through the toy aisles, but these days, 99% of my toys come from online retailers. That’s not my choice, but that’s the way things have evolved due to the horrible distribution among the big chains. That having been said, I have been doing some little toy runs these last few weeks and to the strangest place one could imagine… Walgreens! For whatever reason the drugstore chain has decided to edge their way into the action figure market by offering a number of exclusive figures in lines that range from Marvel Legends to Game of Thrones to Star Wars. And they even have exclusive US distribution rights for an entire line of figures based on Doctor Who. Yup, Doctor Who action figures in an American drugstore. I’m still trying to wrap my brain around that one! 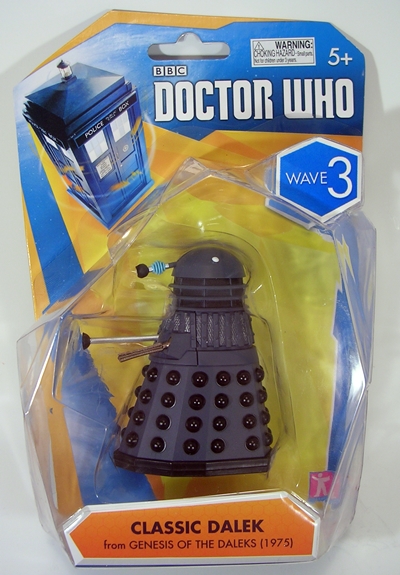 In case you’re confused, what we’re dealing with here is just a rebranded continuation of CO’s 3 3/4” line. Wave 3, to be precise. These appear to be identical to the wave that is being widely distributed in the UK, only with an Underground Toys label slapped on the back of the card. I didn’t have a problem with the old packaging, but I kind of like this style too. It’s bright and colorful and it has an almost kitchy 70’s vibe to it that suits the show I love so much. This wave consists of The 10th Doctor, The 12th Doctor, Amy Pond, an Asylum Dalek, and this Classic Dalek taken from the 1975 story “Genesis of the Daleks.” Why toss in the one Classic figure? I have no idea. Maybe it’s a tie in to the older Daleks that had cameos in “Asylum of the Daleks” or maybe CO just wanted to capitalize on the crazy popularity of Daleks by including them in this new scale. Let’s bust this little hate-monger out of his package and check him out.

Yup, that’s a Classic Dalek alright! And one of my all time favorites, too! The gun-metal-blue and black Daleks that amok during The 4th Doctor’s reign always looked so cold, utilitarian, and extra sinister to me. While a good portion of this 3 3/4” line has been mediocre at best, CO did manage to get the Daleks in this scale right from the start. They’ve done three variations of the NuWho Daleks and every one of them has felt like a shrunk down version of the excellent 5-inch scale figures. Well, the same can mostly be said of this little guy here. The sculpt is completely new and while it lacks a lot of the fancy panel lining and such from the current Dalek design, this little figure is faithful to their appearance back in 1975. 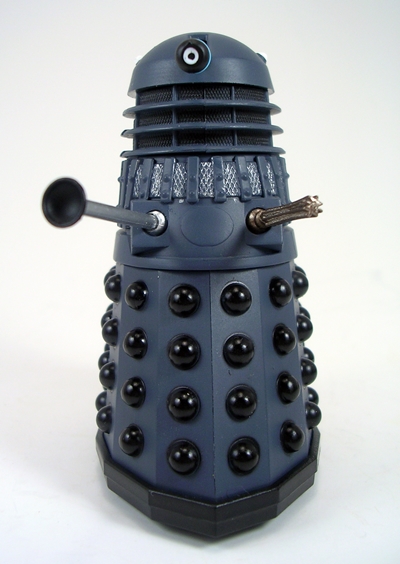 The biggest thing that sets this guy apart from his 5-inch cousin is the ear lights. Instead of using clear plastic like they did for the 5-inch figure (and even the 3 3/4” NuWho Daleks) the ear lights here appear to be part of the dome and just painted over white. The ears are also the only part on this Dalek where the paint isn’t quite all it could be. It’s not terrible, but there is a bit of slop and rubbing. The rest of the paintwork is quite good and they even got some silver spray on the mesh in between his shoulder slats. Cool!

If you own any of Character Options’ Daleks than you should know what to expect when it comes to articulation. This little guy rolls along on three wheels under his skirt. The back two wheels are fixed and the front one spins 360-degrees. Both the gun arm and the plunger arm are each mounted on ball joints, the eye stalk can raise and lower, and the dome will rotate 360-degrees. It’s basically all the articulation you can hope for in a Dalek.

And that opens up the debate on whether or not all Classic Who is now fair game for this smaller scale. It’s true that this line doesn’t really impress me, but the idea of having Doctor Who figures that are more compatible with many of my other playsets and figures makes me a little more forgiving than I should be. It also leads me to be perfectly honest and admit that if CO were to start releasing the Classic Doctors in this scale I’d be all in, but that probably goes without saying. Right now, it could just be that CO recognizes the repaint potential of getting a Classic Dalek mold into the mix. Either way, I’m very happy to have this little guy in my collection.

I found this Dalek just lying on the shelf of a Walgreens that I was visiting while on the hunt for Marvel Legend’s Agent Venom. There didn’t appear to be a peg for the Doctor Who figures and there weren’t any other to be found. Nonetheless, I scooped him up. The price was $9.99, which is about what these figures have been selling for through my regular Doctor Who retailer. Right now he’s just a lone curiosity among my Who figures in this scale, but I’ll be on the hunt for the rest so if luck is with me, it’s very possible a few more of these Daleks will follow me home.