Back when Hasbro first unveiled their Star Wars Black 6-inch line, there was a lot of speculation as to whether or not there would ever be any vehicles. Now that speculation can end because we got one! Even if it may be the only one (that still remains to be seen), the Speeder Bike seems like the perfect way to get a vehicle into the line and bundle it with a figure too! I’ve been particularly excited to get this set in hand to see how it turned out, mainly because I bought a case and got two of these along with the Deluxe Jabba the Hutt.

The packaging is a very simple, no frills window box. Like the boxes for the individual figures, the presentation here is as minimalist as you can get. There isn’t even any writing or art or anything on the side panels or the top. Yup, pretty boring. On the other hand, it’s a confident move to let your toy speak for itself, and that’s exactly what the huge window is doing here. I do find it interesting that the set is called “Speeder Bike with Biker Scout” as if it’s the figure that’s the accessory. I think most would have figured it to be the other way around. Either way, both pieces come on a clear plastic tray with the Scout seated on his ride and held in by rubber bands. I’m a little worried about the dreaded Pre-Posed Warping Syndrome. I can’t wait to bust this thing open and get them out! Oh yeah, the box is totally collector friendly so long as you’re careful clipping all those rubber bands and don’t mangle the tray. Let’s start with the figure… 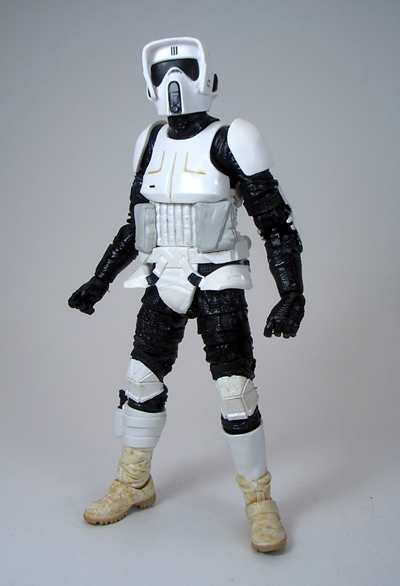 My rule of thumb when evaluating the 6-inch Black figures can be summed up with, “is it an improvement over the best of the 3 3/4” versions and thereby does it take advantage of the upscale?” In the case of the Biker Scout I would have to say… yeah, sort of. It’s not a huge leap forward, but it I think it does take advantage of the larger size to deliver a marginally better sculpt then what we’ve had in the past and definitely better articulation. Most of the improvements in the sculpt can be found on the back of the belt and the armor for the arms. The underlying body suit also has a more intricate texture. I also like how the shoulder hinges are no longer visible through the shoulder armor. The treads on his boots are particularly impressive. I’ll confess you have to scrutinize this guy quite a bit to find the stand out differences between him and his smaller cousin, but there are some there to be found.

Obviously the bulk of the deco here consists of white armor on a black body suit. The figure does make some use of weathering and panel lining. The weathering mostly consists of some dirt on his boots and a little more of the same color on his chest. I’m kind of torn on whether or not I would have preferred him clean, but what we got certainly looks fine. The rest of the paint hits are used to pick out detail in his armor and it’s all executed with precision. I think my only quibble would be that I wish the black used for his visor was glossy instead of matte. 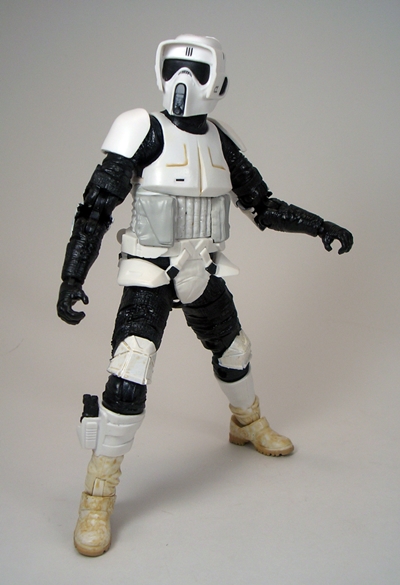 As for that articulation, I’m happy to report that my Biker Scout doesn’t suffer from any mushy joint syndrome, nor did any of his joints get warped or deformed from being packaged seated on the bike. The arms feature rotating hinges in the shoulders and wrists, swivels in the biceps, and double hinges in the elbows. The shoulder armor does inhibit the movement there a bit, but it’s not terribly restrictive. The legs are ball jointed at the hips, have swivels in the thighs and tops of the boots, double hinges in the knees, and the ankles have both hinges and lateral rockers. There’s a ball joint just below the chest armor and the neck is both ball jointed and hinged. 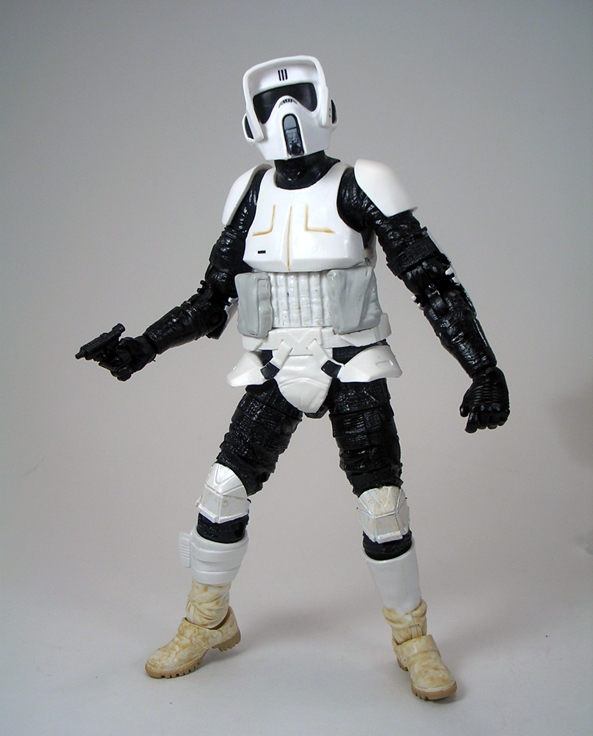 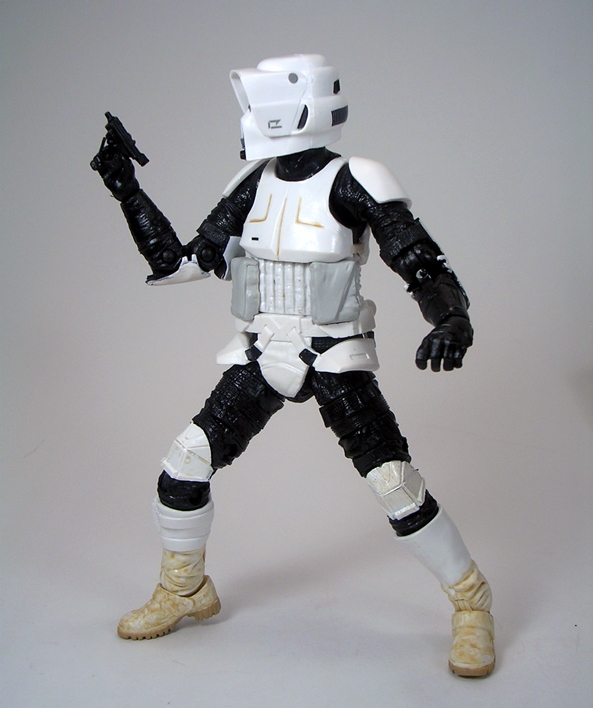 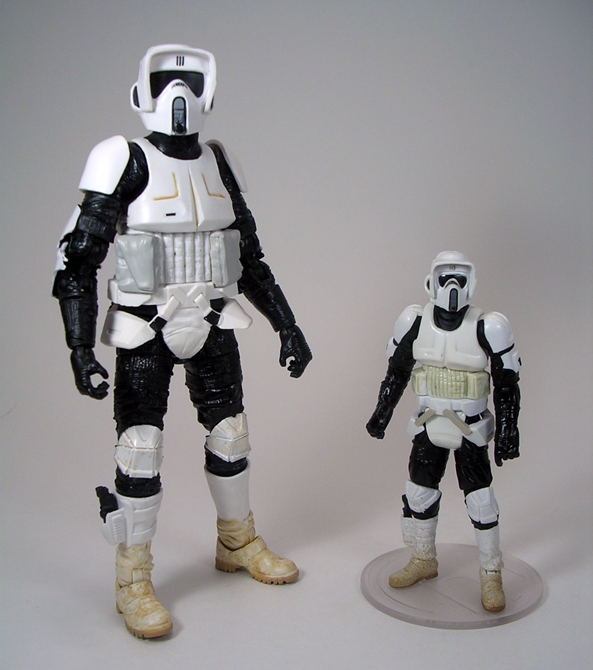 On the downside, his gun is a little piece of shit. I think it’s undersized, but that could be just me. The first time I put it into his hand the trigger guard snapped because it’s just weak soft rubber. It still looks alright in his hand, but paying good money for something from a “collector’s line” only to have a part break right out of the box is not my idea of fun. I’ll have to be more careful with the second one when I open it.

Moving on to the Speeder Bike, I’d say this piece is a bigger departure from the 3 3/4” version but mainly because it’s a far more static piece. There are some small improvements to the mold, but this piece also takes a few steps back. There are hinges on the air brakes, but they only allow for a little movement. The undercarriage blaster can still swivel, but those two examples are the extent of the articulation on this thing. The pedals are fixed into place (although they will pull out as they are just tabbed into the bottom) as are the handlebars. On the plus side, I expected this thing to be really soft and bendy and I’m happy to report that’s not really the case. Only the handlebars suffer from soft plastic and it’s not really an issue when the figure is holding them, only when the bike is unoccupied. The deco gets by mostly with colored plastic, although there are some silver dry brushed weathering effects here and there, which are only moderately convincing. 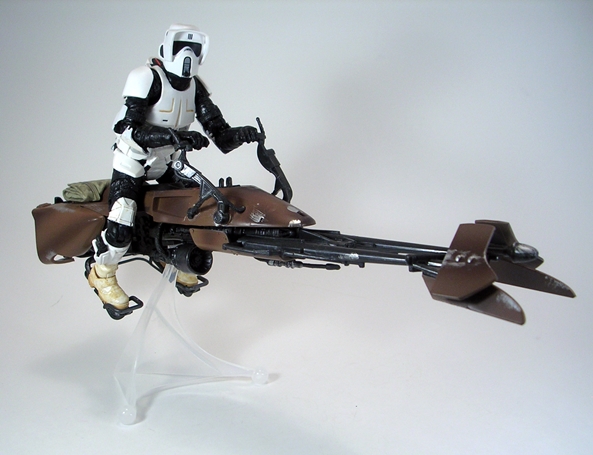 I’m not sure if this will make sense, but this Bike feels more like a prop than a proper 6-scale replica of the Bike. Upscaling the Speeder Bike to the 6-inch range offered lots of opportunities for more intricate moving parts and better defined instruments and such and sadly those opportunities are missed here. That’s not to say, however, that it doesn’t look good because it certainly does. What’s more, the Biker Scout looks fantastic when riding it, thanks to his excellent articulation and the addition of foot pegs on the pedals. 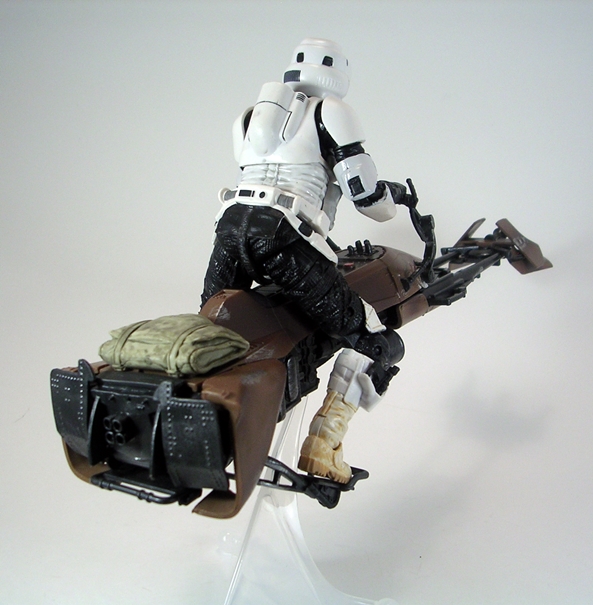 The stand is a frosted translucent cheap piece of rubbery plastic, but damn if it isn’t clever. When I first set it up I was pissed because it seemed like the only way to display the bike was in elevated flight. It took me a few minutes to realize that the other two ball joints work as well. You can plug any of the three into the bottom of the bike and the irregular triangular shape of the stand makes it so that you can display the bike at different heights depending on what side you flip it onto. I was happy to see I could achieve the parked levitating look with the Scout standing beside it. 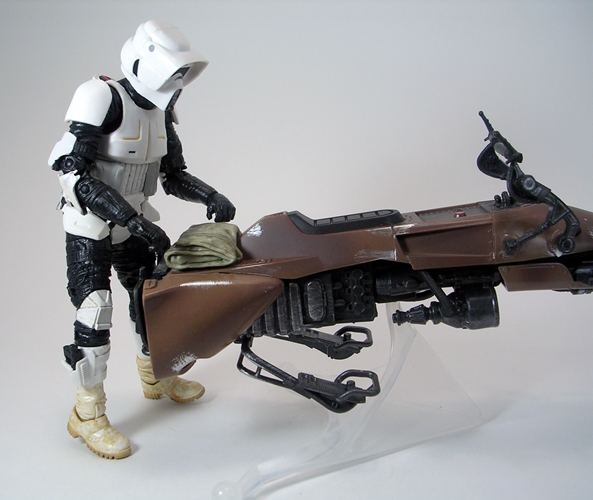 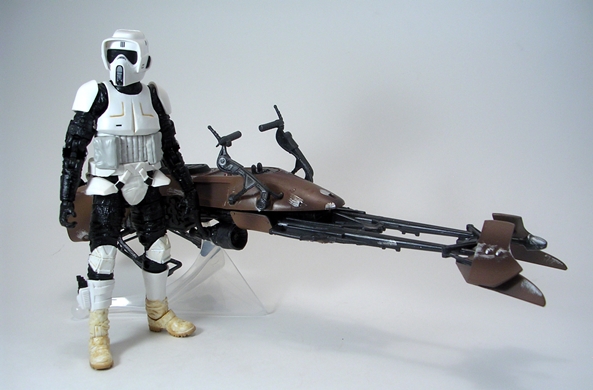 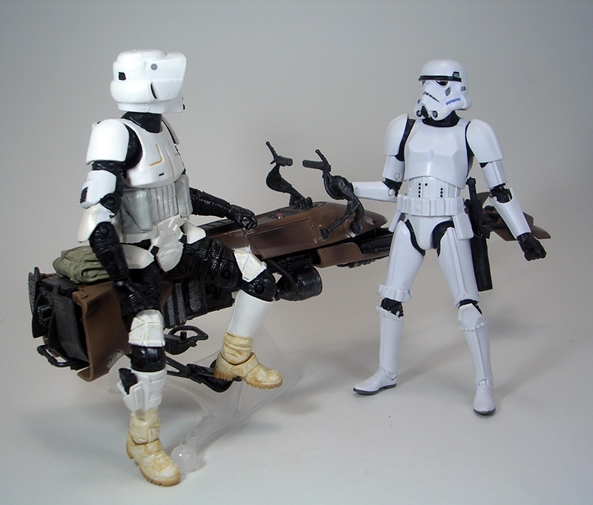 Both the Speeder Bike and the Biker Scout are very nice pieces and I’m very happy to have them in my growing 6-inch Black collection. They are not, however, toys that take full advantage of the collector’s grade potential of the larger scale and higher price point. At about $40 for the set, I’d say this box is definitely worth the money. The 6-inch Black figures generally retail for twenty and it’s easy to see where another twenty bucks went into the bike for plastic, tooling and paint. I’ll admit to having lowered my expectations of this line a bit since the initial wave came out, but that’s not to say that I’m not appreciating and enjoying these figures.