So, it’s been a whole year and now my Feral Cons are finally complete. It’s time to get these guys combined and see just how impressive Feral Rex (aka Not-Predaking) actually turned out. Transforming these guys into their component parts holds no real surprises. The arms and legs are more or less the beast modes with the legs folded in, and some other tweaks and bobs, and the torso is Leo Dux with his legs and shoulders acting as connecting points. It’s very Voltron-y in it’s flavor and as a result the combiner transformations feel pretty natural if you’re already used to bringing each of the figures from their robot to beast modes and back. Like his G1 inspiration, Feral Rex features some parts-forming. The backpack weapons that came with Bovis and Fortis are used for the hands and feet and the shield used for Leo becomes the groin. And obviously, Talon’s wings are removed to be placed on the back. It’s no more time consuming then you might expect transforming five different figures to be and it certainly goes quicker for me than forming Fansproject’s Causality figures into Not-Menasor. And the results… well, the results are pretty tough to argue with… 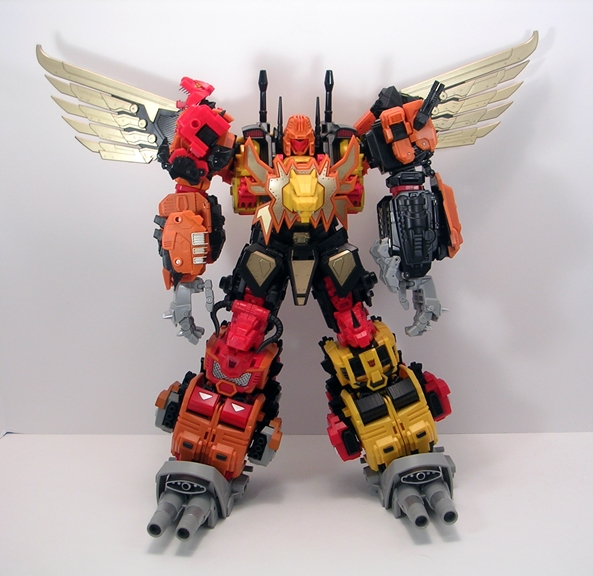 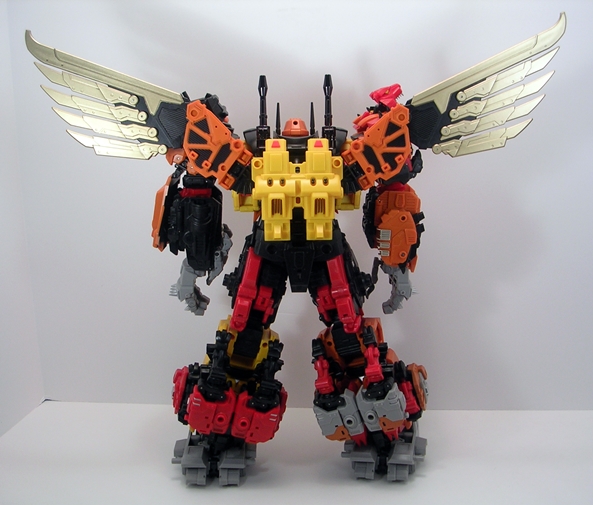 Magnificent is the word that comes instantly to mind. From a design standpoint Feral Rex certainly satisfies the updated G1 Predaking aesthetic that I was looking for. Rex hits all those points that make the original toy design so damned iconic. You get the same dual cannon toes in each of his feet, Talon’s wings coming off the back making him look like a giant angel of death, and you can’t beat those bull and rhino head kneecaps. Leo Dux’s lion head is worn prominently on the chest and the groin armor has the same gold plated bling that all giant robots wish they had on their crotches. Of course the main difference in Rex’s aesthetic is that all of these iconic points are applied to fully realized proportions and that’s the most amazing thing about Feral Rex. It doesn’t feel like anything was compromised to deliver a truly awesome looking figure. 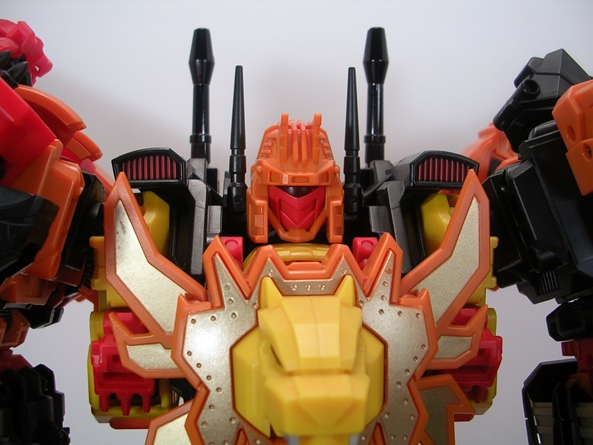 The head sculpt is fairly simple but still excellent. I love the detail put into his “helmet” and I do believe there’s an LED in that noggin to light up his visor, but I’m not going to mess with installing batteries at this point. It’s a nice bonus feature that I may make use of at some point. I should also note that the cannons that rise up from Rex’s back can be angled forward to give him some extra firepower. You do have to remove Talon’s wings to do it, but you can snap them right back on once the cannons are in firing mode. 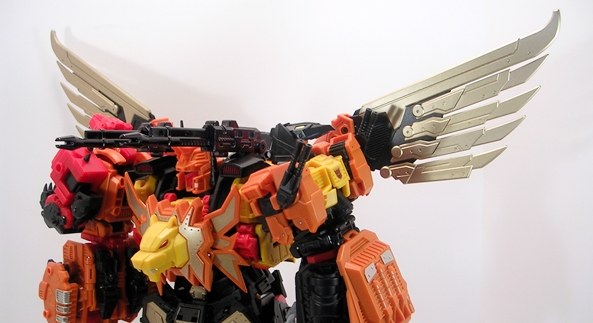 Of course, one of the key failings with a lot of combiners is their overall fragility. A combined mode can look great, but if it falls apart when you touch it… well, that’s no fun. But Feral Rex is damned solid. The connection ports lock quite well so there’s virtually no chance of limbs accidentally disconnecting when you’re playing with him and happily they aren’t too scary-tight to pull apart either. What’s more there aren’t a lot of bits to fall off, which was one of my primary gripes with TFC’s Uranos combiner. The only exception is the wrap around crotch piece. I have a habit of grabbing the figure from the center of gravity and that usually means putting at least one of my fingers on Feral Rex’s robot diaper, which will indeed make it pop loose. Pick him up from under the arms, and you’ve got no worries. 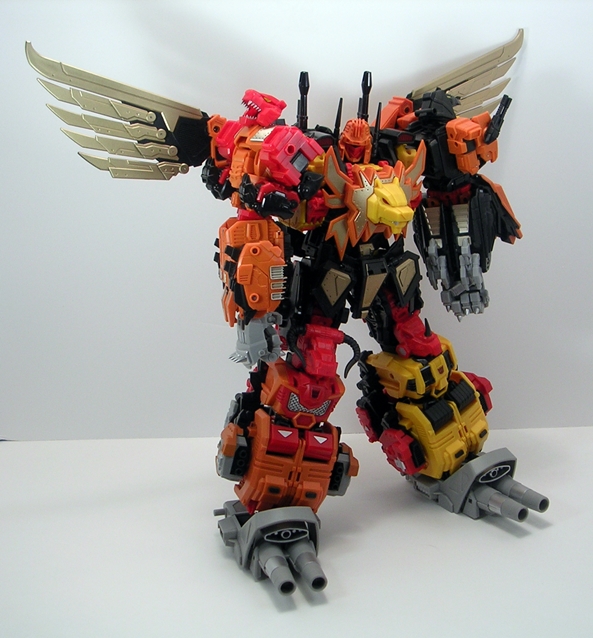 Feral Rex features a good amount of articulation for a gestalt mode. You can get a wide stance out of him and he has nice strong ratcheting hinges in the knees that hold his massive weight with little difficulty. The feet are ball jointed to keep them flat most of the time and the way the connection ports are designed he has a good amount of lode bearing strength in those ankles. His arms do run into some problems where the sculpts interrupt the articulation, but nothing too bad. His shoulders rotate quite well and he has a bit of lateral movement there too. His elbows are hinged and there are swivels, and his fingers are individually ball jointed. He can rotate at the waist and his head is naturally ball jointed too. Standing Feral Rex is quite easy, although he is ever so slightly back heavy. Nonetheless, a little tweaking gets him standing just fine in a variety of poses and while I will be displaying my Feral Cons in their individual bot modes, I wouldn’t be apprehensive about standing him in combined mode as I don’t think he’d be prone to shelf diving. With that having been said, where a $500 toy is concerned, I’d still probably invest in a support stand of some sort. 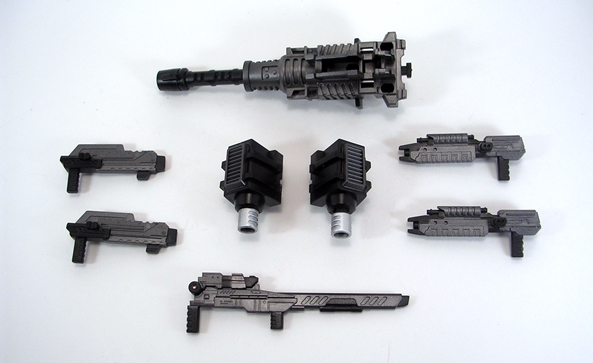 While Rex is perfectly capable of just stomping on his enemies, picking them up and throwing them, or blasting them to bits with his shoulder cannons, he would be lacking without his extra weapons and that’s why he can combine all of the Feral Cons weapons into a giant sword and gun. Let’s start with the gun… 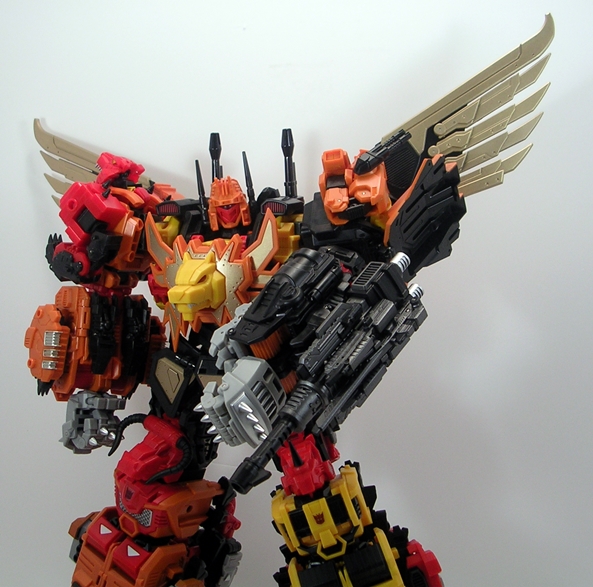 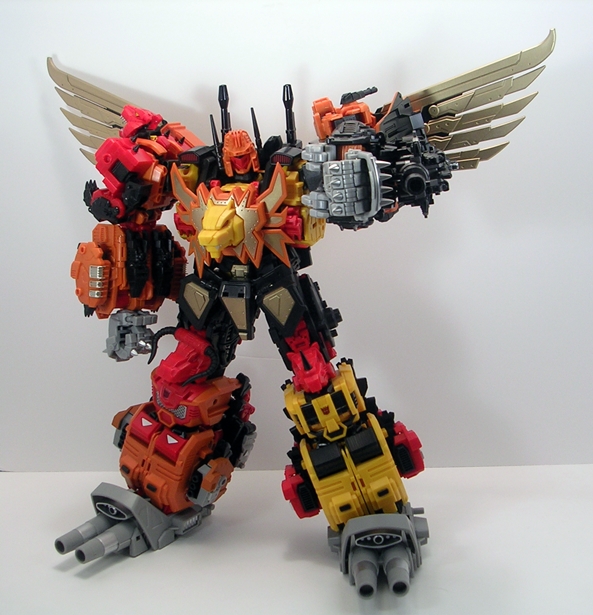 It’s fairly simple to put together and it uses all the guns from the individual figures with Tigris’ being the core of the weapon. Putting it together is easy, but taking it apart can be tough because Fortis’ two guns fit together really tight. When you’re done you get a nice beefy looking cannon that mounts onto Feral Rex’s left arm and it looks pretty damn imposing. I really like the idea of Rex having a gun that still frees up both his hands, because… 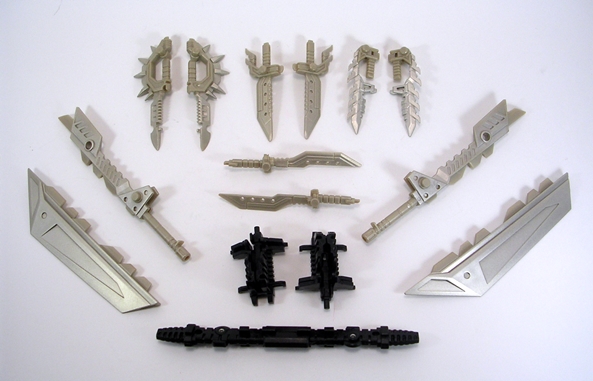 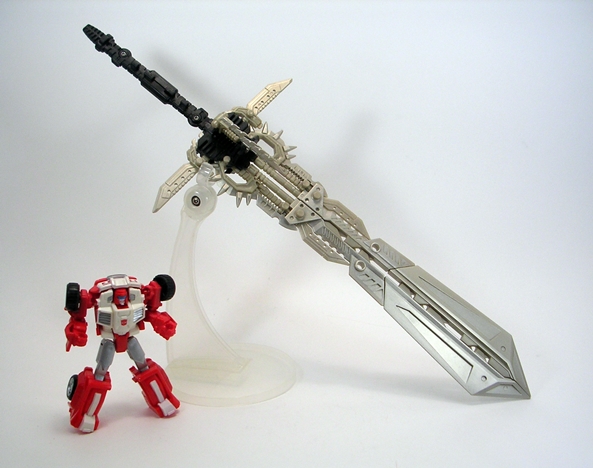 He’s also got that big damn sword! I threw in Legends Class Swerve to convey a sense of scale on this thing. By pooling together all the knives plus Leo Dux’s mace and swords you can build Feral Rex’s ridiculously massive sword. This is a vicious looking design expressing sheer art expressed in the form of giant robot cutlery. And despite it being formed from lots of knives, it holds together with no problems. With the help of some tabs and Rex’s hinged fingers he can hold it securely in either hand and holy crap does he look amazing when he’s wielding it. Between the length of the sword and Feral Rex’s bulk, shooting pictures of him with his weapon really strained the capacity of my staging and lighting area, which wasn’t built with a figure this big in mind. 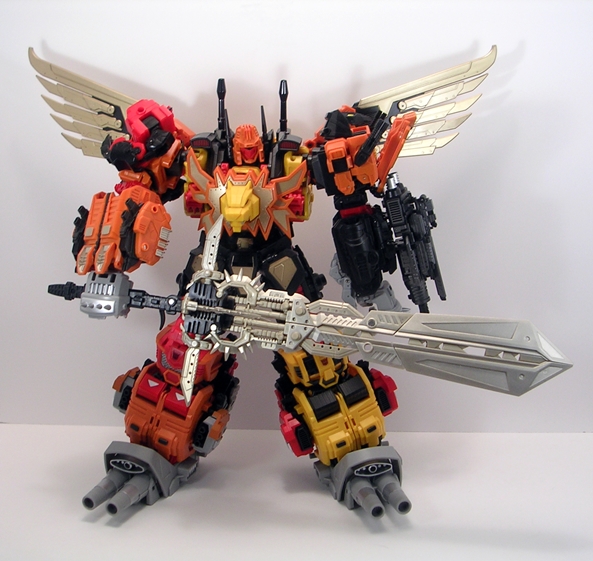 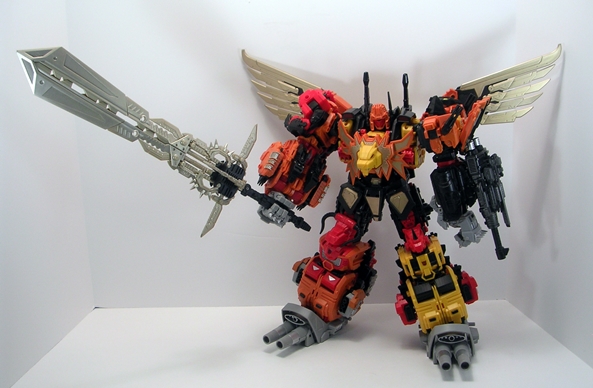 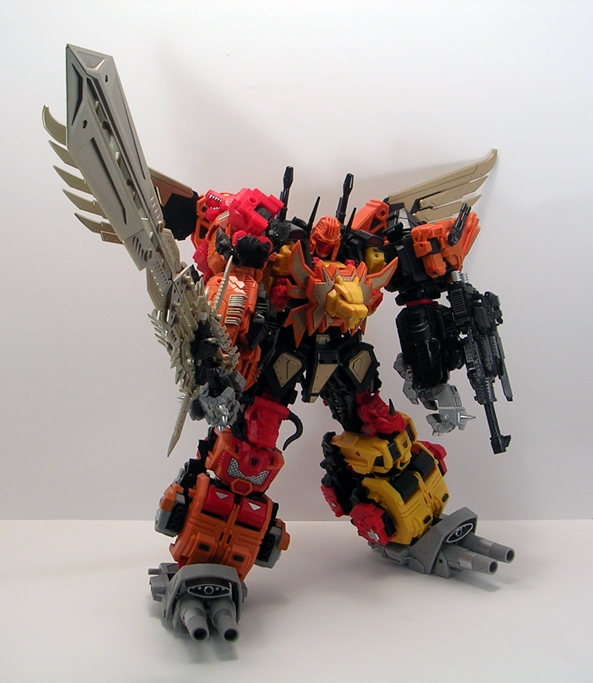 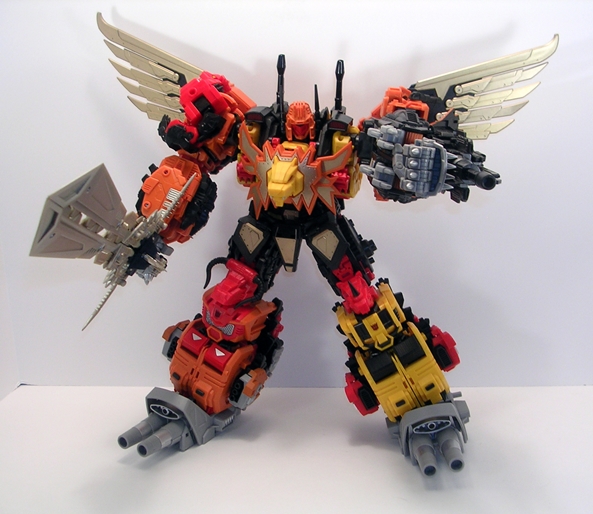 As massive as Rex’s sword is, his joints are up to the challenge. He can wield it in just about any pose I put him in without the arm dropping. I know I ragged on poor Tigris for being scrawny and the runt of the litter, but damn if he isn’t one tough little sonvabitch. His arm mode takes the full weight of that sword without even breaking an energon sweat. I take back everything I said about you, Tigris! You da man!!!

It’s funny to look back to a point when I was struggling to get up the nerve and invest in a Third Party Transformer. Never did I imagine I’d reach a point where I was happily plunking down $100 for a Voyager sized figure, let alone $500 for a combiner team. But that’s a testament to what a fine job some of these 3P companies are producing these days and with the entire Feral Con team now on my shelf, I’m confident in placing Mastermind Creations at the top of the 3P pyramid. Sure, they may be sharing that spot with Fansproject right now, but that certainly puts them in good company. The Ferals represent everything I could have asked for in a set of Masterpiece Predacons. The individual figures are fantastic and the combined mode is stunning and inspired. It literally feels like nothing was sacrificed or compromised in delivering a great team of figures and a magnificent combined mode. 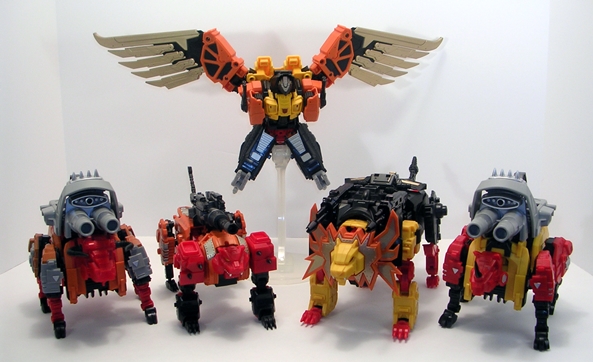 The Feral Cons have represented a quality and well thought out product from the very beginning. Besides looking great and sporting high quality plastic, MMC designed these guys with some wonderful touches. The way the weapons interact with the figures has been fantastic and I love finding new places to stick them on and store them. These toys may be expensive collector pieces, but they are also so much fun to play with. Their transformations aren’t overly complex and never do I feel like converting them is a chore, even when I was combining them for this feature and then changing them into beast modes, and then back into robot modes. There’s nothing about manipulating them that feels scary or intimidating. They’re just plain fun. 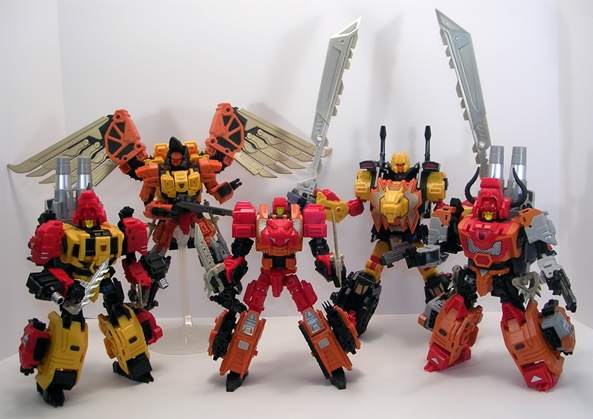 But if I were to pick out a favorite thing about this series it would be how unified the design has been throughout. It must be hard enough designing a single transformer, it must be even tougher making a set of combiners work, but when you can do it and actually make all the figures look like a cohesive team as these fellas do… that’s just so damn impressive to me. This set of figures represents careful planning from the start and some really deft and clever engineering. 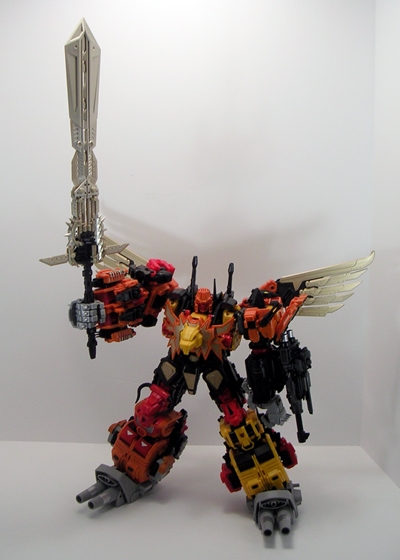 The last thing that I wanted to mention was how awesome MMC is as a company and the fact that they listen to their fans. From the very beginning of this series, they kept a constant eye on the way the collectors received their product. The Ferals have had some minor QC opportunities and by monitoring message boards and collecting specific consumer feedback, they addressed all these issues with each subsequent release. Some people were finding that the gears on Bovis’ elbow joints were getting flattened and so they supplied replacement parts with Fortis… and so on. Even the Completion Kit that came with Tigris was an amazing bonus as it addressed something that I doubt any fans were complaining about (filling in the hollow arm cavities), and supplied some optional parts to improve your toys and tossed in bonus weapons too. It was the last figure in the line. They already had you for $500+ dollars, but they still threw in that lovely little bonus. 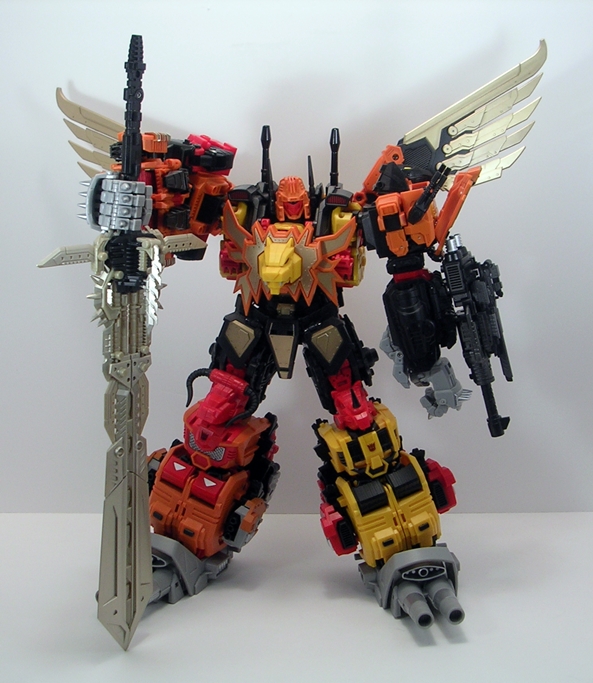 I haven’t decided yet whether I’m going to do a “Favorites and Most Disappointing” list for 2014. I hate doing those. But if I do, it’s hard to imagine me not combining a top slot for Feral Rex. Looking back, I can only say that this was money well spent and I’m happy to let these figures stand in my collection as my Masterpiece Predacons. If Takara wants to take a stab at it, I’ll be happy to take a look, but it’s hard to believe that they could improve on what Mastermind Creations has achieved here. And just as a parting note, I will be revisiting the Ferals one last time in a couple of months when MMC releases the unofficial sixth member of the team… Felisaber!