While October may be almost over, I’m only now getting to the first of three figures that arrived this month from my Matty Subscriptions. They all look like excellent figures, but the one I was most excited about getting in hand was the Club Etheria Exclusive figure, Light Hope. This is an interesting release since as far as I know the design of the figure is completely original. Light Hope only appeared as a shimmering rainbow light thingy in the Princess of Power cartoon, and I’m not aware of the character ever taking on corporal form in any comics. As a result, Matty tasked The Four Horsemen to give him this humanoid form and that is just plain neat. I fell in love with this figure the moment I saw the initial pictures of it, and now that I have him in hand, I’m actually even happier with the way he came out.

Yup, there’s the packaging we all know and love. It features the Princess of Power sticker on the bubble and Light Hope’s tag line on the insert is, “Magical Protector of The Crystal Castle.” I’m not all up on my She-Ra cartoon lore, but if I recall correctly Light Hope basically did on Etheria what The Sorceress did on Eternia. Anyway, I got nothing new to say, so let’s just check out the back and see how I’m doing with my collection… 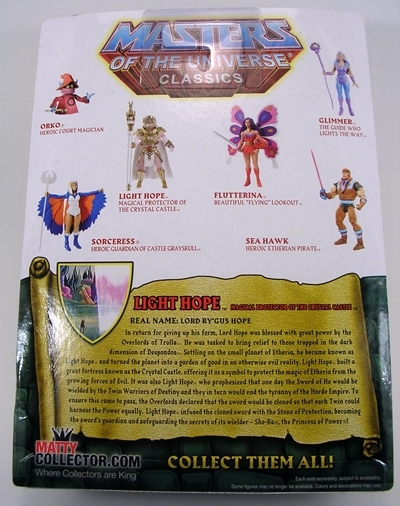 Clean sweep! It doesn’t happen often, but I actually have all the figures pictured on the back. Nice! You also get the bio of Light Hope, most of which is over my head because of my lacking familiarity with Masters of the Universe continuity. As you might guess, I have no real attachment to the character of Light Hope, so this is one of those figures that has me excited based entirely on how completely amazing it looks. 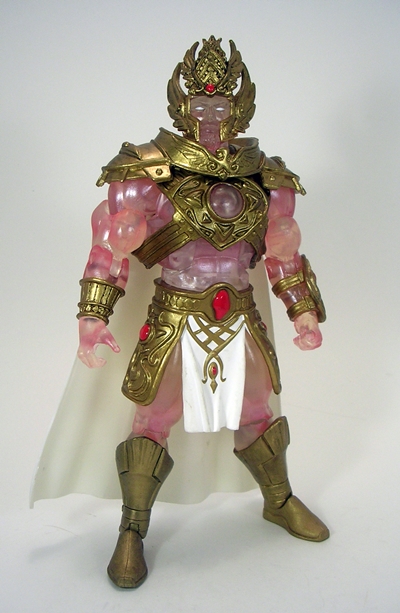 And hot damn, he does indeed look amazing! In fact, I’d dare say he’s a breathtaking figure! Light Hope’s body is cast entirely in a faintly rose colored translucent plastic. It feels like good quality stuff and it retains all the articulation of a regular MOTUC buck. His armor consists of sculpted boots, a belt and skirt, forearm bracers, and chest and shoulder pieces. All the armor is painted in slightly tarnished bronze finish. I like it because it looks somewhat antiqued and I think it brings out the intricate sculpt in the armor a lot better than if Matty had gone with a bright and metallic gold. The armor is decorated with sculpted scrollwork on the thigh pieces and chest and there’s a crystal in the center of his chest that’s cast in the same plastic as the figure’s body.

The duality of translucent plastic and bronze armor is jazzed up a bit with some glossy red paint hits for the stones inlaid on the thigh armor, the arm bracers, the headdress, and the back of his neck, as well as the jewel in the center of his belt. He also has a sculpted white sash hanging down between his legs and a great looking cape that cleverly dips in the middle to allow for some light piping to come through the translucent bit in the center of his chest and back. 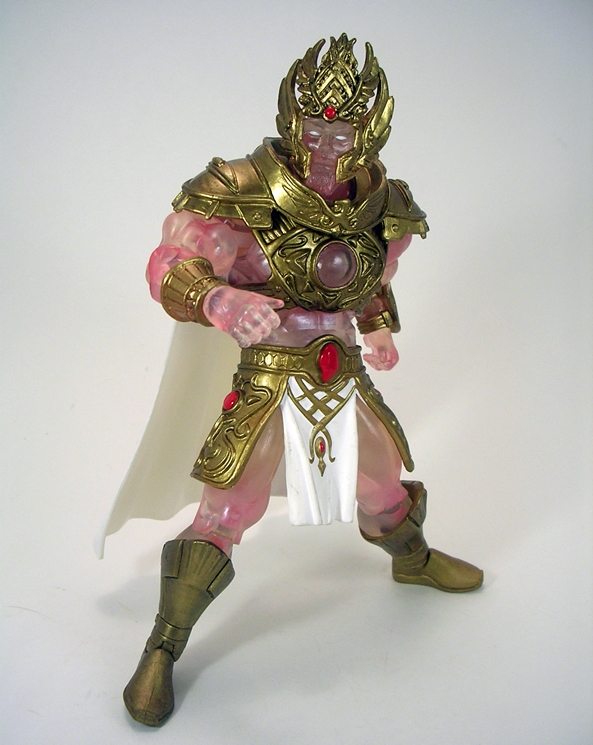 The head sculpt is also cast in the same translucent rose tinted plastic with the headdress painted to match the armor and permanently attached to his spectral noggin. The portrait consists of a noble, bearded visage and while the details are a little soft when you get in close you can make out some nice sculpt work in there as well as the two white painted eyes. The detailed sculpt of the headdress is particularly noteworthy and it really nails the latticework motif that I tend to identify with the Princess of Power designs. Everything about this guy’s armor ensemble looks like it could have stepped out of the pages of Antiquity and I love it! 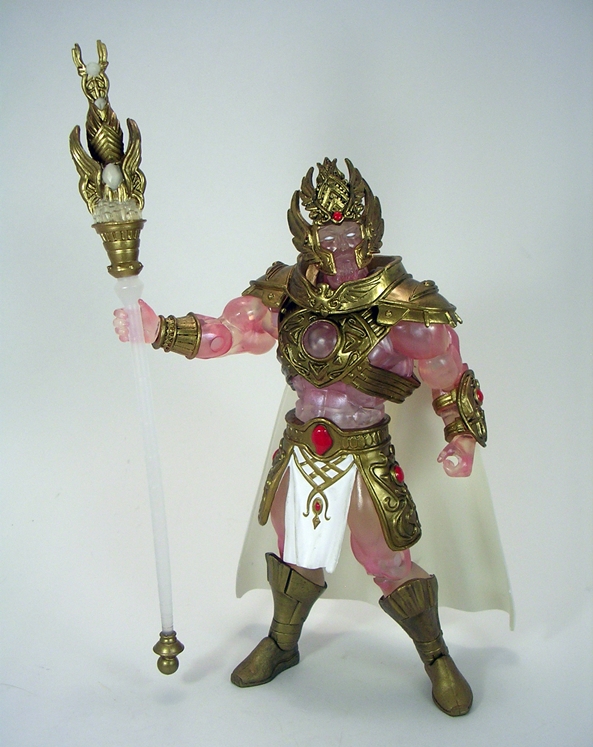 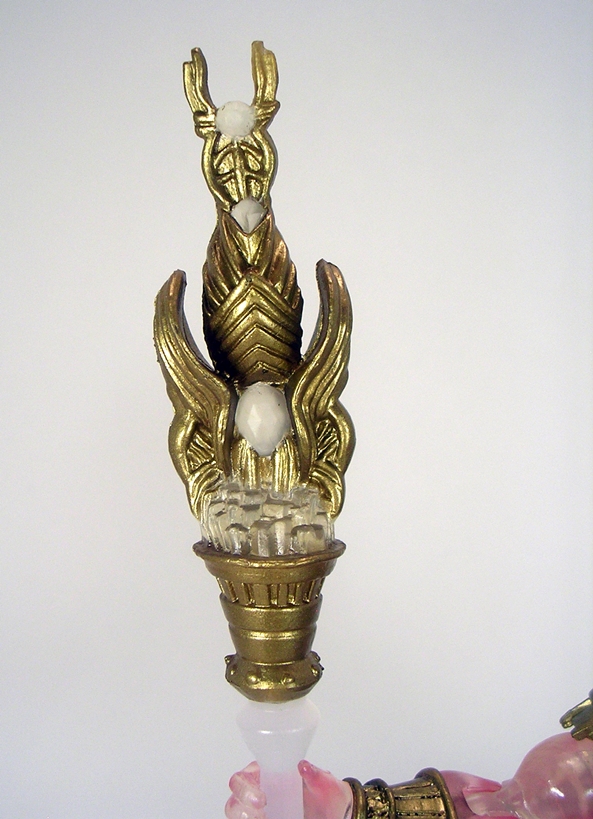 Light Hope comes with a gorgeous staff that comes close to matching the figure’s deco. The translucent plastic used for the staff and the crystals is milky white, rather than rosy pink, but the elaborate top of the staff is painted with the very same bronze finish as the figure’s armor. 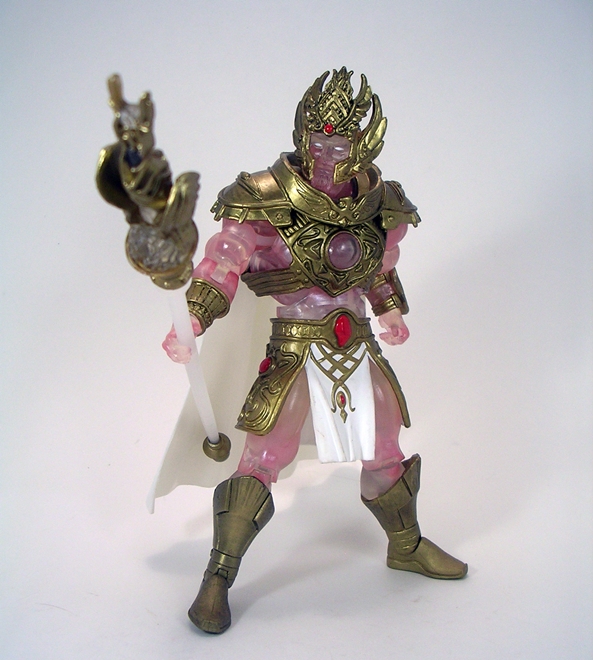 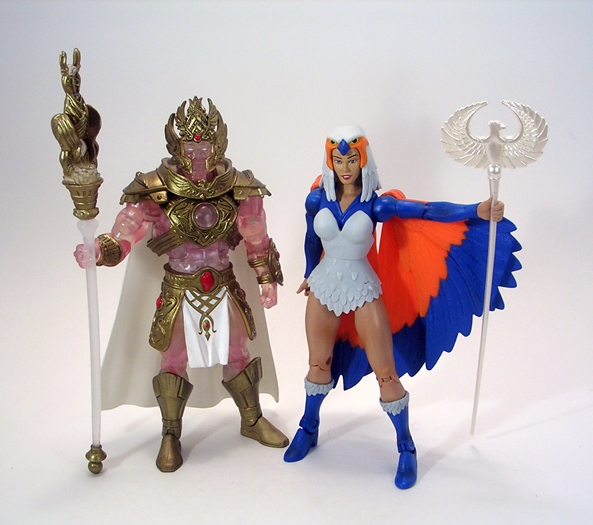 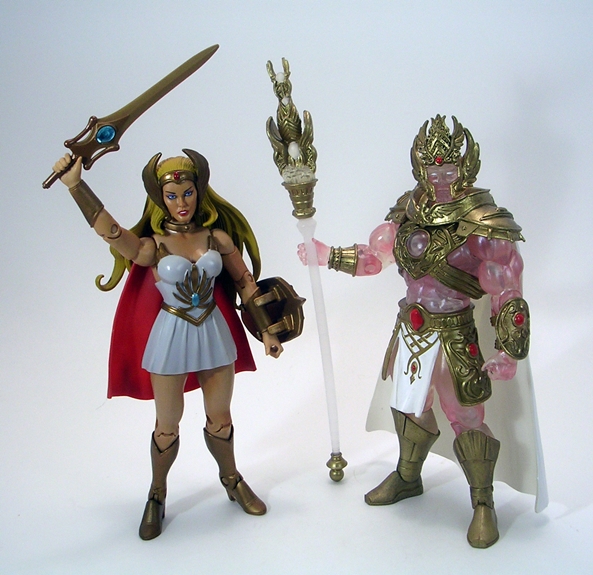 Light Hope is an absolutely stunning figure and a wonderful surprise. I was admittedly sold on the Club Etheria subscription right off the bat, but if that wasn’t the case, I’m sure that having Light Hope as the exclusive incentive figure would have won me over. In fact, he even more than makes up for having to buy that dreadful Double-Mischief figure. I think it’s awesome that T4H were given the opportunity to lend their design talents to create what is a completely fresh and new take on a character that couldn’t have otherwise been realized in action figure form. Even if you aren’t an MOTUC collector, Light Hope is worthy of a look based solely on his aesthetics alone. He’s a fantastic concept that’s executed perfectly and I’d dare say he’ll likely stand out as one of the absolute finest figures on my admittedly overflowing MOTUC shelves.