I’m almost caught up on my DC Collectibles figures, but then a couple more just dropped into my Pile of Loot, so I thought I’d take care of unfinished business before the new arrivals appear. Today we’re checking out Supergirl, who shipped in the same wave as the last DCC figure I looked at, Batgirl. I am still reading Supergirl’s book, but like most comics these days I read it in the collected TPBs and I believe I’m one volume behind the one that’s going to print next. I’ve been up and down on this book, but it’s safe to say that it’s far from my favorite horse in DC’s stable. I thought it started out pretty good. I kind of dig her new origins, but then it got really shaky and now it’s evolved into something that is just mildly enjoyable enough to me to keep me coming back, albeit as a very low priority title. With that ringing endorsement, let’s check out Supergirl’s figure… 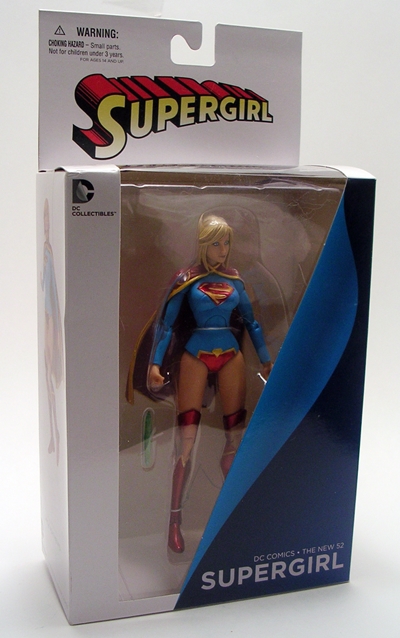 There’s the in-package shot and its right in line with what we’ve been seeing this year from DCC’s action figure line. You get a very collector friendly window box with a very minimalist deco. The side panel shows a photo of the figure, the back has pictures of all the figures in the wave, but it’s still pretty bland. About the only thing I really enjoy here is the colorful Supergirl logo at the top of the card. Supergirl has some troublesome twisty-ties to deal with, so let me get a clipper and we’ll get her out of the box.

DCC’s figures are all about getting collectors the current versions of their favorite DC characters, so needless to say, Supergirl is sporting her New 52 costume. I don’t have a huge problem with it. It’s a blue one piece with the iconic “S” logo on her chest and a rather strategically placed shield on her nethers, which looks like it’s supposed to be nod to the days, not so long ago, when caped heroes wore their undies on the outside. As it is, it just kind of draws extra attention to… well… that area. There’s not a lot of panel lining here, and while I don’t mind it on Batman or Superman’s costumes, it looks kind of silly on Supergirl’s skimpier outfit. Also, the knee cutouts on her boots still baffle me with the sheer stupidity of their design. What’s the point? Is it because Powergirl has exclusive rights to the boob window? Did the designer have some kind of knee fetish? Is that a real thing? Well, at this point picking on Supergirl’s knee-less boots is kind of like picking on a pair of defenseless kittens, so we’ll move on.

The portrait here is OK. I think they did a nice job on the hair and I really like the plastic and skin tone that DCC is using for the faces on these figures. She has an appropriately youthful countenance. If I were pressed for something to complain about it would be the eyes. They look just a bit too much like crazy ex-girlfriend eyes. But I really am only nitpicking here. I hear tell a lot of horror stories of people getting googly eyes on their DCC figures, especially with Supergirl and Batgirl. With that being the case, and considering I got this figure sight unseen, I’ll happily take what I got.

I really dig the coloring on this figure. The blue is clean and looks great when contrasted with the red. I especially like the metallic red paint used for her boots. The yellow fringe is vibrant and neatly painted. There’s barely any slop on this figure to be found.

I’ve spent a fair amount of time praising DCC’s newly found discovery of articulation, or at least improved articulation. Now that I’ve got a number of these figures on my shelf, however, the truth is starting to sink in that better may be better, but it’s not necessarily great. Supergirl has rotating hinges in her shoulders, ball joints in the hips, hinges in the elbows, knees, and ankles, and swivels in the biceps, wrists, and thighs. Her head is also ball jointed. The inclusion of the thigh swivels is very welcome, as Powergirl was sadly missing those, but posing these figures still feels rather stiff. So yeah, much better than we used to get in the days of DC Direct, but still room for improvement.

Supergirl comes with one accessory. It’s a transparent pickle. Ha! I’m just joshing you and be thankful I didn’t go somewhere else with that joke. No, she actually comes with a sliver of kryptonite. Fun!

DCC continues to do a fine job assembling their action figure universe of New 52 characters. While I’m ready for another jump ahead in the articulation department, Supergirl still represents a great sculpt and some fine paintwork. And while this may not be my favorite iteration of Supergirl’s costume, but I can’t fault DCC for that, as they’re merely giving fans the characters as they are currently appearing in the books. Supergirl set me back about $22 and as long as these figures don’t creep up any higher then that anytime soon, I’m pretty content with the price.

So, before punching out for the day, a quick administrative note. As I warned earlier, this is going to be a truncated week for content. Tomorrow is Thanksgiving and I’ll be busy all the way into the weekend. I am going to try my best to get at least one more feature on Friday or Saturday and then hopefully get back to normal next week.

Have a great Thanksgiving and I’ll see y’all on the flipside!