I’ve got a ton of these He-Mans figures to look at over the next month, so you’ll be seeing a little more MOTUC around here in the weeks ahead. November was a big month just for sub figures alone, but then I picked up some more on Early Access and a bunch more as part of the Cyber Monday sale. I’ve already looked at November’s Club Eternia figure, Tung Lasher, so today we’ll check out the Club Etheria figure, New Adventures She-Ra. While I hold only a passing familiarity with the New Adventures version of He-Man, I’ve enjoyed collecting some of the Classics versions of the Space Mutants. In fact, I’ve got a bunch of the ones I’m missing coming in next week. I still don’t have the Classics NA version of He-Man, but thanks to the Club Etheria Sub, I sure do have his sister, She-Ra.

There’s the packaging and I don’t have anything new to say about it, other than it has a “Galactic Protectors” sticker on the bubble. So instead of rambling on about packaging we’ve seen so many times before, let me take this time to point out that the revelation of NA She-Ra seemed to piss off a lot of collectors. As far as I know she’s a totally original figure as I don’t recall She-Ra ever appearing in the New Adventures series, but if you’re a more hardcore Masters fan and care to brand me an ignorant bastard, then by all means, have at me! I guess the point of contention here was that the Club Etheria Sub has a limited number of slots and they didn’t want one of those taken up by a figure no one seemed to be asking for. That really shouldn’t be an issue since Club Eternia is getting its share of Princess of Power figures as well and besides which, I think it was a cool idea to give us a NA re-imagining of She-Ra. It’s also worth pointing out that I’m a really casual fan of the Masters fiction and for me this line is all about the figures themselves, so when Matty embarks on flights of fancy like this one, it just doesn’t bother me. Let’s get her open and check her out. 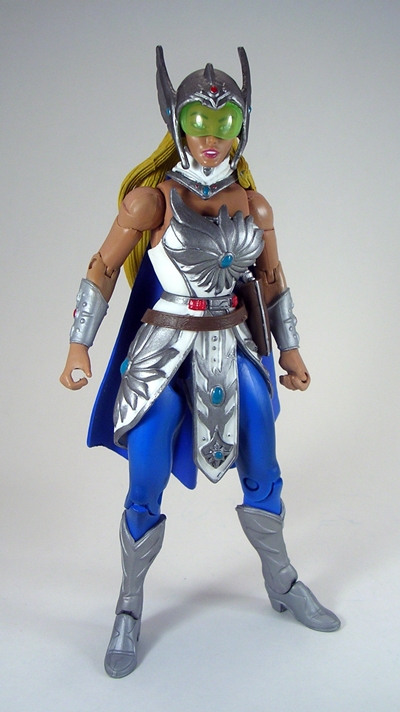 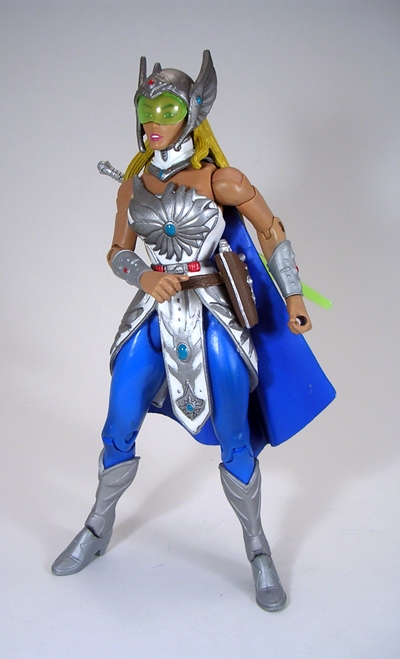 So, yeah, if you’re one of the haters and looking to hear a sympathetic voice, you won’t find it here, because I freaking love this figure. She-Ra comes sporting New Adventures styled SPAAAAACE armor and it looks totally bitchin on her. The sculpted ornamentation looks fantastic and while I’m not a big fan of asymmetrical designs, even the giant lopsided silver flower on her chest sort of works for me. The ensemble is rounded out by a sporty blue and white cape, along with some silver boots and arm bracers and a pair of blue pants. Oh yeah, you also get a brown gun belt with a functional holster and y’all know how much I love those functional holsters! While I enjoy the white, blue, and silver coloring on this figure, I will say that the silver paintwork could have been a little sharper. There’s some slop here and there. It’s not terrible, but it is notable and as these figures continue to creep up in price, I will continue to keep calling out little flubs that I would have happily given a pass on less expensive retail figures.

The portrait consists of a permanently sculpted helmet that’s giving me a very strong Thor vibe if Thor were a woman. Oh wait… Thor is a woman now! Yeah, an alternate helmet-less head would have been cool, but you can always do some head popping and swapping with another She-Ra if you really want to. At least I’m assuming you can. I haven’t tried it myself yet. I will say I appreciate that the green visor is removable, although I will most likely display the figure with the visor on because it contributes nicely to the spacey aesthetic. 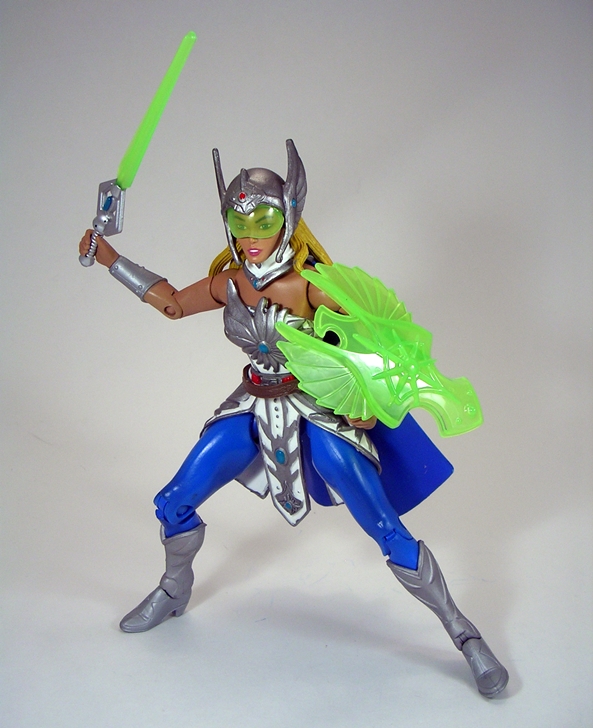 She-Ra features all the usual articulation we’ve come to expect from the female characters in the line. The arms have rotating hinges in the shoulders, hinges in the elbows, and swivels in the biceps and wrists. The legs are ball jointed at the hips and have hinged knees and ankles. She can rotate at the waist and the neck is ball jointed.

She-Ra comes with an energy sword and shield and both are pretty cool. The sword is your typical light saber style with a silver hilt and a green translucent blade. The shield is an eagle motif also cast in green translucent plastic. There’s a sculpted loop on the back of She-Ra’s cape that allows you to store the sword back there, although I would presume the blade is switched off when not in use so it doesn’t make much sense. Ah, I’m over thinking it and having someplace to store the sword is a nice feature for when she wants to switch to target practice… 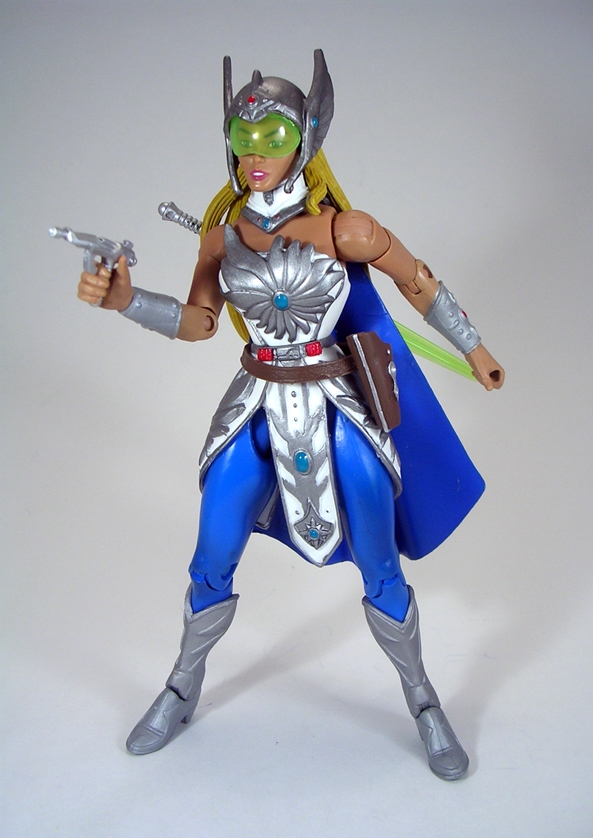 …because she also comes with a nice little pistol for blowing away Space Mutant fools. At first I thought it was just going to be a repack of the pistol that came with Battleground Teela, but it is indeed different. I get a warm and fuzzy Buck Rogers-slash-John Carter vibe off the gun and pistol and I love it! 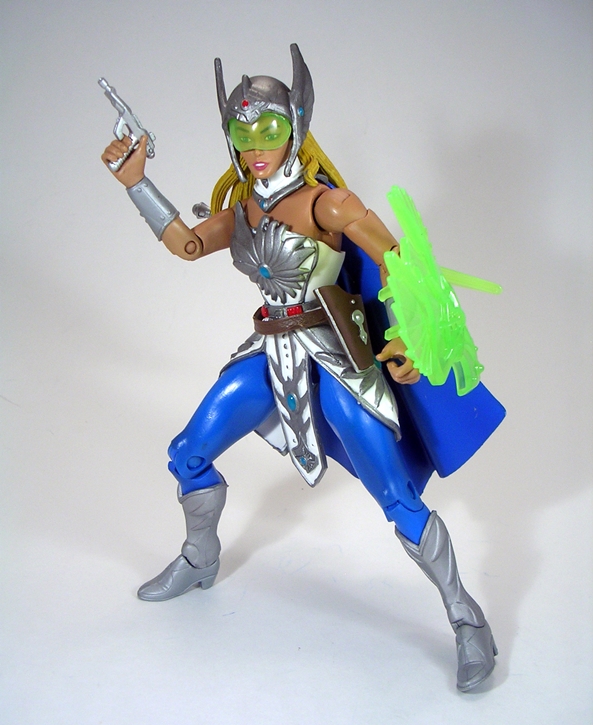 If you’re one of those collectors upset over this figure’s release, I can’t offer you much in the way of sympathy. The truth is I think the Masters Classics line has shone brightly when going off the rails and giving us original designs like this one or even the recent Light Hope. And while Club Etheria does indeed have a limited number of slots, don’t forget that Princess of Power figures will be releasing in the Eternia Sub as well, as evidenced by this month’s Mermista release. I think NA She-Ra is a great looking figure and lots of fun. She also finally gives me a hero to team up with Icarius and Hydron to fight my Space Mutants because I don’t have the Classics New Adventures He-Man. I guess I need to remedy that soon.