I’m sure many of you recall the DC Signature Collection. It was Matty’s well-intentioned effort to keep the DC Universe Classics line going by turning it into an online subscription. It lasted for two years before it withered and died due to lack of interest during the run up to its third year. Several figures were shown off for that third year and all of those were eventually produced and made available on Matty Collector to allow those of us who still kept the faith, an opportunity to complete our collections as much as they ever could be. Well, a bunch of those figures went up for sale during Matty’s Cyber Monday event and I finally relented and bought Ice to go with my Fire and complete the buxom elemental duo. And so, here we are, at a little more than a year after the line’s demise, revisiting it this one last time. 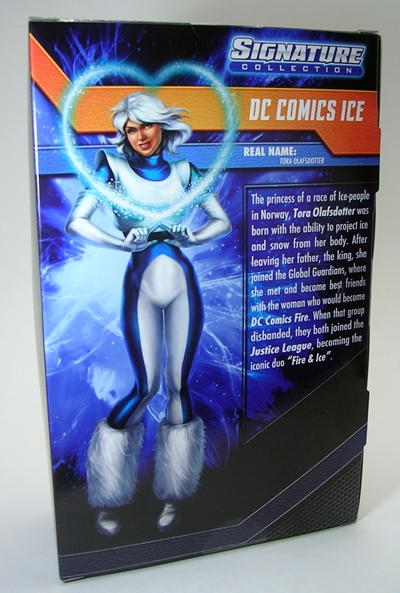 I do kind of miss these compact little collector friendly window boxes. These are a far sight better than the bland packaging DC Collectibles is using these days. The Signature Collection character art was almost universally great and that’s certainly the case here with Ice. Man, this is some great stuff! I love the playful ice heart she’s tracing and the portrait is really good. So, good in fact that when I got the actual figure out it felt like a bait and switch. So let’s get her out of the box, jump right in and take a look at that head sculpt…

Yeah, I don’t know what happened here. The head sculpts for this line were almost always good, but poor Ice got screwed. She’s got a broad and rather manly face looks more like a dude than the attractive Ice from the comic panels that I know and love. Just compare the figure to the box art and you can see an insurmountable artistic chasm between the two. But if the poor sculpt wasn’t bad enough, there are also some creases from the casting process on her face, which make it look like she’s been scarred up in a bad car accident. How unfortunate. The hair sculpt is a bit chunky, but overall not bad. 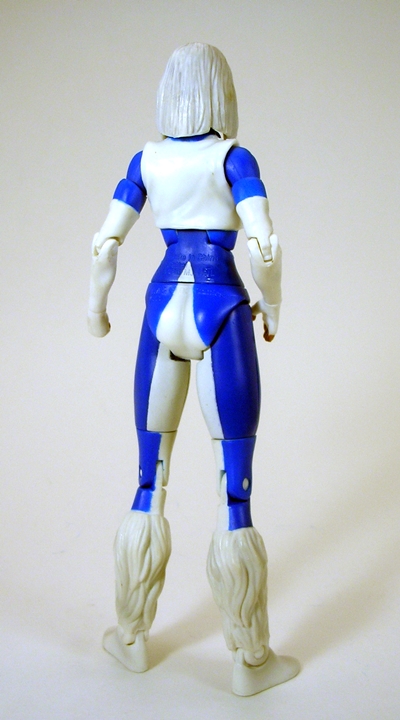 The rest of the figure fares a little better with a pretty good recreation of her costume. The top, the long gloves, and the shaggy leggings are part of the body sculpt and both are done fairly well. The rest of the figure utilizes a standard DCUC style female buck with blue paint added to the white plastic for the coloring of the costume. The paint lines are fairly clean, although the pegs for the knee joints aren’t painted blue to match the costume and that’s a bummer.

Ice comes with one accessory and it’s an effect parts of an ice blast that fits over her right hand. It’s just a clear, crystalline piece of plastic that works fairly well for hat it is.

And really, that’s all I have to say about Ice. She went up for sale during Matty’s Cyber Monday festivities, but she wasn’t actually on special or anything. That means that I paid about $25 for her and that was way too much for such a mediocre figure. Everything about Ice feels like Mattel knew the writing was on the wall for this line and just wanted to push her out the door. The sculpt for the portrait started out as a fail and the poor casting process dragged it down even further by disfiguring it with creases in the plastic. I guess I’m at least content to own the figure and complete the Fire and Ice duo, but it’s sad to see the once great DC Universe Classics line be reduced to this kind of disappointment in the end. It was truly a great line of figures, one of the best, and it deserved a better send off than this.