It’s New Year’s Day and a lot of y’all probably have hangovers. Well, welcome to what I like to call… “every single morning, ever!” It just so happens that the first day of 2015 lands on a Thursday and, unlike Thanksgiving and Christmas, this time I’m not bumping Transformers Thursday. Instead, let’s look at something else I got for Christmas… Roadbuster! This is a momentous occasion for me, as I have been collecting Transformers since 1984 and yet this is my very first Roadbuster figure [No it isn’t, you idiot, you got the one from Dark of the Moon!]. In fairness, I can’t recall there being too many of them since the original. And that original figure, paired with Whirl, was one of them weird Transformers that didn’t seem to quite fit with the others so as a kid I stayed away from it. This is also a bit of a sad occasion too, as 2015 will see the end of the excellent 30th Anniversary “Thrilling Thirty” releases and move on to that whole Combiners Wars thing, a line that I will be really selective about buying. 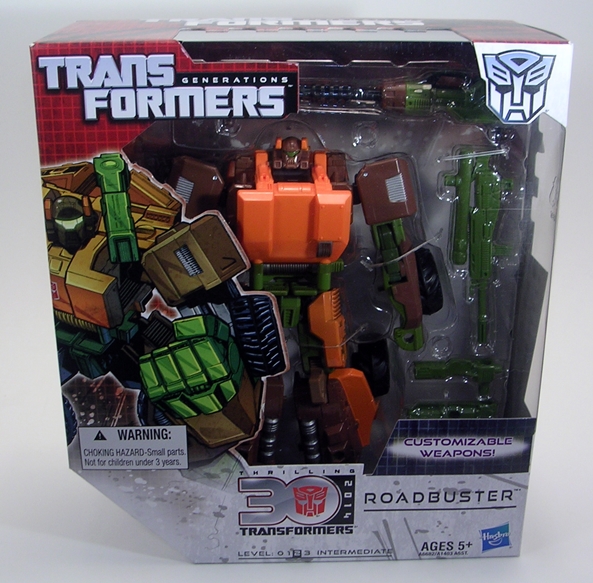 Sigh… There it is, the 30th Anniversary packaging. Aside from that nonsensical angled corner on the bottom, I really liked this stuff. Granted, these Voyagers didn’t come with a free comic book like the Deluxe packs, but I’m still going to be sad to see this line go. The box features that familiar G1-style grid pattern and some rather nice character art along with a window to show off the figure and some of his goodies. 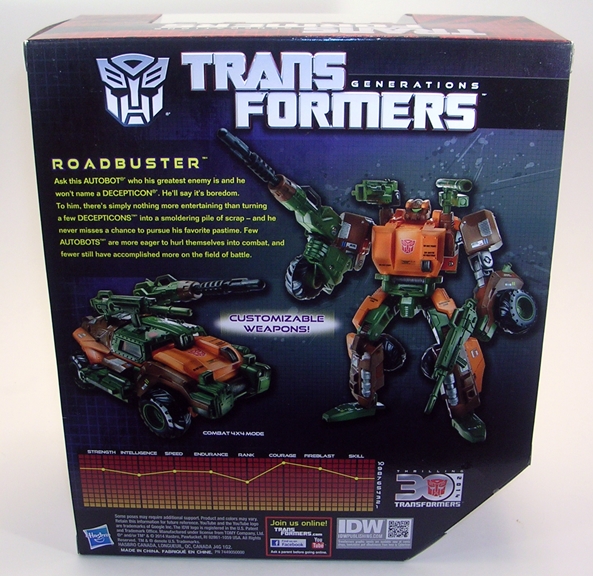 The back of the package shows off the toy in both modes and has a little bio blurb about how Roadbuster loves murdering Decepticons more than anything else, including eating chocolate ice cream. OK, I made up that last part, but I bet it’s true! Theoretically this box is collector friendly, but between the tray and the twisty ties and all the other nonsense, I haven’t gotten one of these Voyager Class figures out without shredding the packaging to all hell. That’s alright, though, because I gave up keeping Transformers boxes back when I opened one of my closets and got buried in an avalanche of empty Transformers Armada packages. That, I didn’t make up! Let’s start with Roadbuster’s alt mode. 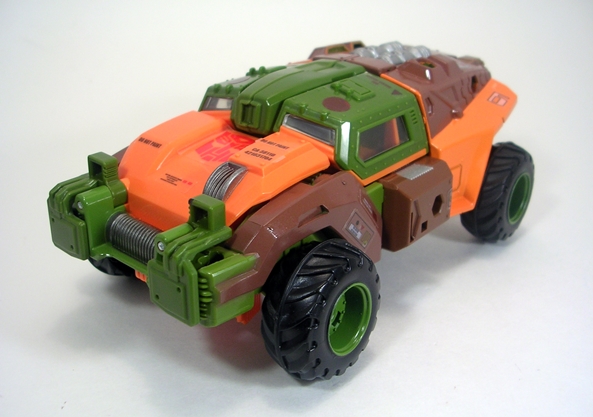 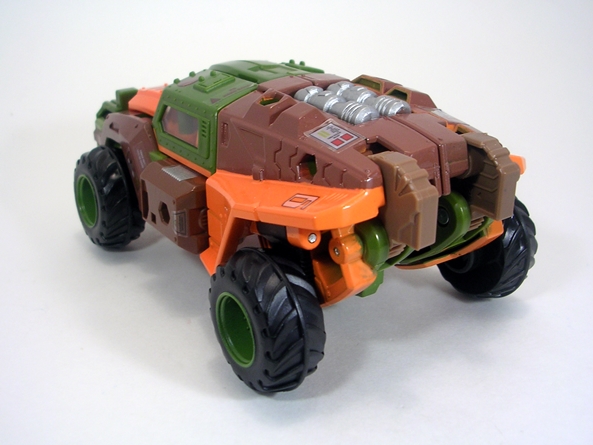 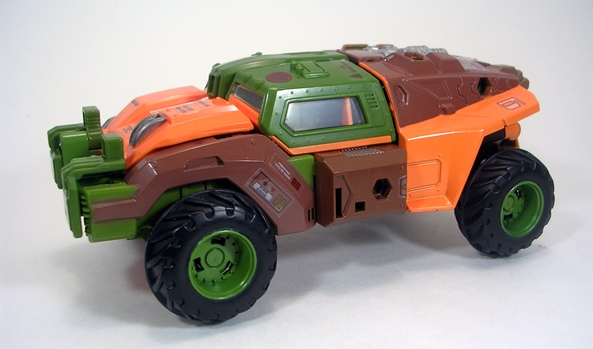 The official name for Roadbuster’s alt mode is a Combat 4×4 and that’s a pretty apt discription. It’s also a pretty good homage to the original G1 toy. Stripped down to its basest form, Roadbuster looks like an armored off-road vehicle bristling with connection ports just begging to be customized with his inventory of weapons. Load him up with his ordinance and he looks like something that should be patroling the deserts in a Mad Max film. The green, brown, and orange paintjob is ugly as sin, which matches the design of the vehicle as well. But, what Roadbuster lacks in aesthetics he does make up for with playability and swapping around the weapons can be rather fun. 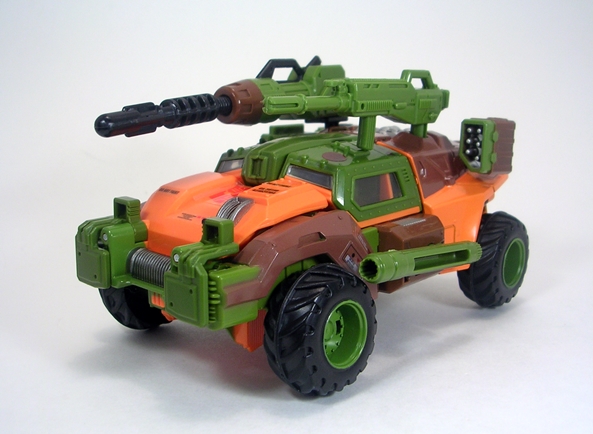 It’s also worth noting at this point that Roadbuster comes with a sticker sheet. They’re totally optional, but if you want to get a look approximating what’s shown on the box, you’ll have to have a little patience and slap some of these things onto the toy. Actually, better make that, carefully place them onto the toy. It is indeed an odd thing to get stickers with Transformers these days, although Metroplex came with them and as I understand it so does Whirl. Overall, I think the stickers are value added, although I was a bit choosey over which ones I put on and which I left off. Some just don’t fit in the proscribed area. I also got a good chuckle out of the “Do Not Paint” stickers and the irony about how few paint apps appear to be on the 2015 figures. It looks like someone at Hasbro is taking that idea rather literally. Anyway, the point here is that even if you aren’t into stickers, you might want to consider applying at least a few of these, because he looks rather barren without them.

Transforming Roadbuster is relatively simple and satisfying, but it’s here where I really felt that the odd quality of this figure starts to show itself. It feels a little cheap and hollow and a lot of the moving parts, thankfully the ones that aren’t the robot’s joints, feel rather loose and floppy. It’s hard to explain but this just doesn’t feel like a Generations figure to me. In fact, it kind of feels like a knock off. Once in robot mode things are on the upturn. I absolutely love Roadbuster’s robot design. It takes everything about the original G1 design and makes it modern and better proportioned and actually articulated. Like his alt mode, he’s ugly and raw and clearly built for one thing… battle. Even when he’s just standing on the shelf at attention, this guy looks still looks like badass personified. 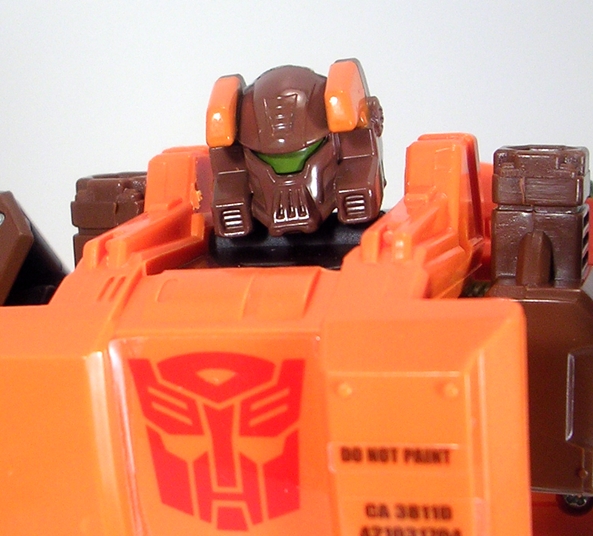 Yeah, look at that mug. It’s cold and completely void of emotion. Take a good look, Decepticons, it’s the last thing you’re going to see before he rips your energon pump from your chest and drinks from it. Yeah, I realize he doesn’t have a mouth, but it still sounded cool. He has a clear plate on the back of his noggin for light piping, but it seems like they painted over the visor, because I can’t really get any light out of it. 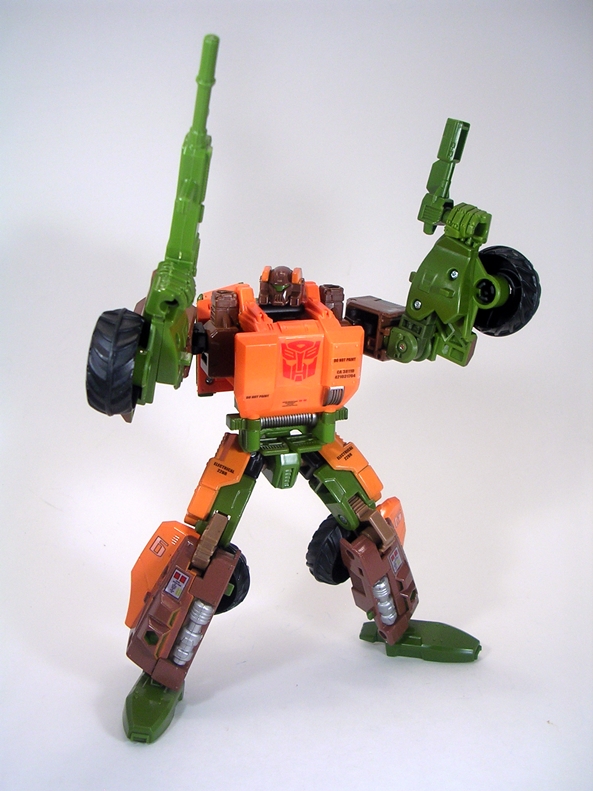 Roadbuster features some solid articulation and thankfully lots of ratchet joints to keep his general floppiness from effecting the important joints. The shoulders have swivel hinges, the elbow had double hinges and there are swivels in the biceps. The legs have universal movement in the hips, double hinges in the knees and hinges in the ankles. The ankles also feature rockers as a side effect of the transformation and the neck is on a ball joint. My one complaint here is that the lateral movement in the hips is not ratcheting and my Roadbuster has a habit of doing the splits if you make his stance too wide.

As with his vehicle mode, you can go crazy customizing the weapons on Roadbuster’s robot mode. He has pegs on the tops of his shoulders, sides of the shoulders and he can hold them in his hands. It all makes for some good fun… except for that little rocket pack piece. That piece can go to hell, as it doesn’t seem to want to fit anywhere without excessive force. Best I could do was get it into one of his shoulders.

I seem to recall a lot of fans losing it when this guy was announced and when you add that to the fact that Fansproject’s version before this sold quite briskly and for a lot of money, I come to the conclusion that this is a character that is really popular with the fans. I’ve already indicated, however, I’m not a huge Roadbuster fan, but I’ve got nothing against him, nor do I have a lot against this figure. Like the original G1 toy, it’s rather odd, it feels different, and the stickers and customizable weapons make him a bit of an anomaly. On the other hand, he looks great and he is rather fun to play around with, so I will happily find him a place on my Wreckers shelf. I’ll also add that he was a great gift, because I probably would have never bought him myself and I would have been missing out on a rather cool figure like I probably did with the original toy back when I was a kid.