So here’s a feature that’s long overdue. It was almost two months ago that my long awaited RoboCop figure arrived from Hot Toys with this fellow in tow. It was a tough break for poor Bucky Barnes, because he got pushed aside by the perfect storm of anticipation and excitement that surrounded that other figure’s arrival. But if there’s one thing I want to emphasize in this feature it is that my delay in getting to him is in no way a reflection on the quality of, or my excitement over, this figure. Quite the contrary. I’ve been waiting for just the right time when I could take a breather from the holiday madness and really do this guy justice because he is a truly fantastic figure and he shouldn’t be made to share the spotlight, just because he happened to ship with another figure that I’d been waiting on for over a year. And yeah, this will be a two-part feature. Today I’ll cover the packaging and the figure itself and tomorrow I’ll be back to look at all of his gear. 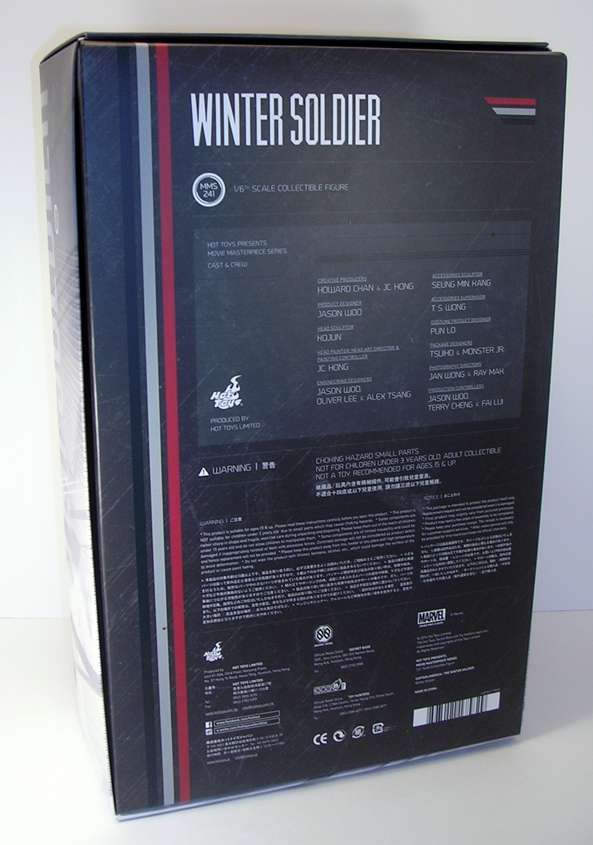 There’s the package and it’s about on par with what we’ve been seeing out of the stand-alone Marvel movie figures. I really dig the the background art as it suits the art stylings of the film quite well. The character art, on the other hand, looks way off from Sebastian Stan. Where are his chubby cheeks that are reflected so well in the actual figure’s portrait. I’m glad they didn’t use this artwork as the basis for the sculpt. The back of the box features a list of all the talented people who worked on this release. When you lift the lid, you’re treated to a cardboard insert with more great artwork and under that is the actual tray containing the goods. It’s not a flashy or elaborate package, but it does fit in quite well with the boxes used for my two Hot Toys figures from the first Captain America film, Cap and Red Skull, and I like that a lot.

It may be a fairly pedestrian box, but after opening this guy up I was immediately struck with accessory overload. With the plethora of weapons and extra hands, not to mention a second head, there is barely an inch of free space on Bucky’s tray. They even had to toss a baggied hand into the box in between his legs. I think I’d have to look back to my Movie Masterpiece Alice from Resident Evil to come close to the last time I had this many accessories come with one of my Hot Toys’ purchases. I’m trying to get away from doing two-part features, but it took only one look at all this stuff to tell me that I was going to need more time. So, let’s get Winter Soldier out of his box and check him out… 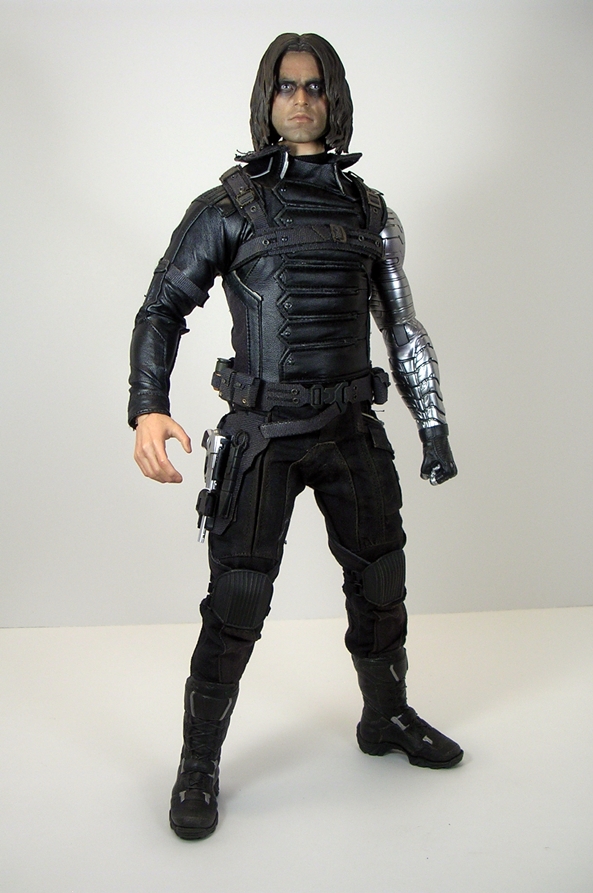 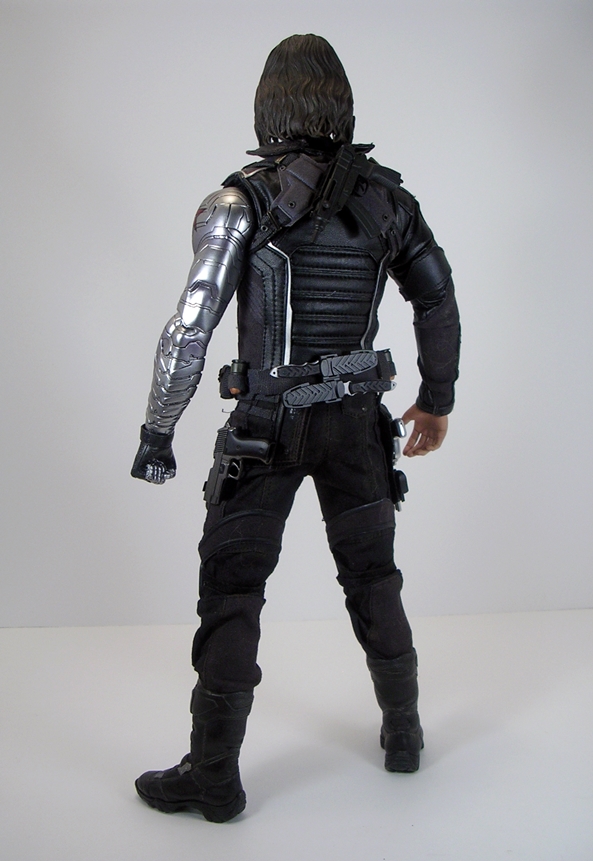 Hot damn, this is a great looking figure! Of course, it helps a lot that was really happy with the design of the movie-verse Winter Soldier. They created a wonderful compromise between the comic character with a dose of so-called realism and this figure captures that aesthetic almost perfectly. I’ll get to the “almost” part in a bit, but don’t dwell too closely on it, because it isn’t a big deal. I didn’t really appreciate how complex Bucky’s outfit was until scrutinizing it on this figure. The tunic consists of horizontal flaps across his chest and each of these are individually tailored and secure with velcro. The faux buttons on these are rather delicate, if you look closely you’ll see one of the darn things already popped off of my figure, but Hot Toys included a pouch of extras to glue back on if you happen to lose one. It should be a quick and easy fix. Bucky is sporting a pair of brown pants with plastic knee pads and beautifully detailed boots. Thanks to both his shoulder rig and his belt, Winter Soldier’s outfit is designed to accommodate almost his entire arsenal, but I’ll take a closer look at that when I cover the weapons tomorrow. I really wasn’t expecting to be wowed by this figure’s costume, but everything about the suit looks so intricate and amazingly detailed. It also fits the figure splendidly, although it is worth noting that the right sleeve is a bit restricting on the shoulder and keeps the arm from hanging straight down and close to the waist.

OK, so let’s swing back to that “almost perfect” comment. There’s something about Bucky’s mechanical arm that doesn’t quite hit the mark and I think it comes down to the paint. It has a decent glossy sheen to it and I like the sculpted panel lines, but I think maybe a more brilliant luster would have helped it along. It looks great on its own, but when I compare it to movie stills, it’s like there’s something about it that is just a few tweaks off from a perfect match. The one specific thing that I can point to is the fact that the exposed hinge isn’t painted. It’s a little jarring to see something like that in a figure from Hot Toys, but I’m guessing that painting it just wasn’t practical as it probably would have rubbed when the elbow was articulated. I do like the fact that the arm is mounted on a floating joint in the shoulder allowing for a good range of motion. This arm is by no means a sticking point for me and my enjoyment of the figure, but it’s the one thing about this guy that makes me stop and think, “there’s room for improvement there.” 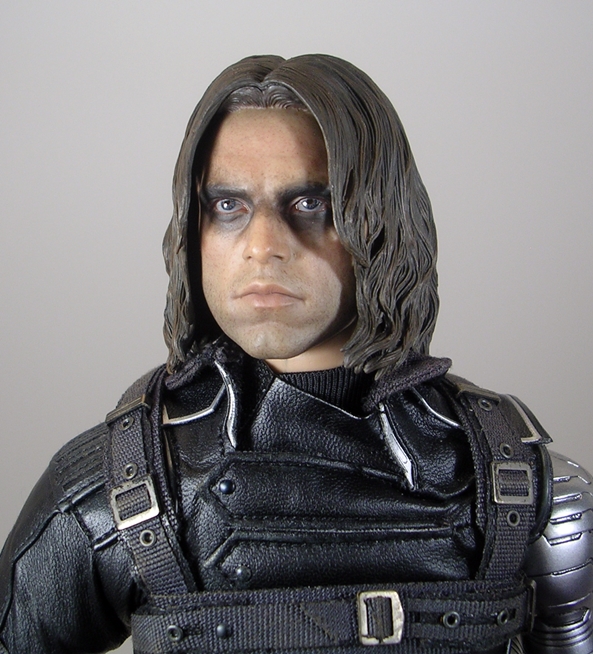 Moving on to the portraits, Bucky comes out of the box with his unmasked head and I think it’s a pretty spot on likeness to Sebastian Stan in heavy grease paint. I realize some people weren’t into the “raccoon look”, but I thought it was a decent compromise to the domino mask from the comics, which probably wouldn’t have looked so good in the film. The skin tone is a tad dark, but I think that’s supposed to be tactical camouflage. As for his coif, Bucky sported some long hair in the film and sculpted long hair doesn’t always translate as well as it could on these figures. I’ve probably mentioned it when looking at my Thor and Loki figures. I think Bucky’s hair showcases one of their better efforts, mainly because it isn’t quite long enough to rest on the shoulders. It looks good, but if you search around the Net you can find some rooted hair customs that look absolutely spectacular.

Hey, you know what’s fun? Taking your finely crafted $240 figure and applying excessive force to get the alternate head on it! Yes, the second head that comes with Bucky is an absolute bitch to get on because the socket is just too small for the ball on the post. I’m pretty sure that it was during the attempt that I lost that button off the front of the tunic. The consensus seems to be that the best way to go is to heat up both the post and the socket with a hair dryer… also something I’m not keen to do to my expensive collectible. A more permanent solution might be to use an auger and carve out inside the head. I’m not prepared to do any of that stuff right now so the shots I’m taking with the head don’t have it fully secured. 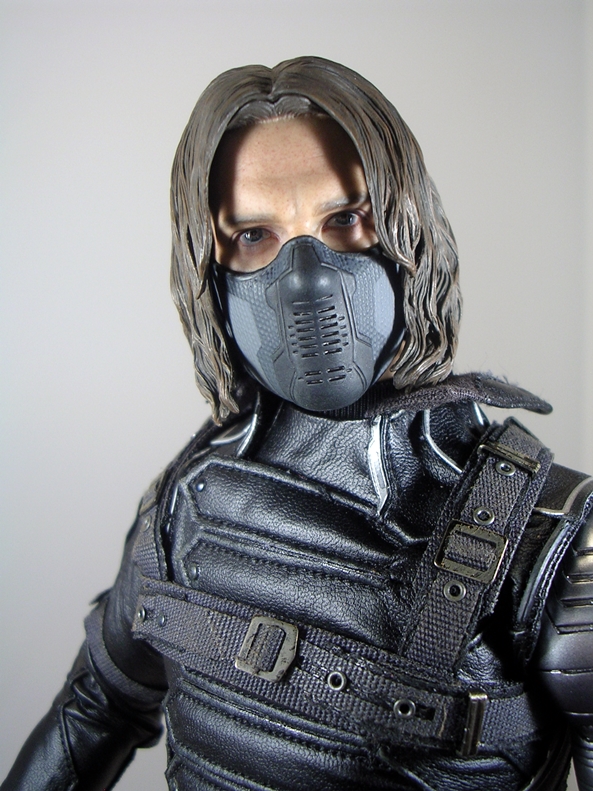 The alternate head gives you two extra display options. You can go full on mask and goggles or just the mask. The goggles are attached by removing the hair piece and just snapping them on. The goggles have a nice glassy sheen to them and stay on securely. All three portraits have their merits but I think my favorite is the “mask no goggles” look. It gives Winter Soldier a really intimidating look while still allowing me to appreciate some of the workmanship that went into the likeness. I also think the eyes are a little bit better crafted on that head than the unmasked one. 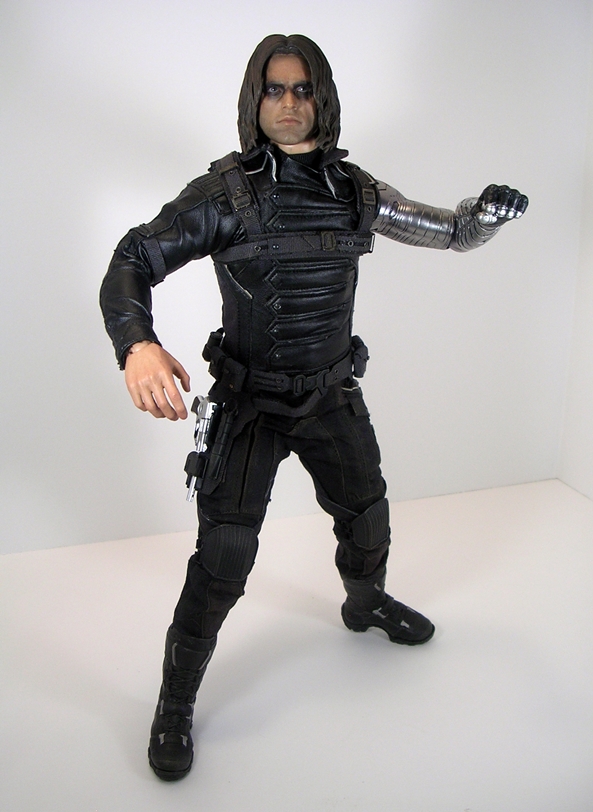 HANDS!!! It wouldn’t be a Hot Toys figure without a bucket full of extra hands. By now y’all know about me and extra hands. I don’t usually bother swapping them out unless I need to for an accessory. Bucky comes with a total of four pairs, plus an extra right hand. You get the token pair of fists, a pair of relaxed hands, a couple of pairs designed to work with the weapons, and an extra open right hand. Swapping these out is pretty simple and the detail on the mechanical hand is quite nicely done.

Lastly, you get the standard issue Hot Toys figure stand with the wire crotch support. The base has the Marvel logo with the title of the movie and the name plate reads “Winter Soldier.”

I’ve already run a little long, so that’s where I’m going to break today. Come on back tomorrow and we will check out Winter Soldier’s arsenal!