Yeah, I started this week with MOTUC love and I’m ending it that way too. It’s necessary as these are the last two figures I have backlogged from last year and I gotta get them open and out on the display shelves. Bow was released way back in the annals of Club Eternia, I want to say 2011 but I could be wrong. I didn’t get him when he was first offered and I’ve been watching him on the secondary market ever since, but at around $40-45, I was never willing to pull the trigger. When his trusty steed Arrow was announced as part of 2014 Club Eternia, I was hoping that they would bring Bow back and they sure did. I’m going to take a look at Bow today and Arrow tomorrow.

There’s the packaging and all I have to say is, “Special Friend Who Helps She-Ra???” What the hell is that? It’s weird and wrong on so many levels. And if he’s secretly in love with Adora, then why does his heart frantically beat when She-Ra’s in danger? So many questions, so many answers I really don’t care to know. You’ll also note my figure’s package states, “The Original!” which is Matty’s bizarre way of distinguishing this reissue from the original release. Yeah, I still don’t get that. Anyway, I have little memory of Bow from the She-Ra cartoon, although I do remember him as being an Errol Flynn type. I didn’t pick him up when he was first offered because I honestly didn’t think Matty would release enough Princess of Power figures to make collecting them worthwhile. Looks like I was wrong about that because now I have an entire shelf of them. With Arrow coming my way, it seemed only natural I should pick up Bow.

Bow is a rather dashing looking archer with a predilection for gold flare. His costume consists of a set of shoulders and chest armor with a short red cape. It’s all fashioned in one piece and the whole ensemble can be easily removed simply by popping off Bow’s head. The gold and bronze paint looks really nice and there’s even some beautiful scrollwork sculpted into the tops of the shoulders. I’m not entirely sure why, but Bow’s costume reminds me of El Dorado’s from DC’s Super Friends. Maybe it’s just all the gold, but I think Bow’s outfit is a lot more ostentatious and not as Aztec-y.

His quiver is also permanently attached to this piece and is rather ornate and includes a horse motif (only the first example of Bow’s unsettlingly rampant horse fetish) and a number of arrows sculpted into it. The quiver also has a flexible plastic cord that fits around Bow’s neck and under his chin. The costume is rounded out by a pair of blue pants, gold bracers, and gold boots. There’s certainly nothing understated about Bow’s fashion choices and one might say that he looks FABULOUS! 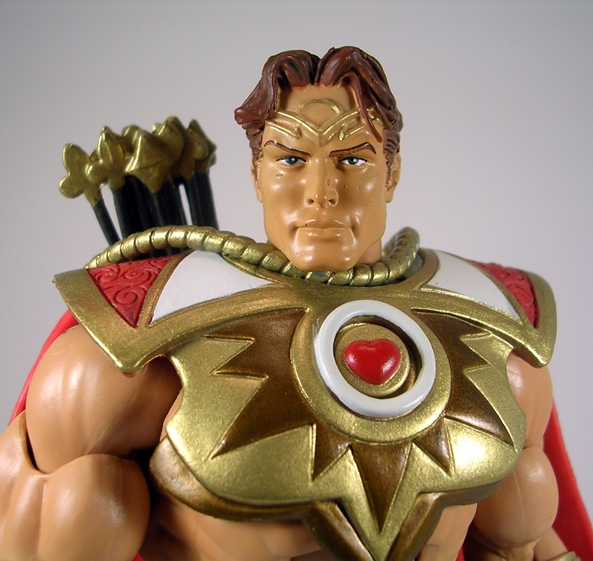 You do get one display option with Bow’s costume and that’s whether to go with the simple red circle in the middle of his chest or swap it out with the heart (which is accurate for both the vintage figure and the Filmation look). Wait? So why is the circle even an option and why is it the one packaged on the figure? I haven’t got a clue. Either way, it’s a fairly subtle difference and swapping them out is as simple as removing one plug and putting in another. Seeing as how the heart is both vintage and Filmation accurate, that’s likely the one I’ll go with.

The chest piece is not the only way this figure gives you the best of both worlds, you also get a choice between a vintage style or Filmation style head. The vintage style noggin is the one that the figure is packaged with and it’s certainly a nice sculpt. He’s clean shaven and he has a rather elaborate gold head piece. There are a few blemishes on this head. I’m not sure if it’s part of the molding process or something caught under the paint when they slathered it on.

The Filmation head is quite similar but features a mustache, heavier eyebrows, and the headpiece is gone. I haven’t decided yet which one will be the default look for my display. The mustache gives him a little more character, but I like the way the headpiece goes with the rest of his costume. In the end, I’ll probably lean toward this one because the sculpt is cleaner and the skin has a less waxy finish to it. 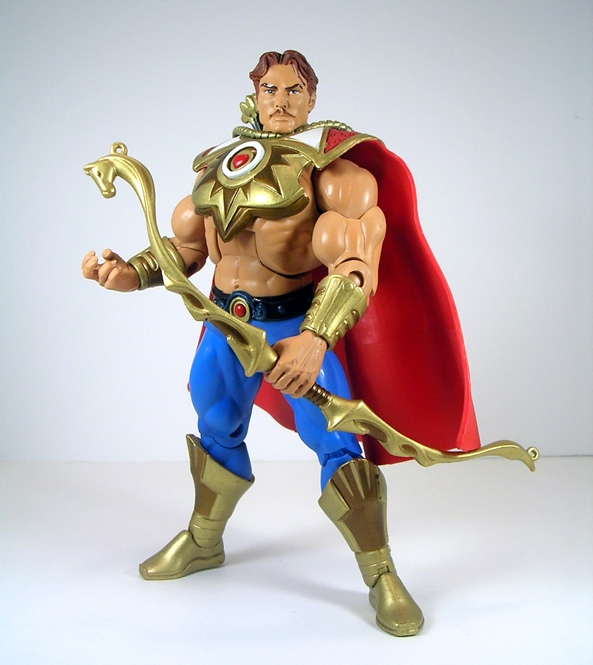 Articulation is exactly what we’ve all come to expect from the standard MOTUC male buck. Or is it??? The legs are ball jointed at the hips, hinged at the knees and ankles, and have swivels near the hips. There’s a swivel in the waist, an ab-crunch hinge in the torso and a ball joint in the neck. The arms have rotating hinges in the shoulders, swivels in the biceps, hinges in the elbows, and… what’s this? Hinges and swivels in the wrists? Ok, that’s something you don’t see in a lot of the MOTUC figures! It helps a little bit with posing, but it’s still tough to get some truly convincing poses of him knocking an arrow. 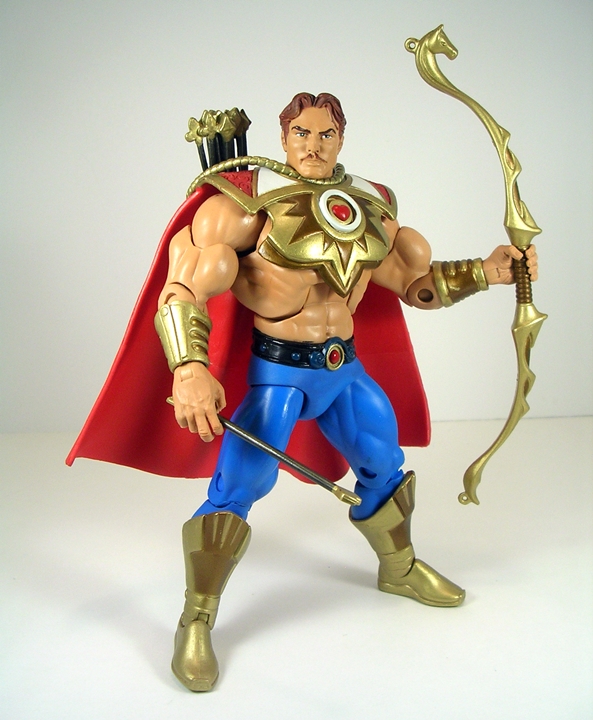 Moving on to accessories… well, they don’t call him Bow for nothing… surprise! He comes with a bow! Bow’s bow is a great looking piece. It’s pretty sizeable and cast in gold to match the rest of his blinged out costume. It has a sculpted grip and the top ends in a horsehead to match the one on his quiver. Once again, Bow really loves the horsies! The bow also has loops on the top and bottom in case you want to string it and it comes with a loose arrow.

Lastly, Bow comes with a harp. Naturally, it’s gold it has a red jewel in it and carries on Bow’s horse obsession with a horsehead sculpted into the top. I think that’s the top. Truth is, I have no idea if that’s how you hold a harp, or if this is truly a harp. It could be a lyre. I’m pretty sure it’s not a lute. Anyway, the harp is a nicely sculpted piece and I think it’s a rather cool and unique accessory that gives the character some added personality and it’s an important tool in Bow’s attempt to get out of Adora’s Friend Zone. Although frankly, Bow, Etheria seems to be lousy with hot chicks and not a lot of dudes, so you might be narrowing your options a little too much there. Play the field, bro. That’s all I’m saying.

Bow has been one of those few MOTUC figures that has been conspicuously absent from my collection for a while now. I’ve had him on my Amazon Wish List and as a Saved Search on Ebay, but I’ve never seen him at a price I was willing to pay. You can imagine how happy I was to see him go on the block again at Matty Collector and in the same month that Arrow was shipping. It was one of those times that Matty Collector did the right thing for collectors, and I didn’t even have to pay a premium for him. He’s a really great figure and considering how few dudes there are in the Great Rebellion, I consider him a pretty important figure in my collection. Not to mention that having Arrow and not Bow would have been unacceptable. And so tomorrow I’ll be back to check out Bow’s mighty winged steed and finally get this pair together.