I’m a little pressed for time today, so I thought it would be a good day to try to get caught up on looking at my Disney Infinity figures by finishing off The Avengers. I’ve had Cap and Hawkeye since the line first launched and Hulk was a delayed release, as prior to that he was an exclusive included with one of the limited pack releases. Disney’s been pumping out a lot of new Marvel figures for the Infinity 2.0 software lately, so I’m starting to get the bug and get back into collecting these.

I don’t have much to say about the packaging. The figures come on a simple carded blister pack with their character art dominating the card and a symbol showing which Playset they are designed to work with. It’s important to keep in mind that any 2.0 figure can be used in the Toybox Mode, but you can only use specific figures in specific Playsets. If you care about the packages, I’d avoid getting them at places like Gamestop. That’s where my Cap came from and you can see what they did to his card. In addition to the figure, each package contains a collectible art card that doubles as a web code to unlock the character in the PC version of the game. 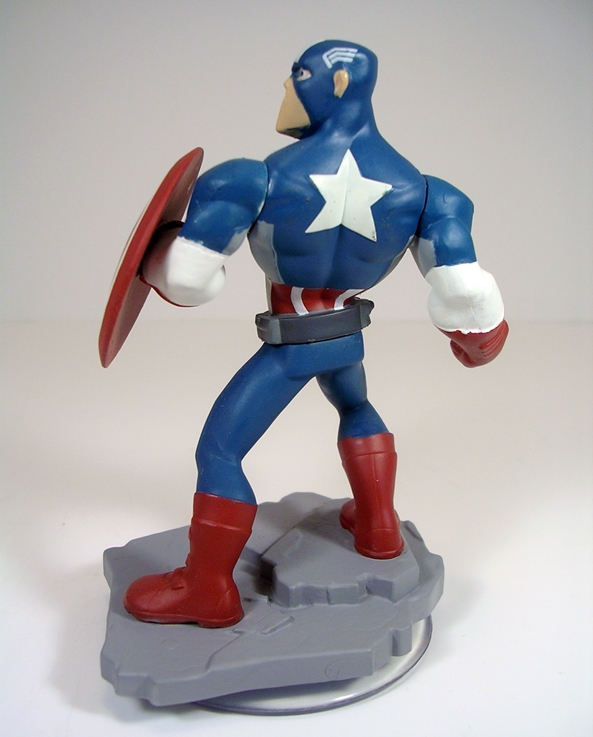 Captain America sports a pretty classic pose with his shield out in front of him and his other hand balled into a fist. Cap is also the only figure in the line where I have some paint issues. There’s some overspray between the blue and gray on his right bicep and a little bit of rubbing on the white star on his chest. It’s nothing terrible, but worth pointing out because the paint on the rest of my Infinity figures has been absolutely solid work. At least the paint on his shield is immaculate. 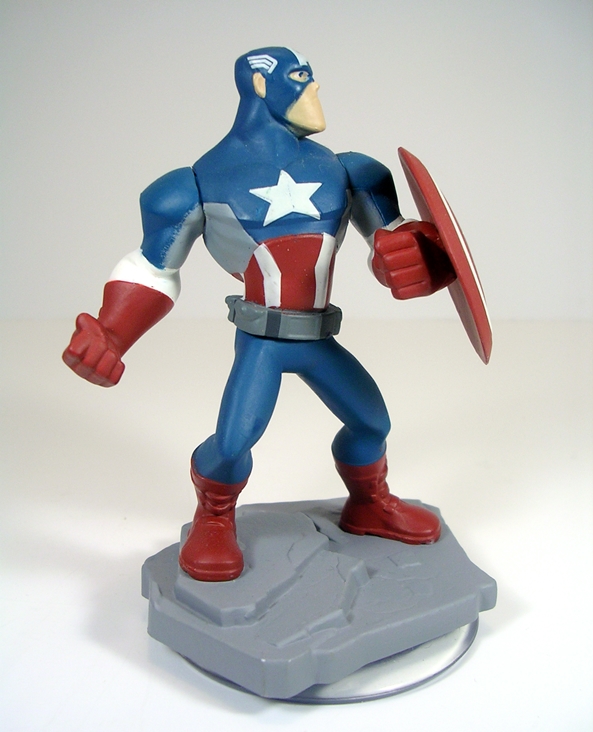 Cap also happens to be my favorite of these characters to play in the game, and overall second only to Iron Man. They really nailed the play mechanics of his shield beautifully. I love whacking Frost Giants with it by doing combos and it’s a very satisfying to hurl it, strike an enemy, and watch it arc back to me. Pure arcadey goodness! 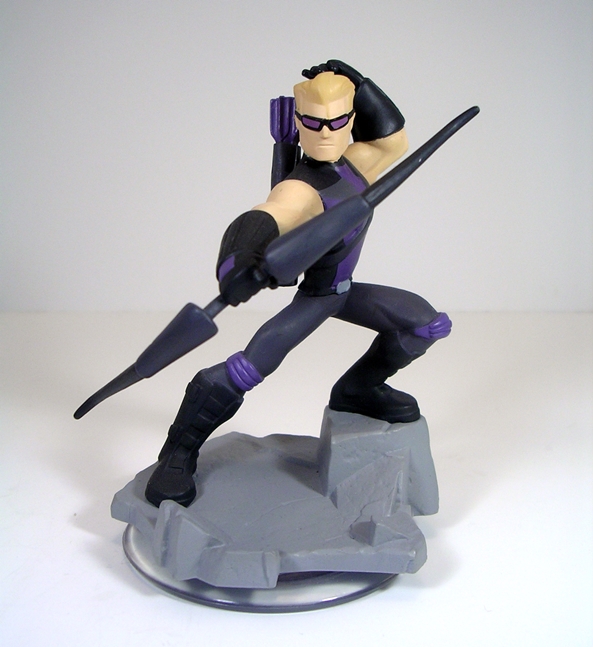 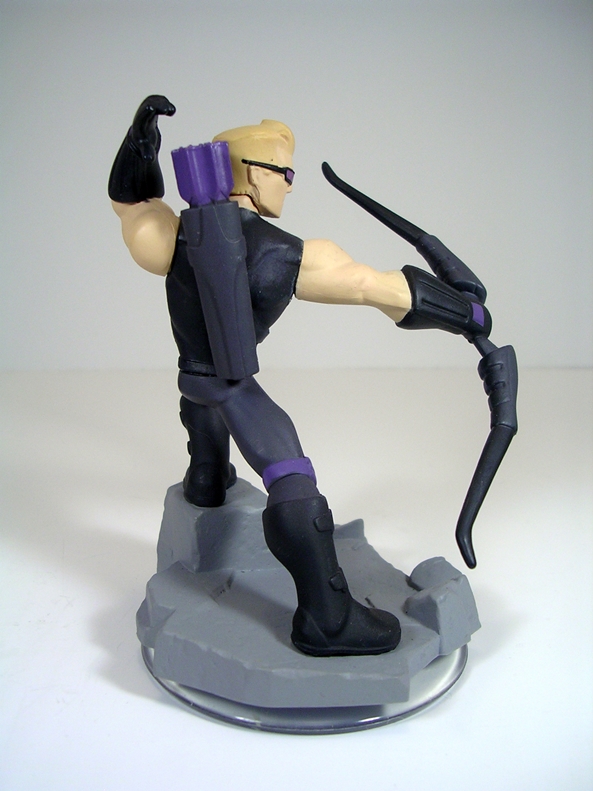 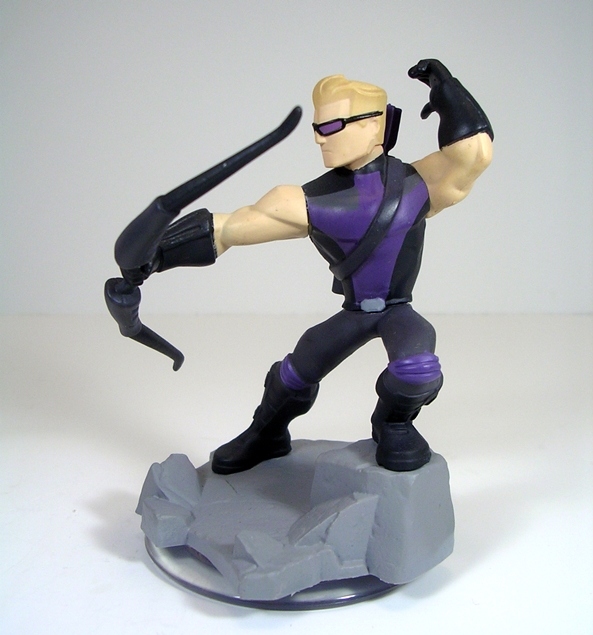 Next up we have Hawkeye, who is styled very much like a cross between the Marvel NOW! look and his Marvel Movieverse appearances. Hawkeye is relatively simple looking, but it’s the pose on this figure that really does it for me. He’s reaching for an arrow from his quiver and has his bow held out in front of him. The position of the legs is very dynamic and he looks absolutely fantastic when displayed beside Black Widow. I didn’t expect much from playing the game as Hawkeye, but it was a surprisingly fun experience, particularly after unlocking some of his advanced bow skills.

Lastly, we have The Hulk. He was the one Avengers character that was delayed from launch to entice early adopters to buy the super expensive complete set. I thought he was going to be tough to find, but I was able to pre-order him as a single-pack through Amazon with no fuss or muss. He’s pretty much a perfect little stylized and cartoony Hulk. I love his angry little face and those big honkin’ nipples. He’s also sporting a fantastic “come at me bro!” pose. The green they used is a tad washed out, but otherwise the paint is neat and clean. He probably needed to be a little bigger, but I’m sure they were under constraints to keep him within the price point and to work with the Infinity Portal.

Hulk is the only one of the Avengers characters that I haven’t beaten the game with. In fact, I haven’t actually played him in the game at all. It’s nothing against Hulk, but after going through The Avenger’s Playset five times with the rest of the gang, I needed a break. If Hulk had been available at launch, I’m sure I would have played him by now, but either way, I’ll get back to him sooner or later.

And that (finally!) wraps up The Avengers from Infinity 2.0. I like these little figures a lot and they look great all lined up at the top of my entertainment center. The next set I’ll be working on will be The Guardians of the Galaxy. I already have Rocket Raccoon, as he is the only Guardian that can be unlocked for use in The Avengers Playset. I’ll probably wait until I have a complete set and have played the Guardians Playset through a bunch of times before I feature them here on FFZ. The new figures that have been hitting the shelves this past month look great, but I only wish they could interact with the Playsets and not just the Toybox.