I love pirates and some of my favorite toy expressions of that love have been from LEGO and Playmobil. You don’t need licenses or stories or specific characters, you just need ships and pirates and soldiers and forts and booty for them to fight over. ARRRRR! When I first saw that LEGO was doing a new generic line of Pirates sets I was extremely excited and vowed that this would be the series that would finally got me to pony up all the monies for a pirate ship. But I’m still going to work my way up to it. I haven’t gone all in on a LEGO series since Pharaoh’s Quest, but I’m going all in on this one, baby! Today I’m starting things off with one of the mid-range sets… Soldiers Outpost! 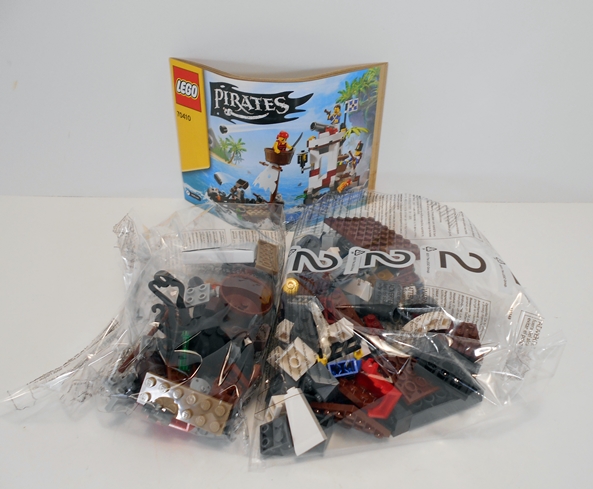 The box is yellow and sports a ripped flag with the series logo and a cutlass underneath it that really says all there is to say about what’s to come. It’s generic LEGO through and through and I love it! But check out that front panel art. What the hell is supposed to be happening here? A lone straggler pirate on a ragtag makeshift raft is being harassed by asshole soldiers taking pot shots of him while a giant squid is nipping at his heels. That dude is having a seriously bad day. Doubly so when you assume he’s probably just survived a shipwreck. They maybe should have called this set “Soldiers Target Practice.” Anyway, between the front and back panels you get a great look at all you get to build with the 164 pieces inside. The contents include two numbered bags of bricks and an instruction manual and I was pleased to see no stickers! This is the first LEGO set I can remember in a long time without any stickers! When you’re all done with the build you get a pirate raft, a soldier outpost, a squid and three Minifigs. You guessed it… let’s start with the Minifigs!

The Minifigs include two soldiers and a pirate, plus the squid. The pirate is your typical scurvy sea dog with a printed striped shirt, black pants and a red dew rag tied around his head. The printed face is pretty spectacular as he’s go an eye patch and a particularly surly look. This is basically a Minifig of Tom Savini playing a pirate as a Lego Minifig and that’s just plain awesome. He also comes with a pair of cutlasses, although I suppose you can give one to the soldiers. The squid is a single black sculpted piece with a couple of studs for eyes. Not much more to be said about him.

The soldiers are built off of the same bodies, both with identically printed uniform shirts and white pants. You get four sets of epaulets, two white and two gold. The Officer features a printed face with a goatee and a sculpted hairpiece, whereas the Soldier has a simple printed face, a tall hat, and a backpack. You also get two blunderbuss style pistols and a rifle. 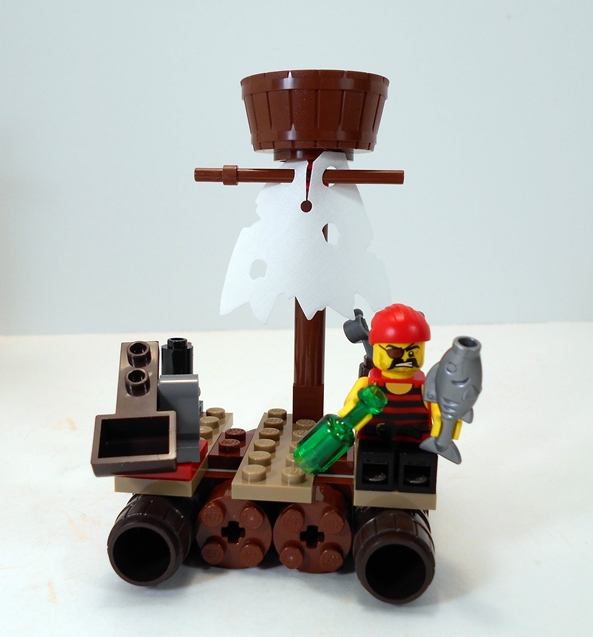 The pirates raft is a fun little build and it really does look like it’s crafted from the remnants of a LEGO ship right down to the barrels that are sticking out of the sides. I like to think that each of these bricks are actually used for building the LEGO Pirate Ship in this series, in which case this makeshift raft would be all the cooler. It really toes the line between being impressive and pathetic. He has a single oar, a bottle of booze, a barrel with a fish in it, and a mast with a crow’s nest and a ragged sail. Oh yeah, he also has a little catapult mounted on it. I guess it would be a pretty swanky little raft if it weren’t for the fact that he’s going up against a fortified outpost armed with a cannon and while being attacked by a squid. 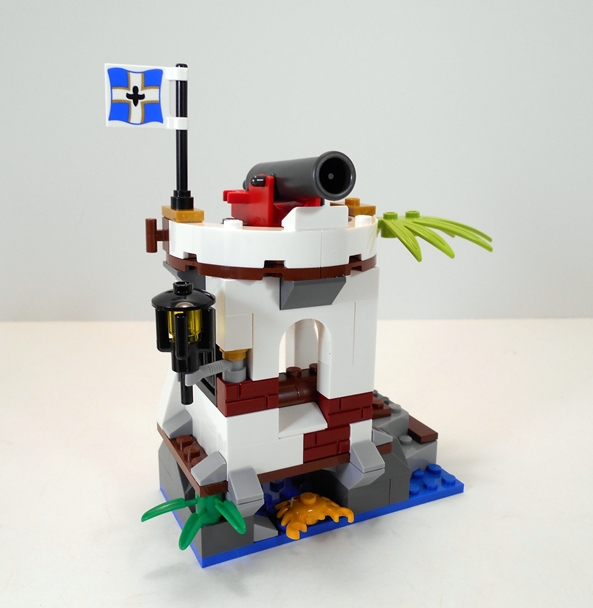 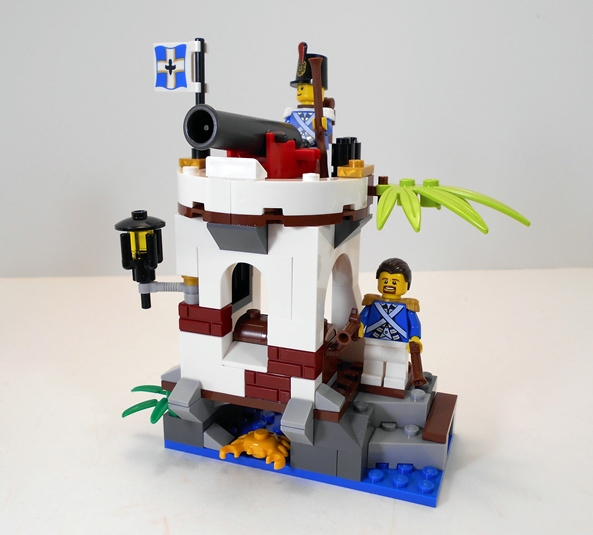 The rest of the set consists of the Soldiers Outpost, which is also fun to build and looks great. I particularly like the exposed brick areas showing through the chipped painted walls. It’s got plenty of room for the two Soldiers and includes a chest full of gems, a crab ‘s den (complete with crab!) scuttling underneath, a lantern, a flag, and a pivoting cannon on top with a spring-loaded firing mechanism. 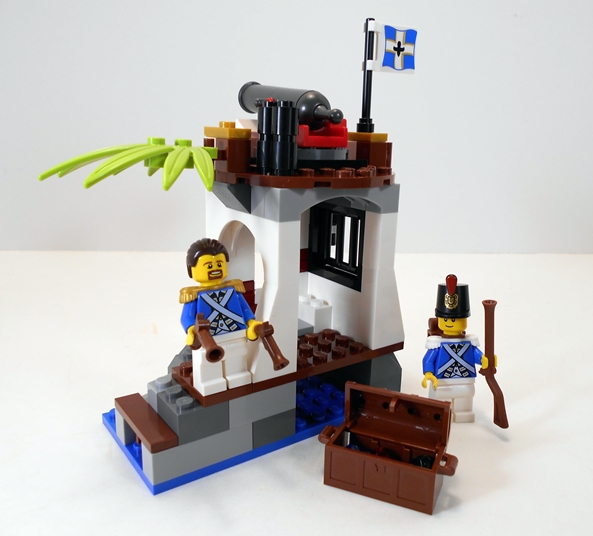 At $20 this set feels like a solid deal, at least as far as LEGO economics go. It didn’t take me very long to build, but it was fun and refreshingly not terribly repetitive. The Minifigs are solid and both the raft and the outpost have a lot of charm to their designs. I’m actually kicking myself for not picking up one of the other smaller sets too, because I probably would have tore into it right away. Either way, I can see a lot more of these Pirates sets in my near future. This is going to be a fun series to collect and a fun world to build!