It’s Friday, May 1st and that means Age of Ultron is out in the theaters now and like myself, many of you are still reeling from the excitement of having seen it at least a couple of times. Fear not for spoilers, because all I’m going to say is that it lived up to all my expectations and yet a lot of it is still settling in. Better than the first? Hmm… probably not, but still an amazing ride and further proof (as if we need it at this point) that the team of Marvel and Disney know how to bring comic action to the big screen. To commemorate the movie’s launch, I am taking the opportunity to check out the last two of the the three Age of Ultron figures that were released as part of the Thanos Wave of Marvel Legends. If you missed out on Monday, it was The Hulk. Today I’m looking at Cap and when I come back for Marvel Monday, I’ll take a look at the Iron Man, Mark 43 armor. Let’s go. soldiers!

There’s the packaging and I’ve got nothing new to say about it, other than all the movie figures have the Age of Ultron branding up at the top. I will, however, take this opportunity to talk a little about Cap’s new uniform. The evolution of Cap’s costume has been interesting. We got the original WW2 style look in The First Avenger. A very big departure to a modern look in The Avengers. Then in The Winter Soldier he donned the Captain Rogers homage that was the STRIKE Suit before he literally went back to his WW2 costume (albeit ret-conned with some tweaks). And that brings us to Age of Ultron where he’s wearing what I can best describe as a mix of the STRIKE Suit and ret-conned WW2 outfit. I like it a lot, but I’m still deciding whether I like it enough to justify another Hot Toys Cap purchase. Luckily picking up the Legends version is not such a weighty decision. 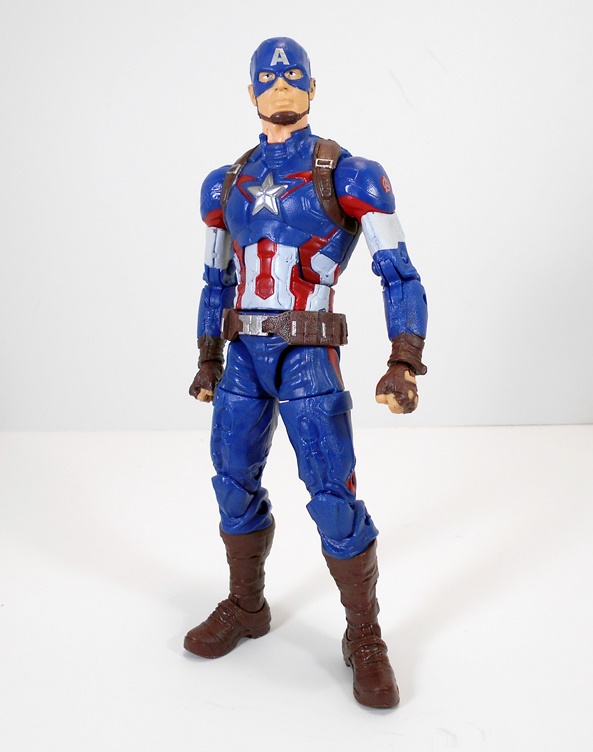 When I first held this figure in hand, I thought it was a straight repaint of the STRIKE Suit Cap, but comparing the two reveals there are significant tweaks to the mold, mostly in the torso. That’s fine, because I’m a big fan of the former figure and seeing it dressed up in the red, white, and blue is making me love it even more. The belt still seems a bit on the thick side, giving him what looks like a shelf surrounding his waist, but otherwise the contours and proportions are excellent. The new paintwork is overall fairly clean. I like the silver detailing on the buckles of his shoulder rigs and the fingerless gloves are a nice touch. All in all, this is a great looking figure that serves up the best of both worlds, but if you’re looking for a completely new body, you’ll be disappointed. 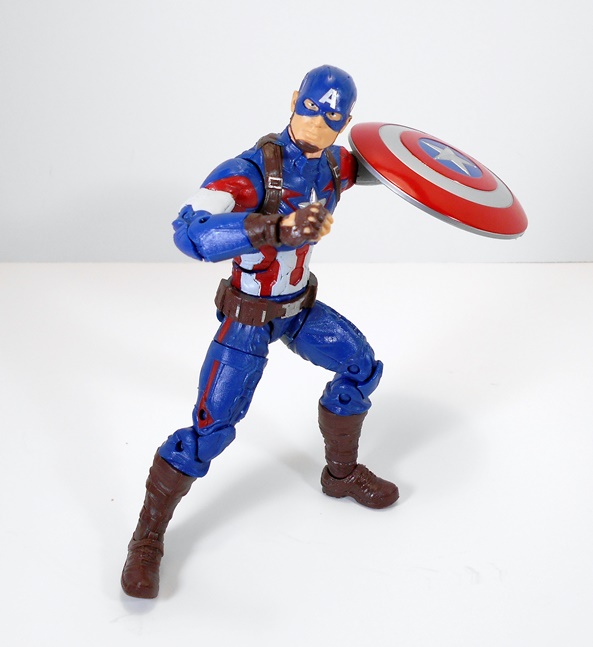 If you have STRIKE Suit Cap then you obviously know what to expect from the articulation here, but if this is your first time with this mold, I’ll run through it anyway. The arms have rotating hinges in the shoulders and wrists, swivels in the biceps, and double hinges in the elbows. The legs are ball jointed at the hips, have swivels in the thighs and tops of the boots, double hinges in the knees, and the ankles have hinges and lateral rockers. Cap can swivel at the waist, he has an ab crunch hinge in the torso, and his head is both hinged and ball jointed. STRIKE Suit Cap spent quite a while on my desk before getting put on the shelf and I had a lot of fun playing around with him. The same will likely be true of this guy.

This Age of Ultron release also includes everything that came with the STRIKE Suit figure. For starters, that means you get two portraits, one masked and one unmasked. The masked head looks to me like a straight repaint of the STRIKE Suit Cap, while the unmasked is the exact same head, untouched. Both heads are pretty good. The paint on the masked head could be a tad sharper, but I have no serious complaints. The unmasked head is a good looking sculpt, although I’ve got to squint a little to see the likeness. It probably works better as a comic book head than one matching Chris Evans. 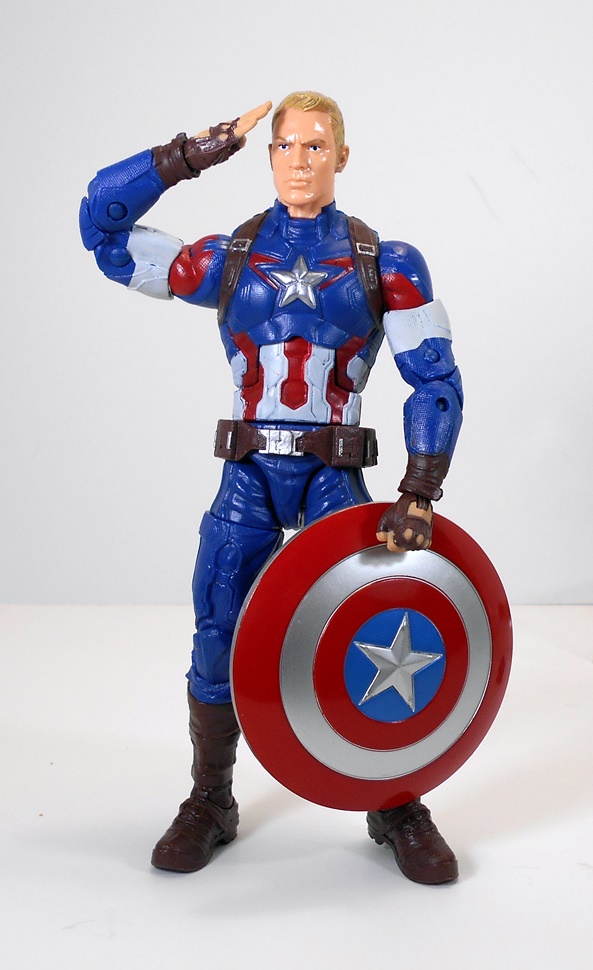 In addition to the two heads, you also get two sets of hands: One pair of fists, one pointing left hand, and one saluting right hand. Again, these are the same pieces that came with STRIKE Suit Cap. I was happy to get them there and they’re welcome here as well. 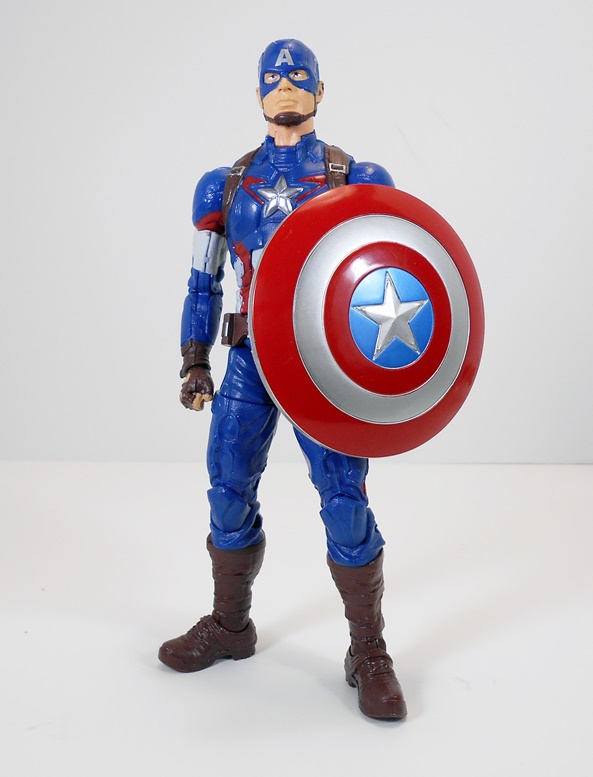 Lastly, you get Cap’s trusty shield, which is the same STRIKE Suit Cap shield, which has obviously been repainted to the more traditional colors. By now I’ve practically got a drawer full of Legends scale Captain America shields, but I think this is one of my favorites because it actually has straps like the real thing, as opposed to the hinged peg and clip system. The paint job on the front is beautiful and the sculpted straps on the inside can slide onto his arm without even removing the hand. On the downside, there’s no way to attach this thing to his back. 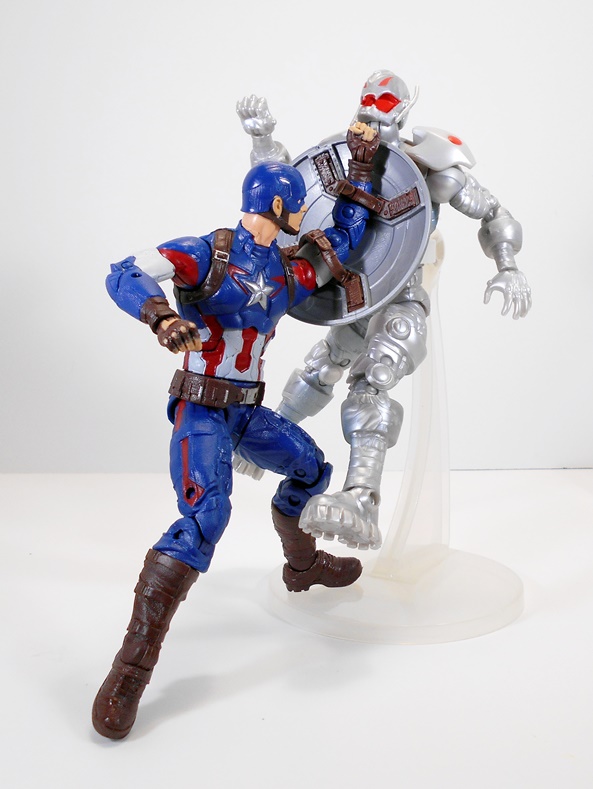 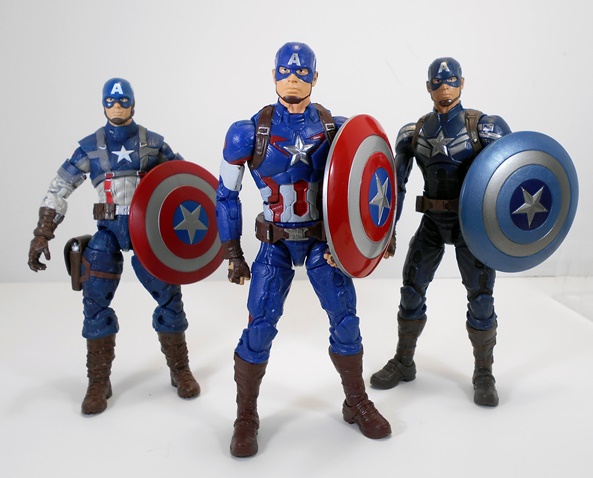 With the crazy number of Legends Captain America figures that are populating my shelves these days, I have to admit that this release didn’t have me all that excited. That having been said, he turned out to be an excellent figure and possibly one of my favorite versions of him in this scale. The sculpt was already a winner and I think these colors work beautifully on it. Plus, getting the extra portrait and hands just sweetens the pot. I’m hoping that when the time comes I’ll be content to own this version of Cap in the Legends scale and save a little money on the Hot Toys, but I won’t know for sure until the time comes and I can see what my bank account looks like.