It’s another Marvel Monday and that means it’s time to open up another Legends figure. Today I’m going to check out the first of the ladies of this wave, Hellcat. Patsy Walker is an interesting character, or at least she has an interesting print history. She started life in a non-superhero comic and existed that way for almost three decades before being established as the alter ego for superheroine Hellcat sometime in the early 70s. I can’t say I’m a huge fan of her character, although I do really dig her costume, so much so that I came damn close to picking up her Bowen statue from a year or so back before the final production piece showed some unfortunate deviations from the excellent looking prototype. Fortunately, Hasbro stepped in and included her in the Legends line, thus allowing me to put her on my shelf for a lot less money.

Hellcat shares her slot in this Wave with another, in this case that other figure is Spider-Woman. These used to be running changes and it was often a bitch to find both of them on the pegs. Thankfully, Hasbro has since come to their senses and are now including both variants in the wave’s case assortment. Apart from making it far easier to complete the wave, all it means to the collector is that you’re going to have an extra set of BAF parts, in this case Thanos’ head. It also means that Hellcat’s name doesn’t appear on the front of the package. Instead all you get is “Fierce FIghters” and it’s not even in the usual place, but rather all the way down at the bottom in smaller multi-lingual print. This practice really fascinates me, especially when used with lesser known characters like Walker. 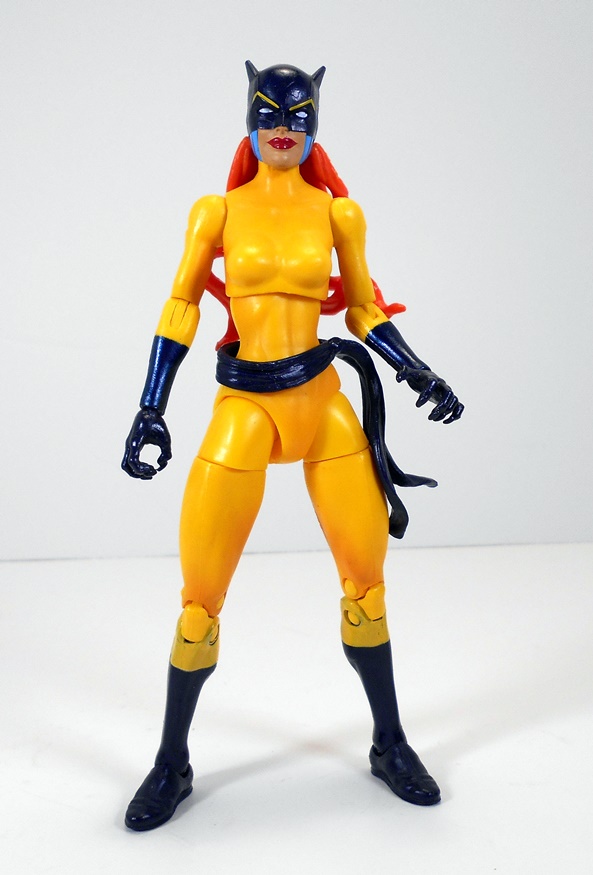 Hellcat is another one of those highly recycled figures and that’s more an observation than a criticism. At first I thought this was just the Ms. Marvel body, but that figure had bicep swivels and Hellcat doesn’t. Maybe they’re just different arms. Either way, this is a generic female buck with the costume painted on. And in this case, the paint is a bit problematic, because the bulk of the body is cast in yellow plastic, but the lower legs and feet are black with a little under the knee painted yellow. Unfortunately the paint doesn’t match. Also note the rather obvious use of the sash from Carol Danver’s Warbird costume.

At least the head is new and it’s a pretty good portrait. The mask is great and she has the pupil-less eyes just like I like them. I especially dig the way they did her hair. It spills out of the back of her mask and just kind of erupts down her back in a red fiery explosion. Nice! 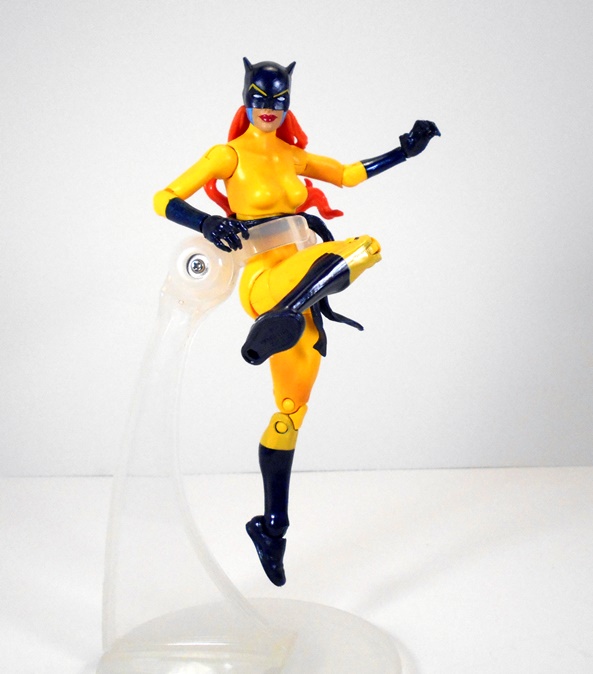 Hellcat is a nimble little kitty and the figure does a nice job of conveying that through her articulation. The arms feature rotating hinges in the shoulders and elbows and wrists. The hinges on the wrists, however are oddly positioned so she can tilt her hands side to side, rather than front and back. Weird! The legs are ball jointed at the hips, swivel at the thighs, double hinged at the knees, and the ankles have hinges and generous lateral rockers. The torso features a ball joint just under her chest and the neck has both a hinge and ball joint. 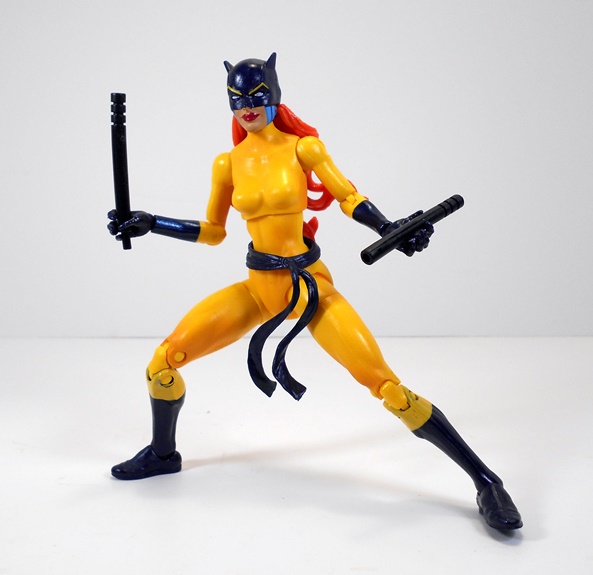 Lest you thought I was done with the subject of parts sharing, it appears as if Hellcat stole Daredevil’s batons and painted them black. These are the same two rods that can be pegged together to form a longer fighting stick. I don’t remember ever seeing Patsy use anything like this, but I’m certainly not an expert on the character. I guess they kind of fit her, so I’m willing to give it a pass. Gosh, I’m in a generous mood today! 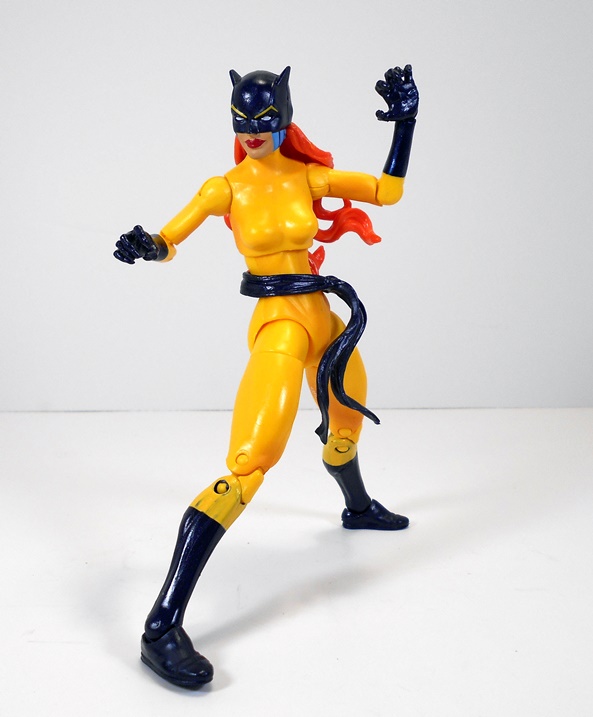 Yes, it seems like the subject of parts recycling is coming up more and more, and I’ll keep standing by my mantra. There’s nothing wrong with it so long as its done thoughtfully and it’s used to get us a figure that we otherwise might not have seen. I think those criteria mostly fit Hellcat. She’s a solid, albeit not spectacular figure and honestly, I’m just so surprised and pleased that we got her that I’m willing to overlook issues like poor color matching. Does that make me part of the problem? Maybe, but holy crap, there’s a Hellcat figure hanging on the pegs. Isn’t that worth a little recycling? To me it sure is. Next Monday I’ll check out Spider-Woman, the last figure in the Wave I need to open before building Thanos!