As usual, I’m scrambling to get in the review of the month’s Club Eternia figure before the month actually ends and in this case that figure is Blast Attak! I was looking forward to this guy because I really dig the more fringe releases and let’s face it, the fringe is just about all that’s left. Blast Attak’s rather late release in the Classics line is fitting since he was a pretty late release in the original vintage line and therefore didn’t get any face time in the Filmation cartoon. As a result, I know very little about this guy and so I must resort to the bio on the packaging. Hey, at least it spares me having to watch an episode of the cartoon.

Note the Snake Men sticker on the front as it offers a hint of Blast Attak’s rather confused allegiances. This “Evil Blast Apart Robot”  was summoned by Skeletor, but stolen and reprogrammed by The Snake Men to serve them. Weird! The figures shown on the back of the card are mostly comprised of Snake Men and naturally Kobra Khan is there to laugh at me because he’s very pricey now and I don’t own him. KHAAAAAAAAAN! 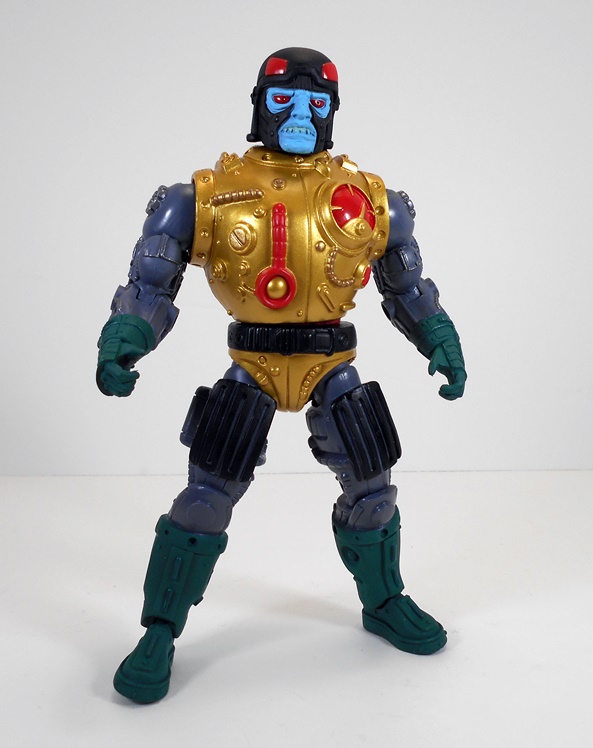 Out of the package, Blasty is just a hodge podge of evil goofiness. I love the retro charm of his gold torso with the big gauge on the left of his chest and all the bolts, hoses, and clamps. It looks like he was pieced together using an old boiler. The arms have all sorts of little techno bits on them. I was so sure they were borrowed from New Adventures Skeletor, but they’re actually just really similar and not recycled, at least not from that figure. The backs of his legs look very robotic and even incorporate the knee hinge into something that definitely looks not human. And you just have to love the giant thigh pads. 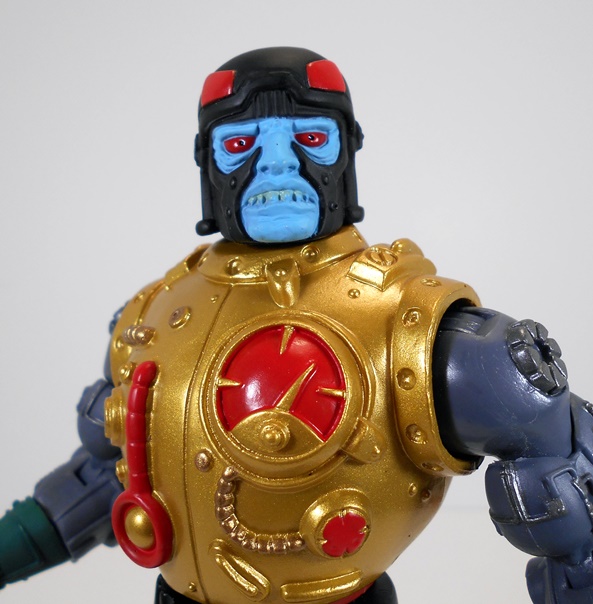 And then there’s that head. It’s a good update to the vintage figure, but I still get that WTF? feeling from it. Why not build a robot with a monster face? It reminds me of that old schlock horror film, Robot Monster, where the robot monster was a guy in a gorilla suit wearing a diving mask. OK, this isn’t that bad and it certainly gives you a great idea of how  wildly creative the people at Mattel were who were designing this stuff. Either that or they just had a grab bag full of ideas that they randomly pulled from. Part of me wants to think that whoever constructed this thing just stuck a dead monster head on top of it and called it a day. One thing’s for sure, Blast Attak looks angry that they took his gimmick away. 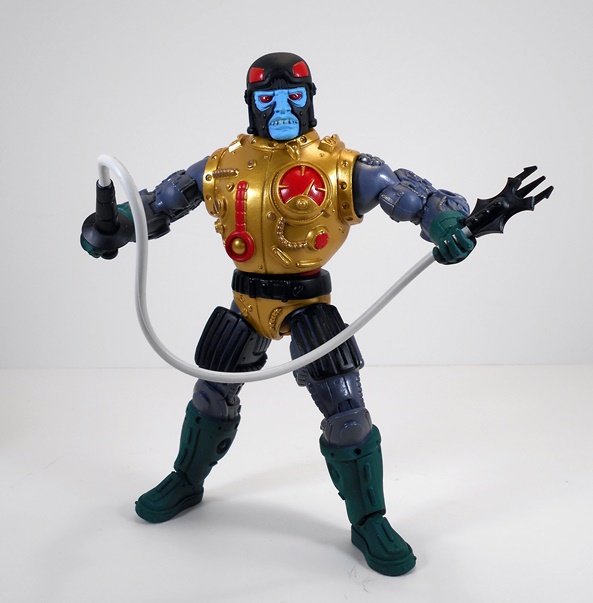 As his name suggests, Blast Attak’s original gimmick was blowing himself up. Yes, this was Eternia’s version of a suicide bomber, only in this case after he ran up to you, gave you a bear hug, and blew up in your face, he could happily reassemble himself and do it all over again. The vintage figure could be blown apart via a cord and mechanism, but that’s way too gimmicky for Matty’s Classics line and so this modern version is robbed of his one signature move. He does, however, come with a facsimile of the detonation cord, which has been cleverly repurposed into a whip.

Blasty also comes with this… whatever it is. I shall call it… The Axetron! It looks like a really over complicated axe and it is indeed the spitting image of the weapon that came with the vintage figure. Honestly, I got nothing. Look at this thing.

Stardard MOTUC articulation applies here. The arms have rotating hinges in the shoulders, hinges in the elbows, and swivels in the biceps and wrists. The legs are ball jointed and have swivels, the knees and the ankles are hinged. Mr. Attak can swivel at the waist, he has a ball jointed neck, and despite the rubber vest, you can still get some use out of the ab crunch hinge that’s buried in there.

If ever you needed evidence that we’re coming to the end of the line, Blast Attak is on the scene. Mattel is pulling out all the stops now and all but the staunchest supporters of MOTUC have called it a day. But not us. No sir. We’re here to see it to the end. Blue faced monster robots reprogrammed by Snake Men to explode is exactly what we all signed up for and something tells me it’s just going to get weirder from here on in. Next month? Sssqueeze!

4 comments on “Masters of the Universe Classics: Blast Attak by Mattel”