As promised, I’m going to be spreading some GI JOE love around FFZ this Summer, so look for this kind of thing popping up every Friday until I run out of stuff in my closet or just lose interest and move on. The main thrust of GI JOE Friday is going to be Sigma 6, but I plan on peppering it with some 25th and 50th Anniversary stuff just to mix things up. Also, because I realize a lot of people hate Sigma 6. Anywho, today I decided to go with the 25th Anniversary Collection’s release of Tomax and Xamot!

Ah, The 25th Anniversary Comic Pack! How I adored you! Unlike the vintage-style JOE Comic 3-Packs from Hasbro, these 25th releases came with only two figures, but that made it a perfect venue to get The Crimson Twins out in this new format. Doubly so when you consider they were originally released as a 2-pack way back when. I can still remember when this deadly duo was released in 1985. I was first introduced to them as part of the Sunbow mini-series, Pyramids of Darkness, which was definitely the weakest of these mini-series for me, but made up for it by introducing Extensive Enterprises. These guys were like nothing in GI JOE before and who didn’t fall instantly in love with their elite troopers, The Crimson Guard? I can still remember finding the twins 2-pack at the mall and successfully begging my father to get them for me. There was a time when Tomax, Xamot, and hooded Cobra Commander were the upper echelons of my Cobra Command leading an army of (well, actually I only had two) Crimson Guards, leaving Destro and Baroness to take their boring old Cobra Troops and fend for themselves. I freaking loved these guys!!

Oh, and f’ck me for not getting on board and ordering that Doc. What the hell was I thinking? 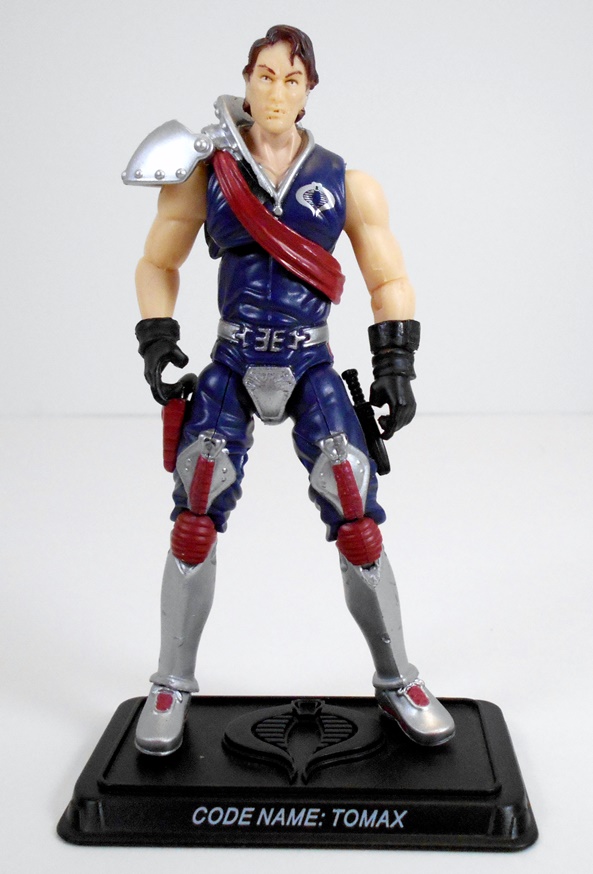 I think a big part of the appeal for me here is the uniforms. Yeah, I thought it was cool how they mirrored each other, but more importantly they were just neat designs. The Twins were kind of like superhero villains the way they would appear all chill in their business suits in one scene and then be charging into battle in their costumes in the next. The sculpts on these guys are quite well done. The cobra-style knee and thigh armor is superb and I like how the shoulder armor is hinged and removable. It stays on pretty well too. And naturally they have to have make each other wear the silver codpieces, because if one gets kicked in the balls the other one feels it! You also get a nicely detailed combat knife and pistol, each sculpted onto the belt. To top it all off, you get some beautifully vibrant colors. The Cobra blue with the silver armor and red sash and accents makes for a fantastic deco. God, I love these uniforms!

The portraits follow the same mirrored pattern as their costumes. It’s the same basic sculpt only with the facial scars on opposite cheeks. They also have the same strands of hair dropping down over the forehead, only on opposite sides. That always gives me a chuckle. Do they actually style it that way? Also, my loose Tomax has some weird black speckling around his mouth. My carded set doesn’t, but that’s not for opening, it’s for hanging on the wall and looking at.

Articulation on these guys is pretty standard from what we got in the 25th Anniversary figures. The arms have rotating hinges in the shoulders, hinges in the elbows. and swivels in the wrists. The legs are ball jointed at the hips, have double hinged knees, and rotating hinges in the ankles. You get a ball joint in the torso and another in the neck. It’s a far cry from the more modern JOES that have come out since, but it’s certainly serviceable. And fortunately, these guys don’t share the problem of arms popping out like some of the figures in this line do. 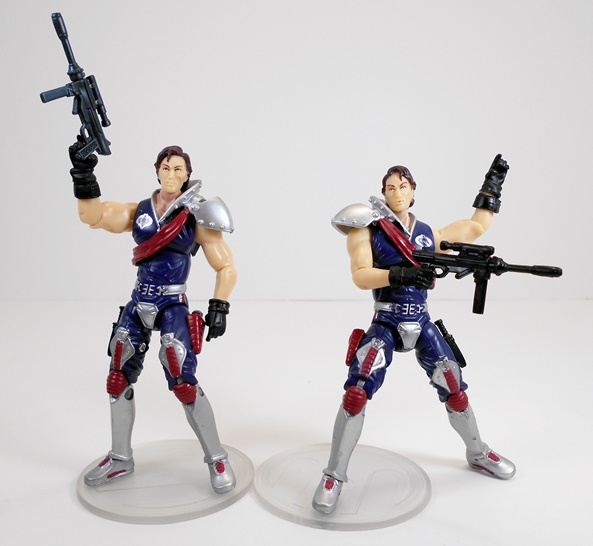 Tomax and Xamot come with their signature weapons, which is something like a laser sub-machine gun. Obviously, they’re the same weapon because… twins! These feel a little oversized to me, but I still dig them well enough. They can comfortably grip them in either hand and witha litttle work you can get them to hold the weapon in both hands. You also get the standard 25th Anniversary Cobra figure stands, with the sculpted Cobra emblems and the personalized name plates. The only thing missing here is the zip line, which I recall coming with the original vintage two-pack. 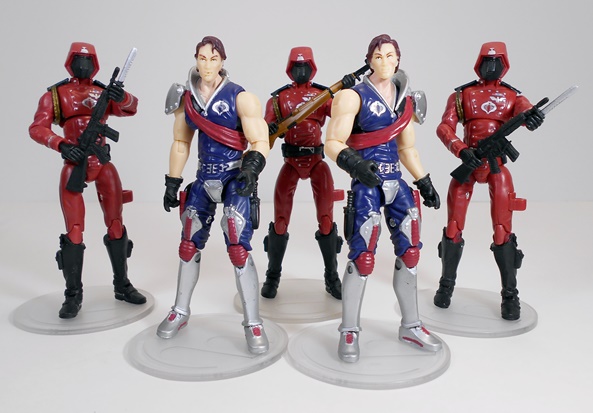 Yes, opening up this pack instantly transported me back to the glory days of 1985 when it was such an amazing time to be a JOE collector. We had brand new teams appear, like The Crimson Twins and The Dreadnoks, and the line was going into such creative and interesting new territory. The 25th Anniversary versions of these guys really scratched an itch and the fact that I found the 25th Crimson Guard figures to be relatively plentiful meant that I could finally have a little squad of these guys to go with my Tomax and Xamot. Ah, good times! Now, I really want to pick up a pair of Cobra Ferrets for these guys to drive around on.