Alrighty, folks, I’m back to check out the second half of Hasbro’s Combiner Wars Constructicons. Yesterday I looked at Scrapper, Mixmaster, and Long Haul and today is all about Bonecrusher, Scavenger, and Hook. Let’s go ahead and take them in that order.

Bonecrusher stays true to form with a bulldozer alt mode, which features molded treads an articulated front plow, and a fair amount of detailed sculpting, particularly on the outsides of the treads. He also comes dangerously close to melting my eyes with all that neon green and showing very little else in the way of color diversity. You get a little silver paint on the side vents, some purple paint on the windows of the cab, and some black on the robot parts showing from the back. All in all, it’s a tight little construction vehicle that rolls along on some wheels concealed inside the treads and pays respect to the original toy. Unlike the trio we looked at yesterday, Bonecrusher actually features some relatively complex transformations, with some pretty impressive results.

The original G1 Bonecrusher was my least favorite of all the Constructicons because his robot mode was awkward and even as a kid it didn’t work for me. This updated version bucks that trend and becomes one of the best this new bunch has to offer.  Most notably, he’s surprisingly well proportioned and best of all he has some of the best articulation in this whole set. You get proper ball jointed elbows and even lateral rockers in the ankles. Oddly enough, the first time I played around with him, I had all sorts of trouble keeping his crotch together, but I haven’t had that problem since. Maybe I just didn’t have it locked together properly.

Bonecrusher features a fantastic head sculpt, which invokes the original G1 character beautifully. The way the back of the plow becomes his chest works remarkably well here and there’s a ton of sculpted detail and paint to reproduce the look of the sticker on the original toy. I can’t say enough how much I love this new silver paint Hasbro is using. It really looks great with the red and purple paint and you get a Decepticon emblem right in the middle of his chest. Beautiful! I didn’t have any high hopes for this guy, but he’s probably my favorite figure in this set, next to Scrapper. 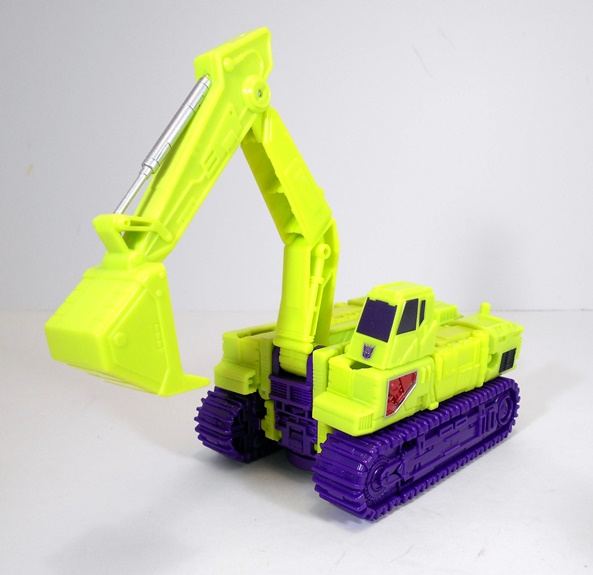 Also running high in my favorites is Scavenger. The alt mode here is a familiar backhoe and thanks to some purple paint on the sculpted treads, he isn’t quite the green-overkill assault on the eyes that his tracked-brother Bonecrusher is. You also get some purple paint on the cab windows, a little silver on the scoop hydraulics, and some red and silver vents on the sides. Sadly, Scavenger cannot pivot on his tracks, but you do get two points of articulation in his scoop arm, so that’s not too bad. Like Bonecrusher, Scavenger has a relatively complex transformation, which results in another great looking robot. 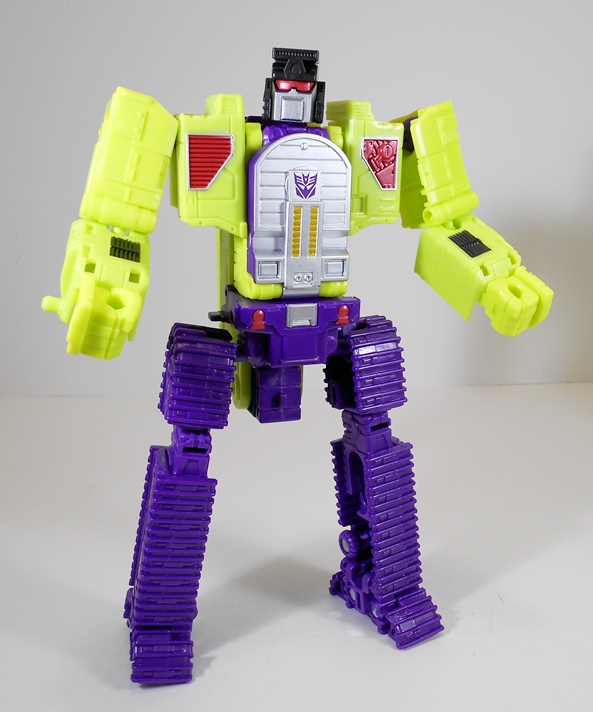 A lot of what i said about Bonecrusher is the case with Scavenger here. The way the treads form the legs is almost identical and while Hasbro could have easily gotten away with repainting and reusing the same treads here, they are actually completely new sculpts, which is cool. Scavenger also features the better articulation with ball jointed elbows. The crane arm folds up into his back as best as can be expected. It’s still rather obtrusive, but surprisingly enough Scavenger isn’t terribly back heavy and I have no problems getting him to stand up.

I’ve never been a huge fan of Scavenger’s head sculpt, mainly because of that weird box that makes up his mouth plate, but I’m still glad that Hasbro reproduced it faithfully here and they did a nice job with it too. The familiar silver plate that makes up Scavenger’s chest is also recreated nicely with more of that beautiful silver paint. 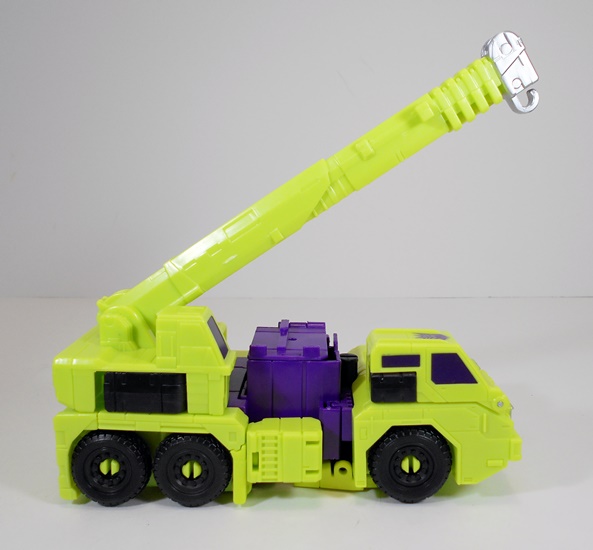 Last up is the leader of the Constructicons, Hook. Again, we get a very faithful recreation of the original G1 vehicle mode, in this case a boom crane truck. Hook features a fair amount of color diversity, at least within the confines of the Constructon deco. You get a lot more purple showing than some of the other figures and also some black on the wheels and side panels, and a little bit of silver on the hook itself. Hook has a bit of an undercarriage, which prevents him from rolling as well as I would like. Also, the crane will not rotate, which is understandable. What’s not as understandable is that the boom doesn’t extend, although it does at least raise and lower on a hinge.

Hook feels like he has a lot in common with Scrapper in the way he transforms and he does have some little drawbacks. Unlike Mixmaster, Hook’s back kibble does drag on the ground, so when he’s standing, he’s usually also leaning on the hook. You can angle it back further if you want him in a deeper stance, so it’s not that big of a problem. One annoying characteristic is the way his feet can pop off when I’m posing him, but at least he does have lateral ankle rockers. The arms technically have elbow hinges, but they’re placed a little too far down for my taste. Plus they’re those weird hollow elbows made up of a hinge on the end. I’m mostly content to just pretend he doesn’t have any elbow articulation at all.

The head sculpt is fantastic and I’m pleased that the plate hovering above his shoulders doesn’t interfere with the head articulation at all. Hook does have a combiner link making up his chest, so his torso isn’t quite as stylish as all the others, but it still looks good thanks to some great sculpting and a little paint work.

And that wraps up my look at the individual bots. I dig these guys a lot and getting them was such an amazing surprise that I’m hesitant to nitpick a lot. Nonetheless, when you look at how great Scavenger and Bonecrusher came out in terms of articulation, I really wish they could have done a better job with the others. I’ll also point out that the lack of individual guns is a huge issue with me, making it more likely that I will be picking up the Takara release later on down the road. Yes, the combiner parts have some afterthought weapon functions, but nothing in my opinion that is worth bothering with here. Nonetheless, each figure has its own charms and they look absolutely fantastic displayed on my shelf as a team. Ah, but let’s face it, the real draw of this set is the ability to build a giant Devastator and tomorrow I’ll be back to do just that!