So, because I’m doing a whole theme week thang next week, I decided to bump Marvel Monday up to today. I’ve just got too many Marvel figures lying on my stack and waiting to be looked at that I can’t afford to lose a week. I’ve only got two figures left in this wave before I get to the Ultron BAF and today is all about Eric Williams, aka Grim Reaper!

There’s the obligatory packaged shot and since I have nothing new to say about it, I’ll take the time here to point out that Grim Reaper is another one of those Legends figures that Hasbro has also recently produced in the Universe/Infinite 3 3/4″ scale. Considering that both releases are the same version of the character, I’ll likely be referencing that other figure at least a couple of times. I’ll also point out that I was very happy to see this guy get released in the Legends scale and I really dig how he was handled as a semi-regular baddie in the Earth’s Mightiest Heroes cartoon. 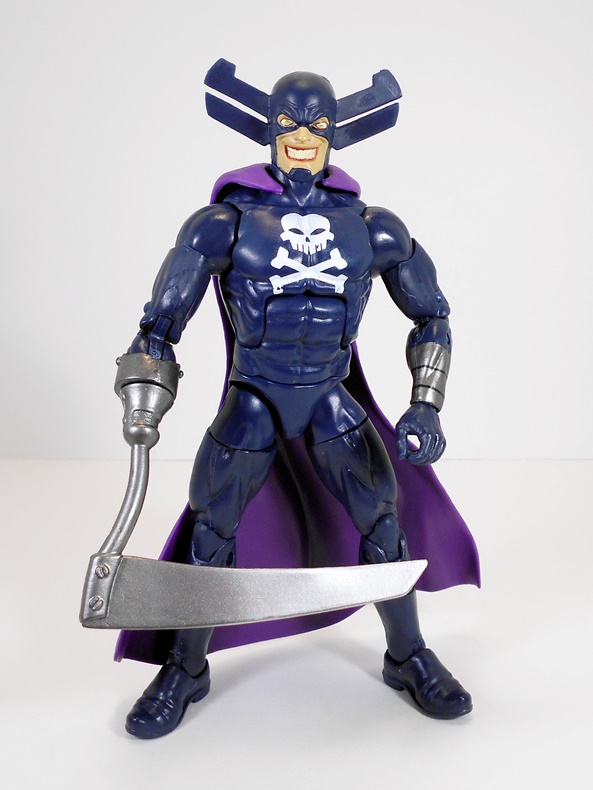 Grim Reaper’s costume is comprised mostly from a painted buck and there isn’t a whole lot of paint. You get a very dark blue body, which is missing some of the paint highlights that the smaller version had. The skull and crossbones is printed on his chest and despite a little chip on one of my bones, it looks fine. He has a silver wrist bracer painted on his left arm and the trademark scythe grafted onto his right arm by The Tinkerer.

If you read my look at the smaller version, you may remember my biggest gripe there was the lack of a swivel in the scythe and I’m happy to report that this Legends figure has it. It’s also worth pointing out that the design of the scythe is a little different here. It’s missing the sharp point and looks more utilitarian. You also get a cape that pegs into the back of the figure and is a lot less obtrusive than the wide, billowing plastic garment that came with the smaller version.

The current Legends line have given us some pretty epic maniacal villian portraits. We saw a good one last week with Tiger Shark and who can forget the mug on Constrictor? Well, Grim Reaper follows along in those footsteps with a head sculpt that just oozes personality and batshit craziness. I thought the Universe version was great, but this one definitely ups the ante. I get the feeling that the sculptor really has some fun with these and it is most definitely appreciated.

Articulation here is what I’ve come to expect from the Legends line. The arms feature rotating hinges at the shoulders, double hinges in the elbows and swivels in the biceps. The scythe has the aforementioned swivel at the base and the left hand has a rotating hinge. The legs are ball jointed at the hips, double hinged at the knees, with swivels at the thighs and tops of the boots. The ankles are hinged and have lateral rockers. You also get a swivel at the waist, an ab crunch hinge in the torso and the neck is both ball jointed and hinged. While he’s a lot of fun to play around with, Grim Reaper does suffer from some pretty soft hinges the elbows.

Hasbro has been pretty good about getting us a fair number of villains in their modern Legends line and I say keep them coming! Afterall, what good are superheroes without costumed bastards to fight? And that philosophy makes Grim Reaper a fine pick up for my collection. And yeah, it doesn’t hurt that doing so furnished my BAF Ultron with his left leg. That’s five down and Only one more figure in this wave to go! When Marvel Monday returns the week after next, I’ll check out Giant Man!