There’s a shitload of figures coming to me from Matty for the month of August (I think it amounts to three figures and a pack of heads), so I guess it’s well past time I finish opening up and looking at July’s figures. Today we’re checking out another one of the Princess of Power ladies. She’s Peekablue, and she may be half peacock, but she’s all woman. Wait, what? 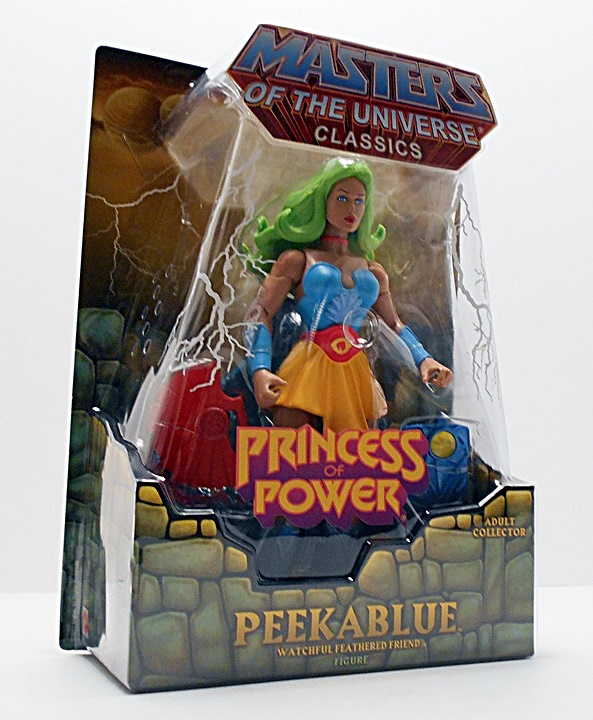 The packaging tells us that Peekablue is our “Watchful Feathered Friend” and sports the PoP sticker on the package. If I flip the package over and look at the other figures on the back, I can see that I’ve got a clean sweep. All of those are on my shelf. Yes, sadly that includes that terrible Double Mischief figure.

It seems appropriate to be looking at a figure like this now at a time when a major retailer like Target is sanitizing their toy department and making it “gender neutral” by removing gender specific aisle markers and replacing blue and pink aisle paper with neutral brown. Hey, why not go all the way, Target? Put the Barbies in with the Transformers. Why are you still segregating them by aisles? I’m kidding… a little bit. It just seems like an empty gesture to appease some loud mouths concerned over something that I didn’t even know was an issue. I’m a 43yo male about to review Peekablue. Granted, she’s not sold in stores, but if she was, I wouldn’t care what color the aisle was I bought her from. 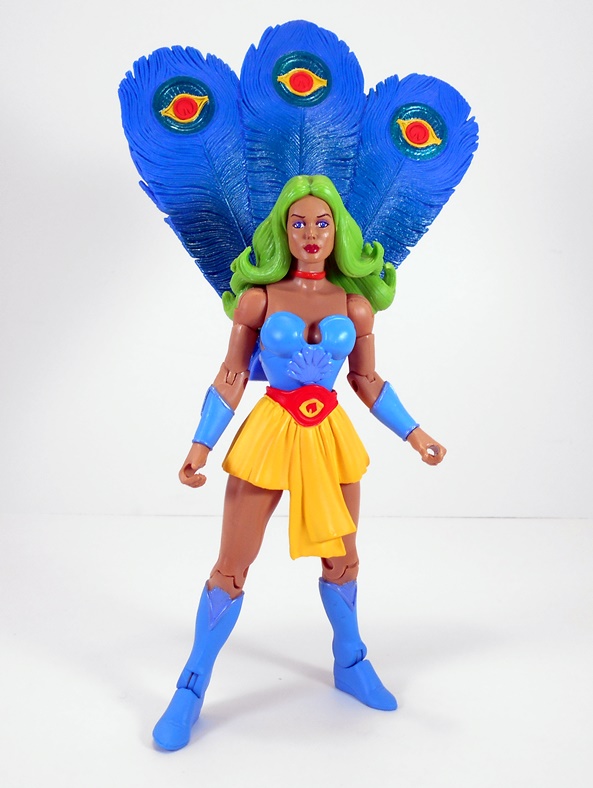 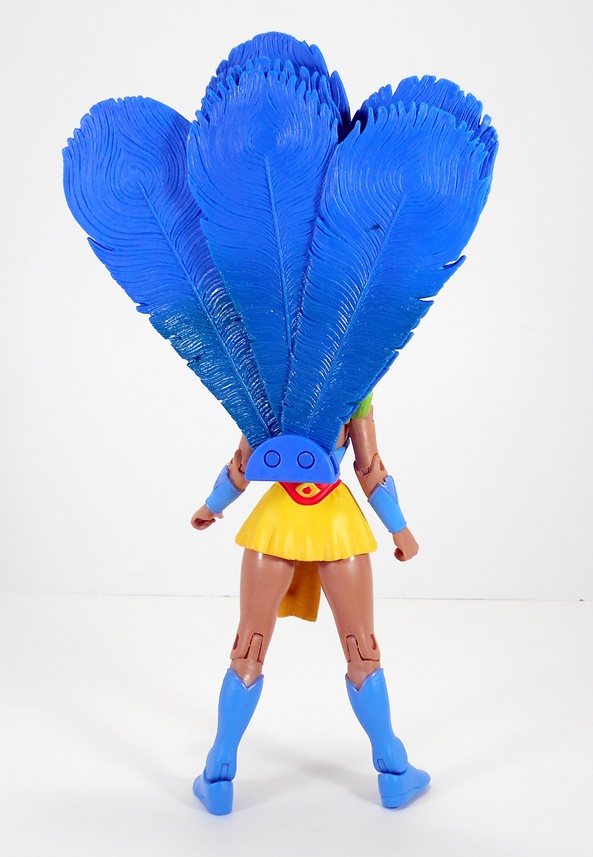 So, Peekablue is a green haired chick with a full spread of peacock feathers on her ass. I got nothing. That’s it, folks. Thanks for reading. …OK, so seriously, as batshit crazy as this sounds, it’s just another day in Etheria or Eternia where hot chicks with animal parts can walk down the street and nobody thinks twice about it. I think what’s most creepy about this arrangement is that the bio points out that all of those patterns on her peacock tail are actual functioning eyes. Forget classifying this as a girl’s toy, the more I think about it, the more I realize it’s actual body horror. What’s that? Yeah, I suppose I should actually talk about the figure…

Peekablue features a colorful outfit, with a blue top, boots, and arm bracers, a red belt, and yellow skirt. She’s got some peacock motifs sculpted into her top and boots, although at a quick glance they could look just as much like shells, I suppose. The skirt is a nice piece of sculpting and her belt features an eye sculpted in the middle. I wonder if that one is real too!

The peacock tail plugs into the back and is hinged in two places so it can close up a bit. The sculpting and paintwork on this thing is especially nice. All the little feathers are sculpted in and there’s a shimmery blue and green deco with each of the eyes painted red and yellow. Surprisingly, the figure can still stand pretty well despite the huge peacock backpack. 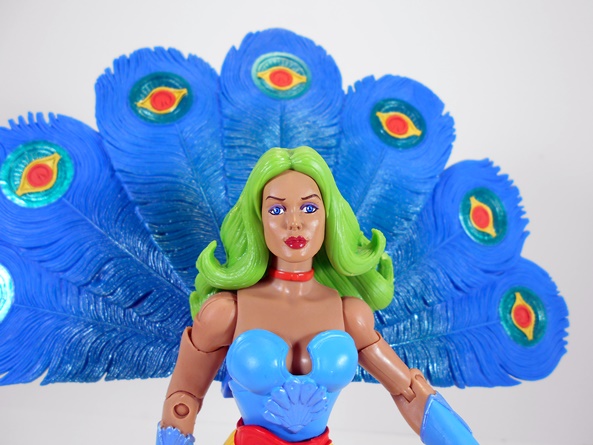 The portrait here is solid. It escapes the angular cheeked, flat faced sameness that sometimes characterizes the MOTUC women. She’s pretty, the paint is very clean and her cascade of green hair is wonderfully sculpted.

Other than the hinges in the peacock tail, articulation is right in line with the rest of the PoP ladies. The legs feature ball joints in the hips, hinges in the ankles and knees, and swivels up at the top of the thighs. The arms have rotating hinges at the shoulders, swivels in the thighs and wrists, and hinges in the elbows. She can swivel at the waist and the head is ball jointed at the neck. 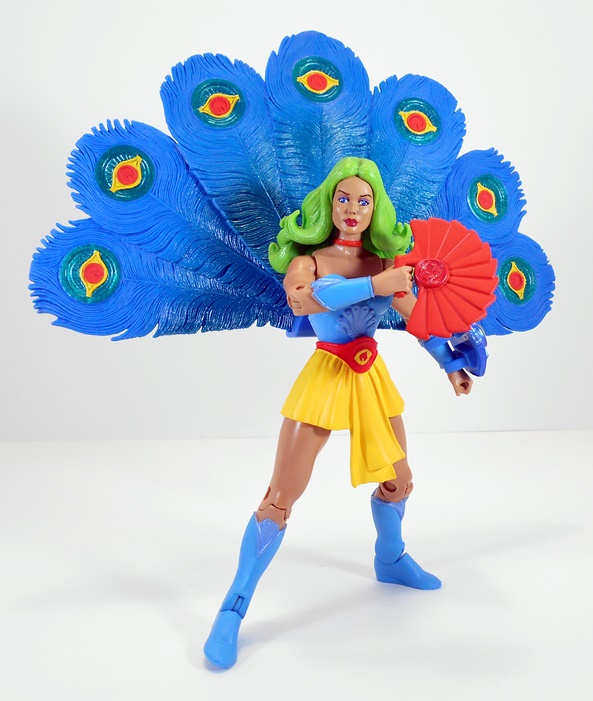 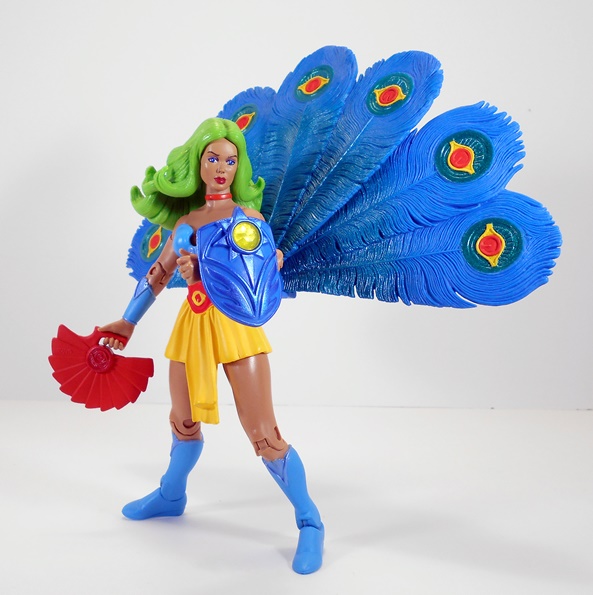 Peekablue comes with two accessories. You get the usual PoP shield, this time in blue with a yellow crystal. She also comes with what looks like a folding fan, but I imagine is supposed to be some kind of bladed weapon.

I make it no secret that I love the PoP related figures and Peakablue is no exception. With a nice sculpt and a strikingly colorful paint job. She’s just so delightfully ridiculous and makes a great addition to the crazy members of The Great Rebellion. Not being a collector of the vintage line, I have no idea how many PoP characters are left for Matty to re-create as Classics, but I’m going to be a sad puppy when they’re finally done.