It’s Transformers Thursday on a Friday, folks, because I spent a little too much time at The Pub yesterday to work on any content. Fortunately, I’m doing my drinking at home today so we’re all good and I’m even going to bump my planned Feature for today to tomorrow so I don’t miss anything. Today I’m embarking on my look at The Protectobots. I was originally going to hold off and get these all in Takara’s Giftset when it comes out later this year, but then I saw a couple of them at the store and I lost my Saving Throw for Willpower. I’m kicking things off with Blades because unlike a lot of Transformers collectors, this is my first time with this mold on account of me skipping Alpha Bravo.

Hasbro is winning me over with this packaging, not so much because of the design, but because they’ve started packing comic books in with the Deluxes again. YAY! I will confess I haven’t had time to read this one and the Combiner Wars stuff hasn’t been my favorite chapter in the ongoing Transformers story, but hey… Free Comic!!! On the downside, the blurb on the back suggests that Blades is some kind of bloodthirsty animal and engages in “chopper kung fu.” Oh, no… Hasbro. No no no no no no no no. Nope. Please, don’t ever say that again. It’s stupid.  Blades comes packaged in his robot form, but we’re going to start off with his alt mode.

Yes, it is indeed a helicopter and a pretty solid one at that. I have what could be possibly called a helicopter fetish in that I have a lot of books about them, I was raised on episodes of Airwolf, and I even did a whole week dedicated to Transformers helicopters here on FFZ, many years ago. So, I don’t want anyone to think that I’m anti-helicopter because I didn’t pick up Alpha Bravo. I just didn’t want a helicopter in with my Aerialbots. I was more than happy, however, to pick up the mold as Blades and I like this chopper a lot. The red and white deco is really attractive and is held dutifully in check by the grey parts. Blades also has a really cool “Autobot Coastal Patrol” emblem on his tail stabilizers and he’s got RESCUE written all over him, which helps calm the panicking disaster victims who see a helicopter coming at them loaded with missiles. “Attention Puny Humans. I come to help! These are Helping Missiles.”

I dig that the hand/foot part can be used as a stand and it even sort of works as extra guns if you don’t mind a lot of junk hanging off the bottom. And just in case a six-pack of missiles isn’t enough armament for your “rescue” chopper, you can even attach Blades’ weapon to either side. All in all, I really like what we got here, but then generally speaking Transformers choppers have good alt modes and things start to go wrong when you transform them. Remember Blazemaster from a few years back? Holy shit! Let’s hope Blades fares better. 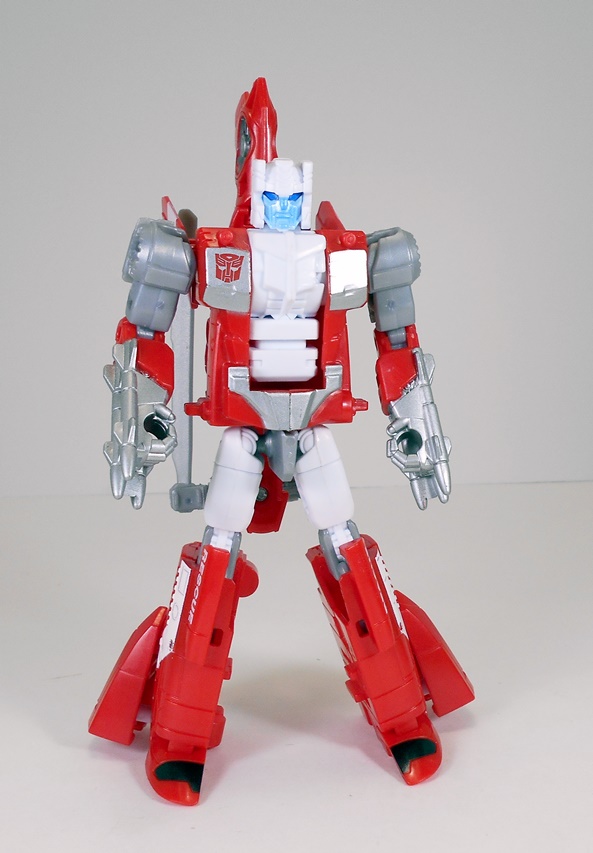 And yes, he absolutely does. If clean looking robots are  your thing, then Blades may be one of the best helicopter Transformers we’ve seen in a while. In fact, looking at him from the front, he’s nicely proportioned and relatively devoid of any horrific chopper kibble. Pictures of him show the chopper tail bent to the side behind his back, which actually bothered me, because I like symmetry in my robot designs, so I was happy to see that you can leave it pointing straight back, because that’s what I prefer to do. 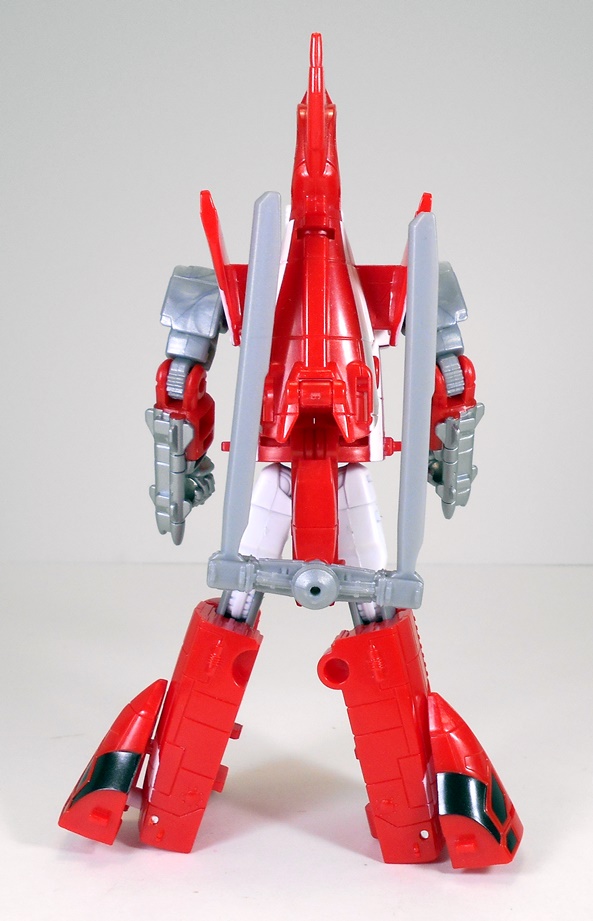 The back side is another story. Here’s where all that pesky chopper kibble is hiding, but it still isn’t too bad. In fact, my only complaint would be the rotors. They really needed to clip somewhere. As it is, I can tuck them on the insides of his tail fins, but they don’t stay put and they do tend to shift around a lot. It’s the only really disappointing thing to me about this otherwise solid robot mode. 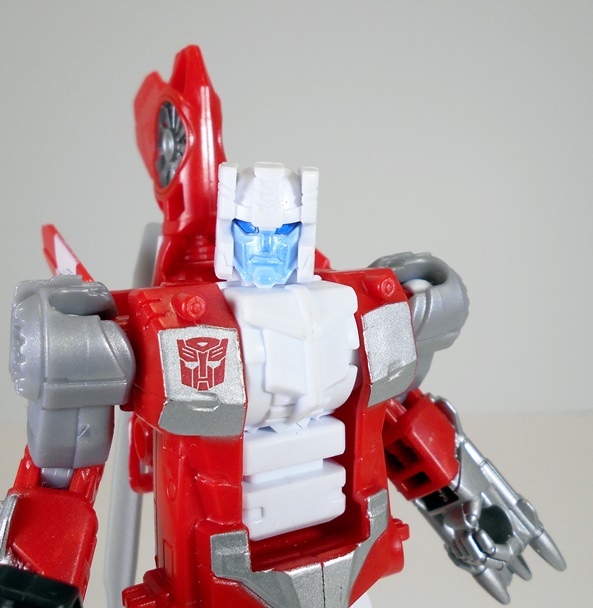 Of course, Blades still has the ubiquitous combiner port chest, which is something I’m sort of getting used to. He also has a nice Autobot symbol stamped on the right of his chest. The head sculpt is great, although Blades looks a little angry for a rescue chopper. The blue paint on the face looks good as does the darker shade used for his eyes. 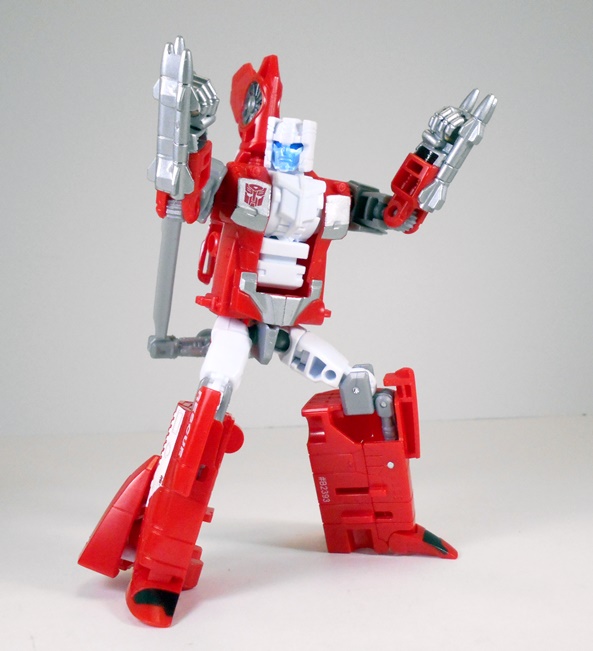 I absolutely love how the missiles from his chopper mode wind up on his arms in robot mode. I get the idea that this guy does his protecting by murdering the shit out of anyone trying to hurt people. It’s sort of a preventive measures kind of deal. Maybe not in character, but I’m all about bad-ass Autobots so I can get behind it. His hips are a tad too narrow for my liking, but that’s a minor quibble and with ball joints in the shoulders and hips, rotating hinges in the elbows, and hinges in the knees, he’s got some fun and useful articulation. 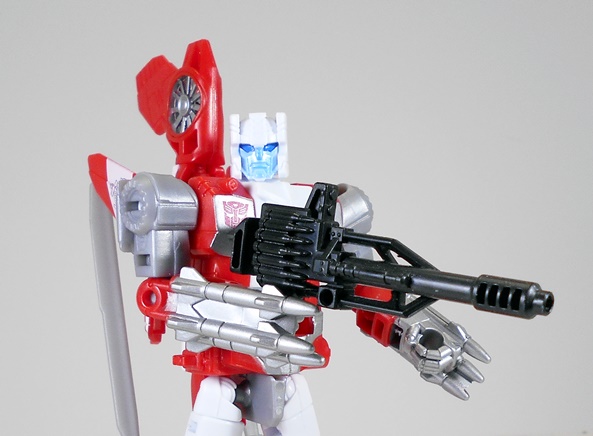 What’s that? You want your Protectobot to have more killing power? Well, fear not because Blades also sports a seriously cool looking gun. It’s the same one we saw stuck onto his chopper mode and I totally dig this piece. It’s got a wicked looking muzzle suppressor and sculpted ammo on the sides. Why does a laser gun need ammo? I don’t know, but the concept worked well enough for me in the Fall/War of Cyberton games.

So, yeah, this is a surprisingly good mold and one that I’m happily now able to embrace because it isn’t being forced on me as an Aerialbot. I’m actually impressed that Hasbro’s designers were able to keep the same aesthetic as the other combiner limbs and make it work with a helicopter alt mode. This is simple, but clever engineering and just all around solid design in both robot and alt mode, and that’s pretty much been the case for all the Combiner Wars Deluxe Class figures. I’m off to a great start with the Protectobots and next week I’ll keep the ball rolling with a look at Streetwise!

One comment on “Transformers Combiner Wars: Blades by Hasbro”