It’s day two of Force Awakens Week and today I’m checking out the second figure of the 6-inch Black line, or should I say figures, plural, because Rey also comes with that damn volleyball that everybody seems to be so smitten with, BB-8.

I just talked about the packaging yesterday, so I’m not going to dwell on it, other then say again that I love the changes they’ve made to the deco. The blurb on the back doesn’t give us a lot more insight into who Rey is, although I’m going to assume she bumps into Finn and gets swept up in the adventure. 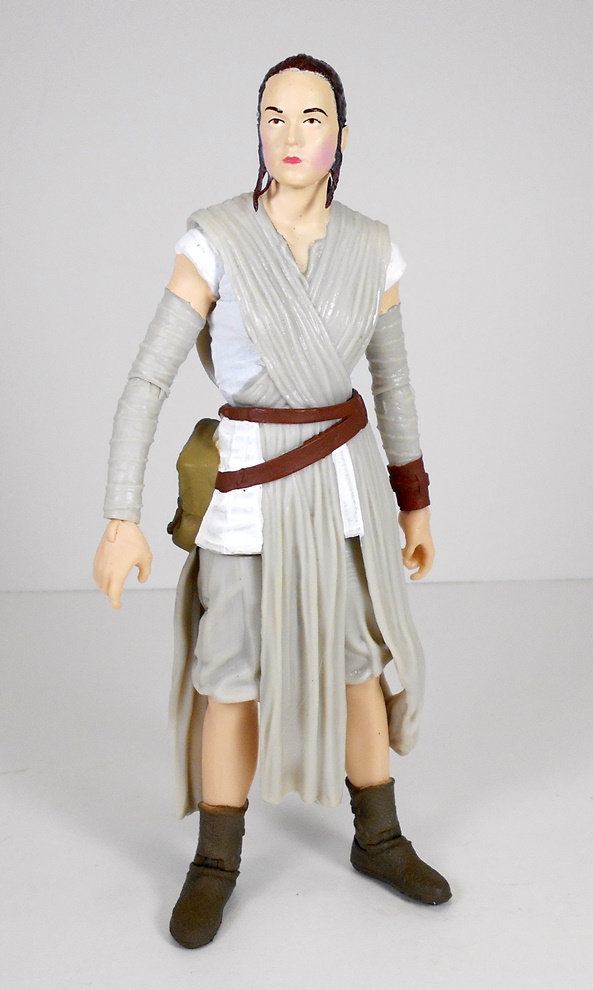 Rey comes clad in her garb native to the desert planet of Jakku. I like the fact that we’re revisiting a desert world because by now that’s just a big part of Star Wars imagery. I’m also glad it isn’t Tatoooine again, because I think that planet has been overused enough and risks making Star Wars too parochial in its scope. Hasbro went for all plastic here, rather then adding softgoods. While I’ve bemoaned the lack of softgoods robes in the past, I think they made the right choice here and overall I think Rey’s desert wraps looks quite good. The layers are convincing and you get to see a little leg between the bottom of her robes and the her little boots. She’s also sporting a satchel on the side of her belt. 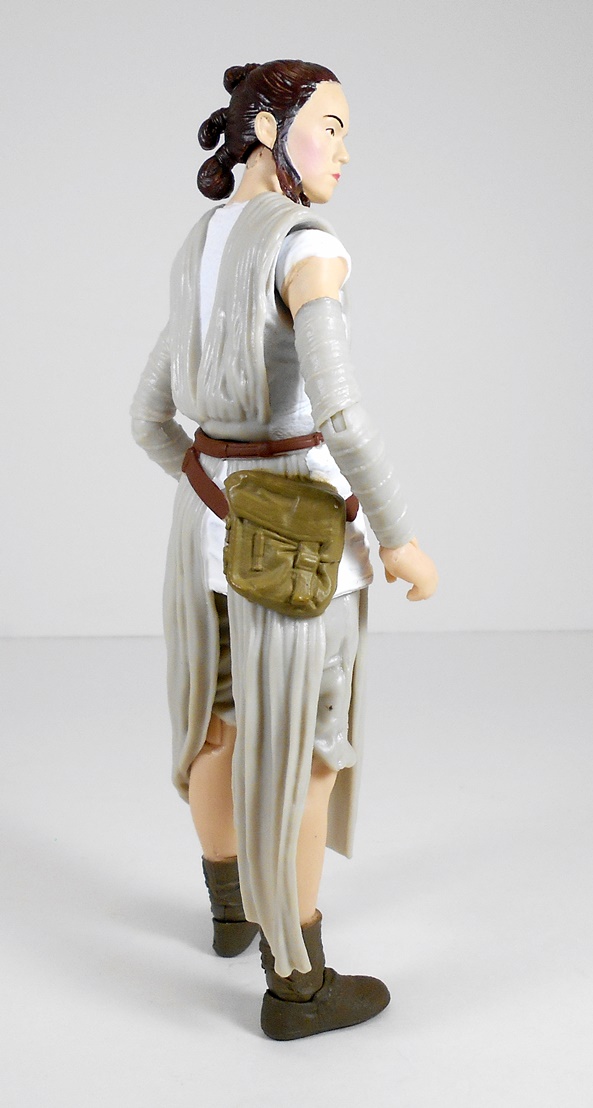 I’m sure I’m not alone when I admit that I happen to think Daisy Ridley is just aggressively cute. She also happens to look especially captivating in some of those stills from the trailer. She’s got an amazing range exhibited by her intense presence in the trailers to seeing her exuberant smile in the behind the scenes clips. Can Hasbro possibly capture all that attractiveness in the portrait of a 6-inch scale figure? No, of course not. It was never going to happen. Now, I will say that I’ve seen some really good examples of this noggin and some bad ones and I probably got a middle of the road example. I’ll also say that this is a figure that looks better in person. The rouge on her cheeks isn’t as apparent and her eyes are better defined. There’s a decent determined expression there, a little bit of likeness and at least the paint on mine is pretty clean and straight. The three ponytails are pretty wild, but I don’t suspect they’ll replace the Leia Buns in the annals of iconic sci-fi hair style. Whatever the case, I wouldn’t call this a great portrait, but I suppose it could have been worse. Just ask Carrie Fischer about that. 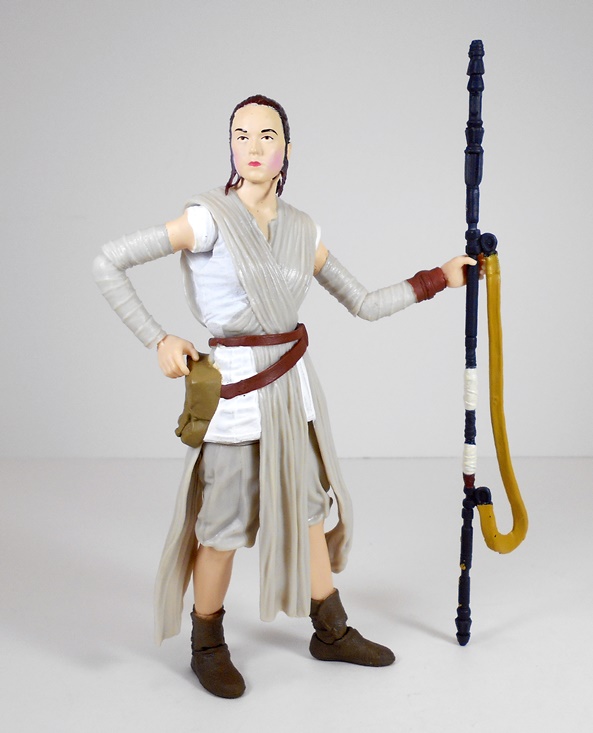 Rey’s articulation is decent on paper, but runs into some classic issues vis-a-vis those sculpted robes. The arms have rotating hinges in the shoulders, elbows, and wrists, and all is fine and dandy there. The legs are ball jointed at the hips, have rotating hinges in the knees, and both hinges and lateral rockers in the ankles. There’s a ball joint at the waist and the neck has both a ball joint and the hinge. You’ve probably guessed the problem here, the hips don’t have a lot of movement and that’s a shame. I can’t quite get her into a running pose, but maybe a trot. 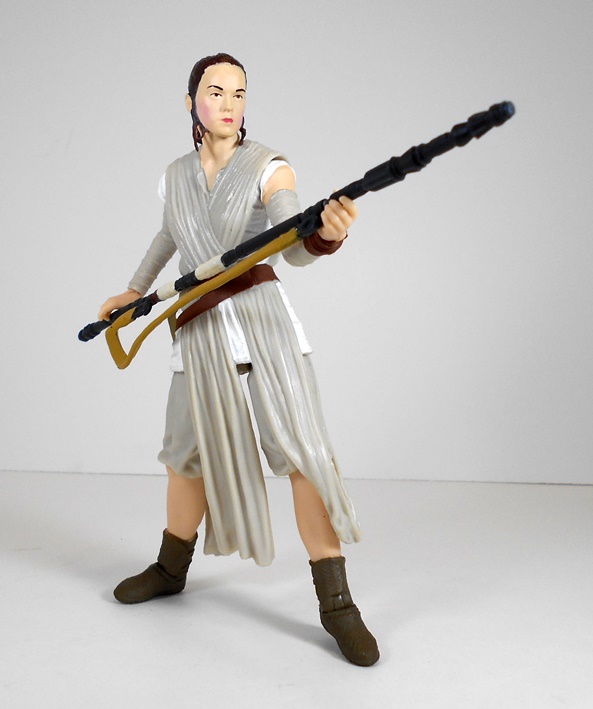 As far as accessories go, Rey comes with a staff thing, which may be a gun or a stun rod or some other spacey thing. Then again, it may just be a pole. There’s some nice detail sculpted in there along with painted wraps and a sling. Oh yeah, there’s one more accessory… 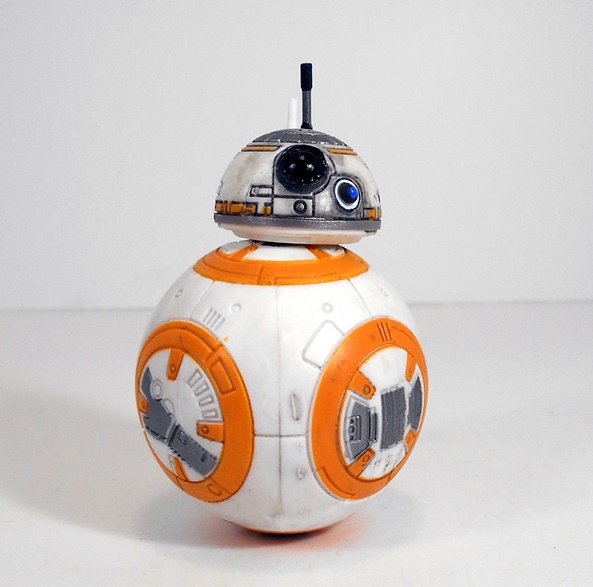 This thing, BB-8! This ridiculous ball of cute has really taken people by storm and if my Twitter feed is any indication, the various plastic versions of this goofball are the better selling pieces of Star Wars tat. I wasn’t a fan when I first saw him, but he’s growing on me and I’m reserving final judgement until I see him in action.

As for his figure, this thing is remarkably well done. All the detail in the body and head is actually sculpted in and the paint, especially on the head, features a great weathered look. The head can turn and it’s posted on a ball joint, so you can shift it any direction. The whole figure is weighted so that if you’re patient you can get it to sit in a number of different… um, poses, by adjusting the head as a counterbalance. I guess the real question is, why did we get him with Rey and not with Poe Dameron? 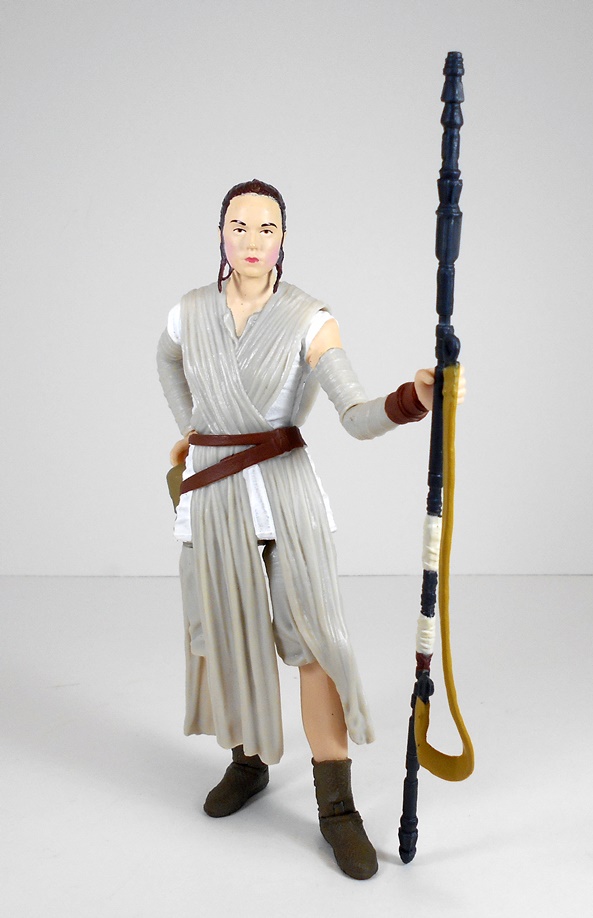 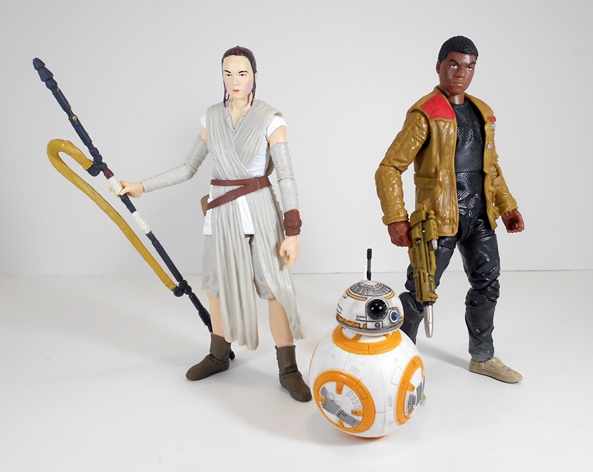 I expected Rey to be a total dud, but I’m actually fairly pleased with this figure. It’s a bummer about the hip articulation being limited, and there’s plenty of room for improvement in the likeness, but overall she’s still better than I expected. I guess, there’s something to be said for low expectations. I’m hoping we get her in other outfits… assuming she wears others in the film. BB-8, on the other hand is just a little plastic ball of cute. And with the hero portion of this assortment wrapped up, I’ll say that I’m excited to get Poe in hand and I’m still hoping for a geriatric Han Solo. Tomorrow, we turn to The Dark Side and take a look at Kylo Ren!