Yesterday I took a look at Hot Toys’ Rocket Raccoon and, as promised, today I’m back to look at his giant buddy Groot! We already checked out the packaging, so let’s just jump right in… 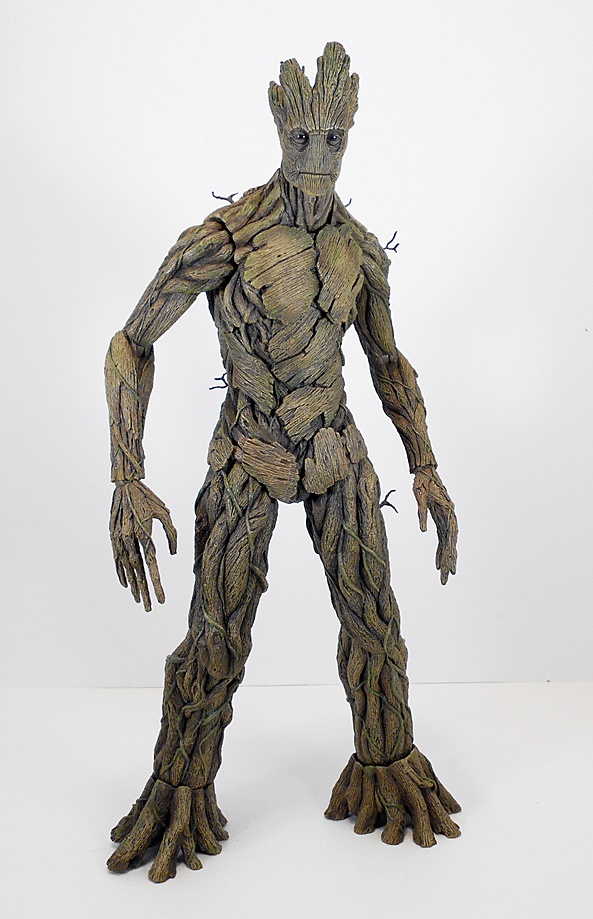 Hoo boy, is this a big and weighty figure! Even with a bit of a hunch, he stands a full head and shoulders above your average human sized Hot Toys figure. That’s doubly impressive considering that every tiny spot of this figure is covered with sculpted bark. The look and texture of Groot’s skin is beyond realistic. When I touch it I fully expect to feel wood rather than plastic. And it’s not just the wood grain on his skin, but the vines and tendrils that wrap around his arms and legs and the little sprigs that randomly crop out form various places on his body. This is a sculpt fashioned with love. I have no doubt of that! 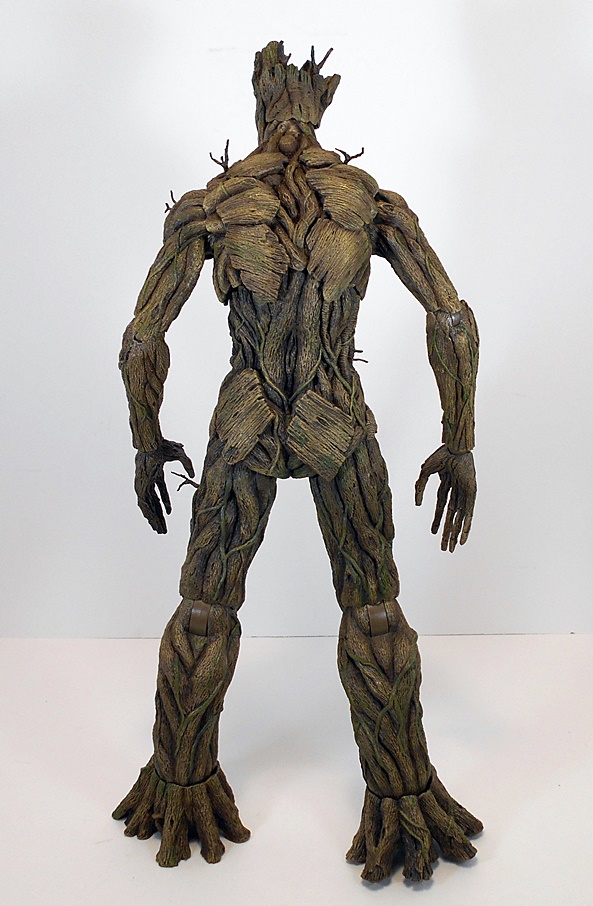 The paintwork is also phenomenal. There are subtle shades of brown for the bark and green for the vines. I think my favorite thing about the paintwork, however, is the little hints of green around some of the bark pieces, which looks like moss growing on an overturned log. Simply stunning. 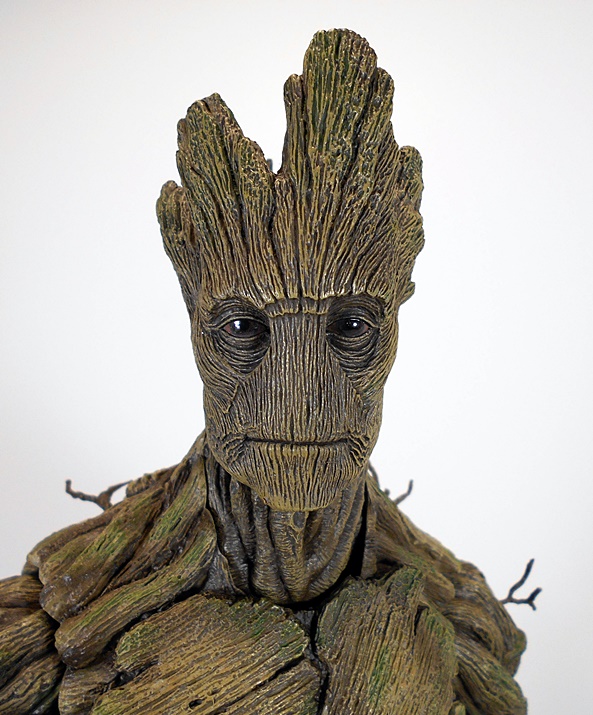 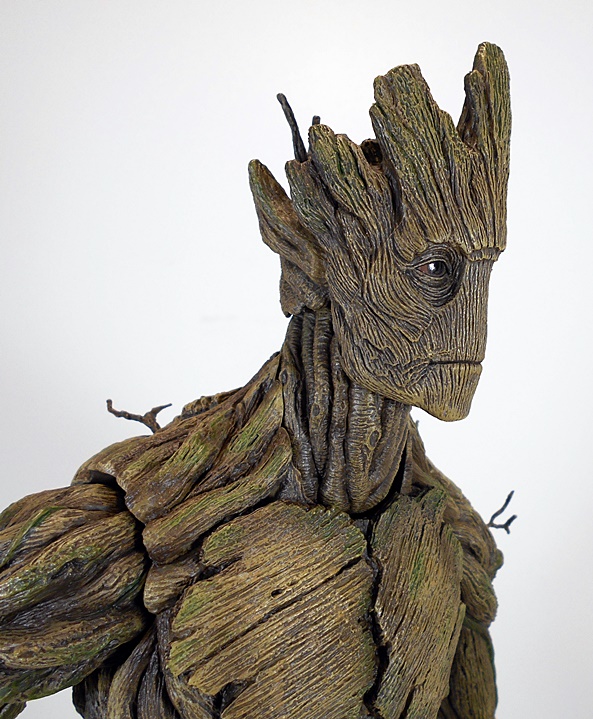 The stock portrait is Groot’s regular stoic expression, which is a dead ringer for his big screen counterpart. Again, it shows that the wizards at HT are not only good with human likenesses, but can recreate just about anything in plastic. The painted eyes definitely have that spark of life and while I don’t like to throw the word around to often, this portrait just strikes me as perfect. 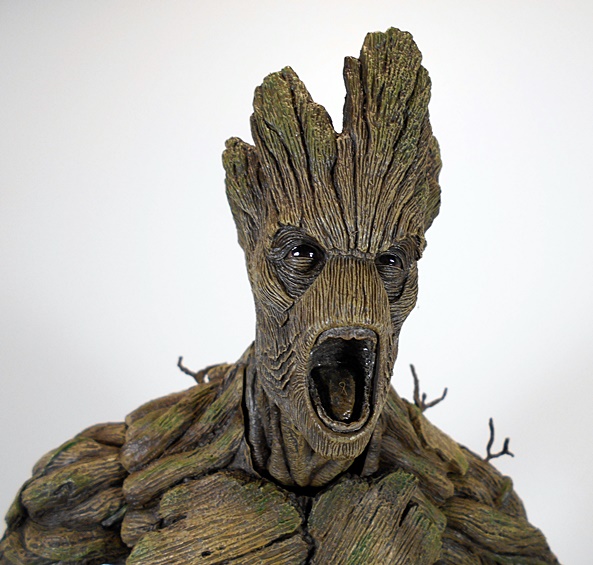 The alternate portrait, which I believe is a Sideshow Exclusive, is his angry face, and boy you don’t want to get Groot angry. In this case, it’s not a complete head swap, but rather the front of the face comes off, sort of similar to the way Figuarts and Figma does it. If you’re going for an action pose on the shelf, this portrait really sells it. 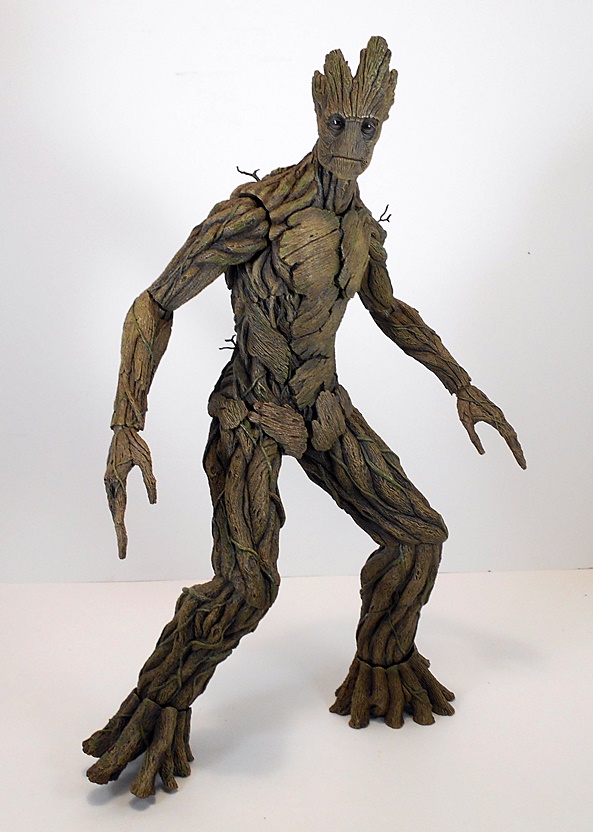 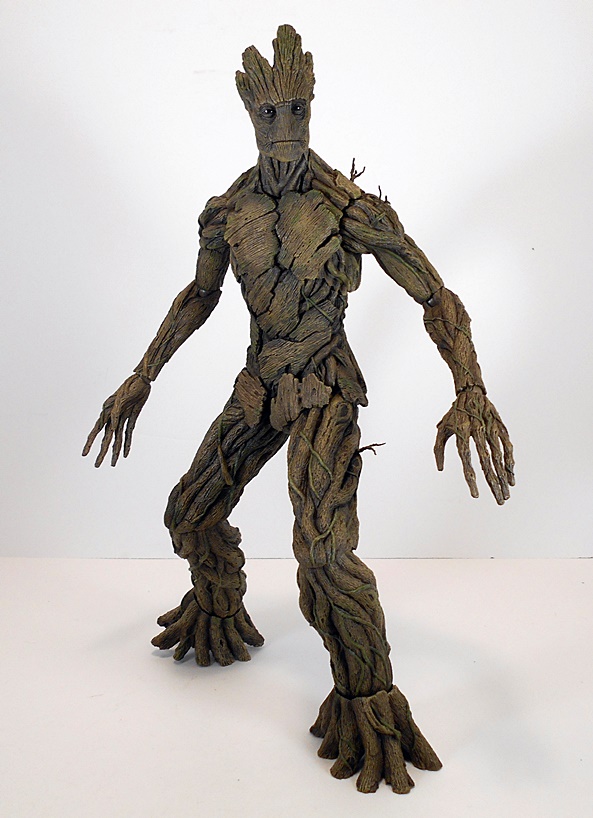 Articulation consists of a lot of really chunky and powerful rotating hinges. He also has a ball joint in the upper chest. While the smooth hinges are visible in the elbows and the backs of the knees, Hot Toys went a long way to try to conceal the rest. The hips, for example are shielded by some bark plates attached by hinged arms. I love the little touches like that! 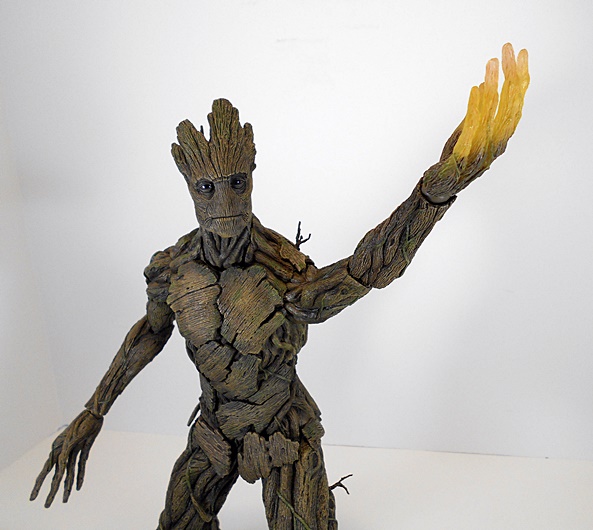 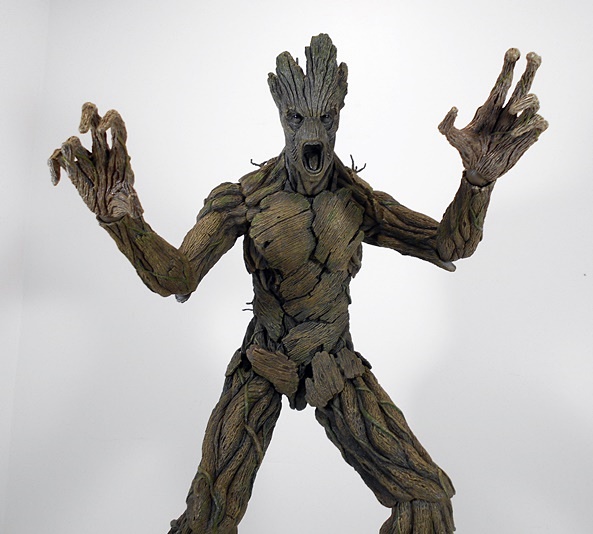 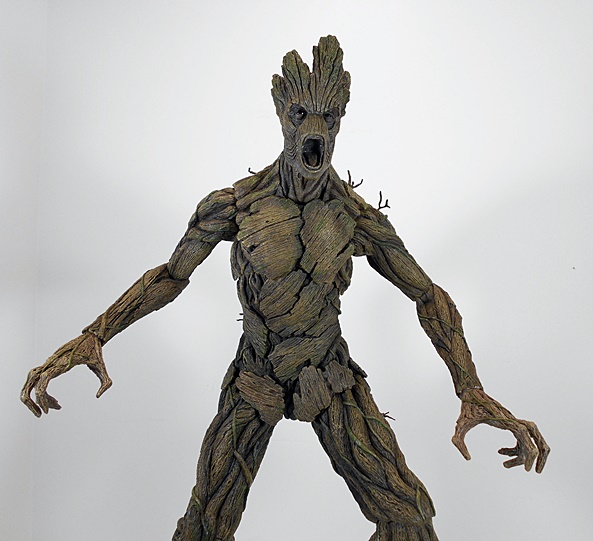 In addition to the extra portrait, Groot comes with some extra hands, of course! The figure has a pair of relaxed hands attached when he comes out of the box. The second pair are angry, grabby hands. You also get an extra right hand with translucent fingers to simulate him blooming those glowy spores. You also get an extra pair of wrists posts in case you snap one off. Good thing too, because I snapped one off. With nearly 20 Hot Toys figures on my shelves, that’s the first time I’ve ever had that happen to me. 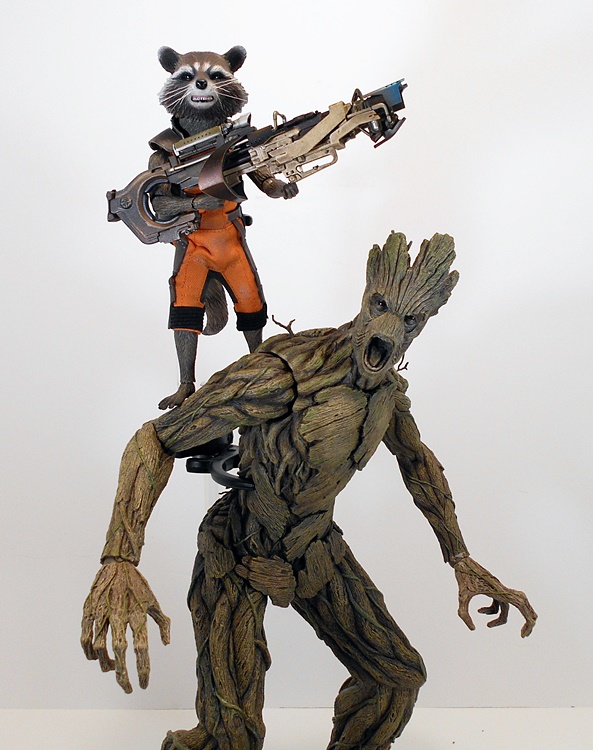 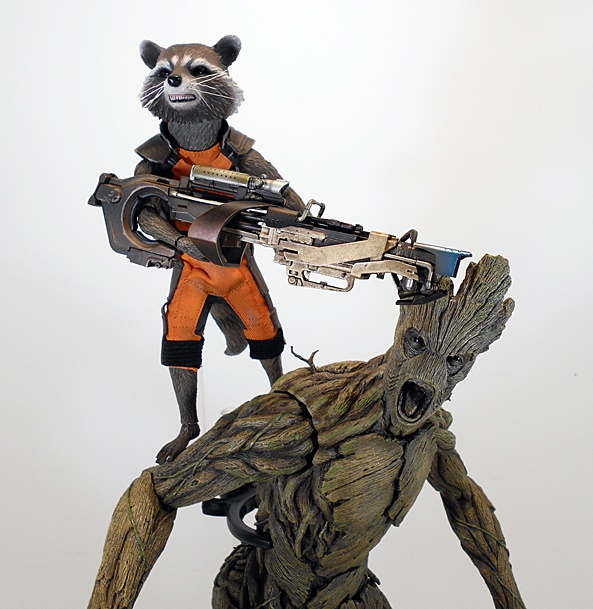 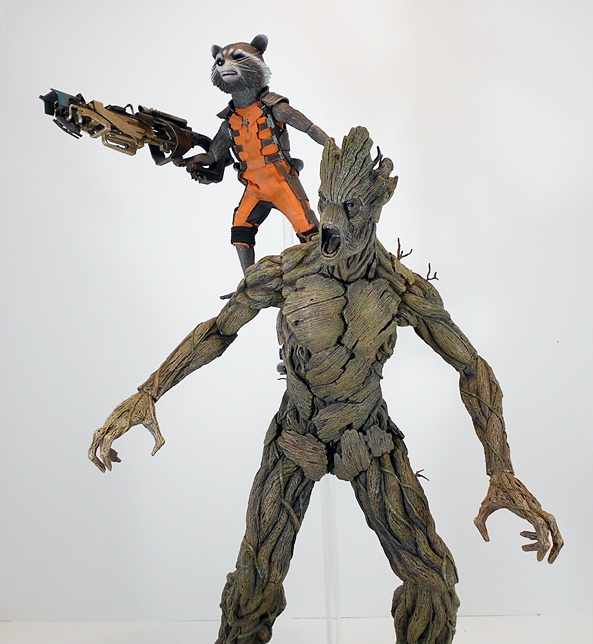 Groot comes with the same style stand as Rocket, which also matches the ones used for Gamora and Star-Lord. In this case the rod and waist clamp makes perfect sense to handle this tall and rather heavy figure. However, you also get a very clever connecting piece, which allows you to attach Rocket’s stand to Groots and pose the little guy riding on Groot’s shoulder. 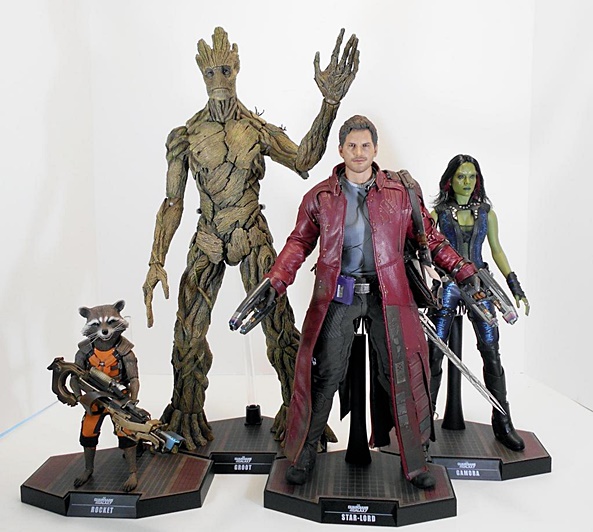 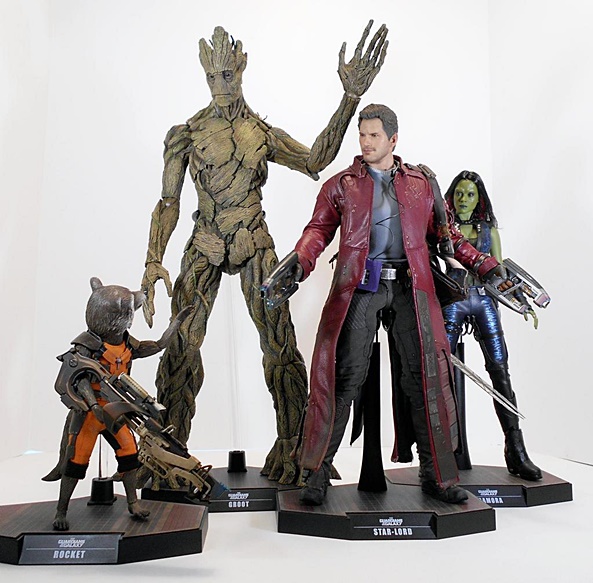 “Quit waving to the camera. Yer making us look like a bunch of idiots!”

If ever I needed a reminder that I collect Hot Toys figures as a form of art, Groot is the figure to do it. The sculpting, attention to detail, and overall craftsmanship on this piece really is awe inspiring. And while the $360 price tag here is no small thing, it’s hard for me to believe that the character could be done better justice in a more expensive statue. Indeed, the fact that Groot turned out so wonderfully allows me to push a little of the cost of this set into his column and away from Rocket. Hey, whatever I have to do to sleep at night, right? Don’t get me wrong, they’re both great figures, and I couldn’t imagine displaying one without the other, but Groot is without a doubt the star here. Hot Toys’ has been killing it with their Guardians lineup ever since Star-Lord first shipped and while I’m still a little disappointed we won’t see a Ronin or Nebula the Guardians themselves have been a welcome treat. And that just leaves the question: Where’s Drax? While the figure remains in licensing limbo, a new prototype was shown as recently as July and is currently pencilled in for a 2016 release. I feel pretty confident he’s coming, but for now nothing has been set in stone. Why would it be set in stone? Shut up, Drax, it was a metaphor.