I’ve mostly been spending my DC Fridays looking at DC Collectibles’ figures, but anything DC is fair game and today I’m looking at the very first Bruce Timm inspired statue from Diamond’s Femme Fatales line. I’ve been a casual fan of the FF line for a little while now and I was thrilled when I heard that DST struck a deal to bring Animated versions of the DC ladies on board with the Timm art style. It seemed like a perfect match and they kicked it off with Supergirl. Rather good timing, too, as the Supergirl TV Series just premiered this week. It was my second time watching it and I enjoyed it quite a lot.

The statue comes in a window box, which has been standard for the line. You get additional windows on the sides and top to let in plenty of light and showcase the statue. The biggest departure here is found in the deco. Rather than using the same black box with red trim, they went for a bright yellow and orange which fits the comic book theme a lot better. The familiar Femme Fatales logo is still in the top right corner and the bottom features the logo for Superman: The Animated Series. The box is totally collector friendly and Supergirl comes fully assembled and ready for display.

The first thing I noticed taking Supergirl out of the box is that she’s fairly larger and heftier than any of my previous Femme Fatales. She only slightly taller than my Anne Bonny statue and keep in mind that Kara is reclining a bit in mid flight and not standing straight. The scale change may annoy avid collectors of this line, but considering it’s a new sub-line and the animated style doesn’t really fit with previous releases, I’m perfectly fine with it so long as it remains uniform with all the upcoming DC ladies.

With size out of the way, I’ve got to say that I’m really impressed with the way this piece came out. The sculpt does a wonderful job capturing the animated look of the character and the proportions are great and the portrait is absolutely adorable. The pose has her hovering in mid flight, which would be absolutely perfect if it didn’t get a little confusing when placed in context with the base, but I’ll get back to that in a bit. 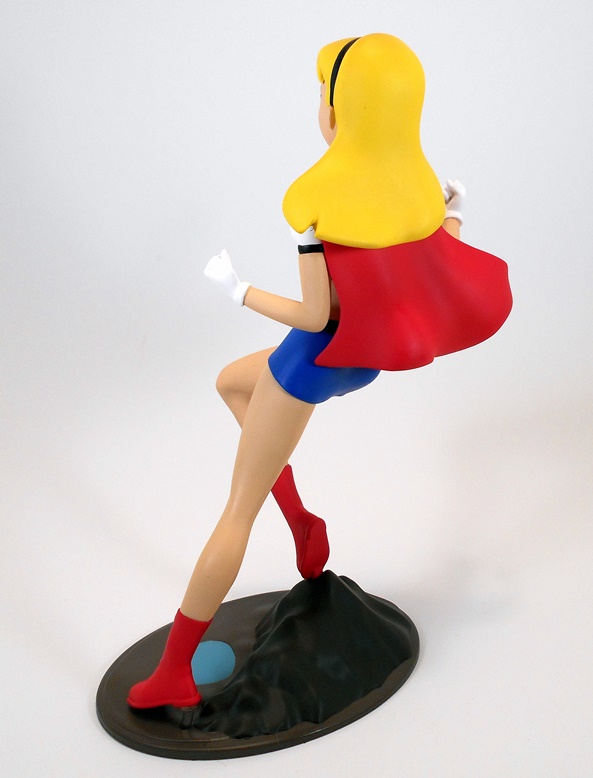 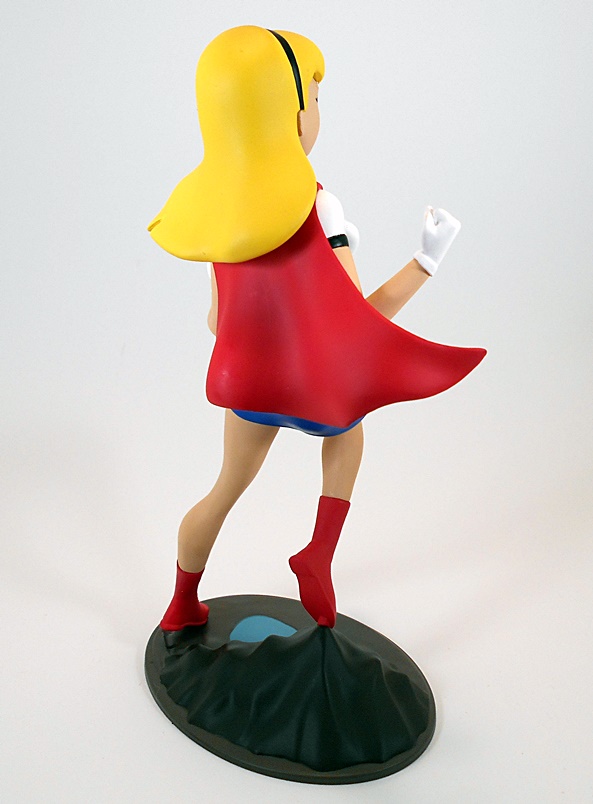 As for the outfit, Kara sports her white cut-off top, blue skirt, red boots, and short cape. The S-Shield on her top is sculpted on as well as painted, which is nice because the animated style of this piece doesn’t call for a lot of intricately sculpted details, and that’s where the paint becomes so critically important.

Happily the quality of paint holds up very well. The statue makes use of bright, vibrant colors to emphasize the look of the animated series. Everything looks very clean, and while I was afraid of visible brush strokes on the white top or yellow hair, there are none to be found. the eyes are straight and the lips and eye brows are tidy. There’s a stray stroke here and there along some of the lines, but overall what’s here is solid work.

If there’s a fly in the ointment here, I’d say it’s the base, which is an odd bit of work. It’s obviously meant to look like the landscape far below, but having the sculpted mountain top and just a blue patch of paint on the otherwise featureless oval base isn’t terribly convincing. She could have also used some height over it, say maybe an inch of clear rod propping her up, because it still kind of looks like she’s standing on it and not hovering far above it. In no way does this ruin what is an otherwise beautiful piece, but I defintely would have preferred just a blank disc for a base. 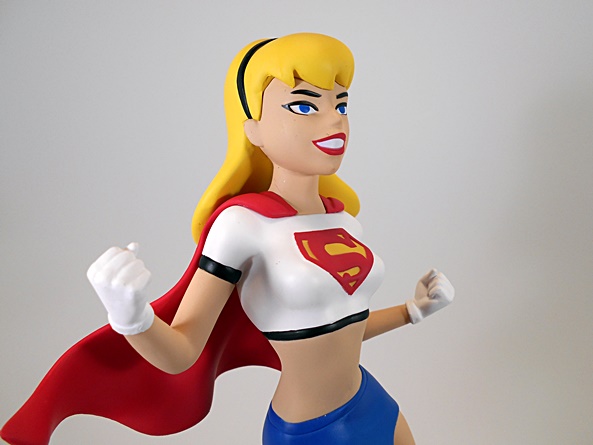 Supergirl falls right in line with the $40 price point on all the Femme Fatale releases. In the past I’ve been able to get some really good deals on these pieces, particuarly the non-licensed ones, but I’ve dropped pre-orders on all the DC Animated releases, so in this case I paid full price. I’m far more interested in supporting this line rather than shopping around for deals. And I’m even more pumped for these statues now that I have this inaugural release in hand. Poison Ivy is the next release in the series, but before I get to her, I’ll be checking out the SDCC version of the Supergirl statue next Friday.