I didn’t think I’d be seeing another Star Wars Black figure until the next full Wave arrives, but thanks to Toys R Us I have a little something to tide me over via their Exclusive Snowtrooper Officer. I was a little pissed off when I first saw this figure revealed and I mistook it as news that the regular First Order Snowtrooper was going to be a TRU Exclusive. Afterall, sometimes those are impossible for me to get hold of. I settled down a lot when I saw it was just the Officer variant and as it turned out I had no difficulty getting it off their website anyway.

The box is right in line with what we saw in the first wave of 6-inch Force Awakens figures. It’s tweaked from the original 6-inch Black line with a larger piece of monochrome character art and a nice red background, which makes the figure pop in the package a little more. Both side panels now tell what the figure is, which was one of my gripes about the older style boxes. The red panel, however, does not designate a number for this figure, presumably because it’s an Exclusive. And speaking of Exclusives, the box does have the silver “R” sticker on the window identifying it as such. 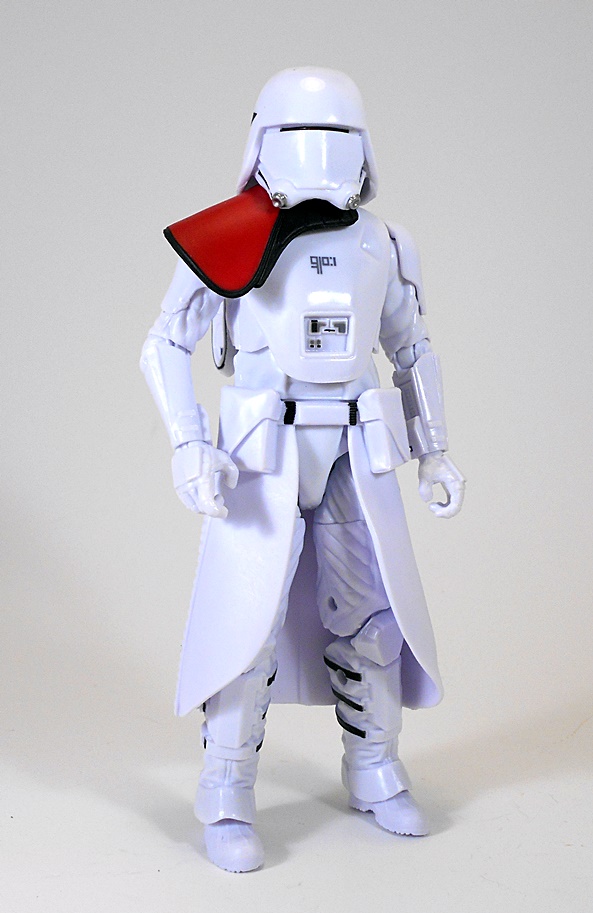 Think you’re safe from the First Order just because it’s chilly where you live? Think again! Much like The Empire, TFO has specially bundled up troops to invade your icy world and oppress you. I’ll confess, I don’t like the design of these guys as much as the classic Imperial version, but I do still like it a lot. The biggest similarity is the kama, but in this case it looks like it’s evolved more into a trench coat and I ain’t hating it. I do, however, wish they had sprung for some soft goods because the plastic kama does impede the leg articulation quite a bit. But more on that later.

I dig the helmet design a lot. It’s nearly featureless design, little gas mask nubs and creepy, almost non-existantly narrow eye slit conspire to create a rather disturbingly blank visage. To me, the more impersonal you can make a soldier the scarier he is and these guys are quite a bit scary.

Since this is an Officer, the figure does include the rank-defining pauldron on the right shoulder and in this case it’s red. Ah, I bet Hasbro is thanking their lucky stars for the original Sandtrooper Pauldron that has since given them the ability to sell variant figures with very little effort. I presume the piece is removable, but my figure’s noggin is on there pretty good and I didn’t want to risk pulling it off and breaking the neck post. The backpack, on the other hand, is easily removed. It comes separate from the figure in the package and simply pegs right into the back. Obviously the bulk of the figure is white, although Hasbro did mix up that white to use a nice glossy coat on the armored parts and a matte for the cloth. It’s subtle, but nonetheless appreciated. A little black paint here and there and the big red pauldron are the only other real coloring to be found. Still, what’s here is pretty tidy. 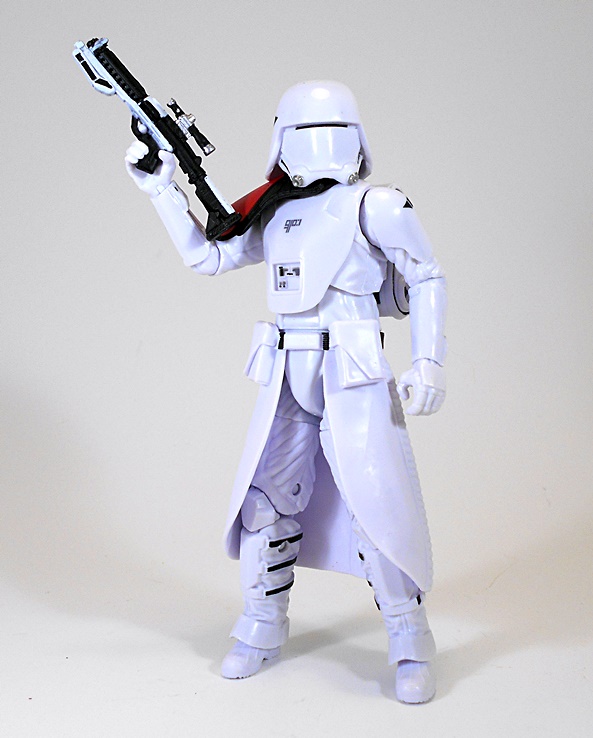 Articulation is serviceable, but there aren’t an over abundance of points. The arms have rotating hinges in the shoulders, elbows, and wrists, but sadly no bicep swivels. The legs are ball jointed at the hips, but that plastic kama restricts them quite a bit. The knees are double hinged, there are swivels in the thighs and the ankles feature rotating hinges and lateral rockers. The torso features a ball joint, which is cleverly masked under the chest armor and the neck also is ball jointed. Even with all that being said, the figure feels rather limited. Not to make excuses, but I imagine that might be fairly accurate for a soldier all bundled up in arctic gear. 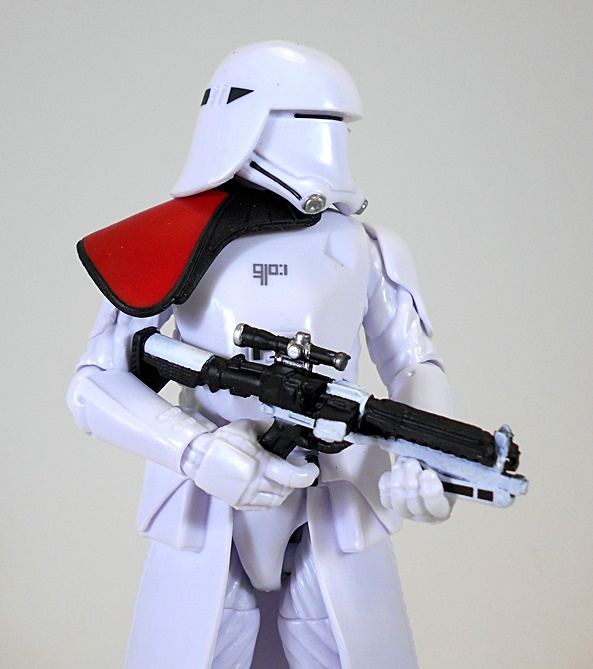 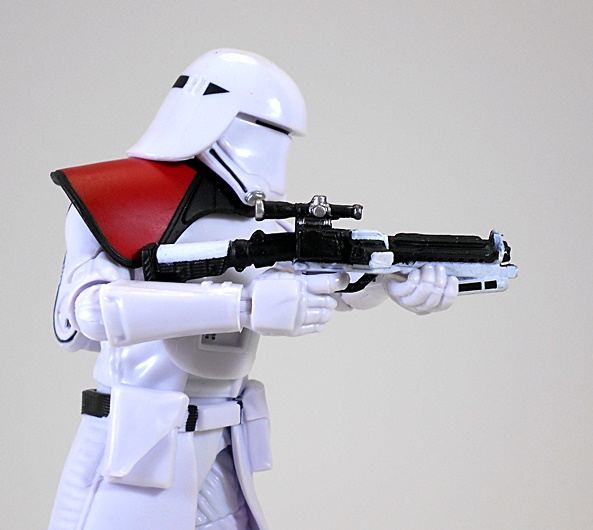 Besides the backpack, the Snowtrooper Officer includes his rifle, which is not only a very nice sculpt, complete with scope and extended stock, but also features some lovely white and silver painted accents. His right hand is sculpted to hold it, complete with trigger finger that fits in the guard.

This guy really doesn’t hold many surprises, but I do like him a lot. A little cloth would have gone a long way to improve the range of leg movement and reinforce that this is a premium line for collectors, but there I go again setting my expectations for 6-inch Black a little too high. Still, I don’t want to go out bitching about what is a rather nice figure. I’m very glad to have been able to find him and I’ll look forward to scooping up a pair of the regular Snowtroopers when they make their appearance.