It’s Marvel Monday again and time to tear into another figure in the Hulkbuster Wave. It’s exciting stuff, because it brings me one step closer to building this sweet Hulkbuster BAF! What’s not quite so exciting is that today’s figure is Blizzard. Oh…

Packaging! Yes, the figure comes in packaging and it’s right in line with what we’ve been seeing for a while now. Blizzard comes crammed all the way to one side to make enough room for the giant front and back shoulder pieces of the Hulkbuster armor. Hasbro probably could have left the figure out completely, and this package would still have sold. Ah, but let’s give Blizzard his due and check him out.

Yeah… Donnie Gill. I’ve got almost nothing. I think he’s the second person to carry the Blizzard identity. Was he an Iron Man villain? I vaguely remember that. Mostly, I know him as a one time member of The Thunderbolts. As you can tell, he isn’t high on my list of Marvel characters and that’s saying something, because I have an irrational love for a number of pretty obscure Marvel characters. Anyway, this is another one of those figures that just requires a basic buck, some metallic paint, and a new noggin and… voila… you’ve got Tiger Shark… I mean, Blizzard. I can’t place the buck, but there’s a hole on the back accentuating the hollow torso, so I’m assuming this body wore a cape at some point. 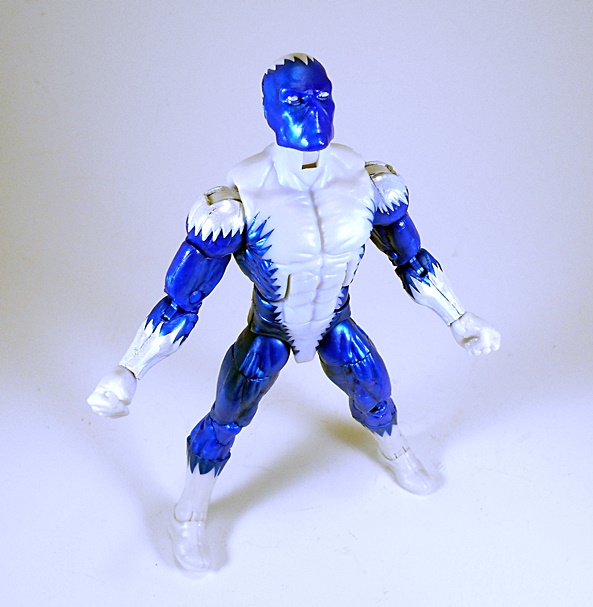 Blizzard’s buck is a combination of white plastic painted metallic blue and vice-versa. There was certainly potential here, as if done properly the metallic blue and white could have been rather striking. Alas, there are a lot of eye sores on this guy when it comes to paint quality. The arms are the biggest offenders where the blue plastic bleeds through the white paint on the forearms and shoulders. The seams on the forearms look especially bad. There’s also some chipping or transfer on the legs. It’s a shame. 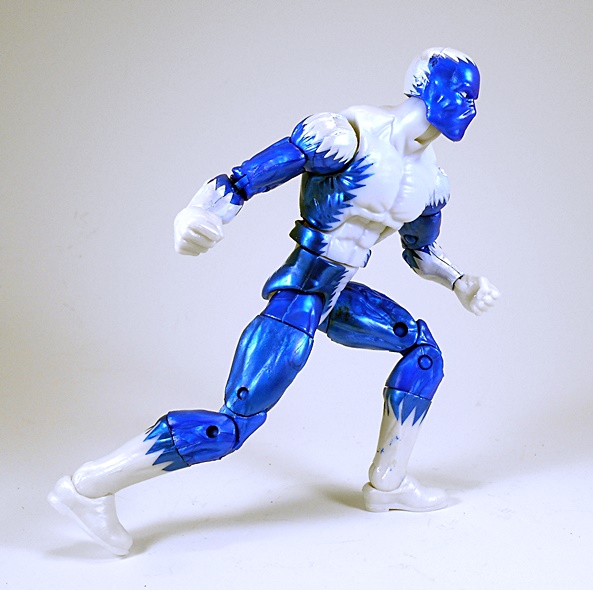 The articulation here is very solid, even if the paint isn’t. The arms have rotating hinges in the shoulders and wrists, double hinges in the elbows, and swivels in the biceps. The legs are ball jointed at the hips, double hinged at the knees, and swivels in the thighs and lower legs. The ankles are hinged and have lateral rockers. The torso features a swivel at the waist, an ab crunch hinge and both a hinge and ball joint in the neck. The joints feel great and he is tons of fun to pose. 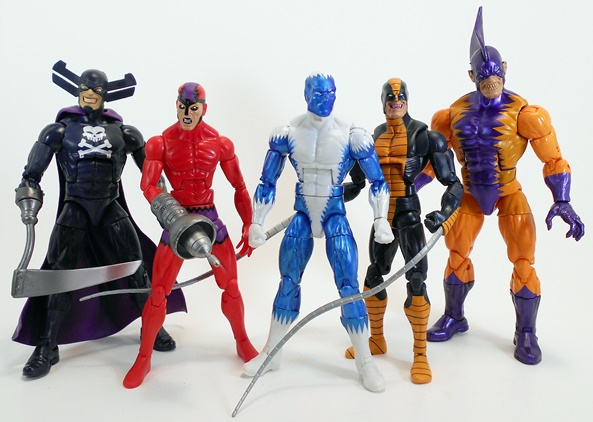 And that’s all I’ve got on this guy. I’ve said it before, my Marvel collection is all about universe building, so it doesn’t bother me when I get a back bencher like Blizzard, so long as the figure is decent. Blizzard, unfortunately, falls just a little below the mark. If there were no BAF parts at stake, I wouldn’t have gone out of my way to buy him, but I sure as hell don’t mind adding him to my shelf as decidedly average as he is. Now if you’ll excuse me… I’ve got a strange urge to run down to Dairy Queen.