Once again, my DC Friday feature is spilling over into the weekend. This time, I had to dig out my Toy Closet from the backlog of receivings just to get to anything and there’s still a big pile of toy boxes impeding my entry. Anyway, better late then never and today I’m opening another DC Collectibles figure… Stargirl! I thought Stargirl was an odd choice for this line, as she hasn’t exactly lit up the “New 52” or at least not the books that I’ve been reading. Appearances in Justice League Dark and Trinity War kept her on the radar, but for me she just isn’t quite the same unless being shadowed by her robot buddy, STRIPE. Of course, none of this stopped me from picking up the figure, mainly because I have fond memories of her from the old DC continuity and she was really, really cheap. 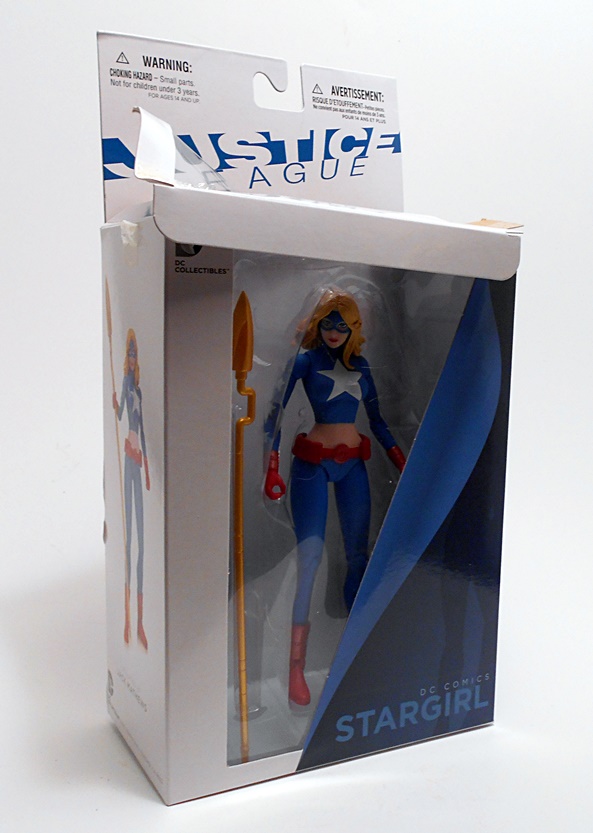 Oh, bugger! I forgot to take the in-package shot before I tore it open like an animal. I threw one in anyway. You get the idea. Courtney comes in the fairly standard white window box with a blue swipe across the front. The side panels denote the figure inside for easy access if you save the boxes and store them lined up on a shelf. The back panel shows off the other three figures in this assortment. I’ve already looked at Zatanna and Constantine. I’ll get to Hawkman sooner or later.

Stargirl’s costume didn’t undergo a major change for The New 52. She still has the cut-off, mid-riff revealing blue top with a large star on her chest and smaller ones lining her sleeves. Blue mask? Check! Red gloves? Check! The biggest departure is that they gave her a full set of pants, in this case the same shade of blue as her top, and red boots. She also has a red utility belt with pouches. This was a pretty simple outfit to sculpt, but I think DCC did a beautiful job on her, mainly because of the gorgeous blue and red paint, sculpted seams, and crisp lines around the stars. 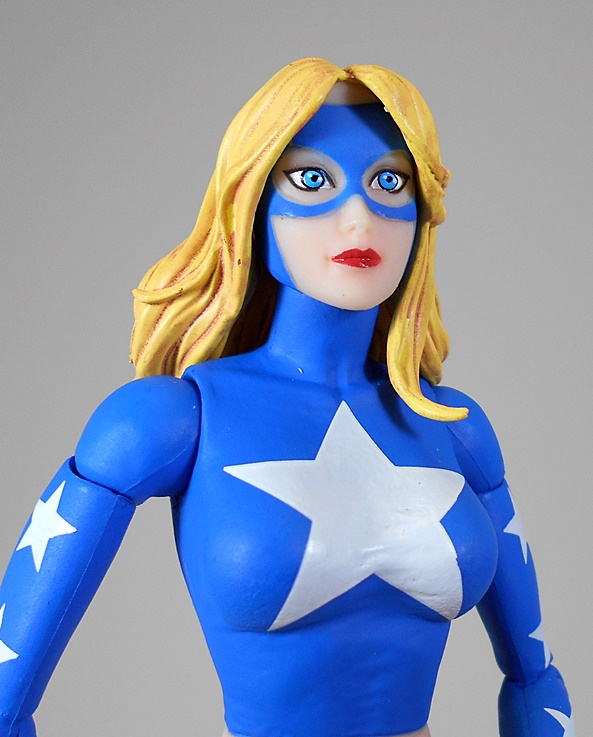 The portrait is pretty good too, especially considering the last Stargirl figure I bought was the one from DCUC, Wave 19 and gave Courtney a freaky Stepford Wives kind of smile. Here she’s wearing a fairly neutral expression and the paint on her eyes and lips is solid. Indeed, the only place the paint on this figure stumbles a bit is with some yellow transfer from her blonde hair onto her right shoulder. Thankfully, it’s not even noticeable if you keep her head facing front. 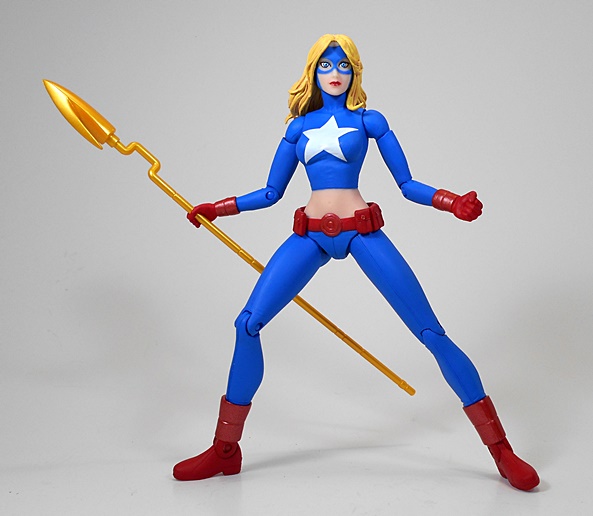 Articulation here is better than average for a DCC release. The arms have rotating hinges in the shoulders, swivels in both the biceps and wrists, and hinges in the elbows. The legs are ball jointed at the hips, have swivels at the tops of the boots, and hinges in the knees. The neck is ball jointed, but because of the long sculpted hair, there isn’t a lot of room for movement. Alas, there’s no articulation in the torso, but even still, she made out pretty well compared to some other DCC releases.

Courtney comes with her Cosmic Staff, which is sculpted in gold plastic and looks great in her hand. I do wish both of hands were able to grip it, but her left hand is sculpted into a fist.

I always enjoy it when a company takes a lower tier character and knocks that figure out of the park. That’s exactly what it feels like DC Collectibles did with Stargirl here. Yes, there are other characters who probably deserved this slot more, but I’m not going to argue when the figure turns out this good. Nice sculpt, gorgeous paint, and better than average articulation for the line. Toss in the fact that she only set me back ten bucks, and I’ve got nothing to complain about! And she looks damn good with my DCUC STRIPE figure too!

One comment on “Justice League: “New 52” Stargirl by DC Collectibles”