Yesterday I began a rage-fueled assault on Funko’s unfortunate foray into the Fallout series with their Legacy Collection Lone Wanderer. Today I’m checking out the rest of this initial assortment (yes, mercifully, it’s only two figures) with their Power Armor. I’m still kind of spent from yesterday, but I just took a hit of Jet and I think I’m cool to muddle through another day of this torture. Hopefully today will be a little better. I mean, it has to be… doesn’t it? 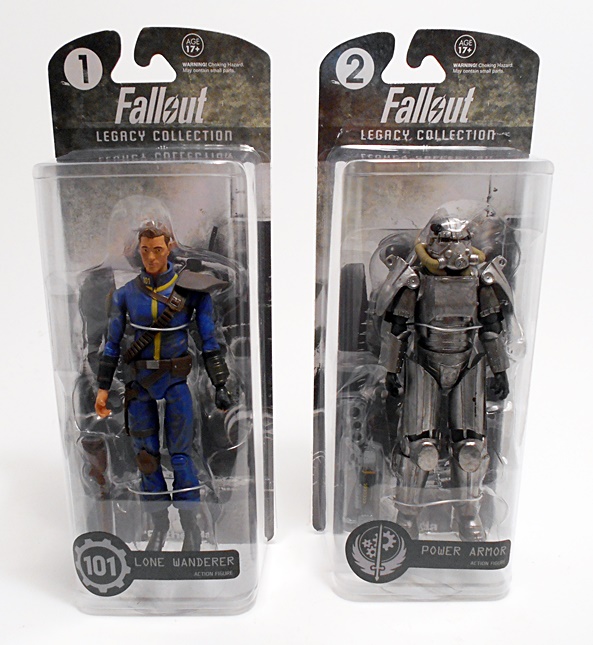 Here’s the same in-package shot that I showed yesterday when I thought I would be able to fit both figures into the same Feature. In a nutshell, it loses all the class and collector-friendly perks of the old Legacy Collection window boxes, but at least you get a better look at the figure. Inexplicably, Funko is not ashamed to show you what’s inside, so unless you buy them online like me, you’ve got nobody to blame but yourself. Happily, this is one of those good news, bad news scenarios. The good news is, this figure isn’t nearly as bad as the Lone Wanderer. The bad news is, it’s still not very good.

As with the Lone Wanderer, The Power Armor has many different appearances in the Fallout universe, so this one is kind of a generic design, and I’m fine with that. I’ll also note that while there is no way in hell I would have bought the Lone Wanderer had I seen him in person, I probably would have gone for this guy, because he doesn’t look nearly as bad, at least not in the package. A lot of that is probably due to the bulkier and more forgiving design. Straightaway, let me say that the biggest problem I have with this figure is that the upper legs look out of proportion with the torso. I don’t think it’s so much a problem with the legs as the torso should have been bulkier. Or maybe it’s because the exposed ball joints in the hips make the upper legs look weird. I can’t put my finger on it, but something just looks off. It’s not eggregiously so, but I can’t unsee it. Then again, it could just be me.

With that being said, I think this is a competent, albeit not spectacular sculpt. The Power Armor has a somewhat primitive design that jibes with what we got here. The silver painted finish looks rough in some areas, but again that works for what it is, at least in place of any real attempts at weathering. The armor is all smooth, so there’s no sophisticated pitting or anything like that. Ironically the most detail on it is probably found on the copyright information stamped on the backs of his legs. You do get some sculpted rivets in the arm, but not a lot else. The backpack is passable, but again feels soft and devoid of any meaninful detail. There are also more of the bare plastic unpainted hoses that make this look rather like a prototype.

The helmet has a fair amount of detail, but everything looks very soft and the bare plastic used for the hoses again looks rather unfinished. They didn’t even bother to paint the spotlight, which is rather inexcusable since apart from all the silver and the black visor, there are absolutely no paint operations on this figure at all. Unless you count the dribble of black on the front of his left leg. I suppose the bare plastic that’s exposed at the joints gives it a little depth. 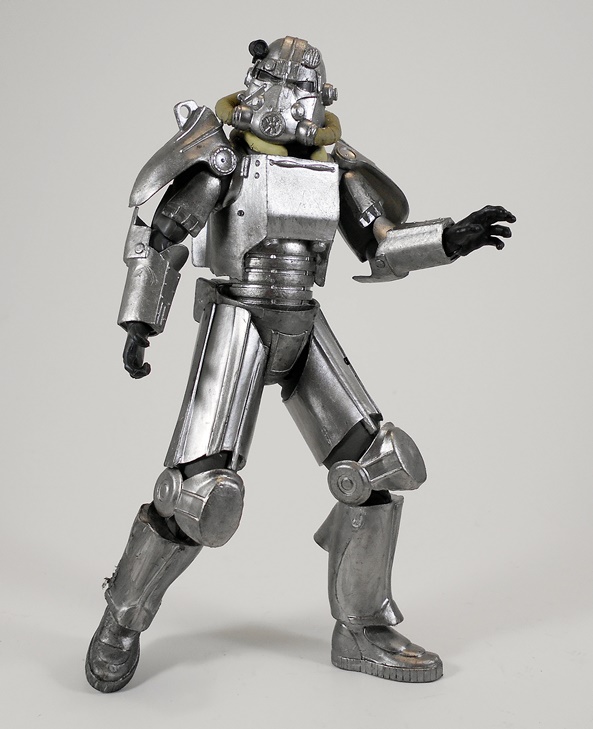 The articulation here is virtually identical to what we saw with the Lone Wanderer. It’s not as a big an issue for me here, since this is a dude in bulky armor. You get rotating hinges in the shoulders, elbows, and wrists. The pauldrons look like they should be hinged, but I don’t think they are. Either way, the ones on mine don’t move. If this were a Marvel Legends figure, they would be hinged to allow for better shoulder movement. No such luck here. The legs feature the same restrictive ball joints in the hips, double hinged knees and rotating hinges in the ankles. There is what appears to be a ball joint in the waist, but my figure will only twist ever so slightly to the left or right. The neck is also ball jointed, but it’s so tight that I’m afraid to really move it in fear of twisting it off. In fact, there’s very little range of motions on any of the joints on this figure, so he’s not a lot of fun to play with. 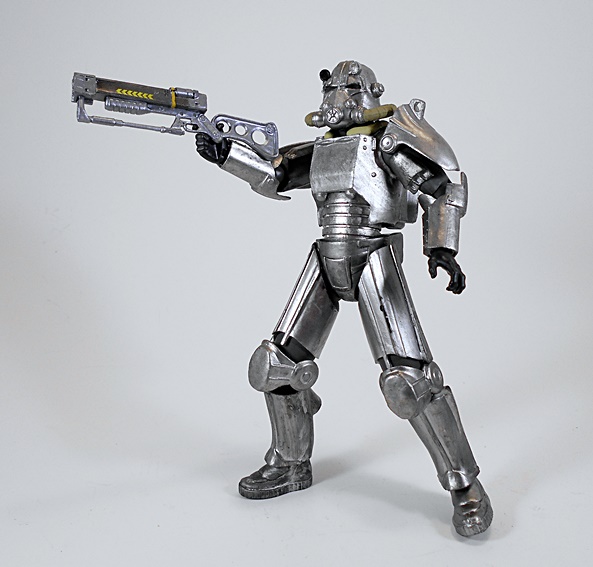 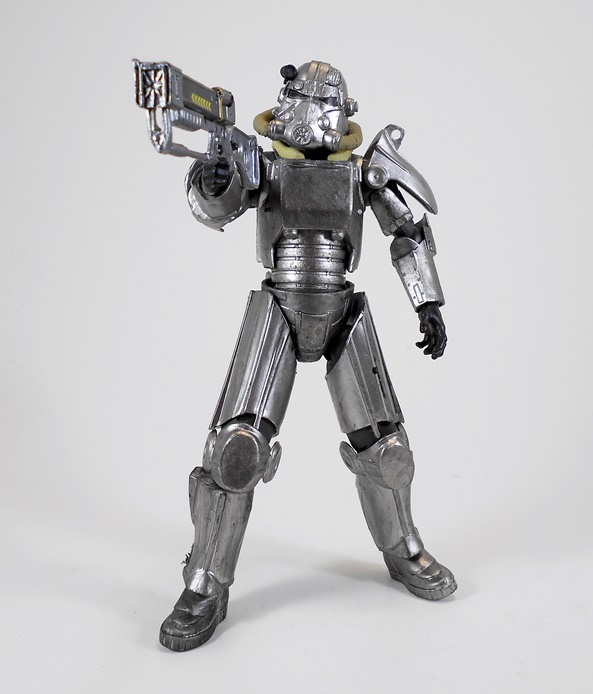 Once again, we get only one accessory. In this case it’s a laser rifle, which is at least more interesting than 101’s hunting rifle. It’s a decent sculpt of the rather iconic looking weapon from the game and it features some decent paint apps as well. It is, unfortunately very difficult to get the figure to hold it, but still better than what we saw last time. 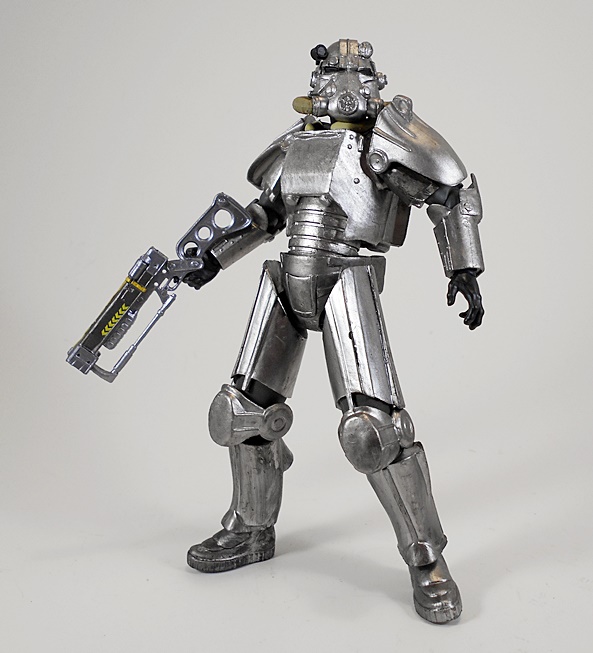 If you were looking forward to another hate fest, I’m sorry, but I don’t think it was warranted here. No, this Power Armor is not a very good figure, but it doesn’t elicit the absolute contempt that I felt for the Lone Wanderer. It just feels very phoned in. It looks passable standing on the shelf, and I can’t say I’m entirely sorry I bought it, but I am still very sorry that Funko got the license to do these figures. NECA would have been my first choice, but having bought several of Mezco’s Mortal Kombat X figures, I think they would have done a much better job with the Fallout license too. If this is the future of The Legacy Collection in Gentle Giant’s absence, I think Funko should just stick to their Pop! Vinyl empire. What a disappointment this has been. Thankfully, I was able to cancel my pre-orders for their Skyrim figures in time.