Boy, I sure am digging NECA’s Ultimate Series! But, if you’ve been reading FFZ for the last year or so, you already knew that. While the half-dozen or so figures in this line have hit on several different and classic points of action and horror cinema, this newest offerings are going back to T2: Judgement Day, the greatest sci-fi action flick ever produced (IMNSHO) with the most quintessential bad-ass mom of them all, Sarah Connor!

Sarah joins the first T2 figure in the line, the T-800, with beautifully matched packaging. It’s the same chunky box with a front flap and I dig the way it like an oversized VHS tape sleeve. The flap opens up to allow a look at the figure and all her accessories and there’s a little blurb about the character on the back. Everything is collector friendly, and that’s great because there’s a lot of stuff here to store in it. 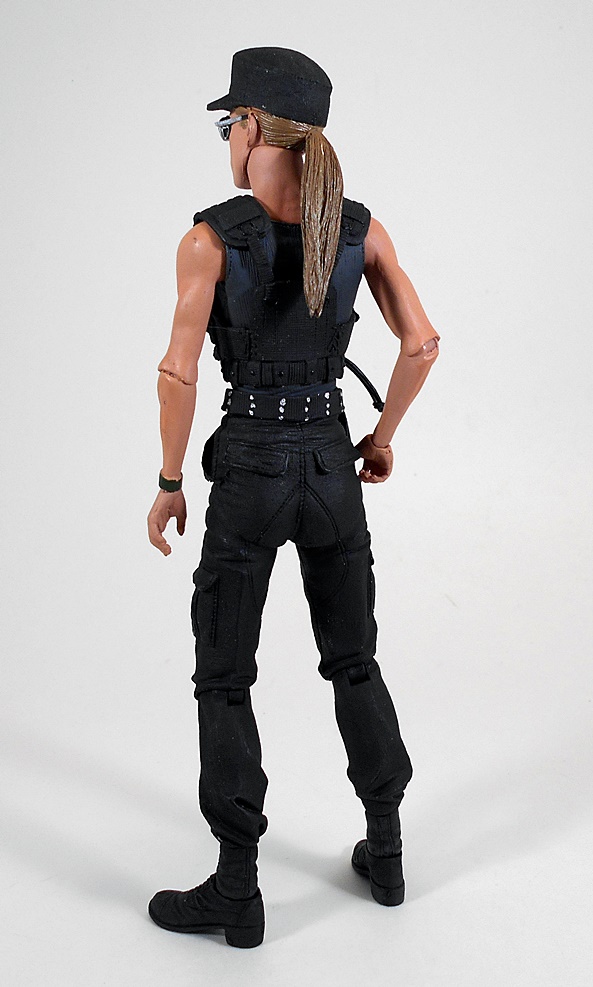 Sarah is sculpted wearing the tactical gear she donned after hooking up with her merc friends and getting ready to go after Dyson. The outfit features high laced combat boots, pocketed pants, a sleeveless t-shirt, and a tactical rig. Everything here is reproduced with NECA’s usual uncanny attention to detail, which includes stitching on the pants, textures on the shirt, individual pouches and straps on the rig, individually painted fixtures on the belt, and a combat knife sheath with removable knife.

Not to be outdone by the T-800 figure, Sarah also comes with three different portraits. The figure is packaged with the ponytail, military cap, and sunglasses. This one is a great look for the character and a nice likeness even with the glasses on. The glasses appear to be a separate sculpt and are permanently attached. My only point of contention here is that I wish the paint used for the silver rims of the glasses was a little sharper. There’s a lot of slop when you get up close with the lens, but it’s clearly not as bad with the naked eye. Want to take the hat and glasses off? Just pop on the next head… 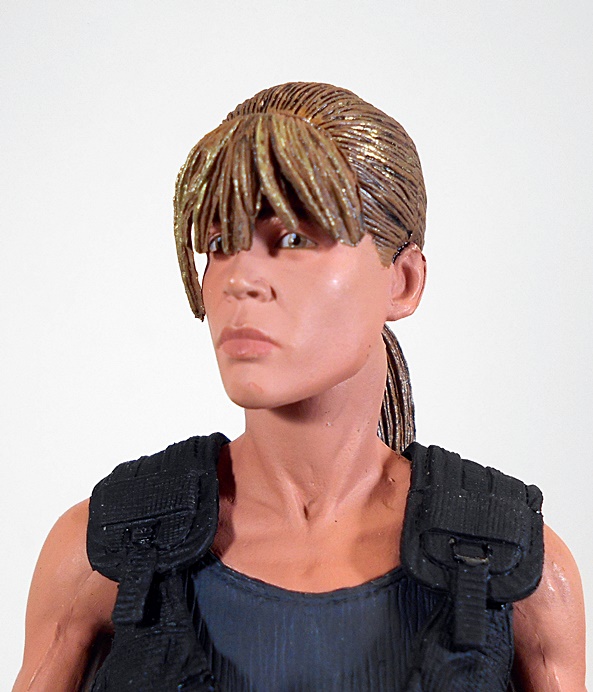 This one is the same ponytail, sans hat and glasses, with her bangs down in her eyes. Another great likeness, and I really dig the way they sculpted the bangs as a separate piece. You can actually pull them back and see her eyes under there. Neat! 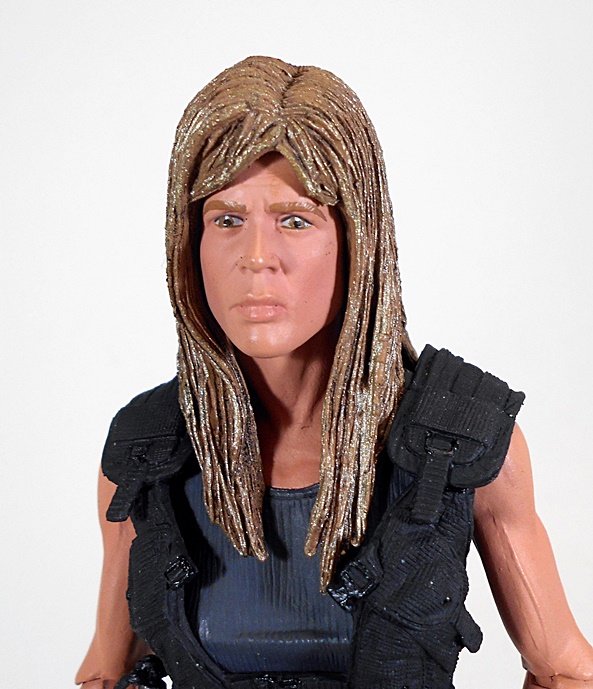 Finally, you get a portrait with her hair down and another pretty solid likeness. I think they got a little heavy handed with the eyebrow paint, but I’ve got no other complaints. And even with all that hair, NECA was still able to salvage the neck articulation thanks to the use of soft plastic and the cuts on each side where the hair falls in front of and behind her shoulders. 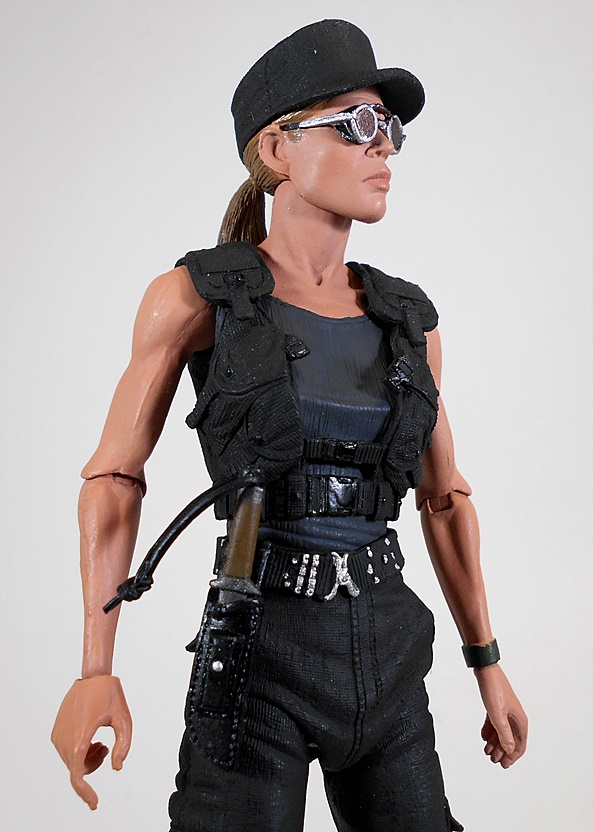 Speaking of articulation, the articulation here is pretty solid. You get rotating hinges at the shoulders, elbows, hips, and knees. There are ball joints in the waist and neck. The wrists have swivels and the ankles have both hinges and lateral rockers. Some extra points could have been justified, but I suspect some, like bicep cuts, were left out so as not to compromise the sculpt. If I could have one improvement here it would have been a better range of motion in the elbows. The sculpt stops them about halfway, which makes it more difficult than it should be to achieve certain poses with her guns. 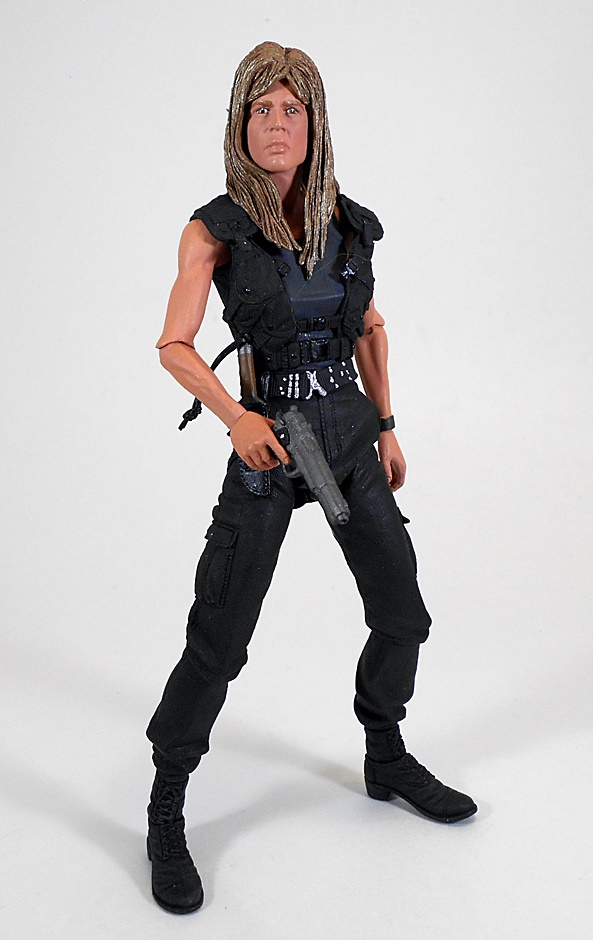 Naturally, Sarah comes with a nice selection of weaponry, in addition to the combat knife included in the sheath, she has three guns. Starting off with the pistol, she has the Colt-Detonics M1911 Hybrid, which the T-800 acquired at the bikier bar and Sarah picked up in the escape from the mental hospital. There’s some beautiful detailing on this, particularly in the distinctive grip.

Next up, you get the Remington 870 police shotgun. This is a great looking accessory, which includes a hinged stock with the extra cartridges sculpted on top. 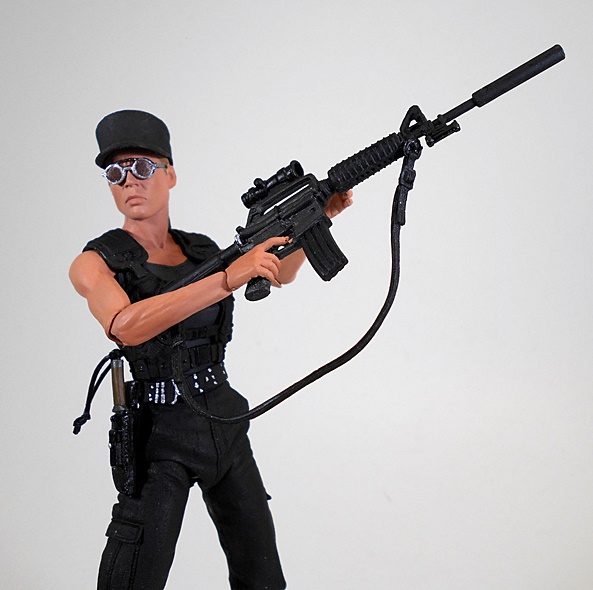 And finally, you get a really great recreation of the Colt Commando. This one includes the laser site she used to target Dyson outside his home. Owning this figure and the T-800 results in a damn fine collection of iconic weapons in the 7-inch scale.

Once again the term “Ultimate” is aptly used to describe this line. Sarah is a fantastic figure and with a bevy of weapons and extra likeness options, you get a lot more here then one is inclined to expect from a mass market figure in this scale and all for the ridiculously reasonable price of $21. Needless to say I’m continuing to be on board with every figure NECA puts out in this line, and the next one will keep the T2 love alive with the Ultimate T-1000.