NECA has been buttering their bread with the Aliens and Predator license for a while now and doing a bang up job at it. And, yes, it’s taken me longer than I thought it would for me to finally buy in to NECA’s Alien line, but they’ve finally beaten me down and I could resist no longer. The Kenner-inspired Alien Vs Predator 2-pack was the ultimate gateway drug, but it’s the figures from the original film that I’ve been jonesing after the hardest. I’m most certainly in the minority when I say that the sequel Aliens hasn’t aged well for me, but the original film still has a place near and dear to my heart. It’s a near perfect blending of sci-fi and horror and there’s always been a copy of it on my media shelf, whether it be VHS, DVD and ultimately Blu-Ray. While I will no doubt pick up some of the other figures in this line (I’m definitely looking forward to getting the Alien: Isolation and Alien 3 figures) it’s the ones based on the first film that I’ll be focusing on first. And what better place to start than with Lt. Ripley and Big Chap himself. 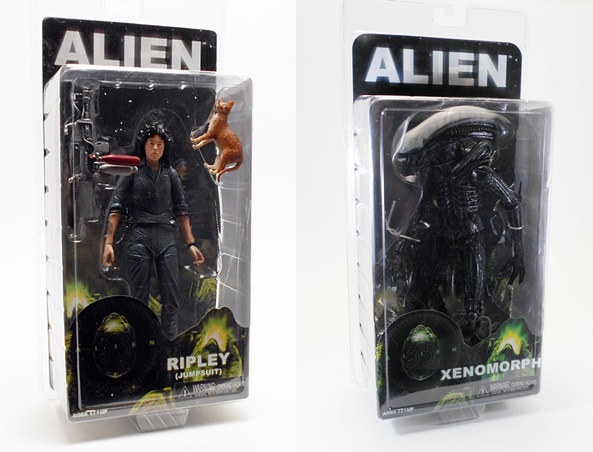 The figures come in sealed clam shells that show off the goods splendidly but are about as non-collector-friendly as you can get. I suppose some deft work with a razor could get the figure out through the back and in again, but I tend to see this kind of package as a gift from on high. I don’t have to feel bad about discarding it. Plus… there’s nothing quite like the head rush I get from those glorious NECA plastic fumes! So, I’m gonna douse these babies with some Xenomorph blood to get them open and get at the figures inside. Let’s start with Ripley… 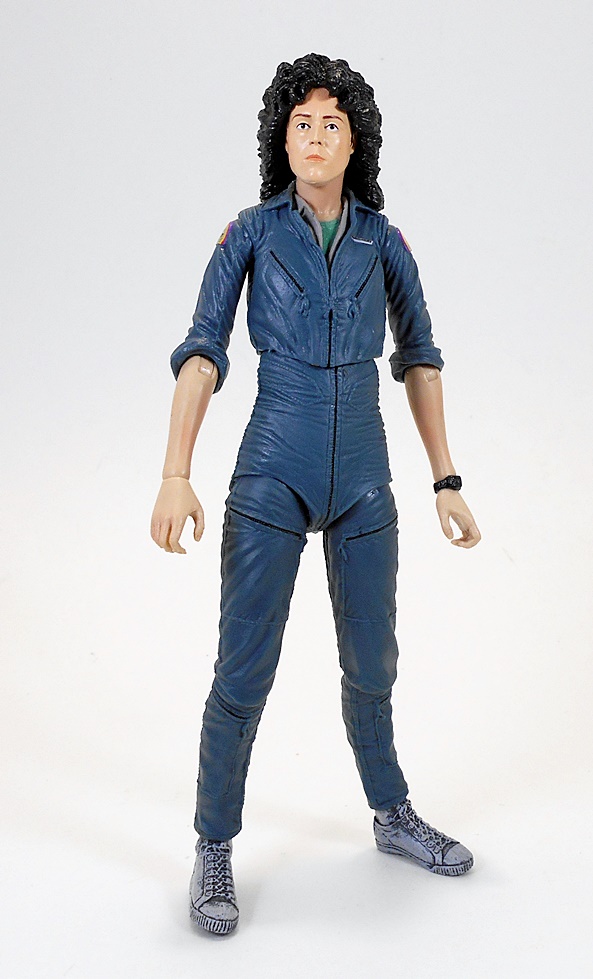 Without a doubt one of the great female protagonists of the genre, Lt. Ellen Ripley dons her blue Nostromo jumpsuit. This may not be the flashiest figure on the market, but it’s a damn iconic one to me. The jumpsuit is sculpted with all the little folds and pockets, and you can see the various layers of clothing peeking up from inside her collar. She’s got her personal computer-watch sculpted on her left hand and a highly detailed pair of space kicks, complete with sculpted laces. The shoulder patches with the ship insignia also look particularly good. 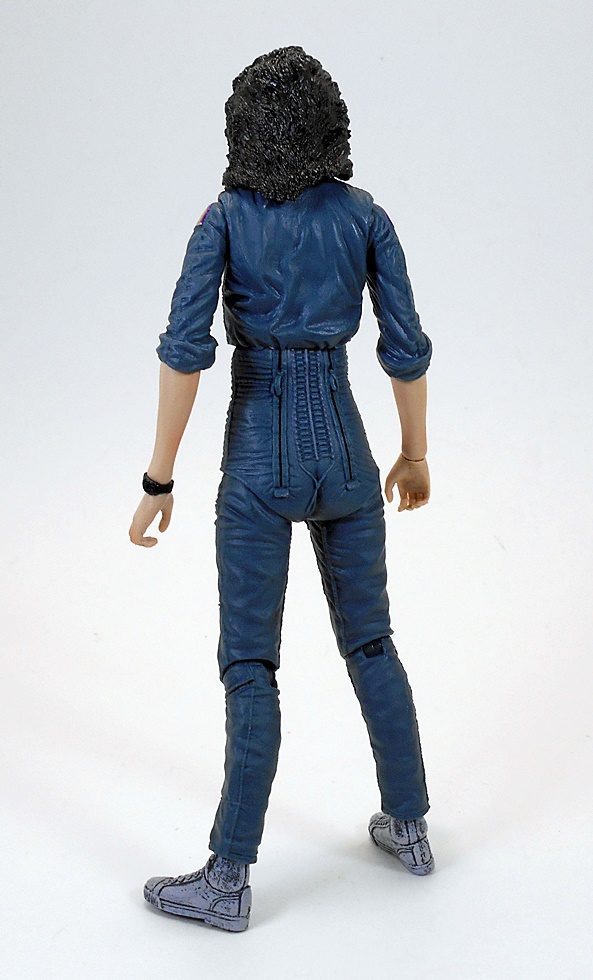 The back of the jumpsuit features a rather elaborate set of stitching that cinches around her waist and looks almost like a corset. The set and costume designs in Alien are so damn good they could even make something like a jumpsuit seem interesting. And leave it to NECA to pick up on all those little details and bring them out in the sculpt. The sleeves are sculpted to be rolled up just above her elbows, which is convenient for her articulation. In total, I count about 12 points of articulation. There are rotating hinges at the shoulders, elbows, and wrists. The legs are ball jointed at the hips and have rotating hinges in the knees and ankles. I think there are lateral rockers in the ankles, but mine appear to be fused. Ripley may be taking a dip in some boiling water at some point. There’s a ball joint in the torso and another in the neck. 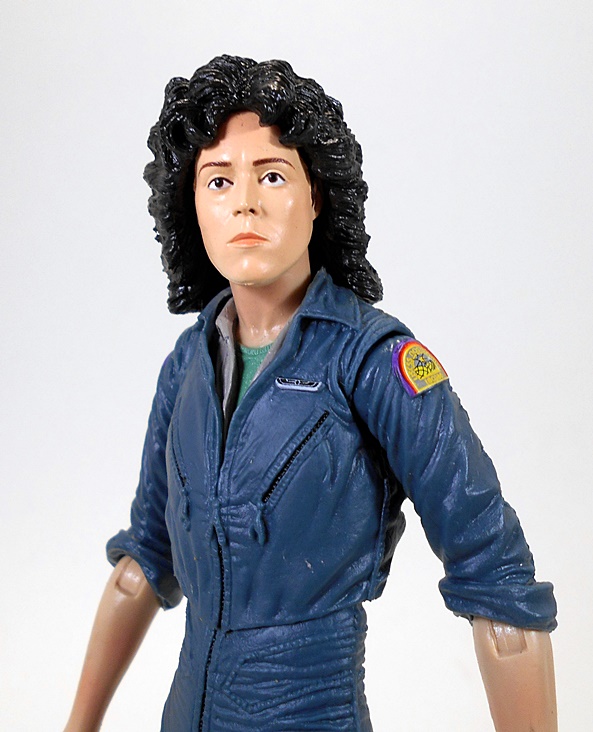 The portrait here is certainly solid, and that’s saying something because Sigourney Weaver doesn’t seem to be the easiest likeness to sculpt. Just ask Mattel (and now Diamond Select) about how they’re Dana figures from Ghostbusters turned out. The paintwork on her face is solid and I’m happy to note that the copious amount of hair doesn’t impede the neck articulation too badly. From what I understand, Weaver doesn’t play fast and loose with licensing out her likeness, so it’s nice to see it landed in good hands here. 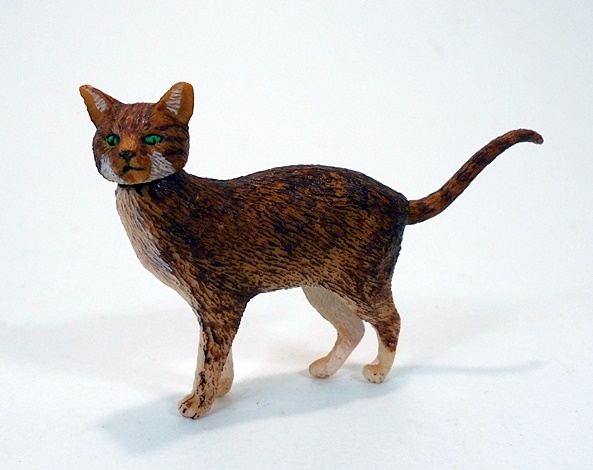 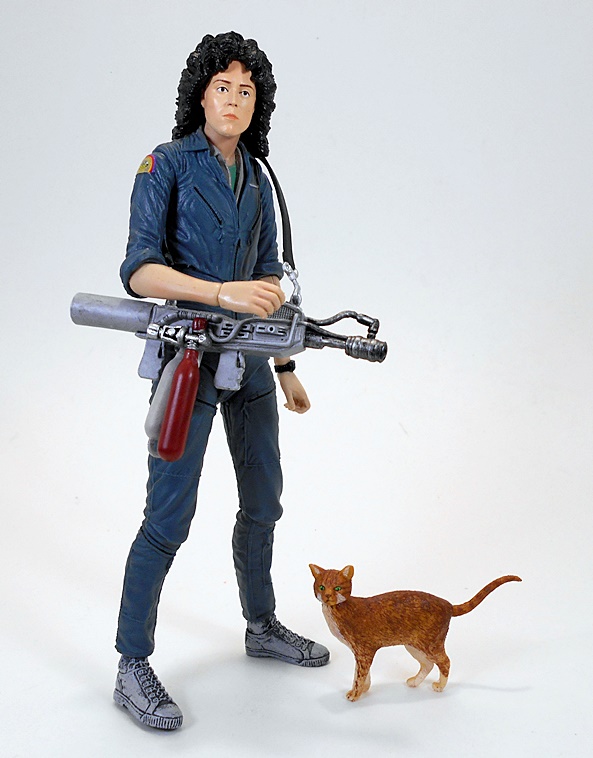 Accessories? Well, you get Jonesy the cat. How cool is that? He’s a fairly simple little piece with articulation in the neck and base of the tail. The wash on him makes it look like he’s been crawling through the Nostromo’s ventilation system watching the humans getting picked off one by one. Kitty needs a bath. 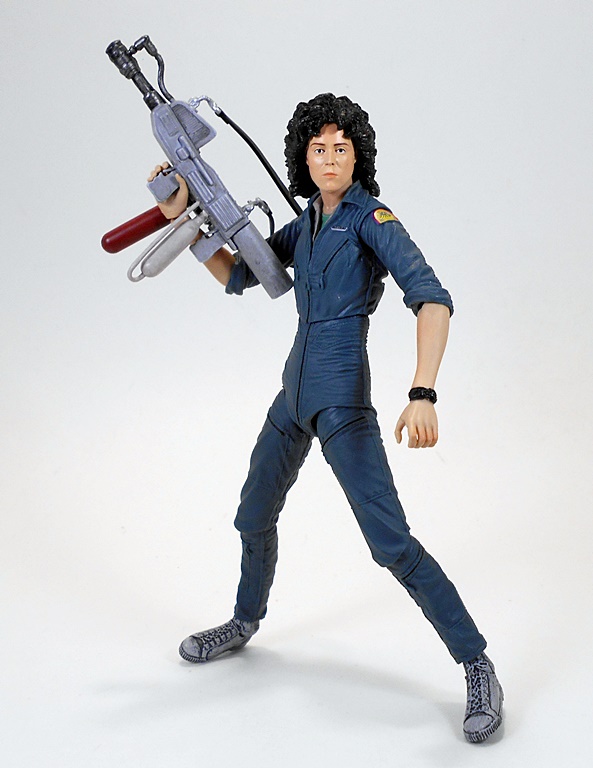 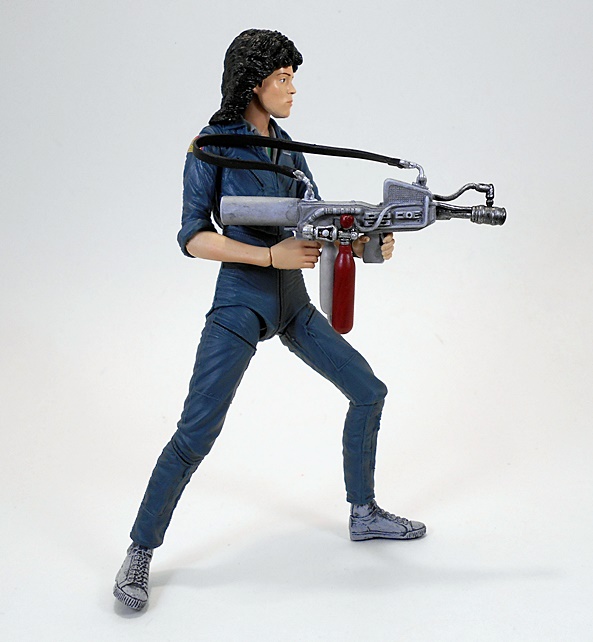 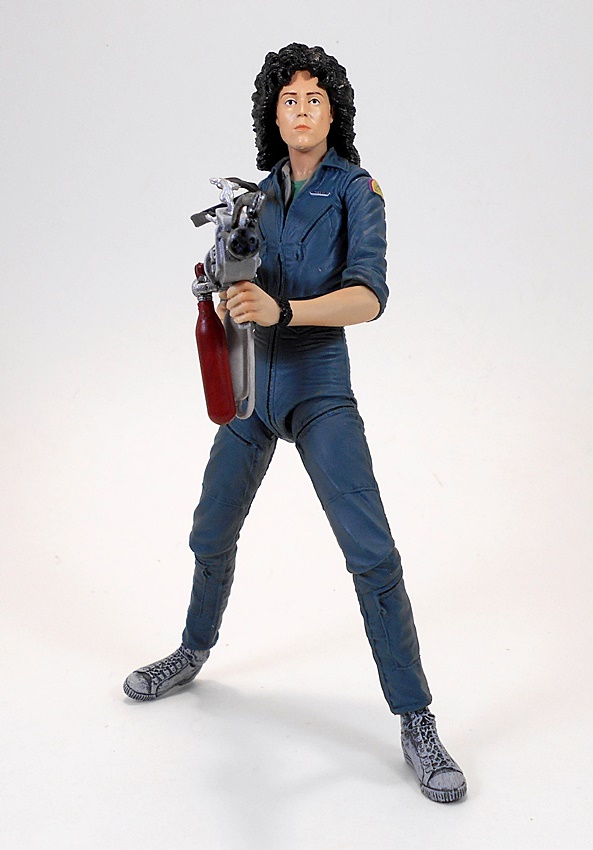 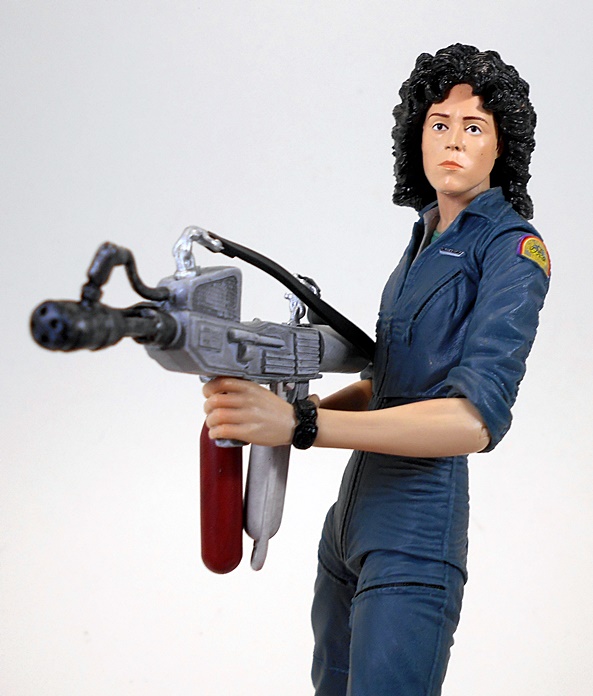 You also get the flamethrower that was used by the crew to try to flush the Xenomorph out of the vents to where they could blow it into space. How’d that plan work out for ya, guys? It’s a good sized accessory and looks great. The figure can hold it with one or both hands and it features a shoulder strap for carrying. Now, if only she had something to toast with that thing… 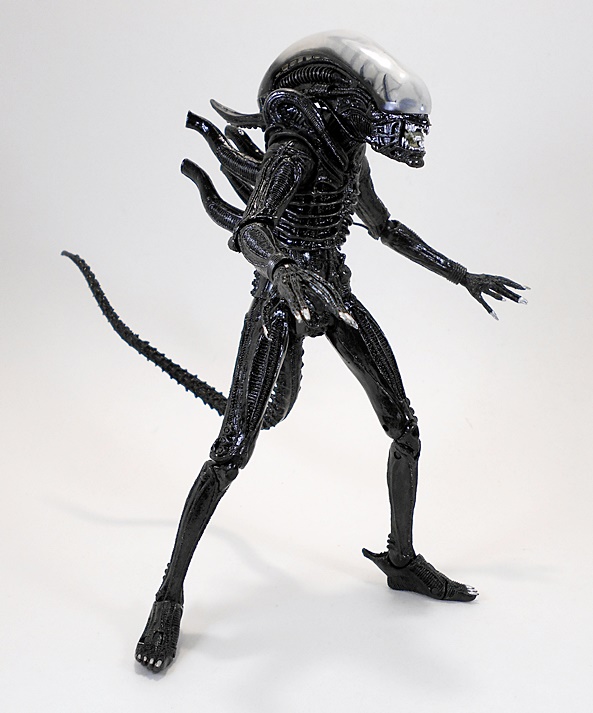 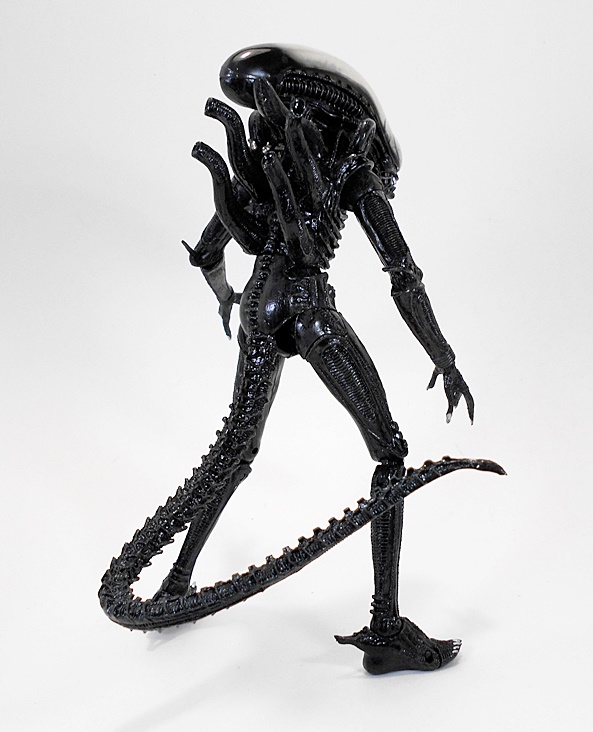 Oh yeah, we’ve got the Xenomorph! I can’t think of too many creature designs more iconic or terrifying than the Big Chap here and NECA did a phenomenal job bringing it to the 7-inch scale. This is basically the same mold as the one from the Alien Vs. Predator 2-pack and yet I find myself falling in love with it all over again. Giger’s design had to be a challenge to recreate and the folks at NECA spared no expense in the detail here. From the serrated edges of the segmented tail to the exo-skeleton ribcage, everything here is just beautifully done. The glossy finish gives him a nice, icky wet look and the silver paint on the finger and toe nails is a great little touch. 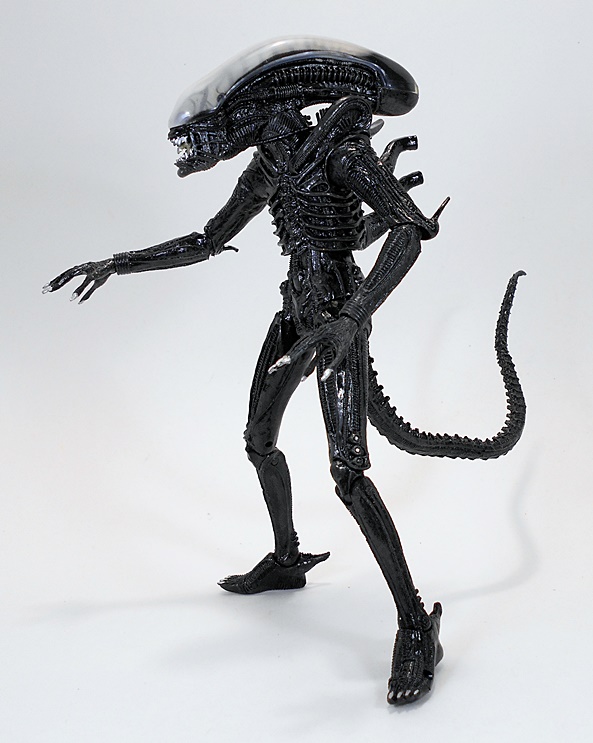 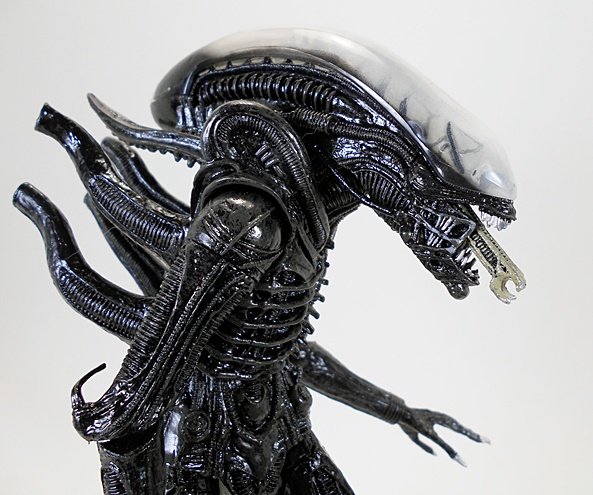 The big difference that separates the sculpt here from their other Aliens is the translucent dome, through which you can see his skull and it makes for an extra chilling effect. The jaw is still hinged and the secondary mouth can be extended. The articulation remains the same as the other releases and he still has that same great bendy tail, complete with wire so it stays where you decide to put it. 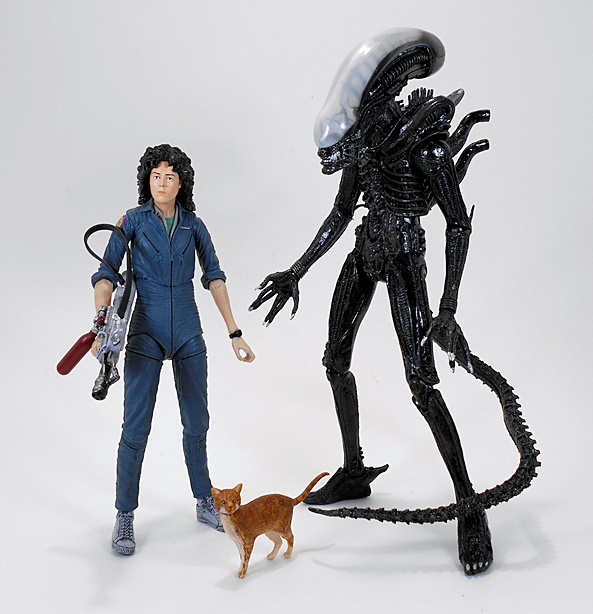 I don’t know if it’s because I waited so long to get these, but it’s hard to remember a time that I was this delighted by a pair of figures that are outside my usual area of collecting. I’ve been getting so bogged down with DC and Marvel and Transformers and Star Wars that I’m glad to have a company like NECA producing such quality figures from other franchises that I’ve enjoyed all my life. They may not feature the superb packaging and presentation of NECA’s “Ultimate” line, but the figures themselves are no less spectacular. Indeed, it’s impossible for me to pick up the Xenomorph and not be impressed each time I handle it. Next week I’ll swing back and take a look at a couple more from the Alien Series.