It’s getting near time for Game of Thrones to come back and while my interest in the series has waned a bit over the course of the last season, I’m looking forward to seeing if it can hook me again. Plus… toys! While I was never a completest when it came to Funko’s Game of Thrones figures, I still have a few of these lying around and waiting to be opened and this seems like the right occasion. Today, I thought I’d check out The Kingslayer. 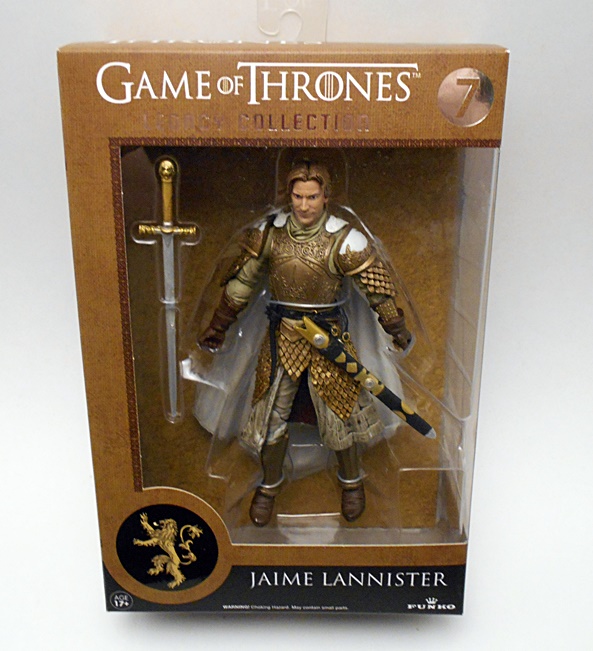 We’ve seen this packaging before in my past GoT Features. It looks great and it’s collector friendly. Each figure is numbered, with Jaime here being #7, and you get the Lannister Crest beside his name. That’s it. I’ve got nothing more to add. The GoT line lasted a little longer than the other Legacy Collection lines, but Funko still abandoned it after just a few waves, which is unfortunate, because it was easily their best. 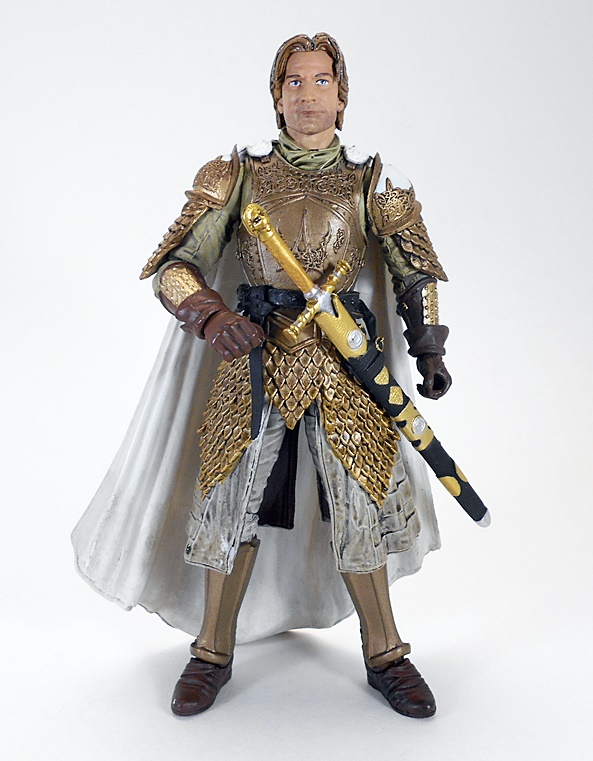 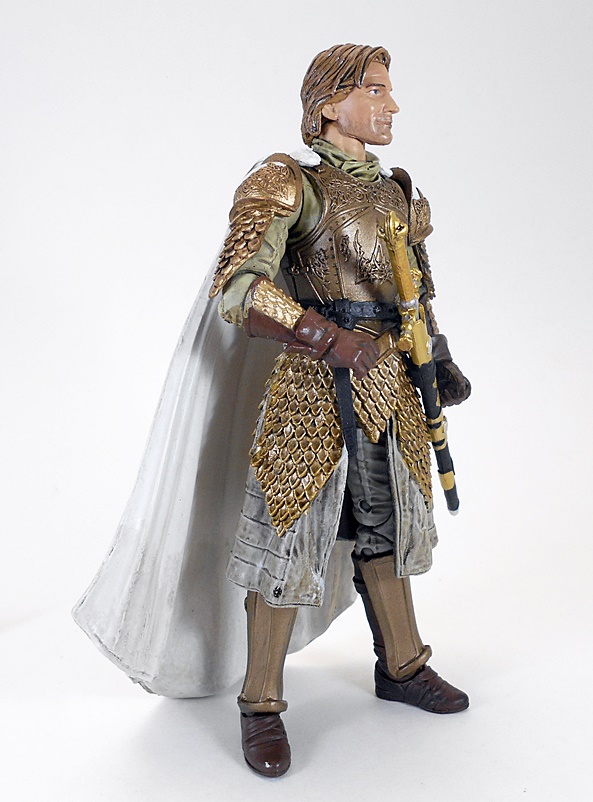 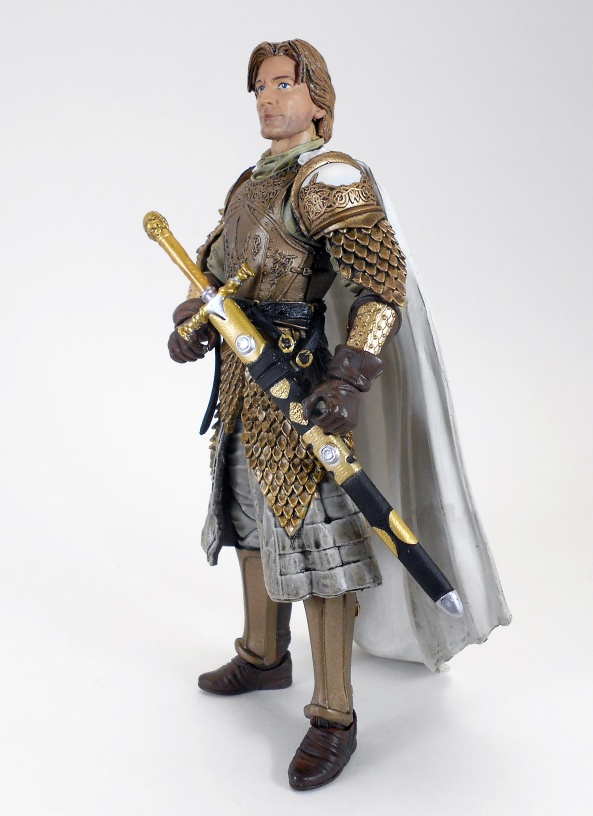 Jaime comes all decked out in his Kings Guard armor and I have to admit, they did a wonderful job on this sculpt. That’s saying something, because this ornate suit of armor is easily one of the most challenging sculpts they have tackled on any of their 6-inch figures. The intricately etched scrollwork on the breast plate and shoulder armor is fantastic, as are the scaled pieces on the arms and skirt. Sculpted undergarments can be seen in the gaps between the armor, giving the armor a convincing layered effect. The two-tone copper and gold paint used for the armor looks great. 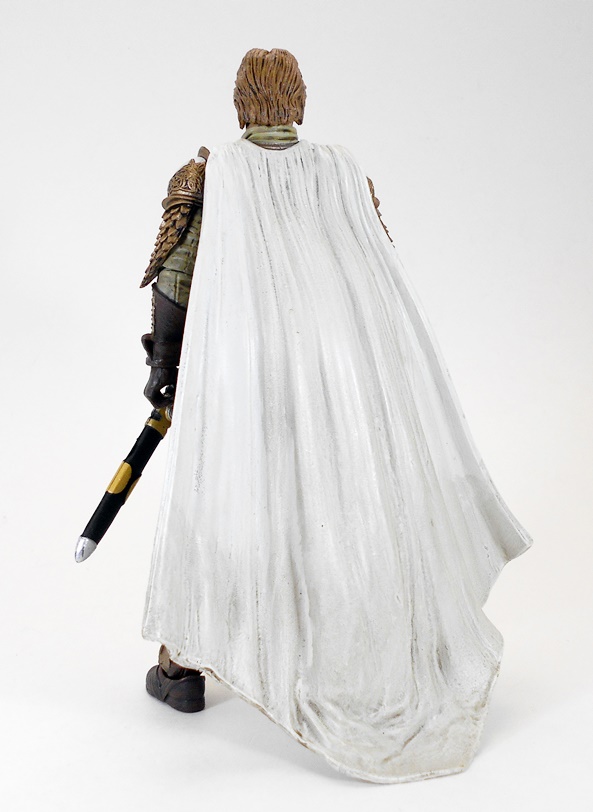 The cape is cast in very soft plastic, cascades off the shoulders and trails on the ground a bit. It pulls away from the figure quite easily so as not to inhibit articulation and it’s light enough that it doesn’t make the figure terribly back heavy. At the same time, it’s there to offer a support for standing the figure in some of the more trickier balanced stances. 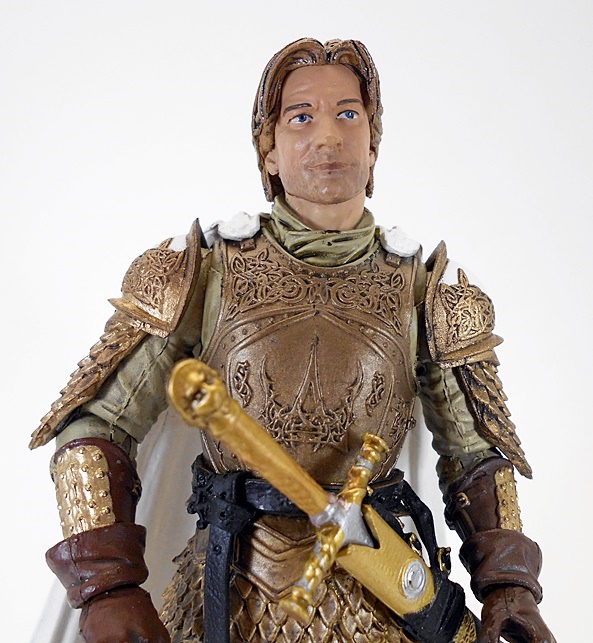 The portrait is a solid enough likeness to Coster-Waldau. I mean, I can at least recognize him in the context of the rest of the figure. The decision to give him a smarmy little smirk might have been a little too ambitious, as I think that’s the aspect of the sculpt that strays a bit. Still, I appreciate them trying to give the head some personality and I’d argue it’s overall loads better than anything we’ve been seeing out of Hasbro in this scale. And with some crisper and cleaner paint, the likeness could have been elevated a bit further. Of course, if you’re more a fan of the books than the HBO Series, maybe the likeness to the actor doesn’t matter. 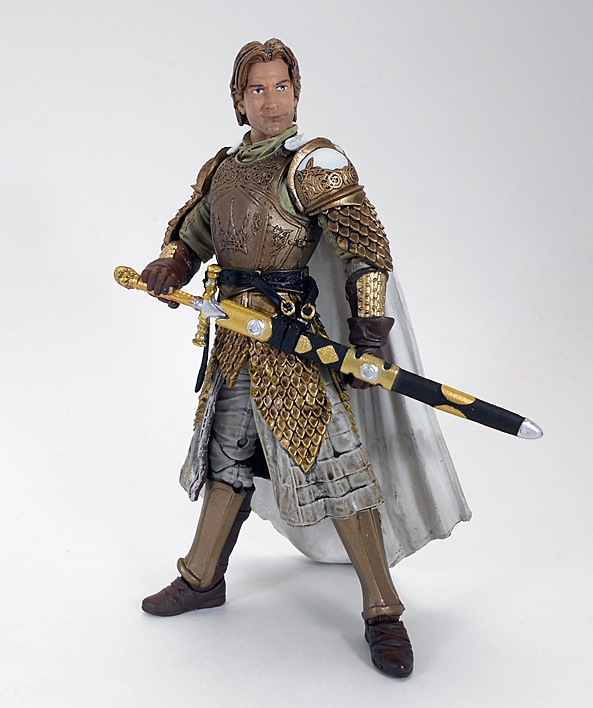 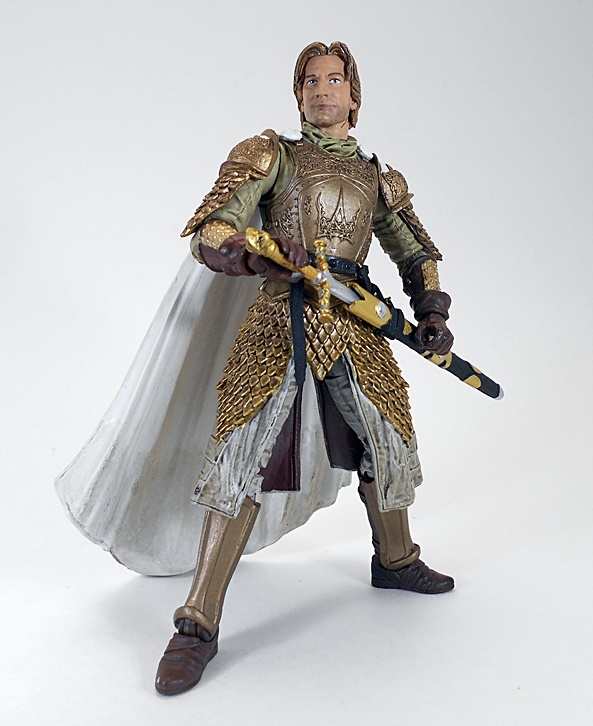 The articulation here is decent and the armor doesn’t create too many problems. The skirt is slit up the back to help give the legs a decent range of motion, but he’s still limited in what he can do from the waist down. The hips are ball jointed, there are swivels in the thighs, the knees are double hinged, and the ankles have rotating hinges and lateral rockers. The arms have rotating hinges in the shoulders and the shoulder armor is soft plastic allowing it to compress. There are rotating hinges in the elbows and wrists. Finally, there are ball joints in the torso and neck. While there was quite a bit of excess paint on my figure’s elbow joints, I didn’t have any issues with stuck joints. 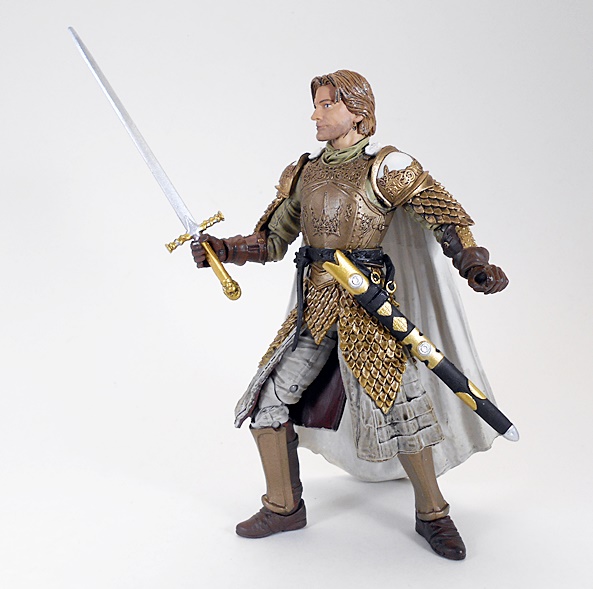 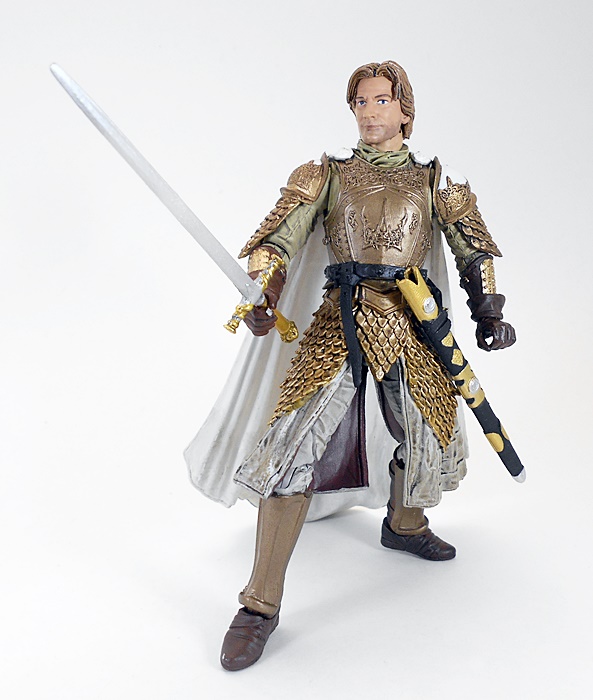 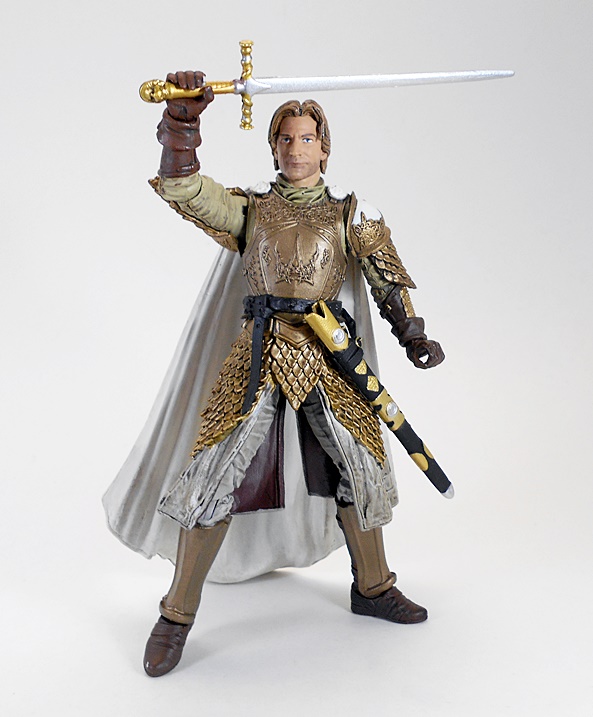 Jamie comes with his sword and scabbard, although the scabbard is permanently attached to the belt, so it’s technically not an accessory. The sculpt and paint on the scabbard is particularly nice. There’s a slight hammered metal look to some of the fixtures and the paint is very clean.
The sword is also a great looking piece, albeit the detail on the hilt is a bit soft, you can still make out the lion head pommel. It fits into the scabbard perfectly. I did have to take a razor and cut the thumb away from the rest of the fingers so that I could open the hand to have him hold it, but that was no big deal. 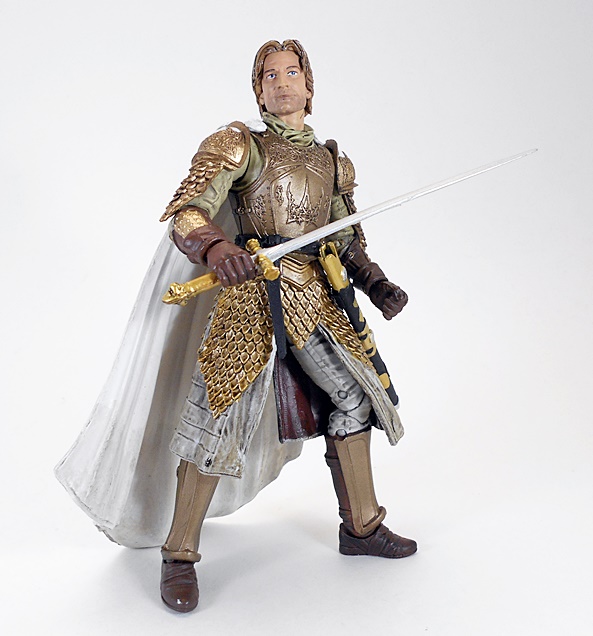 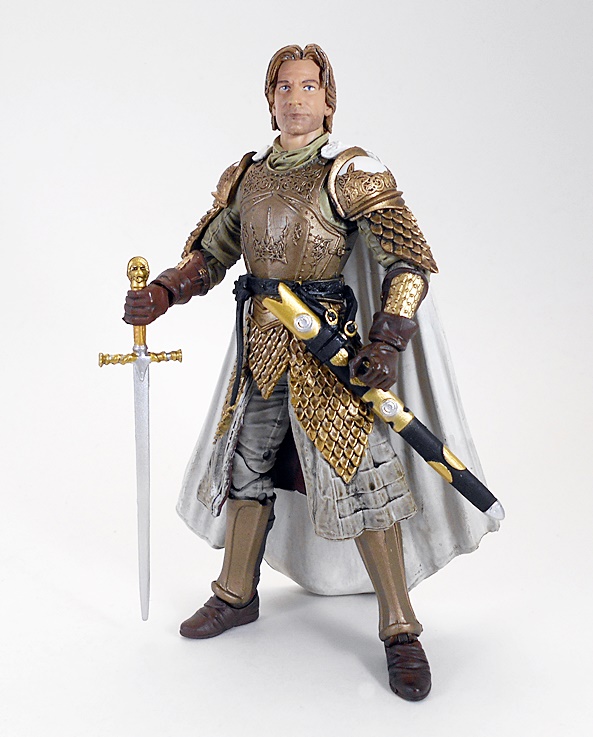 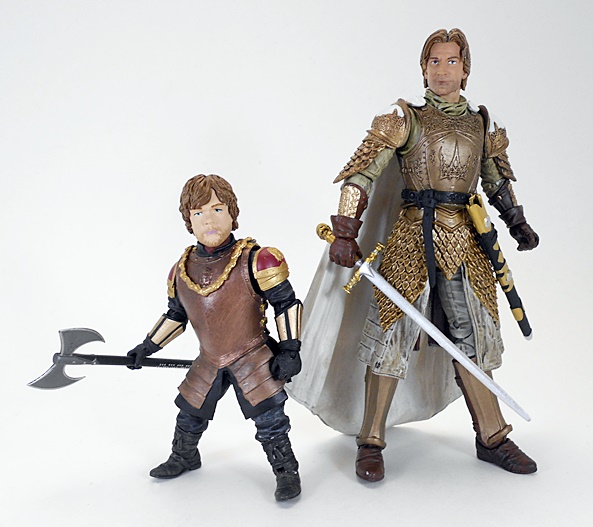 After the blistering (but well-deserved) Features I did on Funko’s Legacy Fallout figures, it’s kind of sad to go back again and see how much potential the Legacy Collection had in its earlier days, before they ran it into the ground. Jaime Lannister is an excellent figure in the overall solid Game of Thrones line and playing around with him makes me wish they had focused more on it, particularly since we never saw figures of Sir Jorah and Bronn, my two favorite characters. With figures like this one, I would have kept collecting this line as long as Funko kept churning them out. Ah, well. When I swing back to this line again in a week or so, I’ll open up Brienne of Tarth.