The Summer of 2014 saw a lot of Action Figure related Kickstarters and one of the big ones was Vitruvian HACKS (Highly Articulated Character Kit System) from the folks at Boss Fight Studios. This 4-inch line based on Greek Mythology boasted great sculpts and a system of interchangeable parts making these figures perfect for collectors and customizers alike. The project was wildly successful, but hit a lot of delays for reasons I have no intention of going into here. To make a looooong story short, the figures were originally slated to ship in February of 2015, but in actuality are only now shipping out to backers. I got my initial Backer Reward wave late last week, but I’m still waiting on the four additional figures that I ordered at the time the project ended in July 2014, plus another two I purchased when the figures went up for general Pre-Order in December of last year. While I’ll be the first to admit my patience wore thin toward the end, I was always confident the figures would come and they would be great. These guys know what they’re doing and I think they did a fine job when faced with numerous hurdles. I was going to look at two figures in this initial Feature, but I ran long…

The figures come packaged on landscape-orientated cards and I am absolutely thrilled to say that they are collector friendly. I still remember how difficult it was for me to make the decision to cut into the bubbles of my Legends of Cthulhu figures from Warpo Toys, but there’s no such anguish here. You just fold back one of the edges of the plastic front and slide the card back to remove the tray from the bubble, thus having your cake and eating it too. Some of the accessories come on the tray and others are bagged behind it. The packaging displays well standing, and there’s also a J-hook if you want to hang them on the wall.

The card art is colorful and customized to each character. The back of the card features a profile of the character. You also get a classic “Collect Them All!” spread of each of the figures in Waves 1 through 4. The Spartan Warrior is where this line began, so I will in turn begin with him. I do want to proceed with one caveat: The customizaiton aspect of these figures does not interest me at all, so I’m not really going to touch on it. I’ll just note that if you have a bunch of these figures, some custom skillz, and a Philips-head screwdriver, the sky is the limit.

So, I have to admit, after waiting so long, taking the Spartan Warrior and his accessories out of the package felt like an event. A lot of impressions came to mind as I started to play around with the figure. Let’s start with the good stuff first, and frankly it’s really almost all good stuff. The sculpting here is excellent. The figure is built on a nearly naked buck with some excellent definition in the muscles. Yes, that means that all the armor is removable, and while it looks like it would take a bit of work to get the grieves off, the armor on the torso just un-pegs and is worn like a vest. The chest plate also features sculpted muscle tone and the individual strips of the skirt are clearly defined, despite being one piece. From painted preview figures to final production, this guy remained consistent through and through.

The paint quality here is also solid work. I adore the bronze paint they used for the armor as it features just the right amount of sheen. The red and white paint on the skirt makes the deco pop beautifully. Each of the tiny straps on the sandals are painted and the paint on the head is absolutely immaculate. There are a few minor flubs here and there along the skirt, but these are hardly noticeable when you’re just viewing the figure in hand and with the naked eye.

While there’s obviously no likeness to be beholden to (although possibly inspired by Gerard Butler), I dig the head sculpt a lot. There’s a lot of sculpted detail in the hair and the somewhat larger eyes give the figure a distinctive, somewhat stylized, look that works for me.

The articulation is solid, but it’s missing a few key points I would have liked to see in a figure in this price range. What you do get: Lots of rotating hinges! They’re in the shoulders, elbows, wrists, and ankles. The legs are ball jointed at the hips and have double hinged knees. There’s a swivel in the waist, a ball joint in the torso, and another in the neck. What’s missing are swivel cuts in the thighs and when you couple that with the grieves limiting the ankle articulation a bit the legs can sometimes look a little awkward when posed. That having been said, you’ll note the lack of figure stand in any of my action shots, which means he stands just fine on his own in almost any pose. It hardly even took much work on my part. 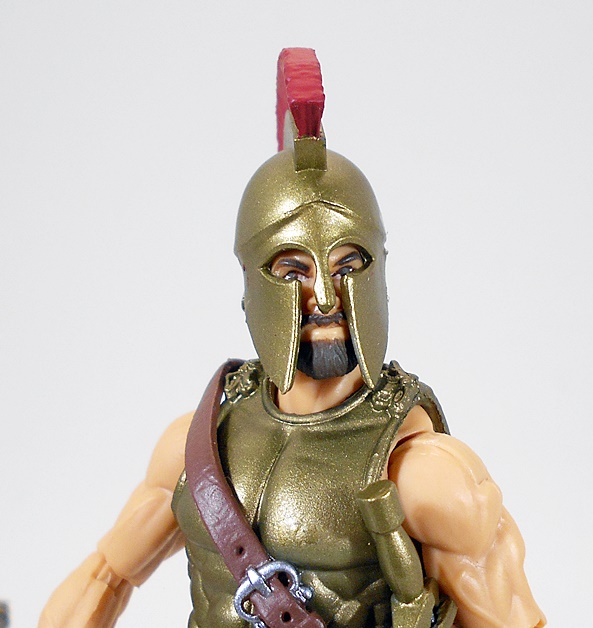 Moving on to the accessories, you get an incredible looking helmet that fits the figure’s head beautifully. I can’t remember a piece like this ever being designed to fit a figure this well in the 4-inch scale. It has the same gorgeous bronze paint as the figure’s armor and a bright red comb. This piece and the way in interacts with the figure is quite literally perfect. 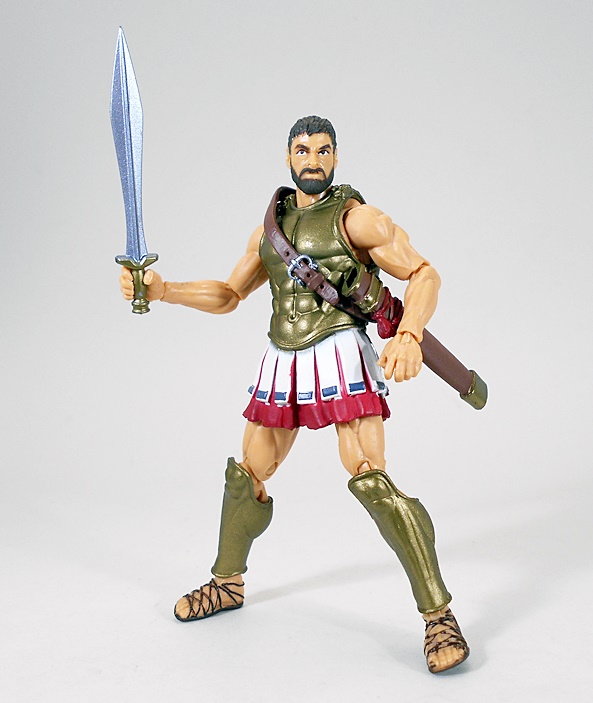 Next, we have the scabbard and swords. The accessory is worn on a shoulder strap that’s pegged into the scabbard. Again, the fit here on the figure is exceptional when you consider the scale. It sits high on the figure, which I believe is historically accurate, and the fact that it’s pegged into the strap means that you can swivel it to get a nice position for the figure to draw the sword. The paint on the strap’s buckle as well as the fixtures on the scabbard and the red tassel all look great.

You get two swords (xiphos), one long and one short, with identical hilts. Both will fit the scabbard, but the longer one is a tight fit and a bitch to get out, so I’ve been keeping the smaller sword in there. It comes out easy and if you are only displaying him with the one blade, there’s no way to tell it isn’t the longer one. The swords are gorgeous, with leaf-shaped blades and bronze-painted hilts that match the armor and bright silver blades. He can either sword in either hand perfectly. 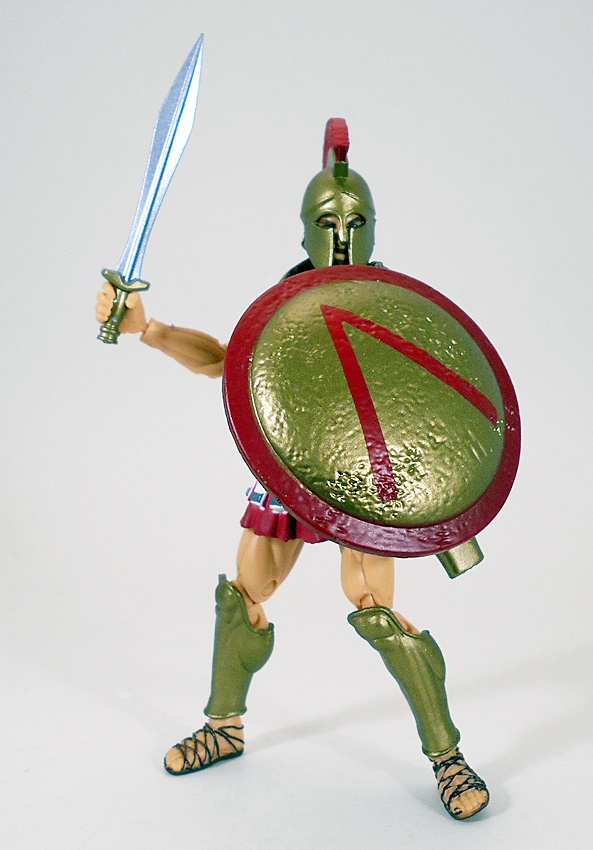 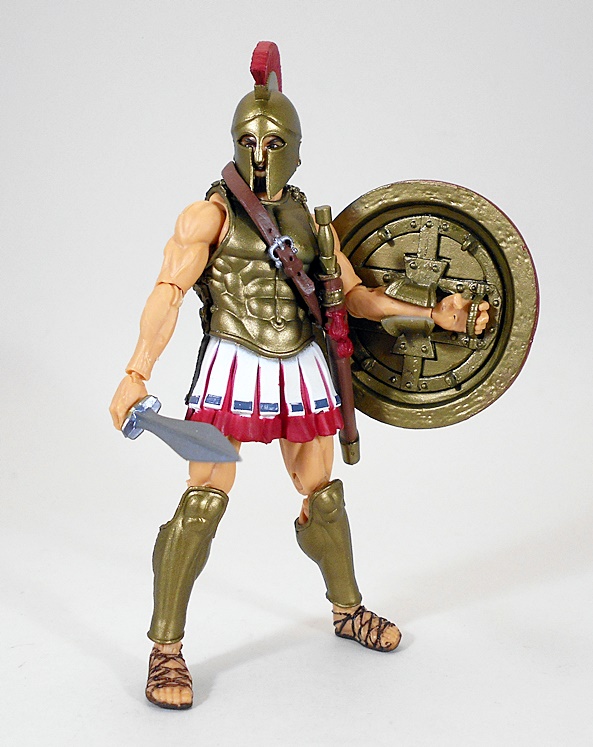 Next is the shield, and this is a real showpiece of his accessories. And rightly so as the hoplon is where the Greek Infantry’s name, hoplite, comes from. The front has a sculpted hammered look to it and a gorgeous bronze and red paint job. The reverse of the shield is fully detailed and features a grab bar and sleeve to accommodate the Spartan’s arm and hand. I’ll note that it was really tough for me to get the hand to hold the bar. Ultimately, I popped out the hand, got it in position and then fed the arm through the soft plastic sleeve and reconnected. Since the figure comes with an identical set of extra hands, I’m going to opt to just leave one grabbing the bar at all times. 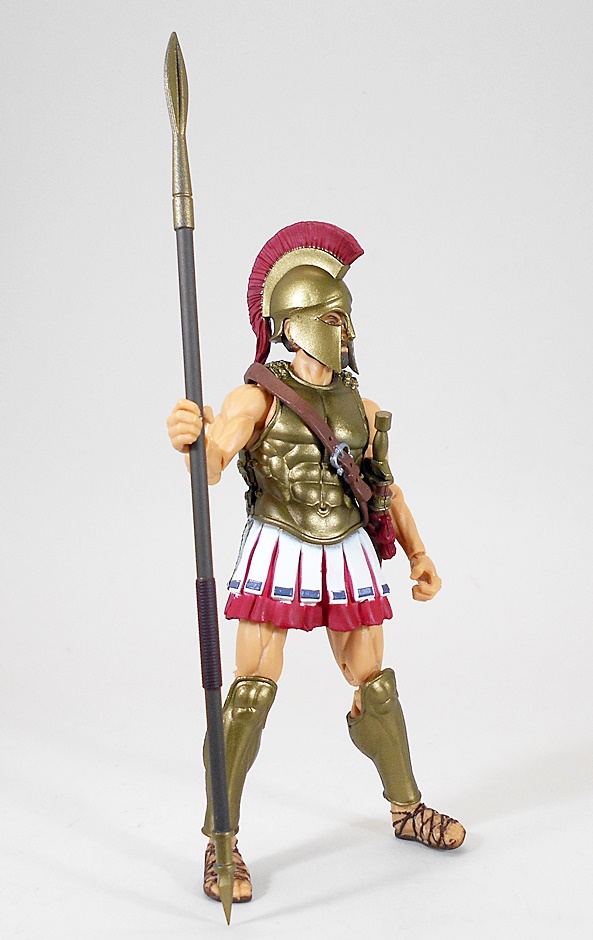 And that brings us to the final piece of the Spartan’s arsenal, the spear (doru). Like everything else about this figure, Boss Fight spared no expense on the detail and paint on the spear. It has a sculpted tip and butt cap and a sculpted grip, all beautifully painted. It’s a solid piece too, with no warping at all, and both the head and butt are super sharp and pointy. 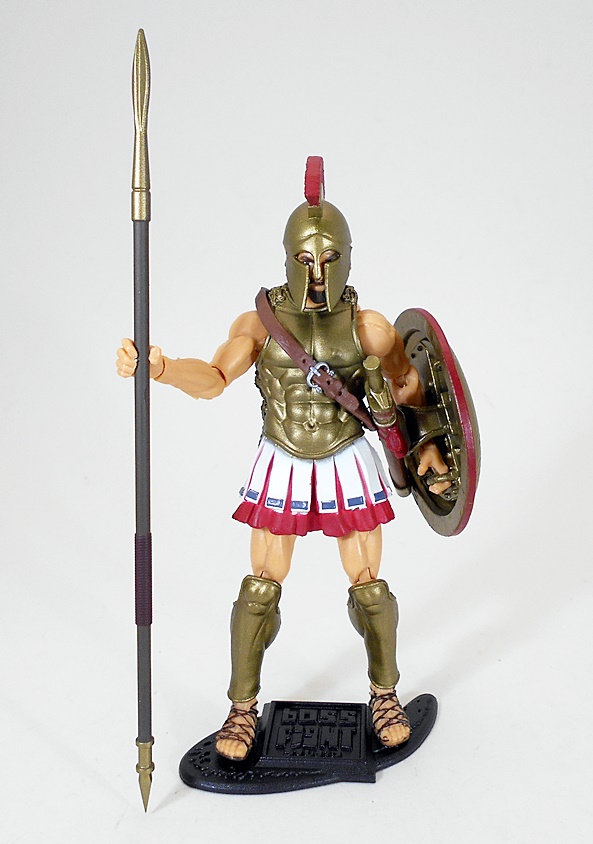 The Spartan Warrior also comes with a sculpted Boss Fight Studio stand, which is included with all the figures. It’s a functional little piece that pegs into the figure’s feet and is perfect if you’re lining your figures up for a museum-style display. But as I said earlier, the figure’s balance is such that stands really aren’t needed for most of the poses. 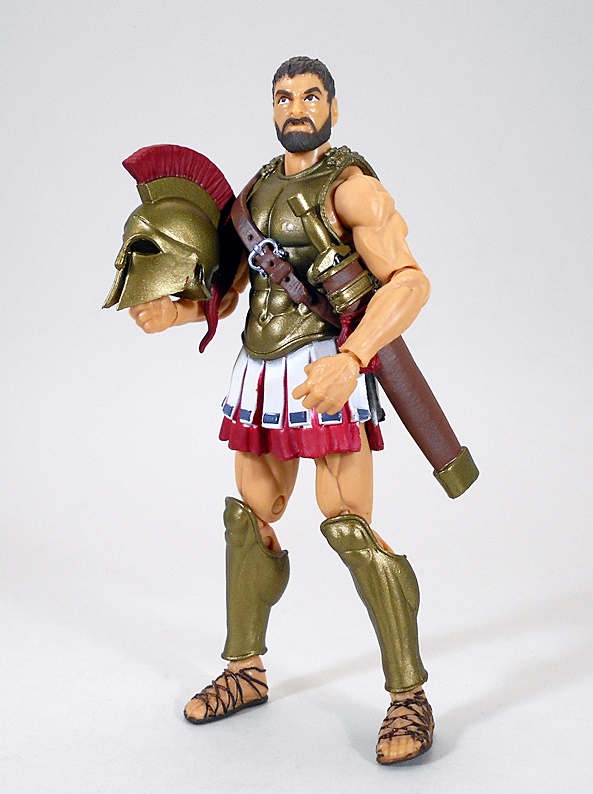 If you can’t tell, I am absolutely delighted with this figure. Even the one minor issue I have with the legs is easily forgiven by the care and attention to detail that went into everything about this guy. The base figure is solid and the accessories are among the best I’ve ever seen executed in this scale. If you missed out on the Kickstarter, the Spartan Warrior is currently available for Pre-Order through Boss Fight Studios’ online shop at $20. However, they’re still processing and shipping Kickstarter orders, and made it clear that they won’t be processing the Pre-Orders until all the KS business is taken care of. While $20 may sound like a premium to pay for a 4-inch figure, it’s not a whole lot more than you’ll pay for Hasbro’s 4-inch Black Series right now. And you’re also getting a premium quality product to go along with that premium price. While I’ve only opened the one figure so far, I have to say I’m very glad I backed this KS, and it was worth the wait.

And since I intended this to be a Double Feature, I’m going to run off and recoup a little and I’ll be back later this afternoon with a look at the Cursed Stone Spartan.