Originally featured in Star Trek III: The Search for Spock, the Klingon Type 3 Disruptor would go on to be a very familiar weapon, commonly seen throughout the rest of Trek’s TV and motion picture run. By my count, this same design has been in service for about 100 years, much like the Bird of Prey, and both instances are very conveniently cost effective for producers of the franchise who don’t have to keep coming up with new models and props. Indeed, when you consider the changing trends in Starfleet weapons, I’d dare say this design has become one of the most iconic pieces of equipment in the series. And that’s fitting, because the design is so very Klingon and I absolutely adore it. It’s not sleek or pretty, but it has a certain primitive and swashbuckling feel about it. Starfleet weapons look like sterile implements, but the Klingon Disruptor looks like it has a history behind it. It certainly resembles a standard firearm more than most of Starfleet’s weapons, or at least the ones appearing in The Next Generation era. With a traditional pistol-grip leading to a breech-like body and a beam emitter positioned at the end of three silver pylons that resembles a gun barrel, this is a design that I fell in love with the very first time I saw Kruge use it to vaporize one of his own officers. Let’s check out Diamond Select’s version of this warrior’s honorable weapon.

If you’ve picked up any of DST’s Starships, Phasers, or other gear, then the package here should be familiar. It’s a blue and black box with a bit of a starfield deco. The front panel features a window that shows the weapon and a “Try Me” hole that lets you sample one of the electronic sounds. The back has a picture of the Disruptor and a little blurb about it. This is a big box for an item that is much bigger than I was expecting. The only other Klingon Disruptor I ever owned was the Playmates scaled down version and going on just my memory, this one is huge by comparison. 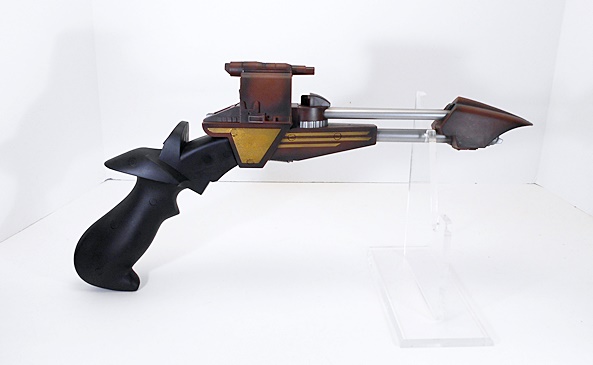 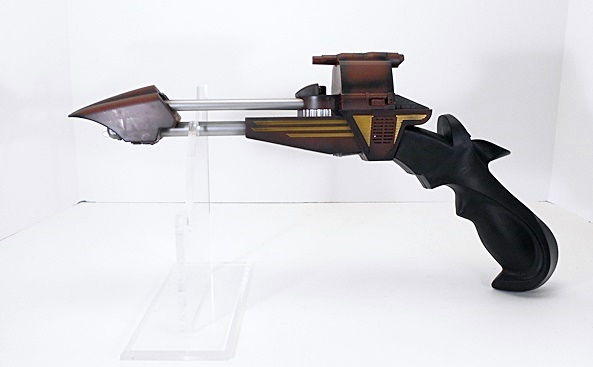 Diamond’s version is perfectly sized and while it feels a lot lighter than I imagine the real things would be, it doesn’t feel cheap in the hand and it has a decent balance. The quality straddles that line between toy and replica. Some of the sculpted details are a tad soft, there are visible seams in the plastic, and the weathering is very simple, but they did take the time to plug the screw holes on one side. Mine has some scratches that are clearly not intentional, but they work toward making it look more properly used. This is a piece that looks good on display and is perfectly suited to cosplaying at a Con, assuming they still let you carry anything that’s even vaguely gun shaped any more. What this isn’t is a collector’s grade prop replica.

The electronics on this piece are very simple, especially when compared to some of DST’s phasers. There’s a silver sliding switch on the back that puts the weapon into three different modes. I’m assuming, the equivalent of Stun, Kill, and Disintegrate. Each time you move it, it registers with a sound. The trigger is appropriately placed as a thumb button up where the hammer on a real gun would be. Pressing it fires the appropriate sound and lights up the red emitter on the business end of the weapon. Normally with DST ships and equipment I record a little video to show off the electronics, but it wasn’t even worth my time here. The emitter light is sufficiently bright, but the sounds are mediocre at best and not great quality. If you’re expecting something that clearly resembles the awesome sound this weapon made in Star Trek III, you’re going to be disappointed.

While DST’s phasers have had features like removable palm units, this disruptor is pretty much just a static piece. The “breech” does slide back, but it’s designed to do that in order to reveal the battery compartment. I do recall seeing the Klingons “cock” this thing at one point (I think before beaming down to Genesis), but I think it was achieved by twisting the barrel. Still, sliding this piece back a bit and pushing it forward could achieve a similar look, I guess.

It’s no secret I’m a sucker for Star Trek Role Play Equipment and seeing as how much I love the design of this piece, I’ve had my eye on this Disruptor for a long time. I’m pretty sure it’s been on the market for well over a year. The issue for me was price and the hit and miss history I’ve had with the quality control on DST’s Star Trek items. The Disruptor originally retailed at about sixty bucks, which is quite ludicrous for what you’re getting. I’ve since seen it quite often for as low as $45 and even there I balked. Turns out the right price for me was $27 because that’s what got me to finally pull the trigger, if you’ll pardon the expression. At that price, it’s a decent piece, even if the electronics aren’t as good as I had hoped. It’ll still look great hanging on the wall alongside the rest of my sci-fi arsenal.