It’s Transformers Thursday again and here we are at the second part of my look at Hasbro’s Generation 2 style Stunticons. Last time we checked out Motormaster and today I’m going to take a look at Menasor’s legs: Dead End and Brake-Neck, or Wild Rider, if you prefer. We already saw the packaging last week, so let’s jump right in with the alt modes! These are, of course, straight repaints of the original figures, so we’re mostly going to be talking colors here…

So, straightaway I love the Sideswipe and Sunstreaker vibe that I get off of this pair. In the world of 90’s toy repaints that usually land somewhere between Swatch Watches and a Trapper Keeper, these guys are really not that outlandish. They are, however, blindingly bright. Dead End adopts a sumptuous candy-apple red and Brake-Neck a brilliant yellow. But just in case their colors aren’t crazy enough, they advertise their Generation 2 pedigree with the giant G2 Decepticon emblems on their hoods. Both emblems are in each car’s base color against a black backdrop and I really enjoy that they match each other. 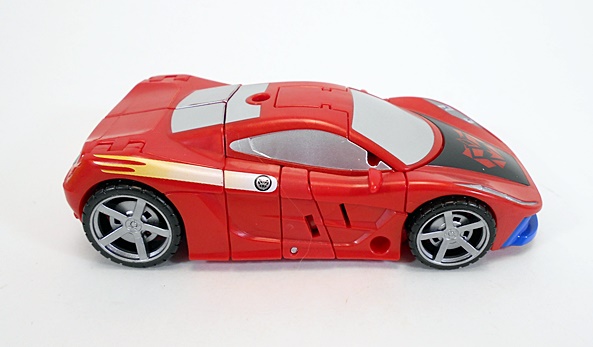 Dead End’s deco does mingle with the outrageous by having a bright blue front bumper. It looks like he needed to replace it and went to Wheeljack’s U-Pull-It and could only find a blue bumper from his make and model and will eventually get around to painting it later, but right now he doesn’t have the money for it. He also sports some totally bitchin flame streaks down the side and teeny tiny G2 Decepticon emblems on what looks like it could be his gas caps, but that doesn’t make sense because there are two of them and he’s not a Jaguar. Still neat, though. The coloring is rounded out by some relatively sedate silver painted windows. 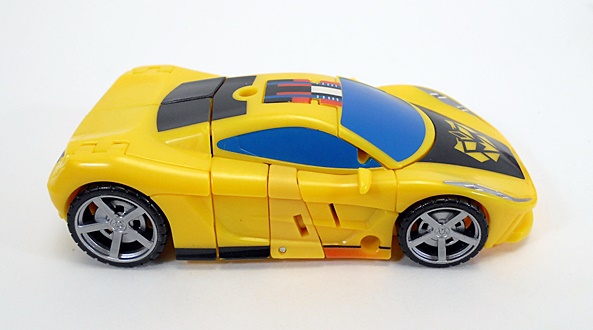 Brake-Neck’s deco is mostly just more yellow. He does have a little gradient orange trim behind the front wheel wells. He also has this crazy pattern on the roof that sort of reminds me of the cover of Pink Floyd’s The Final Cut. The rear window is black, but the side windows and windshield are painted with a very vibrant blue. Alright, let’s transform these guys and check them out, starting with Dead End… 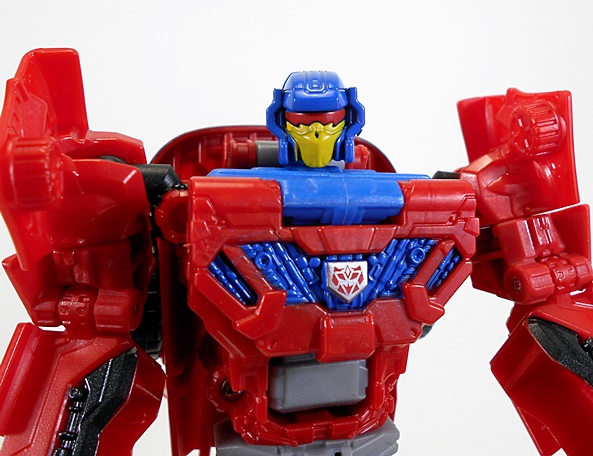 Again, he’s fairly subdued for a G2 coloring. You get more of that lovely bright red with a good mix of gray and black. The bright blue chest really makes the sculpted detail there stand out and the yellow, red, and blue paint on the head is just fantastic. I don’t recall being too smitten with this head sculpt when I looked at the original figure, but here I’m really digging it a lot.

Brake-Neck is a little more surprising in that he sports some of that bright blue from his windows on his upper legs and fists. You also get some beautiful silver and his chest is black. The real treat here is the Wildrider head with the purple face. Man, do I dig that! I’ll also point out here that while Hasbro has been notorious for using some really shitty yellow plastic in the past, this stuff is actually really nice looking. 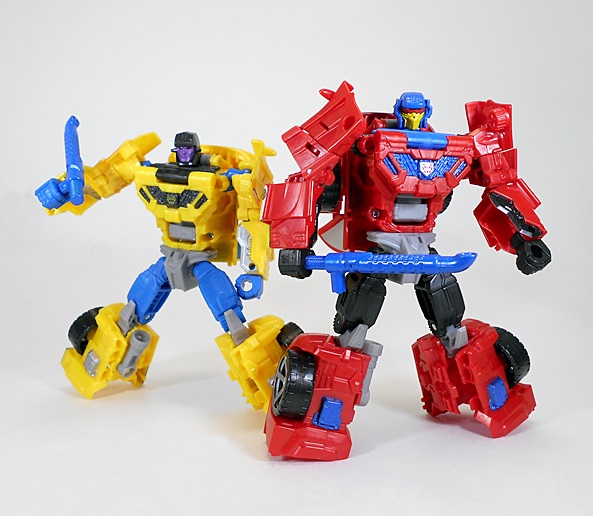 Both Stunticons come with the same exhaust pipe truncheon, which can be held in their hands or pegged onto their vehicle modes. I’m slightly disappointed that they didn’t paint them different colors, but I suppose they were the same colors on the original releases too, so maybe I was expecting too much there.

For two straight repaints, I’m surprised at how excited I am by this pair. The coloring just looks outstanding on every level and a lot of that is owed to the beautiful quality of the plastic and the way it holds the vibrant yellow and red. They really are a couple of beautiful figures and as bright as they are, I’d say the coloring on these could probably even win over those crazy people out there who are adverse to the whole G2 thang. Next time, I’ll wrap up the limbs with a look at Dragstrip and Breakdown!