Here we are at the final installment of my look at Hasbro’s Generation 2 Stunticons. I’ve already checked out Motormaster and the four Deluxe figures, but before we get to Menasor, let’s take a quick look at the runt of the litter: Blackjack!

I was curious to see what they would do with the tiny Stunticon sports car, since Blackjack is the one figure that Hasbro didn’t have a G2 original to reference. They went for a purple and blue deco that matches Motormaster fairly closely and I think it looks fine. He sports a blue G2 Decepticon emblem on his hood and the windows are painted black. You can still plug his axe onto the back of the car to form a spoiler and what I like to think is a roof cannon, because… why not? 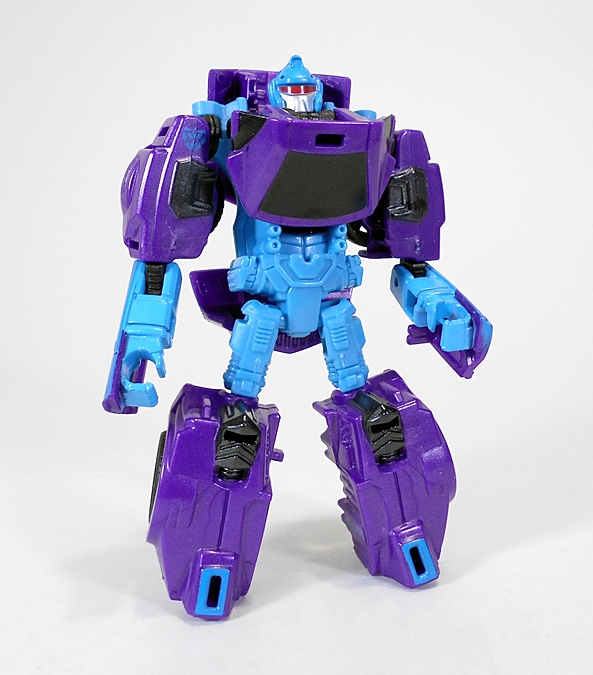 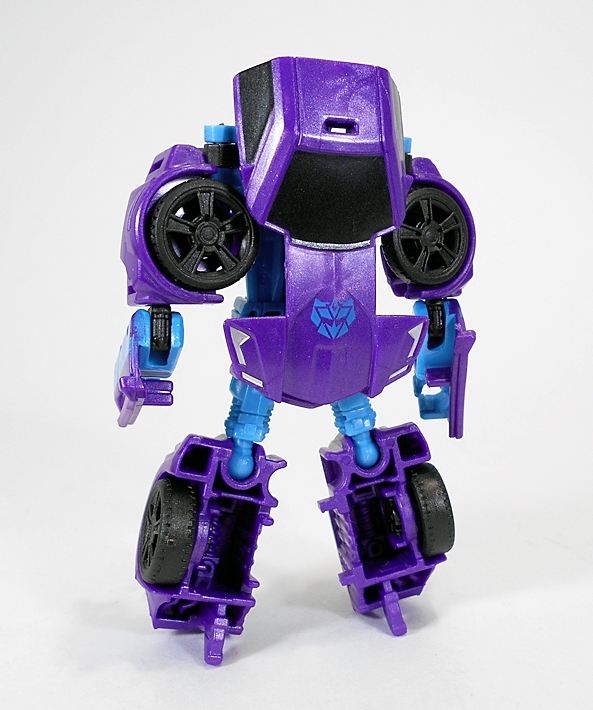 The transformation here is still as simple and clever as always. The robot mode balances out the color scheme by exposing more of the blue. I still like the way the wheels are angled back on his shoulders and the bulk of the car’s top becomes his backpack. He’s a great looking little Legends figure.

Plenty of ball joints makes for solid articulation and he can hold his axe in either hand. The only thing missing is a Decepticon emblem somewhere on his front. I like my Transformers to wear their faction symbols proudly. Based on the transformation, it’s easy to see why he doesn’t have one, and it was an issue common to the previous Blackjack. 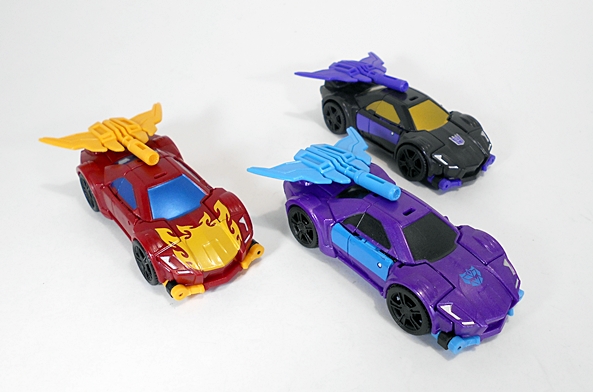 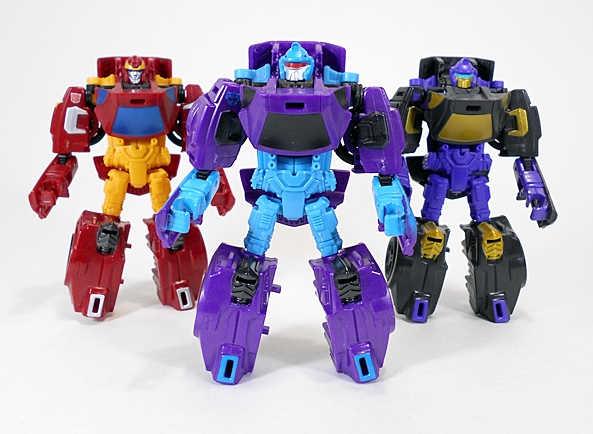 For a mold that’s been around the block three times already, I think this guy still holds up well. I’d put this one tied with the original Blackjack release as my two favorites and Hot Rodimus bringing up a distant third. But enough about Blackjack… let’s form G2 Menasor! 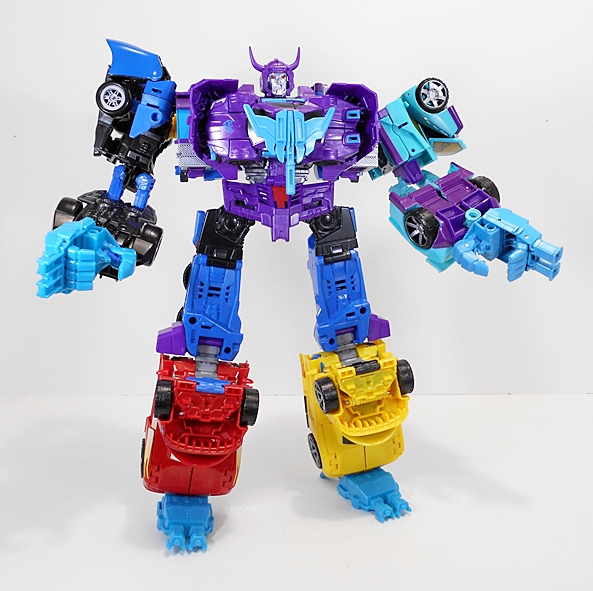 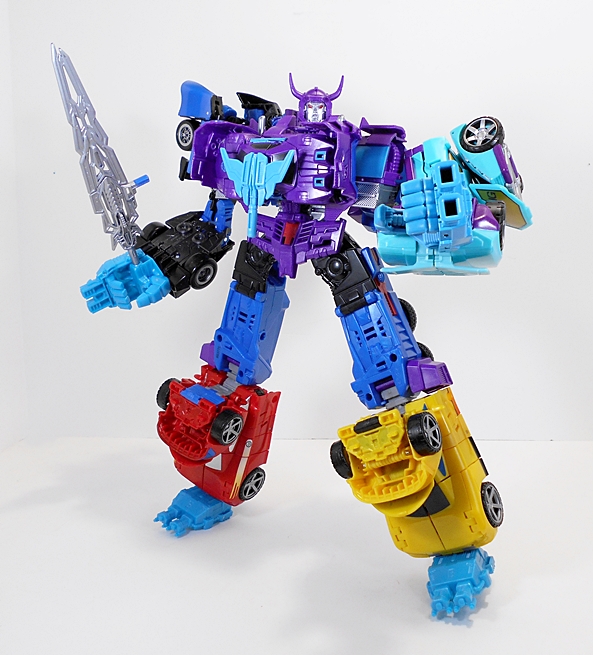 So, some of you may recall that I wasn’t all that keen on Menasor’s combined mode the first time around and I’m sorry to say that this G2 version doesn’t do a lot to improve on that. Of course, my issues with Menasor had nothing to do with his paint job, so I wasn’t expecting a repaint to solve anything. With that having been said, this version feels slightly more stable to me. Just getting the previous release to stand beside him was a chore. Unfortunately, he still suffers from a host of problems, like the shoulders coming un-pegged every time I move his arms, and the fact that Blackjack will not peg into the chest on his own. I used heaping helpings of blue tack to get him to stick for the photos and even then he popped out a few times. This guy is just no fun at all to play with because he keeps falling down or falling apart. 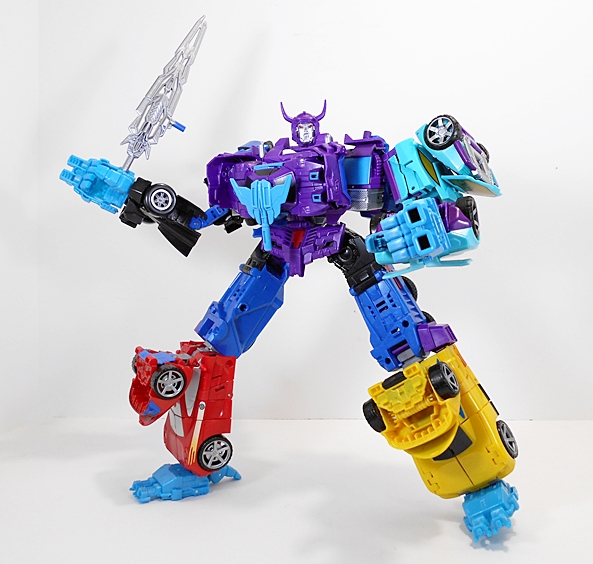 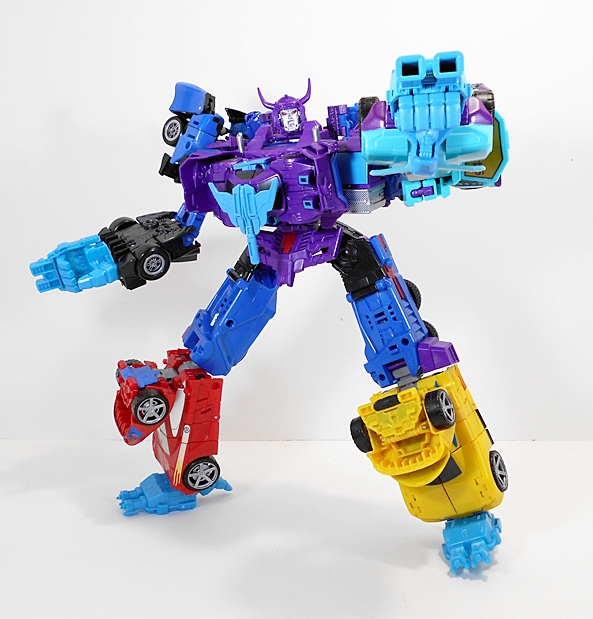 As for the coloring… it’s brilliant! The fact that they matched the coloring between Blackjack and Motormaster makes for a good looking chest piece, at least while he stays in place. My preferred combination here is the same as the other Menasor with Dead End and Wildrider making the legs. It works for this deco pretty well as it gives the upper half a more uniform color and makes the legs really pop. It’s a striking deco to be sure. 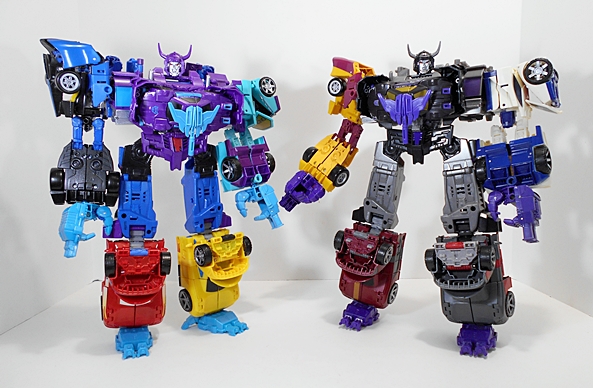 In the end, I always knew this series of Features was going to be anti-climactic because Menasor remains my least favorite of the three Combiner Wars teams that I own (the others being Defensor and Superion). But just like the first time around, I bought these guys mainly for the individual modes and as a team, these figures did not disappoint at all. They look incredible on the shelf and owning them has convinced me to grab the G2 Superion set as well because I just really want a Generation 2 shelf in my modern Transformers display. With an MSRP of $99, the value here feels about right, figuring on four Deluxes at $16 a piece, a Voyager at $25, and a Legends at $10. I was able to grab these guys for $85 and that made the deal all the sweeter.

Next week, Transformers Thursday is going to go back into a short hiatus, so that I can work a three-parter into the middle of the week. It should return the following Thursday, but it’ll likely remain spotty throughout the Summer as I wait for Takara’s Unite Warriors teams to be released.