In case you missed the memo, Saturdays at FFZ are all about the anime figures now. And that’s convenient, because I am on a serious Kantai Collection kick and have been picking up a lot of figures from this series. Today, I’m not looking at one, but rather three figures from SEGA’s “Super Premium” Prize Figure series. Yeah, I couldn’t decide which one of these gals to start with, so I just figured I’d do all three Destroyers from The Third Torpedo Squadron.

The figures come in pretty standard window boxes and with hardly any English… nope, not even the character names! Just the full title of the series, “Fleet Girls Collection KanColle Animation Sequence!” Yeah, that’s a mouthful. The boxes are color coded to match the girls within, so Fubuki’s blue and Mutsuki’s green match their school uniforms. And Yuudachi’s is pink, um… because… Poi? There’s some nice character art on the side panels and overall, these look nice but the boxes are a little on the flimsy side and prone to shelfwear. 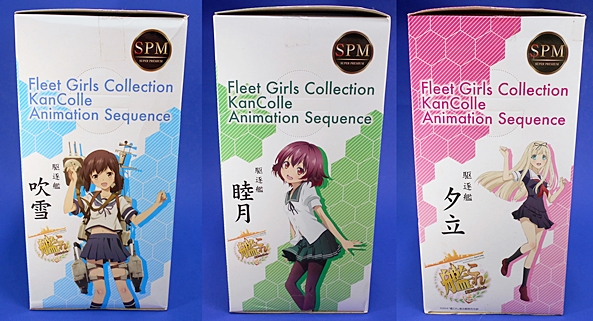 It’s worth noting that SEGA isn’t kidding around when they call these “Super Premium” as the boxes measure 10-inches high and the figures, at about 9 1/2-inches from the base to their masts are a full 1/7 Scale. No, they’re not your average Prize Figures, and I was positively shocked by the size of them. The gals come all assembled. Just peg them into their bases and they’re ready to launch! Let’s start with Fubuki… 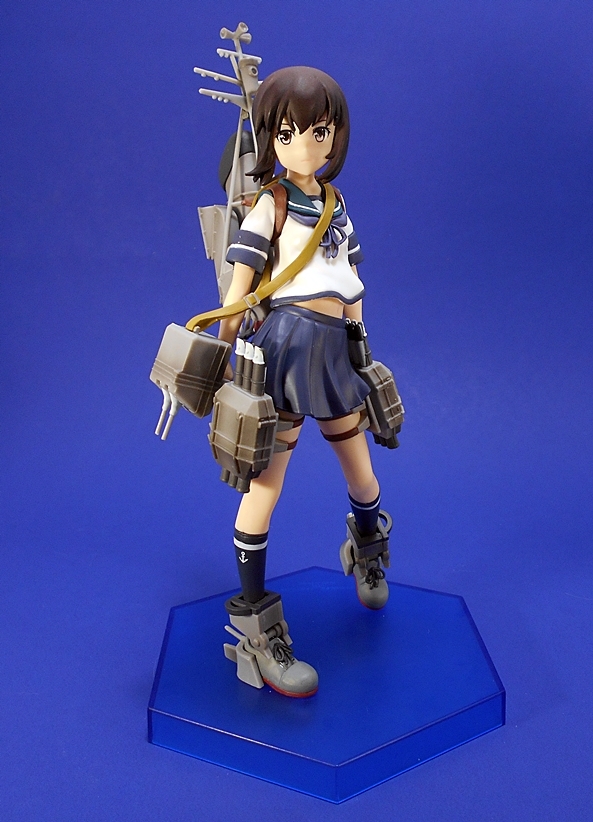 Special Type Destroyer Fubuki is clad in her blue and white school uniform and all geared up and ready for battle. It’s a pretty passive pose (as is the case with all three girls), but I like hers the most out of all three. Sure, something a little more action orientated would have been fun, but I think this pose works especially well when displaying them together. She has a pretty neutral expression, although definitely the most serious of the three, and I like how her hair is blowing just a little bit off to the side. 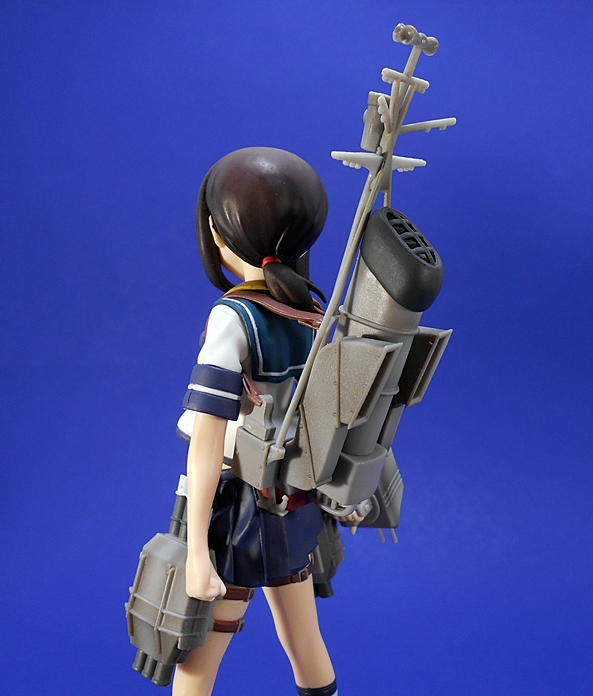 The sculpt is all around solid, albeit a little soft on the hardware pieces. Her armaments include two 61cm triple torpedo mounts on her hips and her 12.7cm twin gun mount held at her side in her right hand. Her rudder heels look great as does the tower, smokestacks, and mast assembly on her back. Next up… 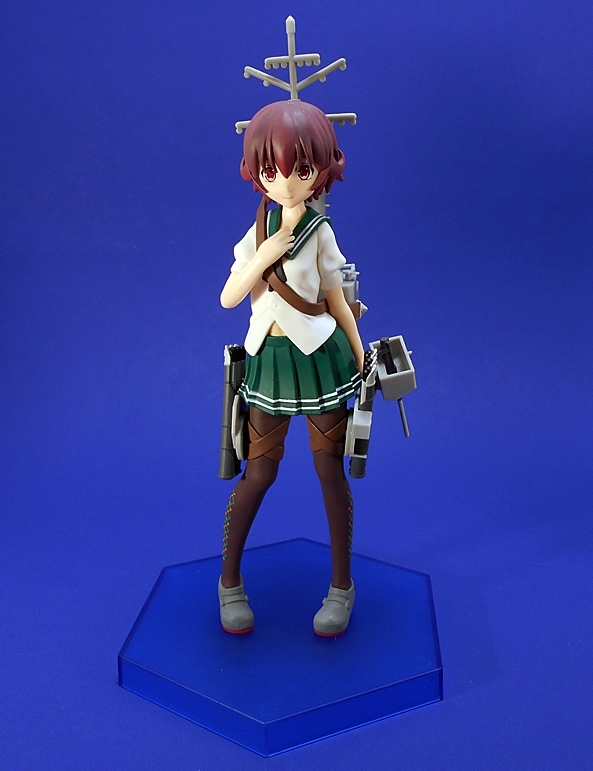 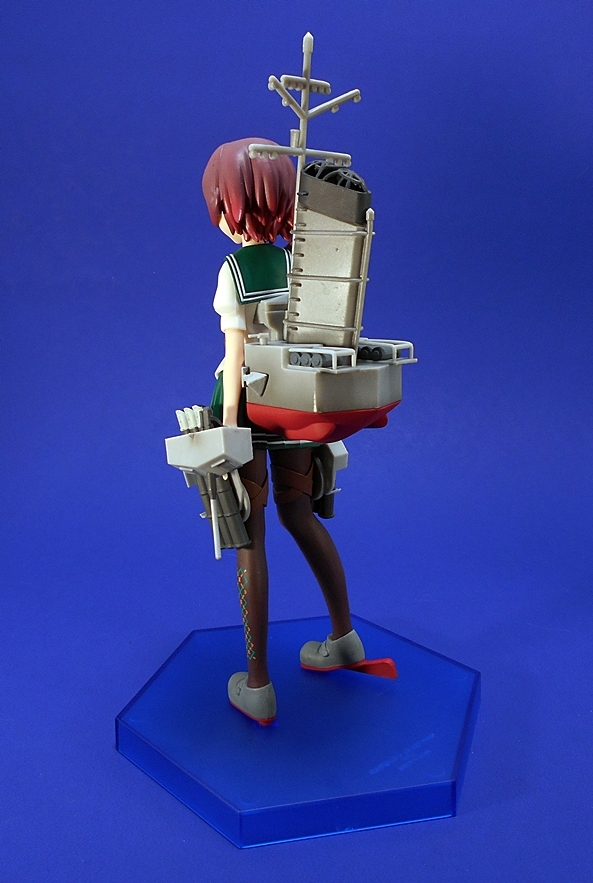 Mutsuki! Besides the coloring, Mutsuki’s uniform features some nice changes from Fubuki’s, including a different collar and a button down blouse, and full stockings. She also has a slight smile and her right hand raised to her chest. Nothing about Mutsuki’s character really stuck with me from the series, other than her being Fubuki’s sidekick for most of it.

Her armaments include two 61cm triple torpedo mounts on her hips, although these are different configurations than Fubuki’s, with the tubes exposed and criss-crossing straps securing them to her legs. She wields her 7.7cm machine gun mount on her left hand, held down at her side. I really dig her smokestack and mast assembly, as it comes equipped with two racks of depth charges. Mutsuki’s heel rudders aren’t nearly as pronounced as Fubuki’s and only one can be partially seen. And that brings us to… 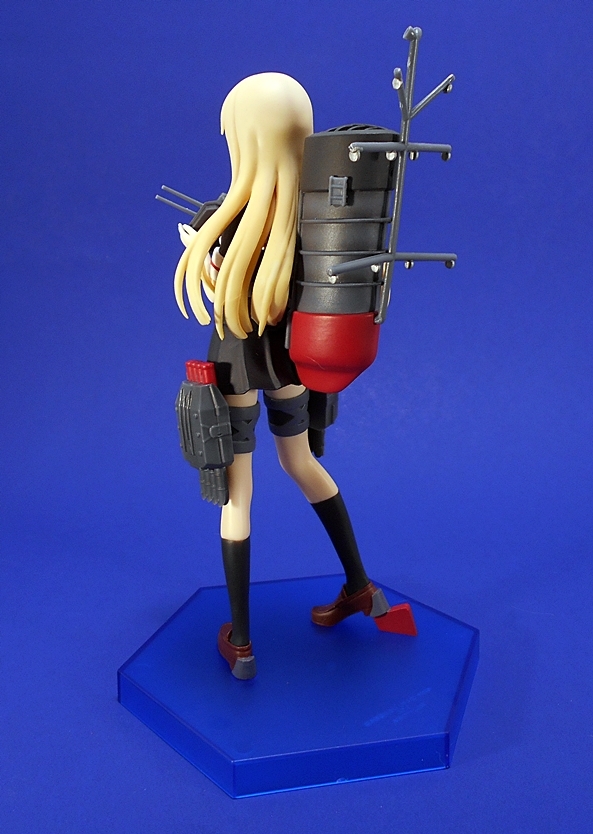 Poi! Yuudachi is without a doubt one of my favorite characters in the series. She’s just hilarious. This is Yuudachi before her sudden remodel. Her mostly black uniform is more distinctive than those of her fellow Destroyers, but the white trim and red stripes help add a little color. I really dig the way they sculpted her long blonde hair fanning out around her. She also appears to be the most cheery of the three Torpedo girls.

And speaking of torpedoes, Yuudachi sports two 61cm quadruple torpedo mounts, fitted out with oxygen powered payload. As for her hand weapon, I believe this is the 10cm twin high-angle gun mount. The way she holds it across her chest makes her look like she’s the most ready for action of the three. Her backpack is the simplest of the three, with just the one stack and the mast. It’s very cool that the girls each have unique masts.

The paint on all three figures is good, although not as crisp and clean as one might expect from the pricier figures. For example, there are a few stray spots of white on Fubuki’s right sleeve. With that having been said, there’s nothing else that stands out as bad at all. In fact, there’s even some lovely little touches like the tiny anchors on Fubuki’s socks, the deco pattern on Mutsuki’s stockings, or the fine striping on Yuudachi’s collar and sleeves and on Mutsuki’s skirt. The three Fleet Girls all come with the same style base. It’s a simple pentagon shape cast in translucent blue, which is appropriately suggestive of the water. The figures peg into the base with satisfying clicks, which holds them perfectly.

I can’t say enough good things about these figures, particularly when you bring the pricing into the mix. When they arrived, and I first saw the size of these figures in the boxes and equated that with the average price of $20 each, I was afraid the quality wouldn’t be there to back up full-sized figures. Remarkably, these gals pull it off quite nicely making these possibly the best values I’ve ever picked up in my somewhat modest years of Japanese figure collecting. SEGA also did two of the Carriers in this line, Kaga and Akagi and I’ll certainly be getting to those in the near future.