As promised, I’m back with the second half of a Transformers Thursday double-feature. Hopefully this helps to make up for the lack of contend lately. Tonight I’m checking out Ratchet from the TF: Animated line, a Deluxe sized figure that I’ve had for a while, but never found his way into the spotlight. I’ve got no packaged shot, so I’m going to dive right in to check out his alt mode. 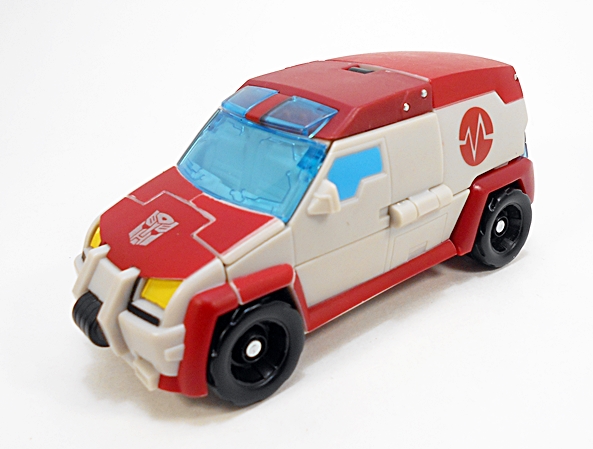 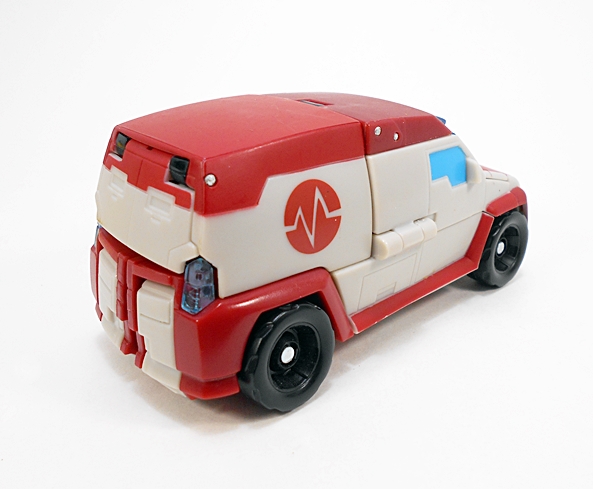 And I am not really digging it all that much, and for a number of reasons, but mostly because it’s rather f’ugly. The off-white, almost gray, plastic does nothing for me and even when coupled with the burgundy, I’m just not a fan of this deco. The paint is pretty rough too, with some sloppy lines and it’s a shade or two off from matching the colored plastic that it’s supposed to. There’s also some annoying scratches on the roof, which is yet another example of some of the poor QC that reared it’s ugly head on several of my figures from this line. Toss in a lot of ugly seaming, and those big hinges on the sides, and there’s just not a lot to love here. 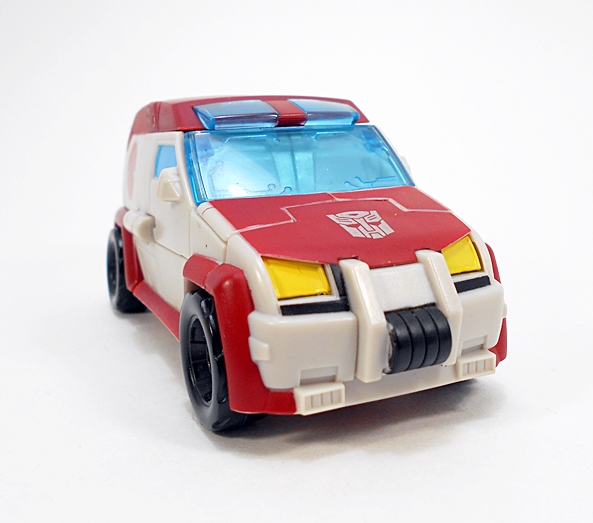 The translucent blue plastic used for the windshield, lightbar, and rear lights is nice. The Autobot emblem printed on the hood is cool. At least Hasbro slapped some yellow paint apps on the headlamps, those are all pluses. But then you get some more really sloppy paint on what I assume is supposed to be a tow winch on the front, and the painted blue windows on the side doors is another turn off for me. Ratchet’s alt mode is also pretty small, especially if you park him next to Bumblebee. Let’s see if the robot mode can save this figure… 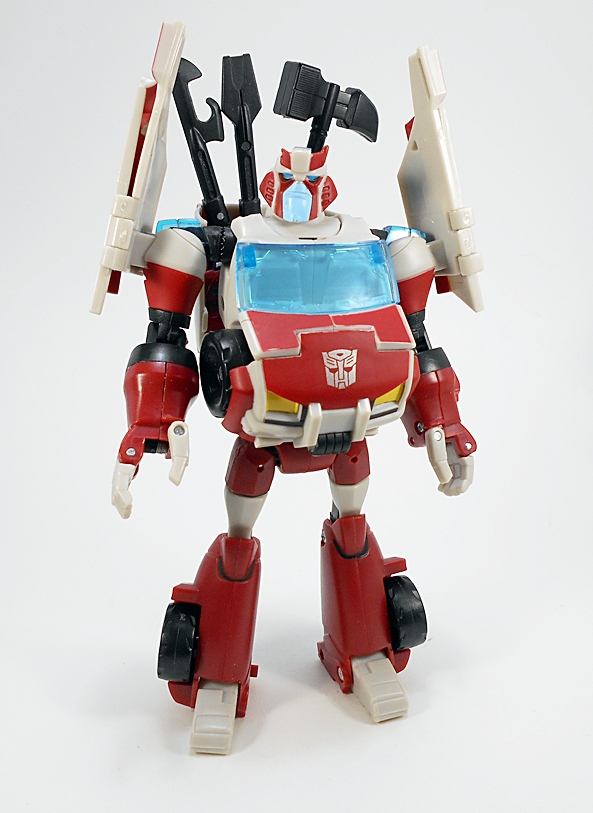 OK, not bad. I definitely like the way the front of the vehicle forms the chest. G1 Skids would approve! The proportions aren’t bad, and I love the he forms a backpack that can hold his tools. The only thing I’m not fond of here are the huge panels jutting up off his shoulders. A couple of simple swivels would have been nice to swing these down and make them look less cumbersome. They weren’t nearly that bad in the animated model. 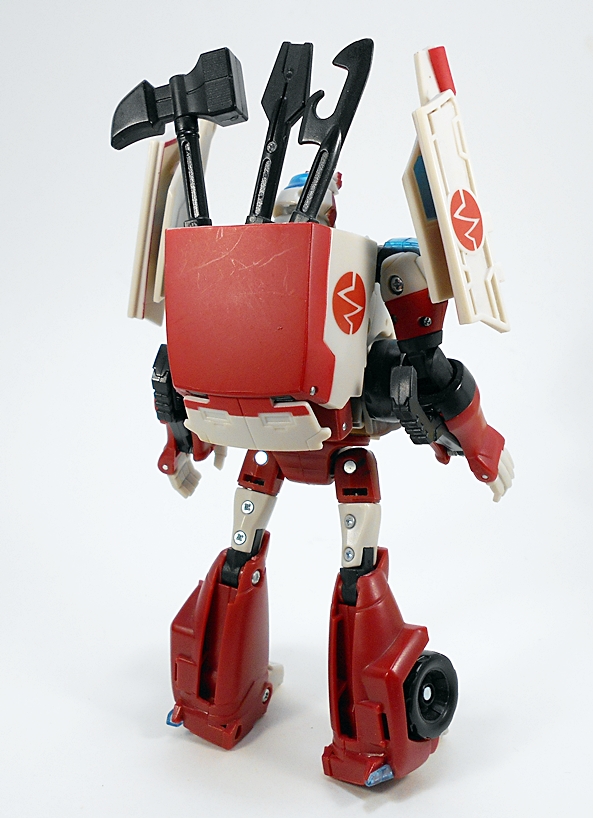 The coloring doesn’t bother me as much here either, probably because we get a lot more of that burgundy paint and plastic. Although, you can still get a good look at all that scratching on his backpack. It’s disappointing that he came right out of the package like that. 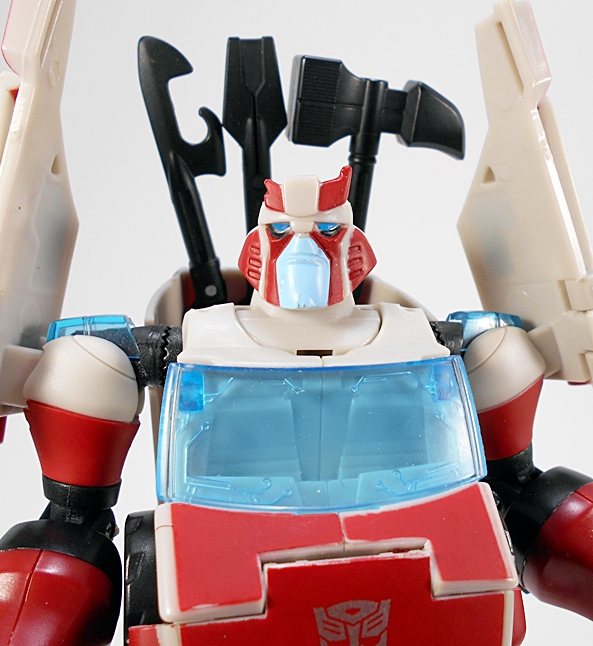 The head sculpt is solid and a good representation of his cartoon counterpart. I like that they kept the one cracked horn. He looks appropriately grumpy too. 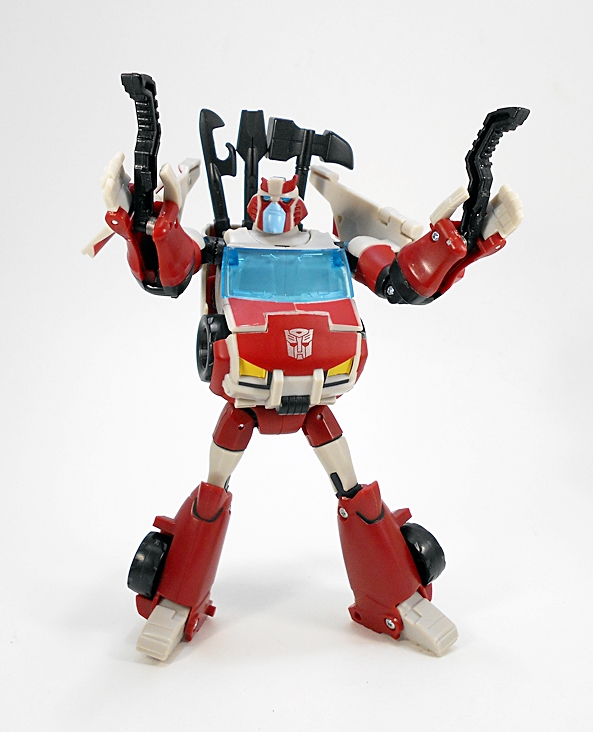 Ratchet has a few accessories and play gimmicks. Firstly, he has these fold-out implements in his arms. I can’t remember whether these were weapons or tools, but I suppose they could be used for either. They’d probably come in handy for rock climbing too. 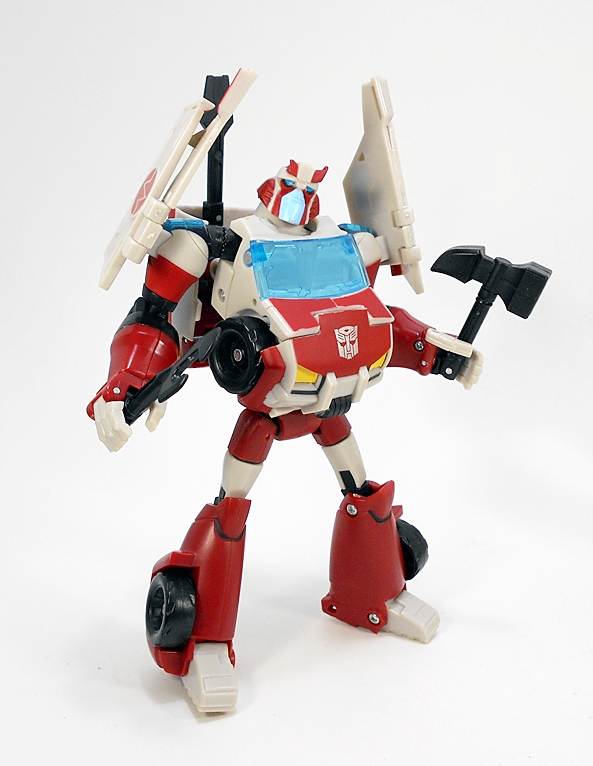 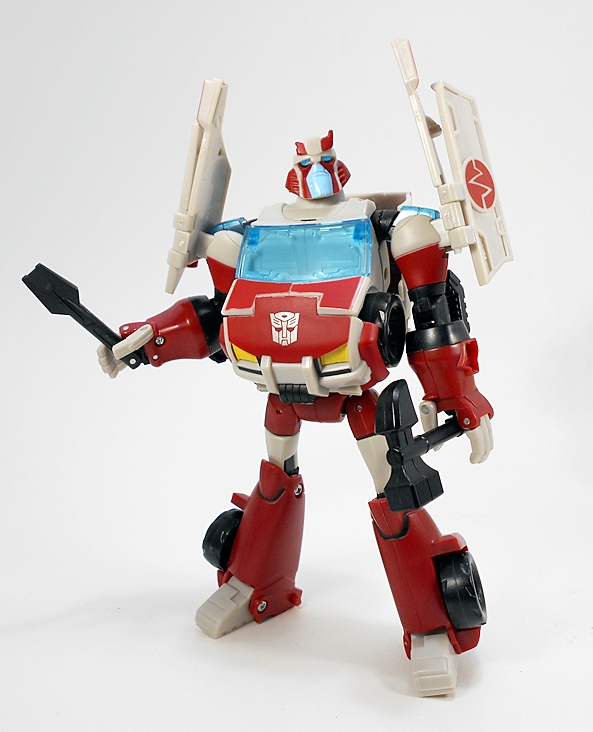 And you also get a bunch of tools, which clip into his backpack, and which can be clipped into his hands as well. These are a really cool idea and give the figure a lot of added personality. 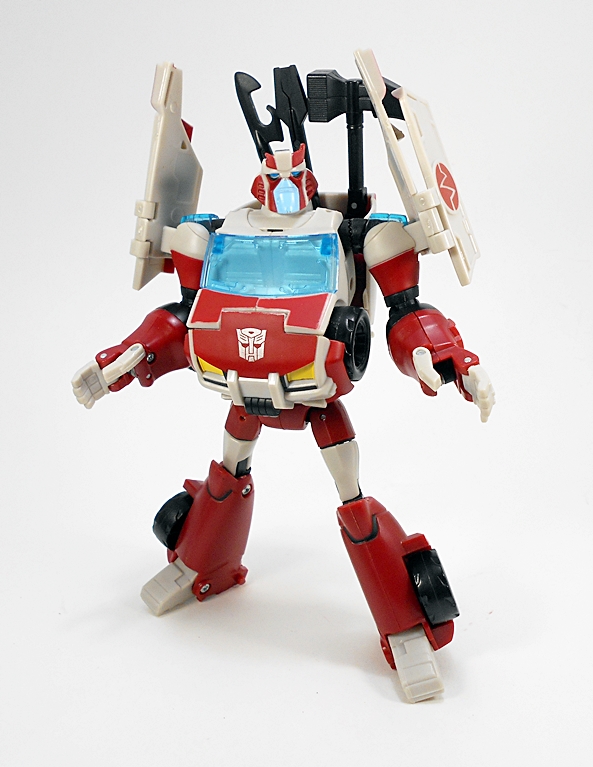 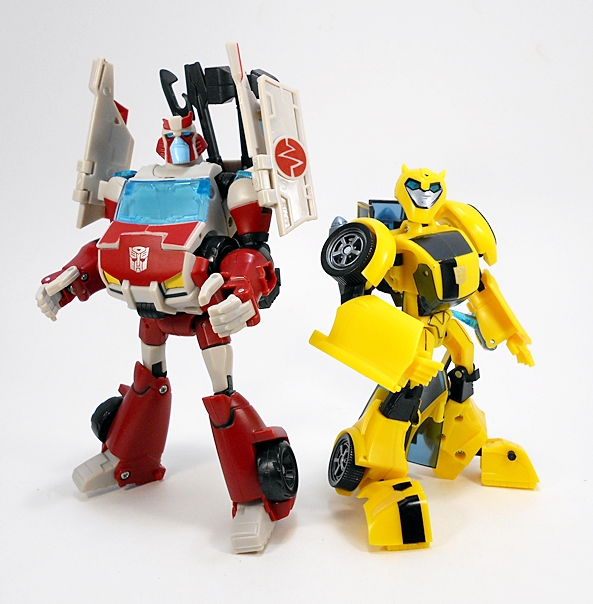 Yeah, Animated Ratchet is a mixed bag. His alt mode is disappointing on a number of levels, but I think the robot mode is more than enough to redeem him, at least in my eyes. He’s fun and he looks great alongside the rest of the Autobots. If you haven’t checked out my other Transformers: Animated features, I have finished re-shooting all of them. Unfortunately, while I set out on this endeavor with the hopes that I would feel comfortable unloading my TF: Animated collection to make some room and generate some cash for other figures on my want list, things didn’t go as planned. Not only have I decided to keep these toys, I now feel a burning need to pick up some of the others I’m missing. So don’t be surprised if we see more of these guys popping up on Transformers Thursdays in the near future.