Yup, Anime Saturday may stray now and then, but it’s going to keep coming back to Kantai Collection quite a bit for the foreseeable future. I’ve gone on before about how enamored I am with Taito’s line of Prize Figures and today I’m looking at another one of their KanColle releases, this time with Repair Ship Akashi, a character from the video game rather than the anime series. 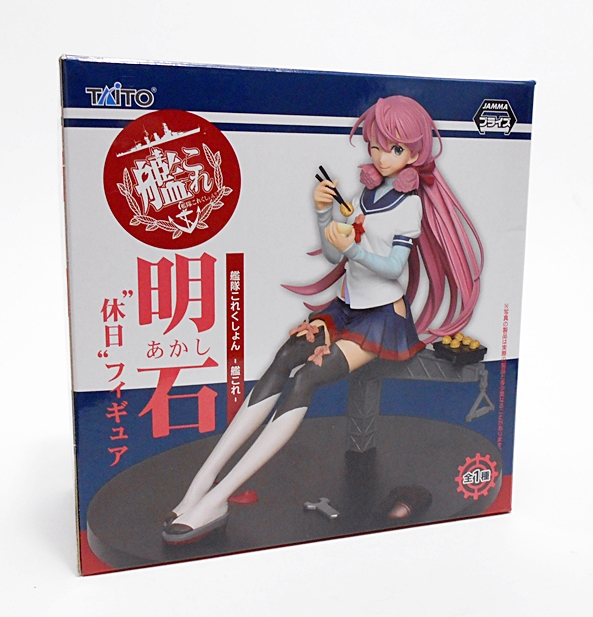 Boy, do I love these packages. Simple, attractive, enclosed boxes. There’s no windows to scratch or dent and the boxes are made of pretty heavy stock so they will actually protect the figure if you need to pack them up. There’s hardly any English on the package, but I know who I’m buying, so I actually prefer it that way. It adds to the charm of the import. Inside, the figure comes wrapped in plastic and this one requires just a little bit of assembly as well as the placement of some accessories. 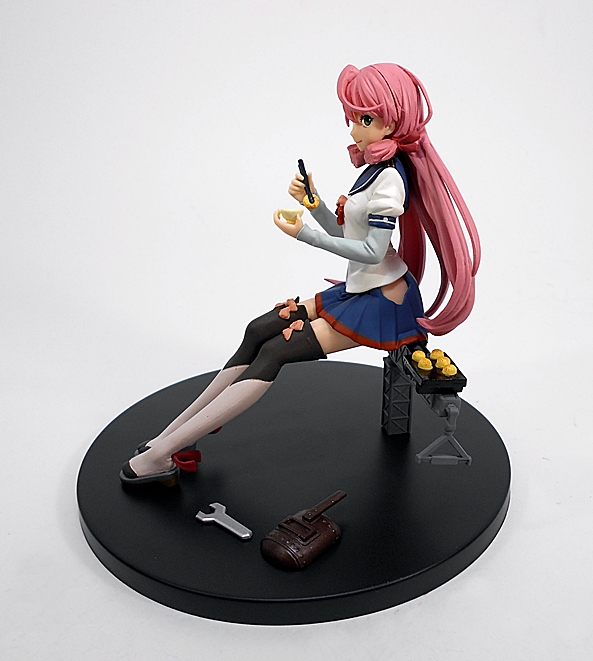 It’s Akashi’s Day Off, so she’s taking some time out from repairing and upgrading her fellow ship sisters and just chilling out a bit. She’s seated on a bit of repair gantry, which pegs into the base. Her feet also peg into the base and between the two she’s quite stable. While she only measures about 5-inches and change, she is reclining and that puts her in scale with Taito’s other KanColle Prize Figures. She’s winking at you while enjoying a tray of dumplings, with her equipment strewn on the floor beside her.

Akashi is wearing the typical sailor-inspired school uniform, which includes a white blouse with blue collar and cuffs, along with a pleated blue skirt with red trim. She also has white and black thigh-high stockings with pink bows at the top. The sculpting here is very well done, particularly the ruffles in her blouse and the pleating on the skirt. The paint is also a solid effort. If I get in close enough, I can see a little bit of spray or inconsistencies, but for a piece in this price range, I’m very happy with the quality. 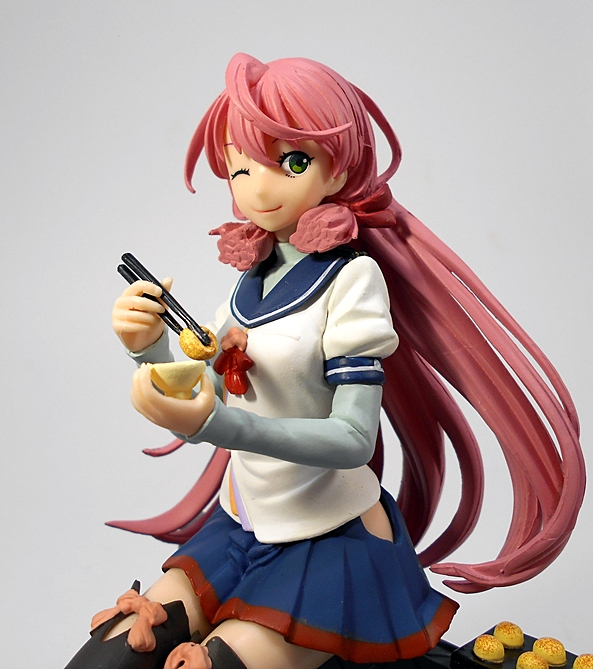 The portrait is very charming, thanks in part to her wink and beaming smile. Her one open eye is beautifully printed with a fetching shade of green. Her pink hair is tied into two bunches in the front with red ribbon and cascades out the back and fans out around her. There’s some really nice work on the bangs. The general wildness of the hair adds just the right amount of energy and excitement to a statue that is otherwise very relaxed in its composition. I will say that the skin tones on this piece are a little bit on the waxy side, but considering that she isn’t showing a lot of skin, it doesn’t really detract from the figure too much. 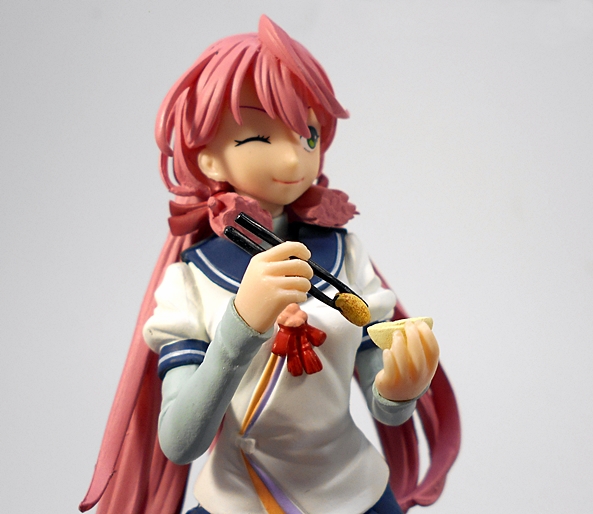 Akashi holds a small bowl of dipping sauce in her left hand and is holding a dumpling in chopsticks in her right hand. Damn, now I want to go drive around the block and get an order of steamed dumplings.

The figure comes with three loose accessories, and by loose I mean they don’t attach anywhere, so you can place them wherever you want. The first is the tray of dumplings, which in the box art is just sitting on the gantry beside her. A peg or something to secure it would have been helpful, but I’ve found as long as I don’t bump the shelf, it will stay put.

You also get a wrench and welding mask, which can just be placed anywhere on the base. The base is a simple, black base, although it is rather large to accommodate Akashi’s outstretched legs. She takes up a fair amount of real estate on the shelf, but that’s usually the case when the figure is orientated in this fashion. 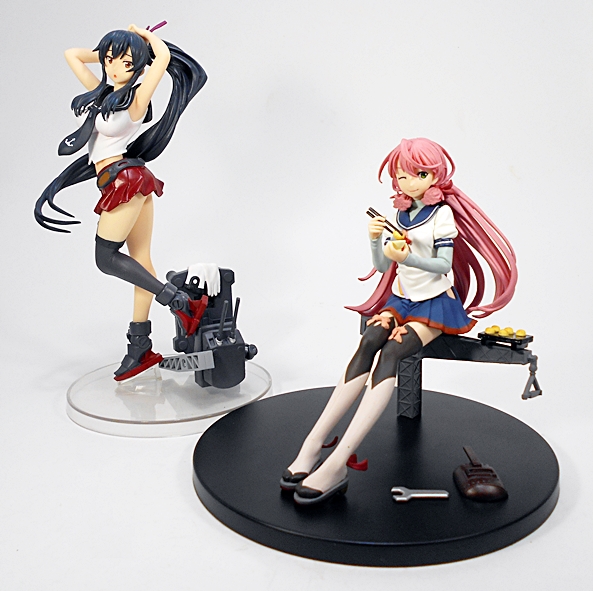 Akashi set me back a whopping $16 shipped, which I think is a fantastic value for an import of this quality. She displays very nicely beside Taito’s Light Cruiser Yahagi. And while I’m not nearly as familiar with the characters that didn’t appear in the anime series, I really like the idea of having a Repair Ship in my KanColle display to offer a little variety among all the Destroyers, Carriers, and Battleships. In fact, I’m kind of bummed now that she wasn’t included in the anime. I think she would have been a good addition to the cast of characters.