In the past five weeks of Mythic Legions Wednesdays I’ve delved into the Skeletons, Knights, Orcs, and Dwarves, but today I’m checking out one of the figures that doesn’t fit into any of the more conventional classifications. His name is Vitus and he is a lone warrior, the last survivor of his people, and an overall scourge of all evil! 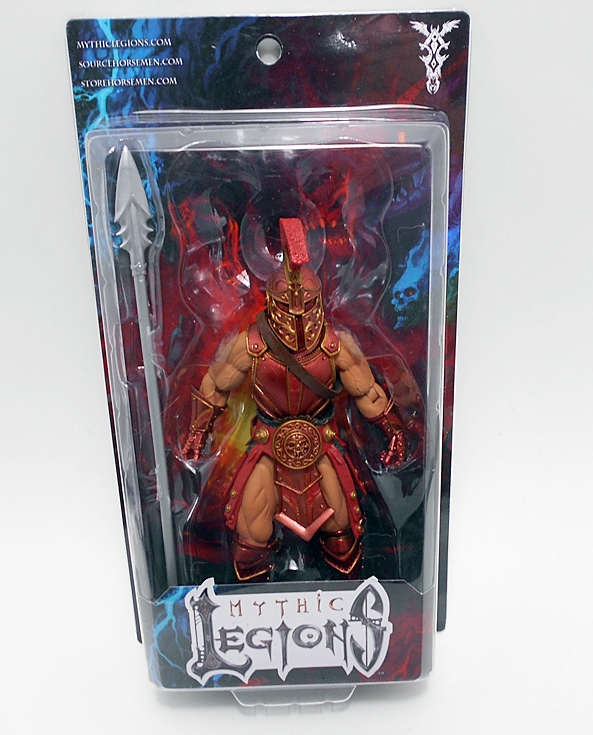 Here’s a quick obligatory in-package shot. Once again, they are collector friendly, but I still haven’t decided if I’m keeping the cards and bubbles. Space is always a concern and I may just wind up saving the inserts with the names and bios.

Vitus is obviously themed off a Spartan warrior and he’s one of the best examples so far of how clever T4H are on the reuse of parts. Vitus uses the lower legs, boots, and gauntlets we saw on Sir Gideon and Gorgo. the torso and groin armor from Gorgo, the upper arms, upper legs, and belt from Urkku. This figure should look like a cobbled together mess, but this combination of parts and all new paint makes him look like a unique design that was build from scratch from the ground up.

New paint features smooth and even flesh tones on the arms and legs and a rather striking combination of metallic red and gold for the armor. The intricately sculpted belt, which looked old and tribal on Urkku looks flashy and ornamental on Vitus. The new deco just transforms it into something new. It’s amazing! It’s also worth noting that Vitus is the only figure I’ve looked at so far that does not include shoulder pieces, although the sockets are still there if you want to borrow someone else’s for him. 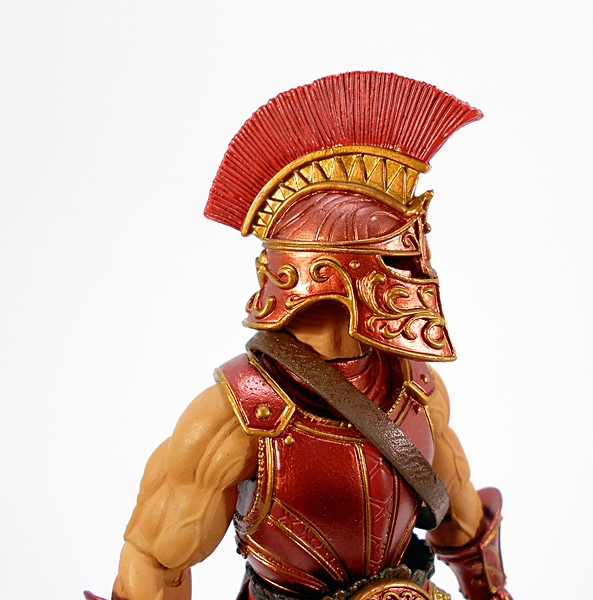 Vitus’ head sculpt features an intricately sculpted Greek-style helmet with a high crest comb. There’s some lovely raised scrollwork and all the details are painted gold against the metallic red backdrop. 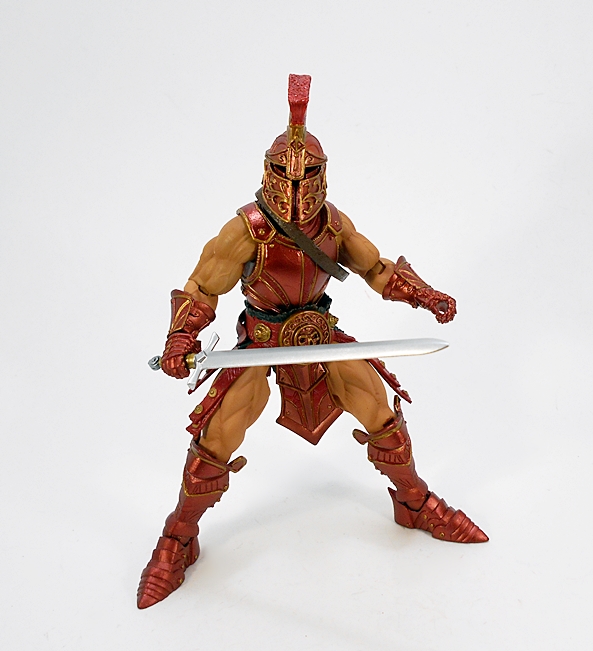 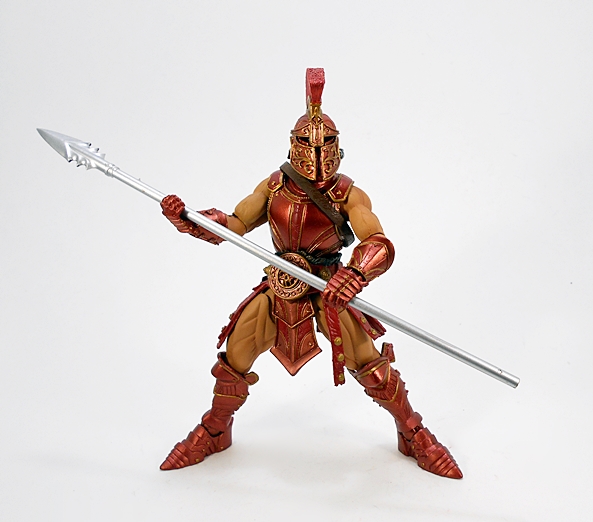 The modular nature of Mythic Legions means the figures feature identical articulation straight across the board. Vitus features rotating hinges in the shoulders, elbows, wrists, hips, knees, and ankles, as well as lateral rockers in the ankles. There are also ball joints in the waist and neck. Seven figures in and I have not had any issues with stuck or funky joints. These guys are rock solid and oh, so fun to pose.

Vitus comes with the sword we last saw with Sir Gideon. This time it features a simple gold painted grip. You also get the brown belt we’ve seen with almost all the figures thus far. Since Vitus lacks the shoulder pieces, I like to use it as a shoulder strap and have him wear his sword behind his back. I also discovered that the belt has a loop so he can wear the sword on his right hip. This was present in Urkku too, as it’s the same belt, but I didn’t notice it back then. There’s always a sense of discovery around these figures, which is pretty exciting. 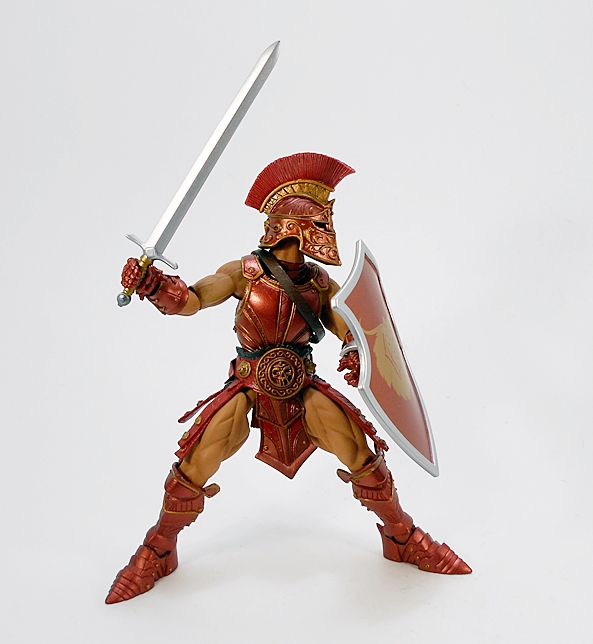 The shield is the same mold we’ve seen with almost all the figures so far, but with a new crest painted on the face. It’s a gold lion motif against a metallic red background to match the coloring of his armor. Once again, the arm clip pegs into the shield, which means you can orientate it any way you want no matter what position the arm is in. 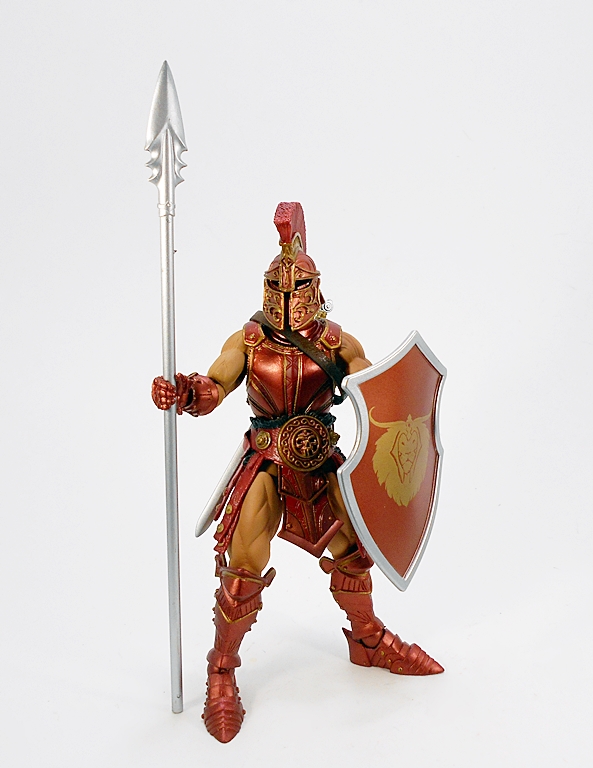 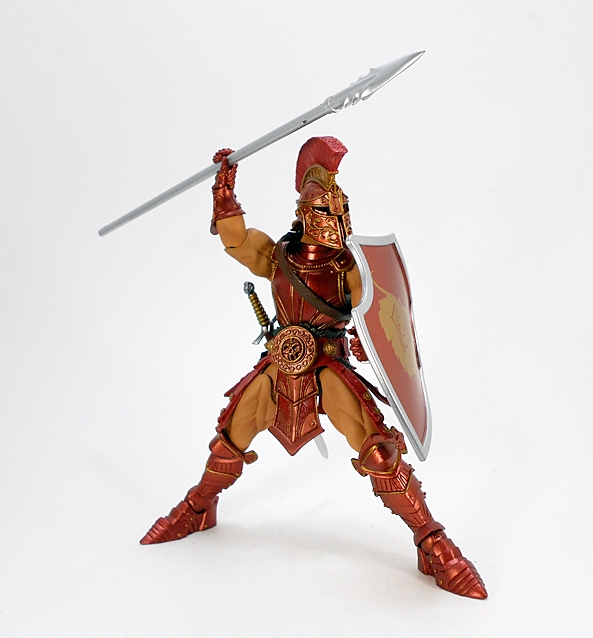 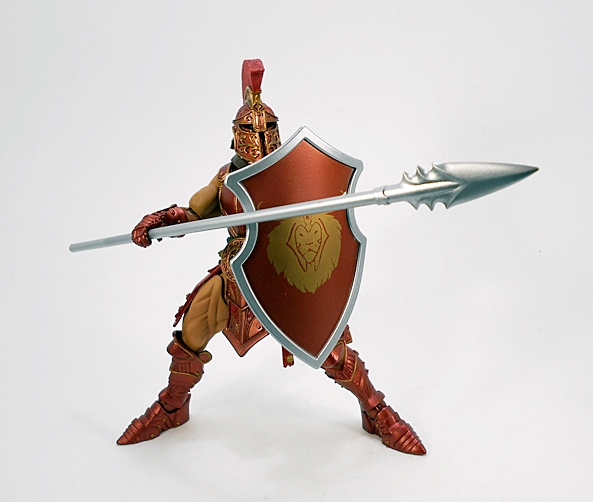 Finally, Vitus comes with a spear that definitely suits his hoplite theme. The spears remain my only quibble with this line. Some paint on the shaft would have been nice.

Vitus is not only a gorgeous figure, but he’s a shining example of how well thought out and successful the parts sharing in this line is. Nothing about him looks out of place and I’d be hard pressed to tell you which parts were intended for him and which were borrowed from another design. I also like how T4H have worked some more unique designs into the line by producing characters that don’t fall into the knights, orcs, skeleton, dwarf demographic. Next time, we’ll check out another somewhat unique character in this initial line based off The Minotaur!

2 comments on “Mythic Legions: Vitus by The Four Horsemen”