It was three years ago that I Featured Big Chief’s Eleventh Doctor Sixth-Scale figure here on FFZ. It was a somewhat expensive gamble on an untested company, but ultimately it paid off. While the tailoring on the outfit wasn’t quite up to Hot Toys’ level, the likeness was excellent and I wound up with a solid figure at a good, but admittedly deep-discounted, price. Jump into the TARDIS and travel three years into the future, or now as we like to call it, and I find history repeating itself. This time, I was able to pick up The Twelfth Doctor at a decent price and everything I said about Eleven pretty much applies here.

There can be no denying that Big Chief has the presentation down pat. You’re paying for a high end collectible, and everything about this package sells it. At first glance, the package appears to be a simple blue shoe box style affair illustrated with the gears from the 8th/9th Season openers, the Doctor Who logo in the center, and “Twelfth Doctor” down in the bottom right hand corner.

The back of the box shows off the figure against the backdrop of the TARDIS console room and you get a blurb introducing The 12th Doctor and how he got his new set of regenerations. On closer inspection it turns out that the front and side panels are actually a tri-fold wrap-around that’s held on by magnets. When you remove it…

You reveal a window showing off the figure and a heavy cardboard stock backdrop of the TARDIS interior to display the figure in front of. I absolutely love this idea! The layout of the interior of the box should be familiar to anyone collecting Sixth-Scale figures these days. You get two trays. The top has the figure resting in a molded plastic cradle with his accessories and extra hands around him. The lower tray consists of the figure stand and, in my case, an empty space where the miniaturized TARDIS from “Flatline” would be. There’s some confusion over this accessory. It wasn’t advertised as part of the initial promo pitch, it’s definitely been bundled in some of the Con Exclusive releases of this figure, but apparently not all of them. It’s odd, because as the box proclaims, this is a Limited Edition figure and at only 1,000 of the regular release produced, it seems like they could have included that accessory in with all of them. Well, let’s get out The Good Doctor and see what he’s all about…

First up, let’s talk wardrobe. Throughout the 8th and 9th Series, Twelve has been all over the place with his costumes. He’s gone from finery that would have made The Third Doctor jealous to slumming it with a hoodie that even Nine probably wouldn’t have worn. Happily, Big Chief decided to go with the outfit that Peter Capaldi wore in the first official images of him as The Doctor. It features his gorgeous navy blue coat with red liner, a navy sweater, a white button down shirt, black trousers, and shiny black boots. Straightaway, something here felt off, and I quickly identified it as the sweater. He wore it initially, but not enough that I associate him with it. It’s definitely the weakest part of this outfit and it’s hard to get it to sit right on the figure, especially when articulating the arms a lot. Also, it made the jacket feel way too snug and restrictive in the upper body and shoulders. That sweater has to go!

Much better! The button down shirt here is a huge improvement over the one on the 11th Doctor figure. It’s made of lighter material and not nearly as puffy, but the collar still has a habit of popping up and I’m considering pinning it down, as I think it will make a huge difference. The shirt features nice stitching, tiny buttons, and even french cut sleeves. The belt makes the waist look a bit too small, but then Capaldi is a pretty thin guy, and the jacket conceals most of that issue.

The stitching on the jacket is splendidly done and includes the buttons on the sleeves. The inner lining is also gorgeous. You even get a breast pocket for you know what! There’s a magnet placed inside the jacket if you want to display him with it closed.

The Capaldi portrait here is quite good. After several different Doctors, I’ve found Big Chief to be a little hit and miss with their likenesses. I’d rank the Matt Smith sculpt and this one as their best. The Tennant, Eccleston, and Tom Baker likenesses are close, but a little off. And I’m at odds with their William Hartnell likeness. In this case, I think the actual sculpt is spot on and they’ve made a valiant effort at painting that eerie spark of life into the eyes. The skin tone is good, but it’s the paint that keeps this from rising to the ranks of the top tier Sixth-Scale competitors. Still, not bad at all.

As for the body itself, it feels very similar to the Matt Smith body. The joints are looser than Hot Toys and more on par with Sideshow, however they are capable of holding any pose I put him in and supporting the weight of the figure. The generic stand I’m using is entirely for balance issues. Happily, the outfit is not at all restrictive, making The Doctor a lot more fun to play around with than most of the other Sixth-Scale figures in my collection. Of course, you also get a bunch of hands, which include: Relaxed hands, fists, accessory holding hands, and the right hand to mimic that wonderful pose in that instantly iconic initial press photo, which introduced Capaldi to us as The Twelfth Doctor. The hands use a peg system practically identical to Hot Toys and Sideshow and they are very easy to swap in and out. You get plenty of extra pegs too, but I can’t see ever breaking one of these.

Big Chief has been great about including a lot of nifty accessories with these figures. And as before, none of these are mind blowing, but they are good selections and lots of fun. First and foremost are a pair of Sonic Screwdrivers, one with the tip open and one closed. These are essentially the same pieces that came with The Eleventh Doctor. As already shown, there’s a pocket in the jacket to slip it into and the hand designed to hold it works perfectly.

Next up, is The Doctor’s yo-yo, which he uses as a super high-tech instrument for measuring gravity. 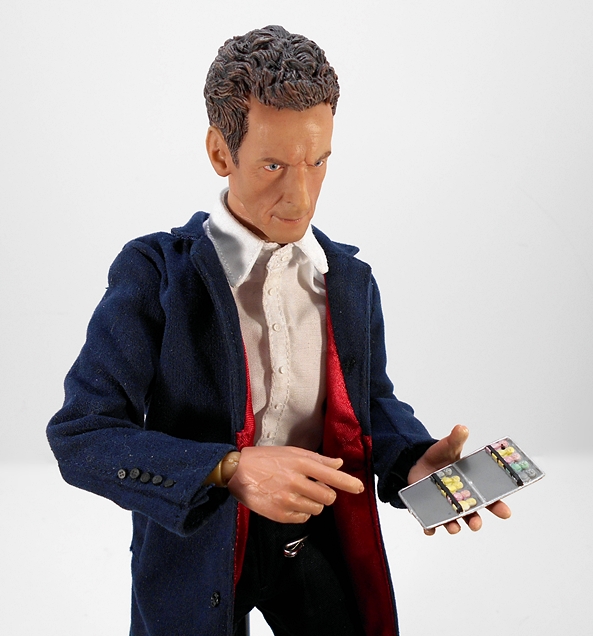 Jelly Baby, anyone? Yes, you get the posh little cigarette case that The Doctor used to store his favorite sweets in “Mummy on the Orient Express.” It’s a static piece, sculpted in the open position with individually painted Jelly Babies inside. I love that they included it as an accessory, especially since it was used as basically a one-off gag and never seen again.

The Psychic Paper! Easily my favorite addition to The Doctor’s arsenal since the show returned in 2005. Yes, this is essentially the same accessory included with The 11th Doctor figure.

Moving on, we have a gloved hand and spoon! This pair of extras were inspired by that episode that I adore and everyone loves to hate on, “Robots of Sherwood.” The premise was ridiculous, the resolution was dumb, but it was such a fun ride and Capaldi’s sheer annoyance with Robin Hood was absolutely fantastic. Also, that whole dungeon scene ranks up pretty high on my list of favorite Doctor Who moments. I love that they included these, because again they are pretty much one-offs.

And, finally… it’s The TARDIS in Siege Mode from “Flatline.” This is a really nicely sculpted accessory, but also one that I can’t get terribly excited about because, a) The Doctor was inside The TARDIS at the time, so having it as an accessory to interact with the figure is a little odd. b) It looks way too much like a miniaturized version of The Pandorica. 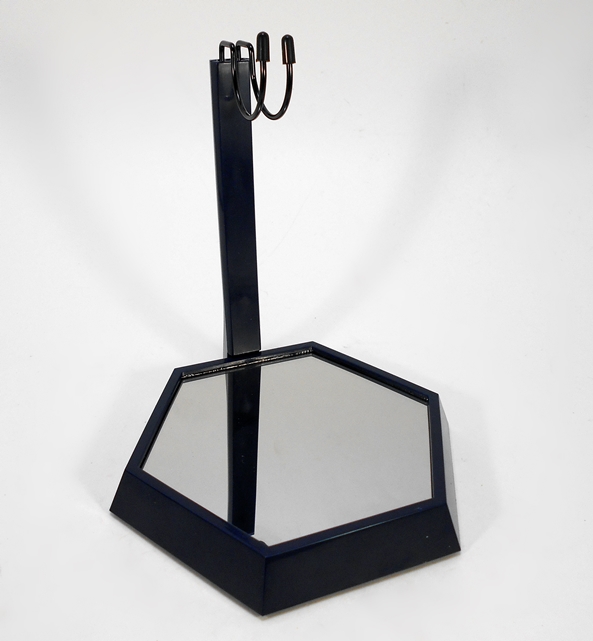 Before wrapping up, we have to talk about the stand. Oh, God, the stand! It’s so hard to imagine that Big Chief put so much work into something like this and screwed up the basic premise of its functionality. You all may remember that I was less than pleased with the stand that came with The Eleventh Doctor, but that piece is like an engineering marvel when it comes to this one. The base is a mirror and there’s a light up feature that illuminates some Gallifreyan writing, which is a really neat effect, but one that I couldn’t really capture in a picture. Unfortunately, the post that’s designed to support the figure does not attach securely to the base, so when you put the figure on it, the post immediately pushes away and falls off. This is a relatively easy fix, by gluing the post to the base, but then it’s never going back in the box again. I have yet to decide whether I’m going to do that. For now, I’m making use of the inexpensive and generic figure stand that you’ve seen throughout these pictures. 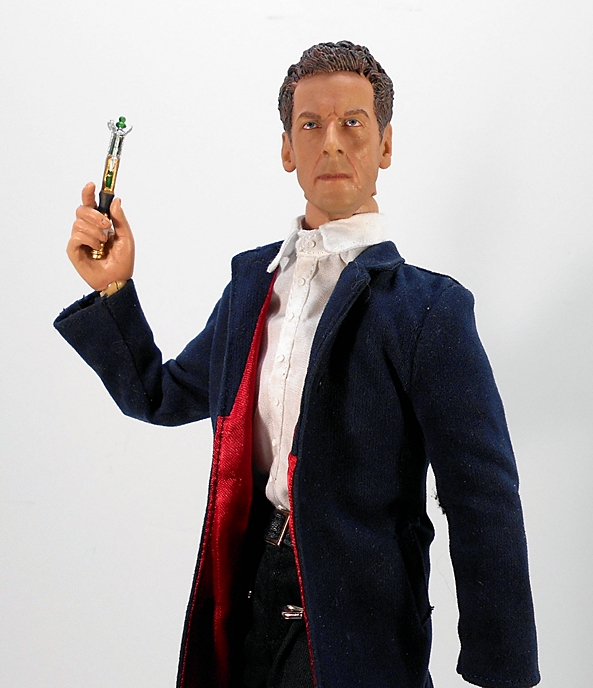 I love this figure and it makes for a wonderful display next to my Big Chief Eleven. But in the end, so much of collecting comes down to money and Big Chief has been asking a lot for these figures. Twelve debuted at $239, which is even higher than many of Hot Toys’ standard releases these days. Of course, Big Chief’s figures are a lot more limited, and as popular as Doctor Who has become, it’s safe to say these figures are more niche than the box office juggernauts of Marvel and Star Wars. But even with that being the case, my satisfaction with their Eleventh Doctor figure coupled with my unending reservoir of adoration for Peter Capaldi as Twelve couldn’t get me to pull the trigger at $239. As good as these are, they’re not comparable to the insane level of craftsmanship that goes into a figure at the Hot Toys price point. That’s nothing to be ashamed of, Big Chief, as few figures can compare, but if you’re going to market a product at the same price, you really should be offering the same level of excellence. These are on the right track, but they aren’t there yet. Ultimately, I found Twelve for $150 shipped, and that was the number that made me take the plunge and I feel it was worth it. I’m still in a holding pattern on some of the others, but if any of those hit that magic number, then Big Chief’s Sixth-Scale Doctor Who may return!

4 comments on “Doctor Who: The 12th Doctor Sixth-Scale Figure by Big Chief”