As many of you know by now, Cover Girls is a line that I love to collect, but it often has to take a backseat to other priorities. It’s a gamble, because sometimes they get discounted and other times they sell quickly and skyrocket in price. Getting backlogged on this line can be a scary prospect. Most recently, I was torn between picking up Vixen or the second version of Catwoman next, but then I figured I already have the first Catwoman release, so why not expand the family? And besides, Vixen is awesome.

It’s been a few months since I last visited with this line. The boxes haven’t changed. They’re simple, and collector friendly, and they show a number of shots of the collectible inside. The back of the box has images for Starfire and a new version of Harley Quinn. Vixen has been getting a little love in the DCTV media lately, with both animated and live action appearances. And seeing as how DC Collectibles is already producing second versions of some of the A-Listers in this line, it’s nice to see that they aren’t completely ignoring some of the B-Listers. No offense, Mari. Anyway, getting Vixen set up is easy, you just peg her into the base and she’s good to go, so let’s do that and check her out!

Grrr, baby… Grrrrr! If you’re a newcomer to this line, these ladies tend to be approximately 9 to 10″ in scale. Vixen stands with legs apart and her arms held out, as if she’s ready to pounce right off her base. The Cover Girls line has offered a reasonable compromise between action and museum style composition, and I think Vixen is another good example of that. In this case, what we get really captures the character nicely. This is just such a simple and elegant pose. 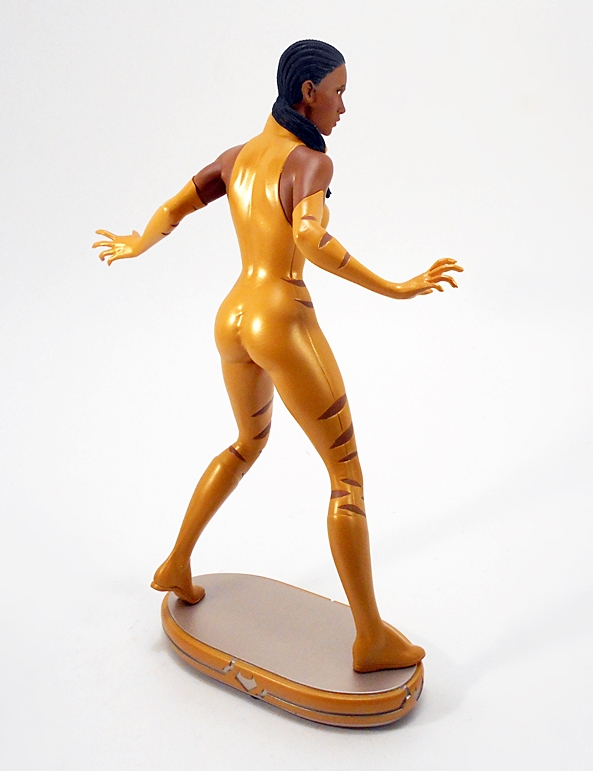 Vixen sports her rather simple body suit with sculpted cut-outs to resemble animal stripes, and long sleek gloves. You also get some sculpted seams, boot lines, and whatever that strategically placed silver fixture is right above her you-know-where. The paint on the costume is almost entirely… ochre? Is that what you’d call that? Yeah, let’s go with ochre… with a hint of metallic sheen to it. There’s also a low plunging neckline for those of you who like a little sumthin-sumthin with your lady statues.

The portrait here is among my favorites that this line has done in its current series. Mari’s got a beautiful face with a stern expression that shows she means business. The skin tone is warm and soft and the paint lines around her tribal necklace are pretty nice and sharp. In fact, all the paint on her facial features are equally sharp and precise. I especially like her yellow eyes and the sheen on her lipstick. There’s a little spray around her hairline, but I’m thinking that is intentional. Speaking of the hair, it’s sculpted beautifullly, and I dig the way it trails down around her high collar and over her right shoulder. 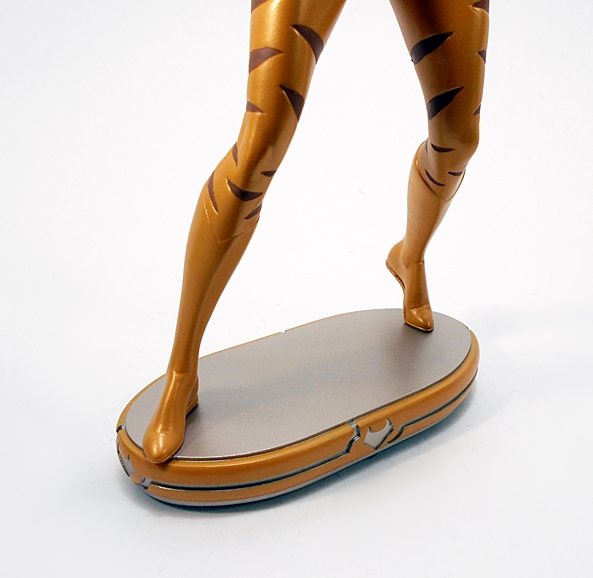 This line continues to use simple and standardized oval bases, in this case personalized with an animal head cut out at the cardinal points. It features a silver top and stripe and the edges are painted to match her costume. The limitation is hand numbered on the bottom of the base. Mine is 874 of 5,200.

As beautiful a piece as this is, I’m guessing that Vixen isn’t selling all that well, because she’s available everywhere and at pretty deep discounts. That’s a shame for two reasons. One, at this price point, you’re getting a stunning statue of a great character. Two, a lot of people complain that these lines stick to the safe A-listers, which brings me back to my earlier point. Doing lesser known characters is a gamble for these companies and if it doesn’t pay off, they won’t keep doing it. And honestly, Vixen isn’t exactly obscure. It’s something to keep in mind when we’re seeing the second versions of Catwoman, Harley Quinn, and Wonder Woman, and still haven’t seen a Zatanna, Jessica Cruz, Fire, Ice, Stargirl, Star Sapphire… I could go on and on…

2 comments on “Cover Girls of the DC Universe: Vixen by DC Collectibles”