Marvel Legends continues to crank out bucket loads of 6-inch scale plastic comic book heroes and villains, making me a very happy and broke Marvel fan. But what really amazes me about this line these days is its willingness to take risks. Hasbro has not only been dipping into obscurity fairly often, they’re not afraid to confuse the hell out of moms, dads, and casual collectors alike. Case in point… in a wave that is more or less dedicated to the Marvel Cinematic take on Civil War, we get a very classic comic version of Nick Fury.

The package is everything we’ve already seen before, so I’m not going to dwell on it for too long. The window box features some nice blue-tinted character art on the side panels and is sort of branded for the Civil War film. Well, it says Captain America on the front. Regardless, when little Timmy says he wants a Nick Fury figure and mom or dad goes to the store and finds a box that says Nick Fury and Captain America, little Timmy may be vexed that he’s not getting a Samuel Jackson. That’s probably why I only ever see middle aged dudes searching the Marvel Legends pegs these days. And that’s a beautiful thing. And yes, I do realize that in this day and age a good chunk of those moms and dads may also be Marvel Comics fans, but I think my point is still at least somewhat valid. Where the hell was I? Oh yeah… Nick Fury! 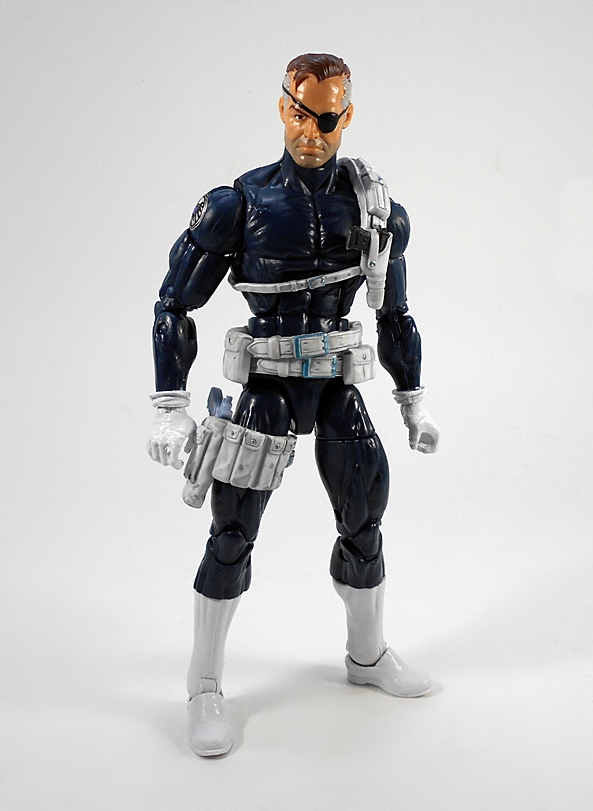 Oh, hell and yes! This is the Fury that I grew up with and has been and still is the very definition of badass. Nothing against Jackson, I think he does a great job in the role, but I wish they had kept a little more of this classic uniform for the MCU rather than go for the tired and cliched black trench coat thing. Here, Fury features a dark blue buck with white boots and gloves and the SHIELD emblems printed in silver and blue on his shoulders. He’s also loaded with belts and pouches! These pieces include a rig on his right thigh, which includes a functional holster, two belts on his waist, and a shoulder rig with a holster that contains a gun sculpted into it. The white on the boots and gloves is both clean and bright, with no bleeding like we usually see on figures with white over dark bucks. The rest of his white gear features a nice paint wash to pick out all the sculpted details. 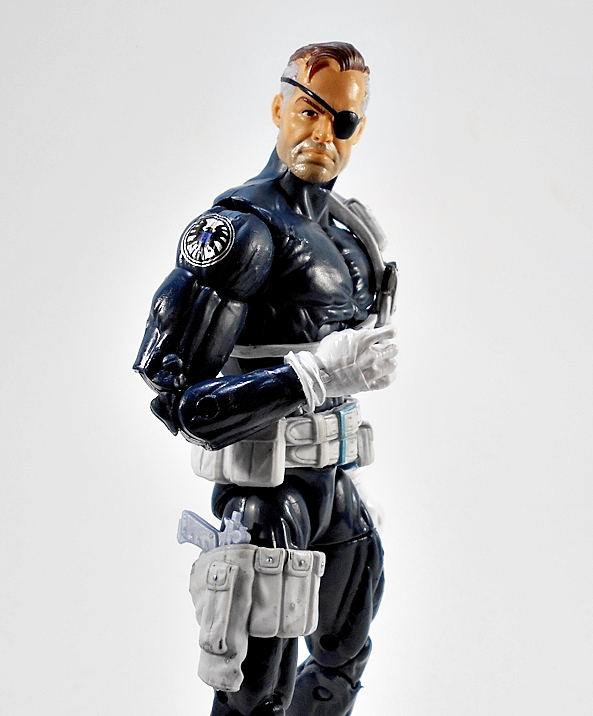 The standard portrait here is a almost a home-run. It’s iconic Nick Fury with his graying hair, five-o’clock shadow, and eye patch. The sculpt is top notch, while the paint has just one issue. They left the area under the hairline unpainted and when you’re looking up at the figure from below, it looks kind of weird. Everything else is great. 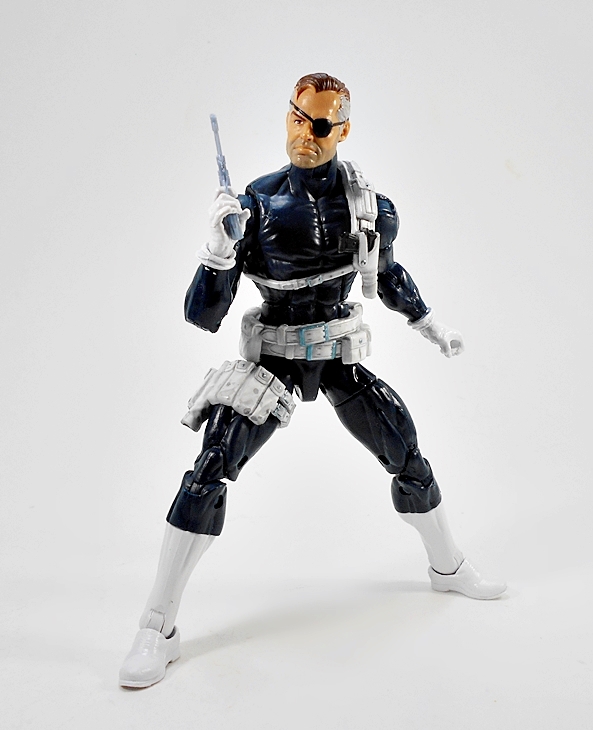 The figure features plenty of articulation, but I’m sorry to say that some of the joints here are a bit loose, floppy, and or gummy. The arms feature rotating hinges in the shoulders and wrists, double hinges in the elbows, and swivels in the biceps. The legs are ball jointed at the hips, have double hinges in the knees, and swivels in both the thighs and the tops of the boots. The ankles are hinged and have lateral rockers. There’s a swivel in the waist, an ab crunch hinge in the torso, and the neck is both hinged and ball jointed. So, where are the issues. The neck is extremely loose and the hinges in the knees and elbows are gummy. The ab crunch also has a little too much play in it for my liking.

Fury comes with a gray pistol that appropriately looks like a cross between a Luger and a laser pistol. It fits nicely into his thigh holster. A rifle would have been nice, but I could pretty much complain that any figure needs more weapons. In this case, instead of more weapons, we got two alternate heads.

First off is this helmeted head, which I presume is to turn Fury into a SHIELD trooper. It’s a nice idea, but army building this figure probably isn’t going to be easy, as it’s been tough to get at regular price. Granted, it’s come down quite a bit since its release. Either way, this head looks a little too much like GI JOE meets HALO for me to get excited about it on a Marvel Legends figure. I’ll bet customizers will go nuts over it. 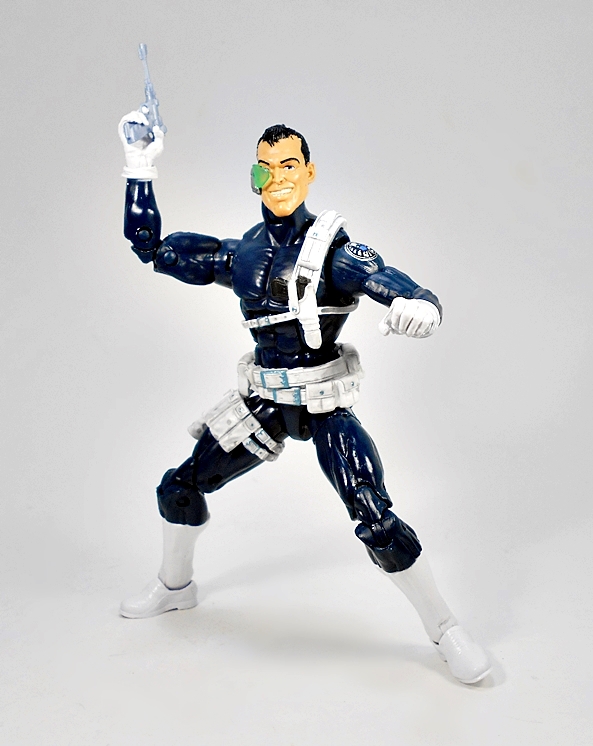 Next up we have a Dirk Anger head, which is a delightful way to troll the casuals. This is a pack-in that both befuddles and delights me and offers further proof that Hasbro is willing to take risks. Was anyone really asking for this? I can’t imagine they were. Am I ever going to display this on the figure? Nope. And yet I’m kind of happy we got it. It’s just a cool and outrageous little bonus. 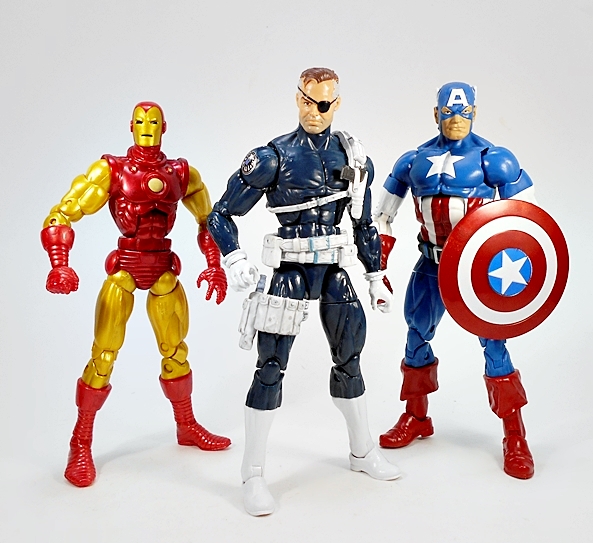 As you can probably have guessed, I was super excited to get a classic Nick Fury on my Marvel Legends shelf. And while I have a few issues with the figure, there’s nothing here that keeps me from enjoying it. Some tighter joints and a little more paint to fill out that hairline and this would have been a five-star release in my book. As it is, it’s still plenty good, and it may very well wind up being my favorite figure in this wave. Next time on Marvel Monday… I’m doubling up on Nuke and Red Guardian so I can get through all these goddamn figures a little quicker!