Halloween is rapidly approaching, and while I don’t usually go in for holiday themed features, it’s nice to have some new horror figures from NECA to look at in the week leading up to the big day. Today I’m checking out the latest release in their “Ultimate” line. We already got Jason Voorhees from Friday the 13th, Part VI, and now we’re going back to Part III with a brand new version of Crystal Lake’s favorite son. I have to say, I was beyond excited to get this figure in hand, so I’ll warn you now, I’m going to go really long today. It’s because I love Friday the 13th just that much… and it’s almost Halloween! So consider this both a love letter to this figure and the movie!

Jason comes in what looks like a glorious, bloated VHS sleeve and this time we get some lenticular 3D art on the front as a nod back to the one and only 3D installment of the franchise. Talk about going all out! You rock, NECA! Even if you didn’t see this film with a pair of red and blue glasses in theaters back in the day, it’s pretty easy to tell it was shot in 3D because half the movie consists of people gratuitously sticking things into the camera. Tent poles, Yo-Yo’s, pitchforks, plucked out eyeballs! Anyway, the lenticular art doesn’t photograph very well, so you’ll just have to take my word that this looks great in person. The front flap is secured by velcro and opens to reveal a window showing the figure and all those lovely extra bits inside from the film. Part III is no doubt a solid entry, even if it doesn’t rank at the top of my favorite entries in the franchise. It does, however, give us the first appearance of Jason in his iconic hockey mask, so it is most certainly an important installment. As always, the packaging here is collector friendly and these Ultimate boxes look amazing when all lined up on the shelf.

Part III may not be my favorite, but I still love it, and this is one of Jason’s looks that I know best. It might just because I’ve seen the film so many times, but this real classic stuff. Jason comes wearing his shabby button down shirt, faded trousers, and black boots. I know I say it just about every time, but I really dig how much work NECA puts into sculpting the clothing. The shirt is all wrinkled, you can see the stitching on the pockets, and I love the way the top button is pulling a bit. An equally fine attention to detail has gone into the trousers and boots. You get some gnarly blood stains on Jason’s neck and another splotch on his right knee and various splashes on his shirt.

Also, check out the build on this guy… it’s perfect. He even has that slight hunchback, just like Richard Booker in costume. If I were just in the same room with this guy, I’d probably shit my pants. And as for articulation, you get rotating hinges all around, as well as ball joints in the waist and neck. OK, let’s took heads!

That’s right, heads… plural. It wouldn’t be an Ultimate release if you didn’t get at least one extra noggin in there, right? The stock head features Jason’s (or should I say Shelly’s) inaugural hockey mask, notably different than the one that came with the Part VI version. Here you get the extra two triangles painted on the cheeks and the silver fixtures down near the jaw. Also, if you go back and read my review of the last Ultimate Jason, I was a little bummed the eye holes were painted and not actual holes. Well, that’s fixed here and it looks great! And yup, the mask is still an actual mask that comes off the figure.

Hello, gorgeous! Ahh, it’s good to see Jason looking so young and fresh and less corpsy. This is his early days, and I always thought his misshapen mug that we see here was a lot scarier than when he went full on zombie. This is a fantastic sculpt right down to the droopy right eye and the slack jaw. The top of his lumpy head even has a mark where the strap from the mask is starting to cut into his flesh. It’s got a phenomenal paint job too, complete with a wash to show off all those grody features. 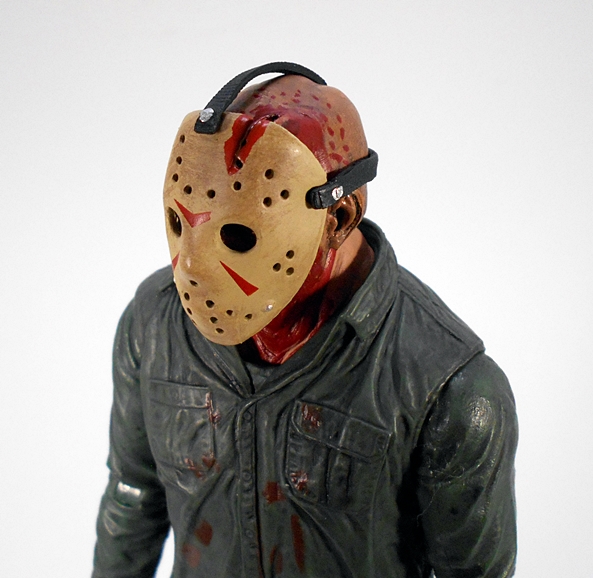 The second head is from after Jason took a direct hit from an axe in the final chase. There’s a cut mark in the top edge of the mask, and a gnarly gash in his head underneath as well as a lot of added blood. What I love about this piece is that it isn’t just the same head with some damage added. It’s an entirely new head sculpt that really showcases those wonderful teeth. Fantastic! Extra heads are all well and good, but Jason needs him some killing tools, and here too NECA really delivered. Let’s go through them in the chronological kill order from the film. To the pitchfork!

OK, so it’s not the first kills in the film. Those go to a cleaver and a knitting needle. The needle would have been a boring accessory, and I can always borrow the cleaver from NECA’s Ultimate Leatherface. Jason used the pitchfork to kill Fox, that lovely Biker chick in the tight pants, off screen, before sticking it into Loco, one of the other bikers’, gut. That barn was just full of all sorts of fun toys for a maniac killer. Anyway, this is a pretty simple farm implement, but it looks great in Jason’s hands. 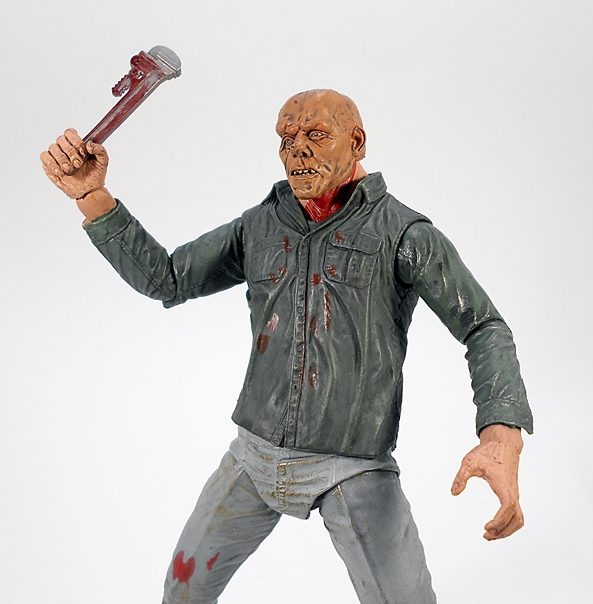 The wrench is hard to spot in the film. I’ve seen this flick more times than I can count, and I still couldn’t place it when I saw the accessory. Naturally, that meant I had to bust out my copy and scrutinize it. Turns out Jason uses it to finish off his Biker Gang Killing Trifecta in the barn by bludgeoning gang leader Ali with it until he’s dead… or is he? I always thought he just used the machete for that, because Ali picked it up and had a go at Jason with it just seconds before.

A couple kills later and we have the harpoon gun, a great detailed sculpt, nicely painted, and that tip is actually sharp! This is about as sophisticated as Jason gets. Actually, I tell a lie. Later he kills a hippie with electricity. But still, the harpoon gun is probably the most memorable weapon kill in the whole flick. Not only does he score a pretty amazing shot right through Vera’s eye at quite a distance, but I feel like the whole 3D gimmick was built around this one epic kill. I also love how Jason drops it afterwards and struts off the pier. It’s also worth noting that this his first on screen kill wearing Shelly’s hockey mask. You don’t see his face until the end, but up until now he’s been killing without a mask on.

Next up, the machete. Old reliable. Easily Jason’s most iconic weapon. There’s not much to say about this baby, other than Jason first uses it to chop through Mr. Handstand from the groin down. Next, Jason kills his poor girlfriend… on a hammock… while reading a copy of Fangoria!!! That’s cold, Jason. COLD! I always thought he did this with the machete, but I’ll come back to that in a few ticks. And I thought I really knew this movie! See how much I take for granted?

Wanna play some poker? Jason used this little number to run through the hippie’s girlfriend. He got it fresh from the fire and it was burning hot too. I’m surprised NECA didn’t put a little orange paint on the tip to make it look like it’s glowing. They usually don’t miss little details like that. OK, now I’m nitpicking.

It’s the final stretch and out comes the axe. They were teasing the axe earlier in the barn with the hippie couple, but it turns out to be Jason’s weapon of choice for the final hunt, although he alternates this one with the machete. 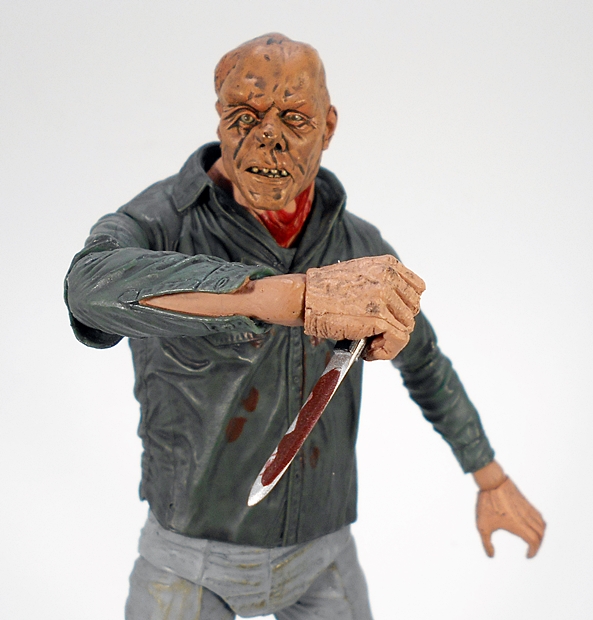 And here’s the knife! I always just assumed that this was the combat knife from the poster, but that’s a combat knife and this is more of a steak knife. It’s a subtle and understated weapon, but it’s got a good presence in the film. It actually turns out to be what Jason used to kill hammock girl, because later on, Chris pulls it out of the back of her corpse and goes slashy-apeshit on Jason with it. She gets a couple good stabs in before he pulls it out of his leg and throws it her head. Sure, he misses, but a hardcore move all the same.

I would be remiss if I didn’t show off one of my absolute favorite things about this figure. Yes, you can simulate the axe hit and holy shit do I love that. I have two of the Part VI Jason for multiple display options, and I’ll likely do the same for this guy. So good! 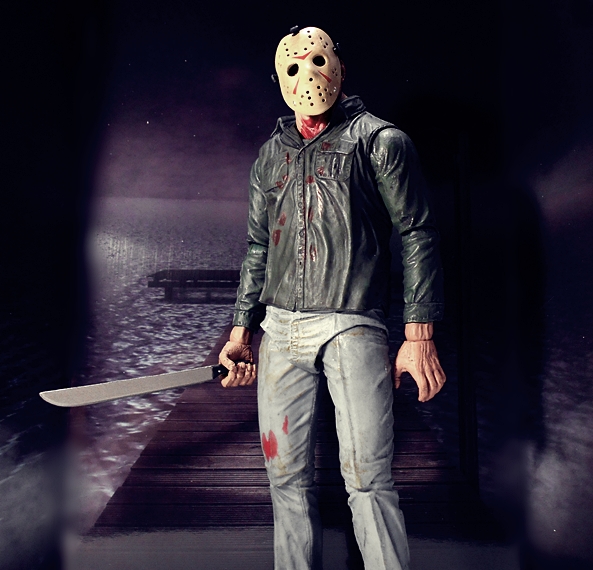 And so that’s the weapon run down! With only a couple missing, this is an impressive inventory and rounds out what is already a truly amazing figure. When NECA made this guy, I doubt they could have guessed it would mean as much to anyone as it does to me, but he is instantly among one of my favorite figures this year. The amount of nostalgia that I have wrapped up in this figure surprised even me. It just transports me right back to those long insomnia-plagued nights when I watched these movies over and over again. I’m sincerely hoping that NECA is going to run through all the Jasons, because as long as they keep making them, I’ll keep buying them!

A New Dimension in Terror!