How about that Ghost Rider on Agents of SHIELD, eh? I actually haven’t seen it, I’m just trying to make a review of a figure from a very old assortment sound topical. I love me some Ghost Rider, but I’ve suffered through almost two seasons of AoS. That was more than enough to know it’s not for me and not even Ghost Rider is enough to get me to come back for more. But hey… we got a new Ghost Rider in Marvel Legends, so Yay! 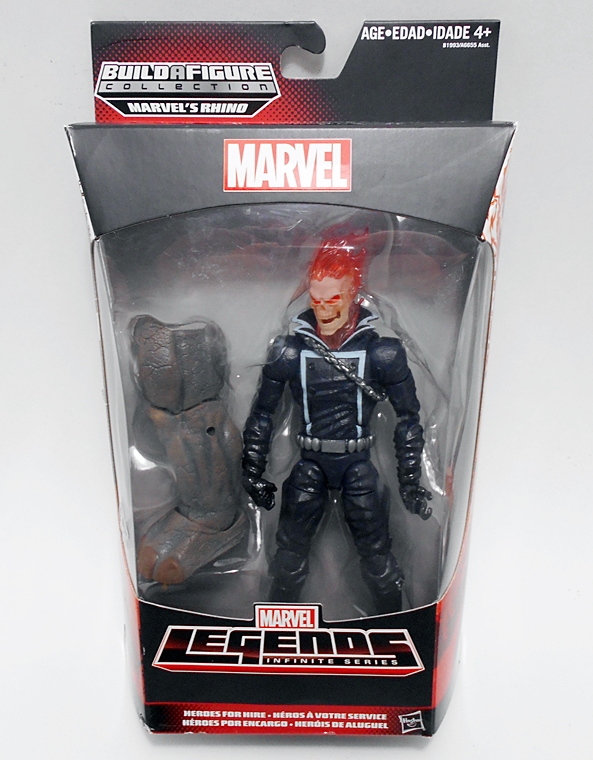 While I believe this is generally considered to be a Spider-Man themed wave, there’s no such branding on this package. Although, I’ll give this one to Hasbro as Spider-Man and Ghost Rider have had their share of Team Ups. This is also one of those figures that shares a slot, in this case with Misty Knight, so neither name appears on the front, just “Heroes for Hire.” That moniker works for Misty, but Ghost Rider? Mmm, not so much. This is actually the second appearance of Ghost Rider in the modern run of Marvel Legends. He was actually one of the first figures released way back in 2012. Of course, that was based off of his contemporary look and this is… 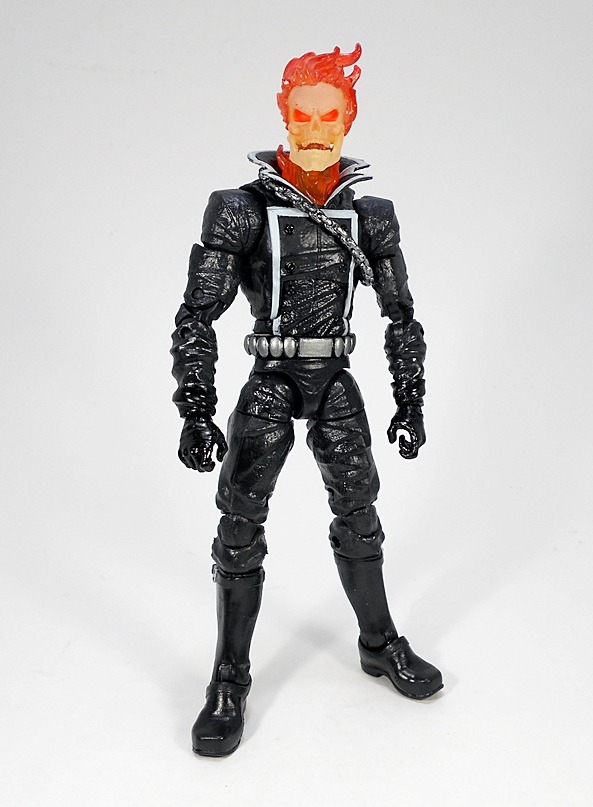 Classic! Yup, we’re getting back to Ghost Rider’s roots here, albeit with a black suit instead of blue, but that’s alright. I’ll gladly take it! While this body has been around the block a few times, this is my first hands on experience with it. I never did find an AIM Soldier and I didn’t pony up for the comic version of Peter Quill in that Guardians boxed set. Whatever the case, it looks absolutely fantastic here. The lanky body fits the character perfectly as does the sculpted button down front flap on the tunic. I think the Marvel Universe figure did the same buck sharing for its versions of the AIM Soldier and Quill. You gotta go with what works, whatever the scale.

From the neck down the coloring here is about as simple as you can get. The buck is predominantly glossy black with some white trim painted on the outline of the tunic’s flap and around the inside of the high collar. Throw in a little tarnished silver paint for the belt and chain and you’ve got the extent of Ghost Rider’s color palate. 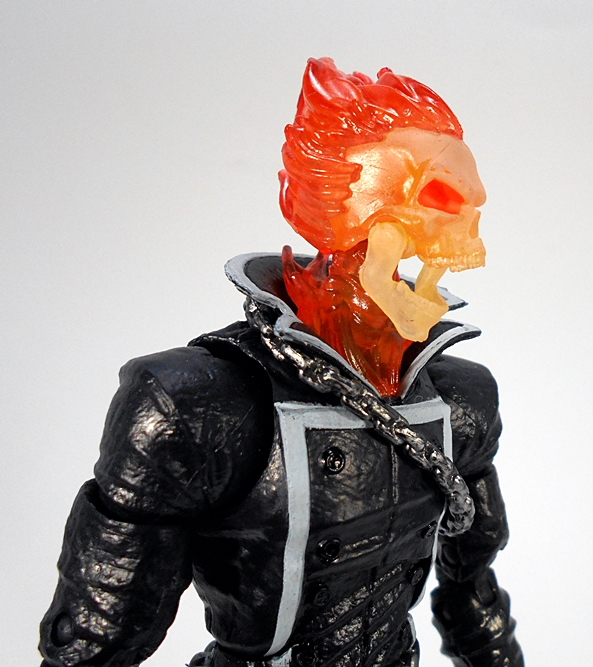 But it’s really what Hasbro did with the portrait here that takes this figure up a couple of notches. I mean, damn this is great stuff. The sculpt of the skull mixed with the beautiful orange translucent plastic used for the flames around the neck and crown. This looks absolutely amazing and even the way the skull is painted but the orange bleeds through it is a fantastic effect. And we even got a hinged jaw. So cool! Also, thank god the flame effect on the head is all one piece. The extra piece of flame on my previous Ghost Rider Legends figure constantly pops off and goes missing. 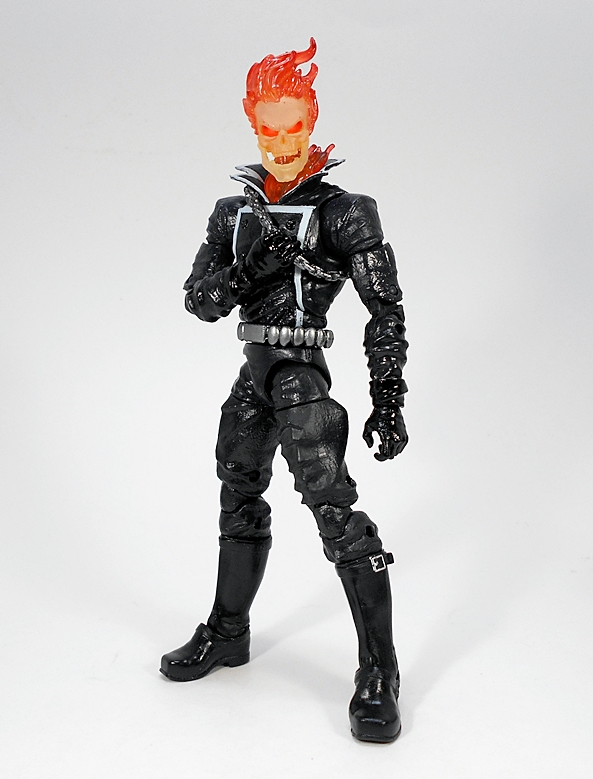 Unfortunately, this figure isn’t an entirely smooth ride, so let’s talk articulation. The points that I’ve come to expect from my modern Legends are all there. The arms have rotating hinges in the shoulders and wrists, double hinges in the elbows, and swivels at the biceps. The legs are ball jointed at the hips, have double hinges in the knees, and swivels in the thighs. The ankles are hinged and have lateral rockers. There’s a swivel in the waist and ab crunch in the hinge, and the neck is ball jointed. So what’s the problem? Well, for starters the hinges in the elbows and knees are super soft and gummy. It’s bad enough that my figure’s right leg was warped in the package and I had to do some heat treatments to straighten it out. The other issue is the top hinges on the elbows are really loose. The right one even has trouble staying up. And there’s no amount of heat that’s going to help that. Bummer. 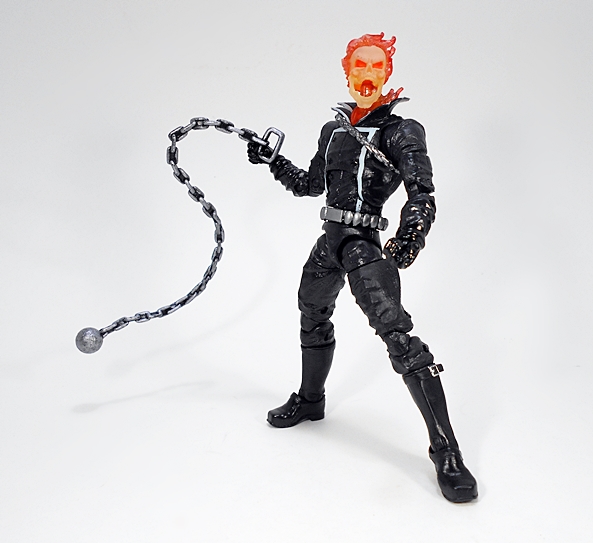 I’m also a little bummed that there are no accessories included, other than the BAF part of course. Even the 3 3/4-inch Marvel Universe version of Ghost Rider came with a chain. It seems like a reasonable expectation, but nope. Fortunately, I was able to raid my Thundra figure for her ball and chain and it works quite well. So well, she may never get it back and I might just snip the ball off the end. 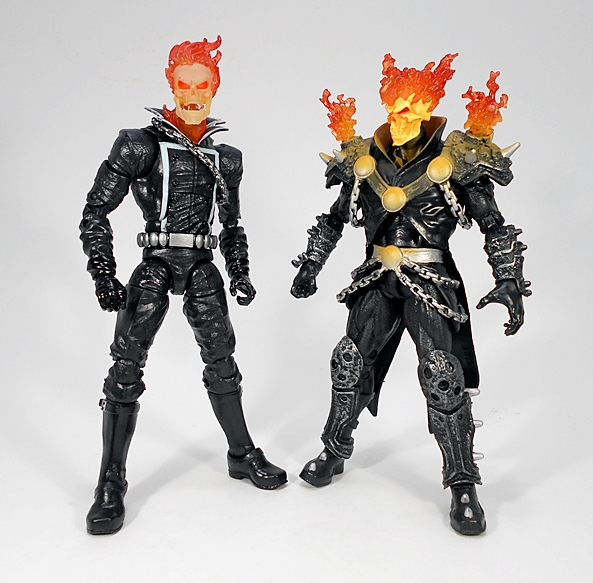 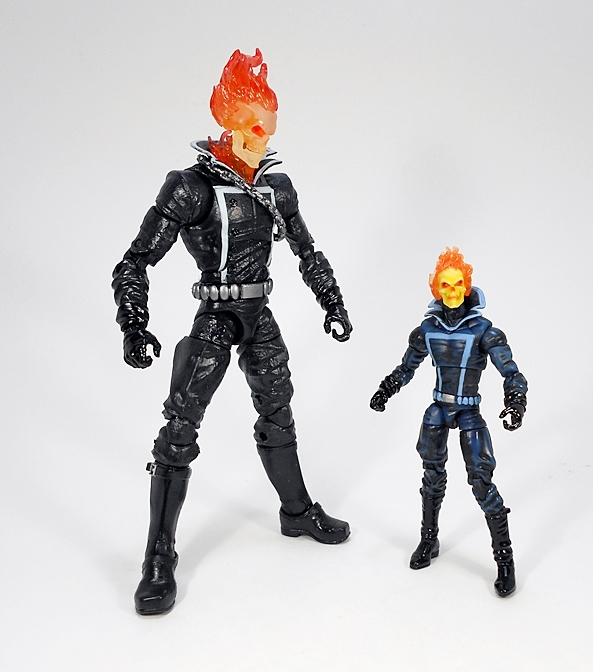 If it weren’t for some soft plastic and loose joints, Ghost Rider could have been very nearly a perfect ten. I still dig the original release of the character from Wave 1, he looks so bad ass, but this is the Ghost Rider I know and love and Hasbro did a beautiful job on him. One of these days, I may hunt down another and see if I make out any better with the joints the second time around.