As promised, I’m back today with a look at some more of Hasbro’s 3 3/4-inch Rogue One figures. Yesterday, I tackled the first half of the initial wave with Jyn Erso and K-2SO, and today I’m having a look at the Imperial Stormtrooper and the Imperial Ground Crew. 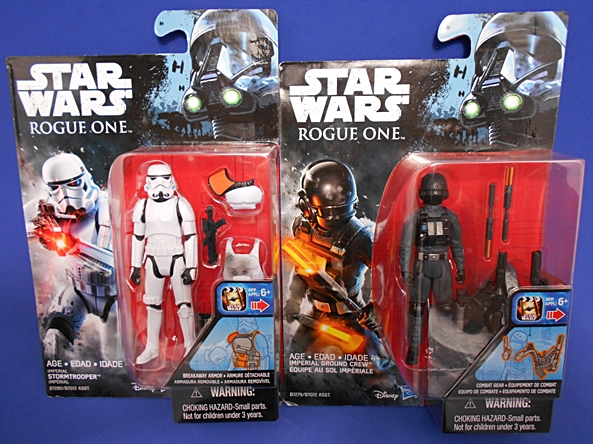 And look! This time I didn’t forget to take a packaged shot before ripping them open! Once again we get some lovely character art beside the bubbles and the Rogue One Death Trooper branding on the top, right corners of the cards. He is clearly pleased that I have added two new Imperials to my collection. The backs of these cards feature short blurbs about the characters and a multi-lingual soup of text. The annoying mission themed categories of The Force Awakens line are gone as are the Build-A-Weapon parts. Let’s start with the Stormtrooper! 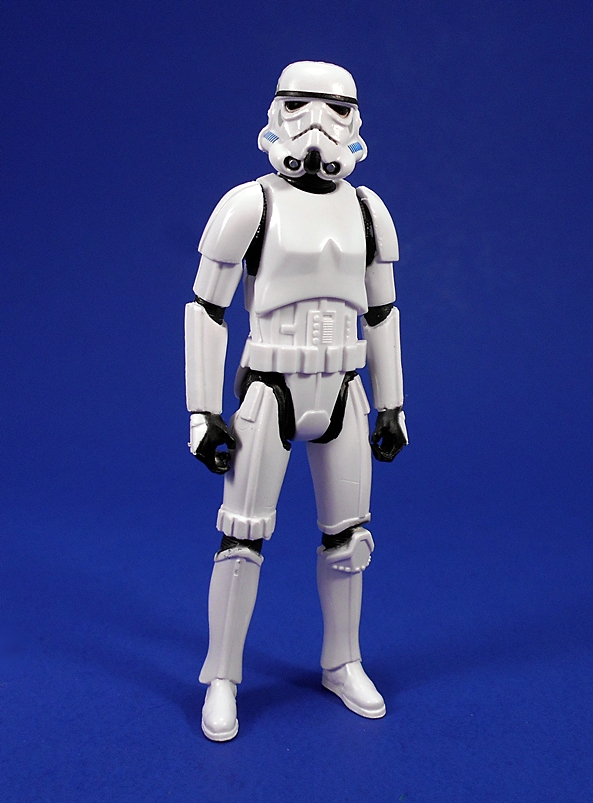 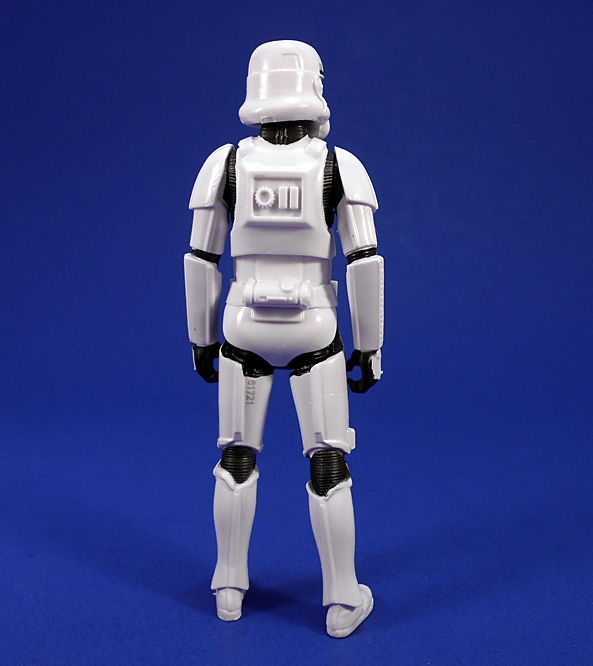 What can I possibly have to say about yet another 3 3/4-inch Stormtrooper? Well, mainly that this is a fantastic little figure. The sculpt is sharp, the paint is clean, the plastic is nice and glossy, and he just looks amazing. And given that he’s just five points of articulation, he can stand with total stability and ram-rod straight, making him perfect for those huge Imperial processions we all fantasize about displaying. I could easily see setting up a display by lining up dozens of these figures and peppering in some of the super-articulated modern Stormies for a little variety. In short, I adore this figure. And I will definitely be on the hunt for some more. 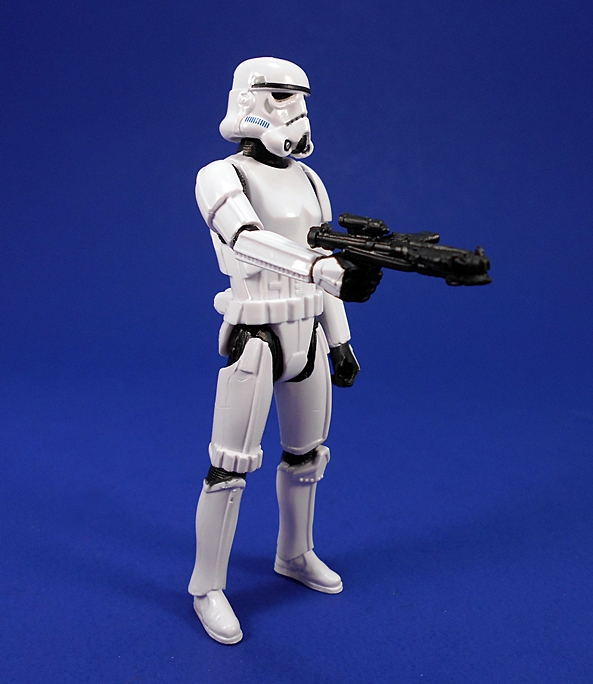 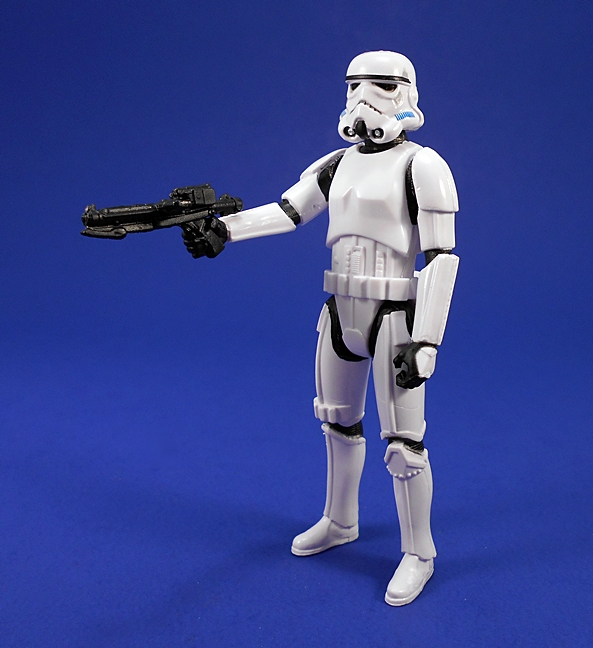 Naturally, the Stormtrooper comes with a standard E-11 blaster, which he can hold in either hand. The only knock I can come up with against this guy is that I wish he had a holster for it like some of the super-articulated 3 3/4-inch Stormies of the past. He also comes with a pretty clever combination of chest pieces to add a little play value. 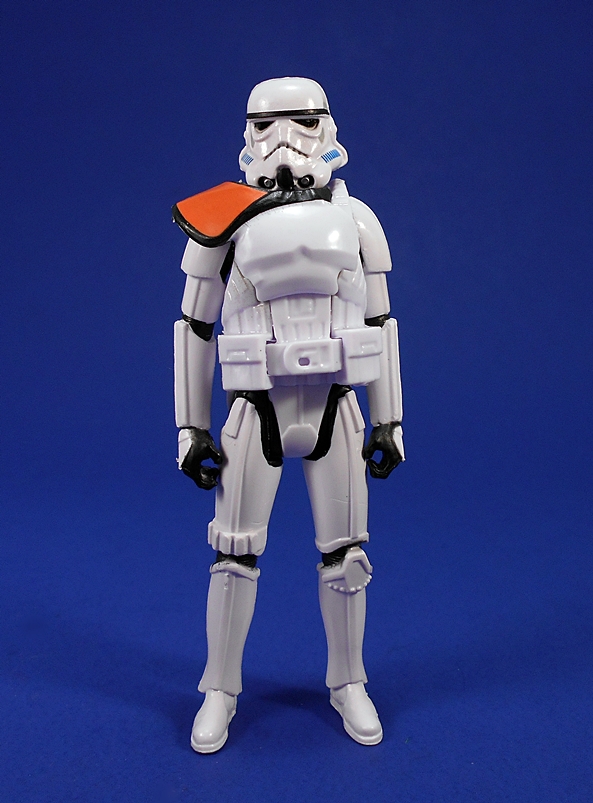 By popping on this chest piece, you can make him into an officer. Yeah, it makes him a lot bulkier and it doesn’t look all that great, but the addition of pouches to the sculpt helps hide it a little bit. Now, if you press in on the bottom of the plate… 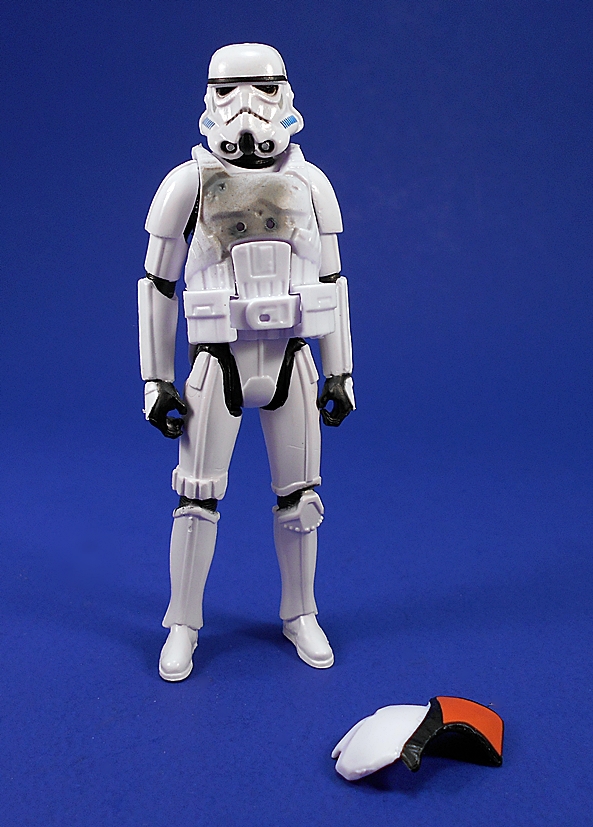 It pops the top of the chest piece off as if he’s been hit. Honestly, I’m never going to display this figure with these parts. They’ll likely never find their way out of the dreaded Tote of Forgotten Accessories, but I still think it’s a clever gimmick and I have a feeling the kids will get some fun out of it. Best of all, it doesn’t detract from the figure. If you don’t like it, you can just cast it aside. Moving on to the Imperial Ground Crew… 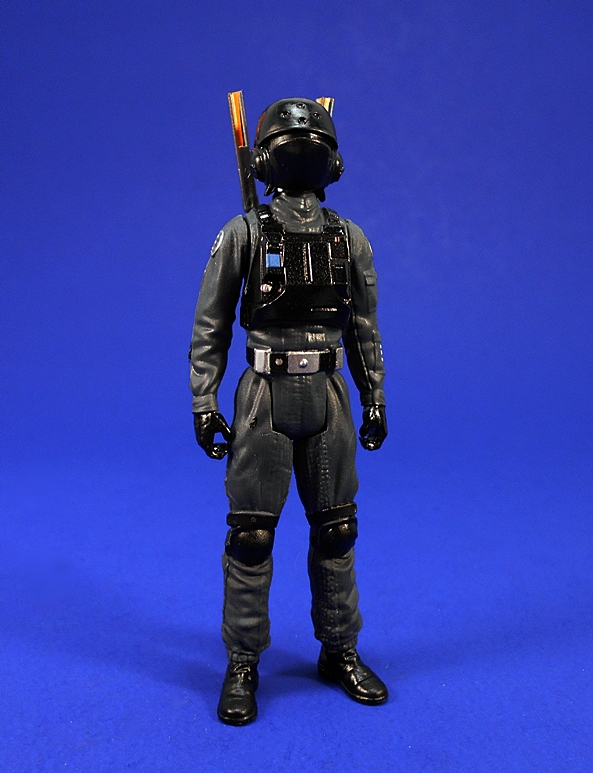 The back of the card describes these guys as the people who keep the spaceports and Imperial facilities running. I’m always up for expanding my Imperial forces and I love the idea of getting background support characters like these to fill out hangers or other displays. He has a very classic Imperial look to his outfit, what with the cheery dark charcoal gray on black deco and I can certainly see a couple of these guys strolling through the background on one of the Death Star scenes in A New Hope. Indeed, the helmet is very reminiscent of the Death Star Gunner. This guy features some very sharp paint detail. 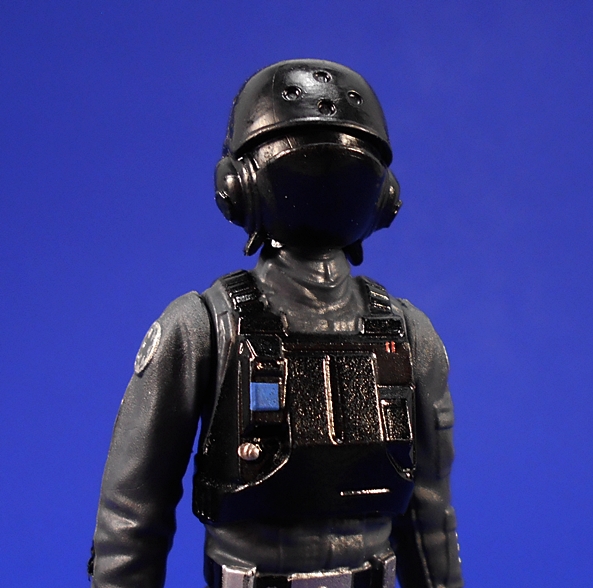 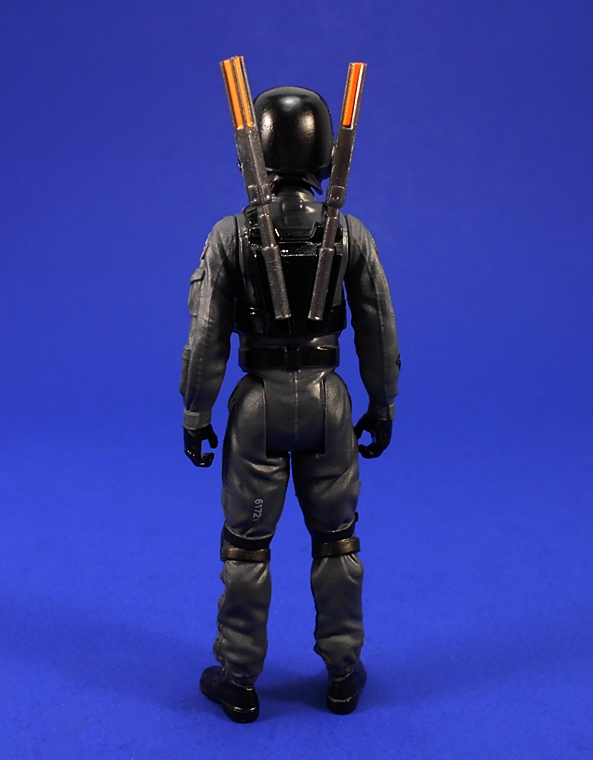 The Ground Crewman has a backpack that stores his batons, although they have a habit of falling out. 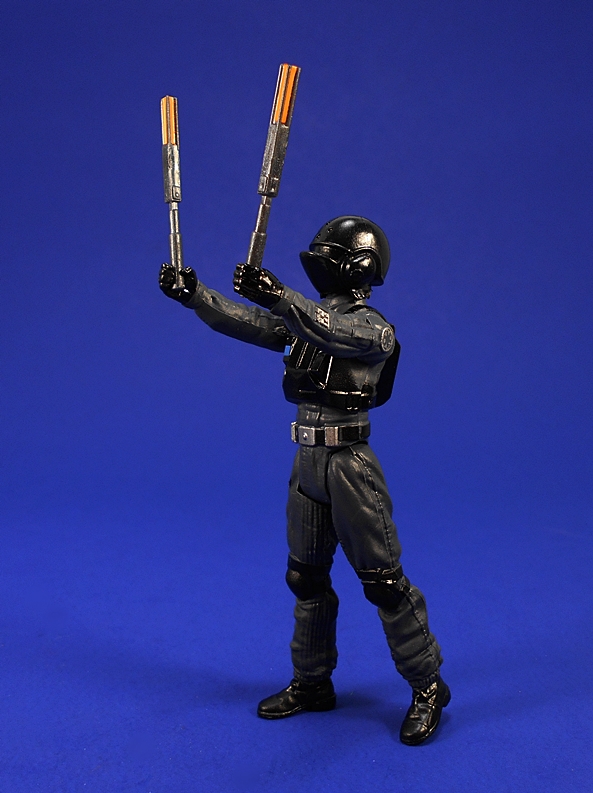 Speaking of the batons, the character art on the card has him wielding these like weapons, but I’m pretty sure they’re intended to be the directional batons that ground crewman use to direct aircraft. At least that’s the function for them that I’m going to go with in my head, because I think he looks really good waving in Tie Fighters. Some kind of sidearm would have been nice, but instead Hasbro invested a whole lot of plastic into this backpack… 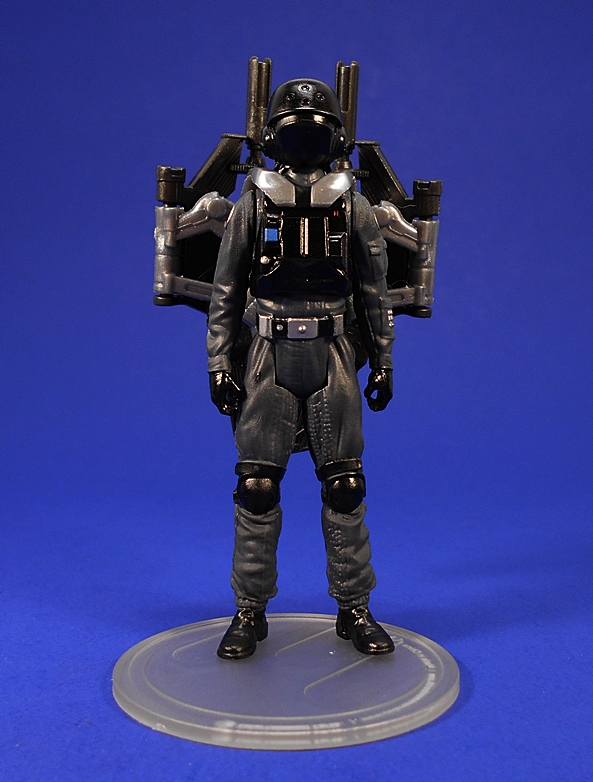 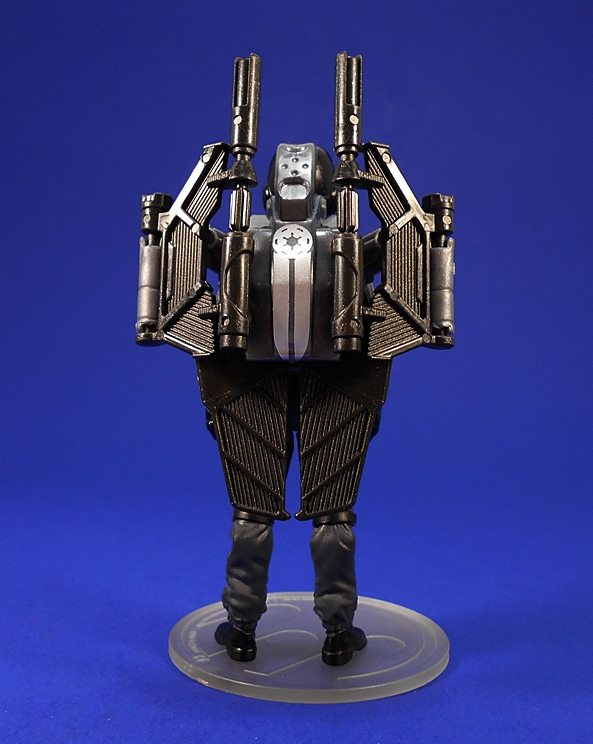 What the hell? I’m totally torn on this thing. On the one hand, for a made-up toy gimmick accessory it looks really cool, even if it isn’t something I’d expect to see in a Star Wars film. The sculpt is beautifully detailed and there’s some excellent paint work. On the other hand, why would these guys have something like this? Oh, wait… it gets better! 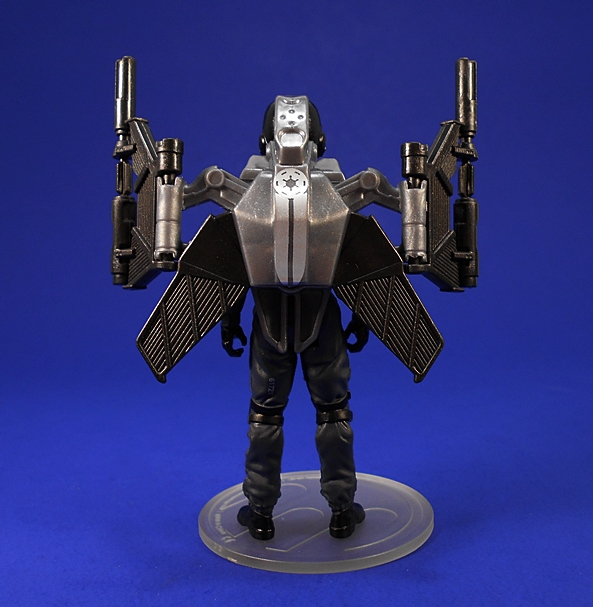 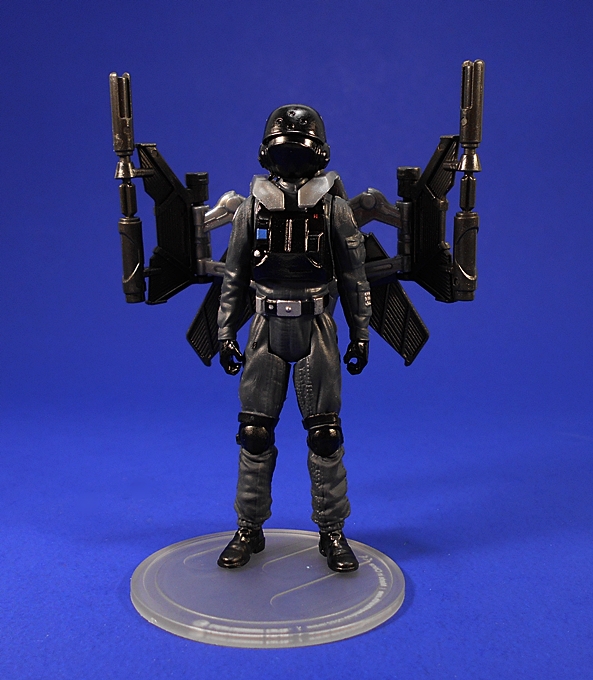 Obviously, it’s supposed to be some kind of attack jetpack. The guns and wings are articulated and while it doesn’t reach the Power of the Force 2 levels of absurdity (Seriously, go back and look at Han Solo’s POTF2 Smuggler’s Pack), it just seems really odd to give it to a bunch of ground crew who probably spend their days directing landing craft, stacking cargo containers, and eating space donuts. That having been said… 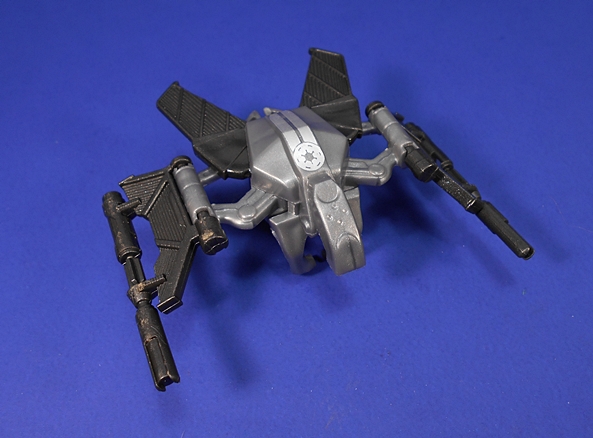 It does make a pretty nifty drone. I could see certain Imperial Troops carrying these on their backs and deploying them on the battlefield. And maybe in my own private head canon, these Ground Crew could also serve as Drone Troopers who maintain and operate these things as support craft. Yeah, I spend way too much time thinking about this stuff! 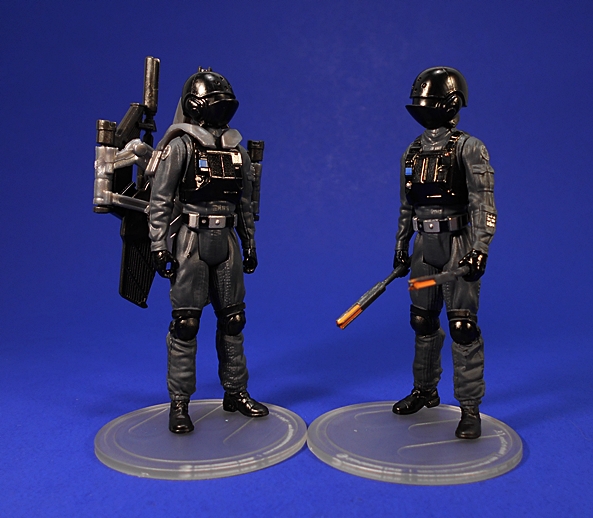 Before wrapping up, there are a couple of other things worth mentioning about the Ground Crewman. First off, he’s very short. He’s about half a head shorter than the Stormtrooper. We’ve already seen Jyn wearing a uniform similar if not identical to this one, so it seems like she’s going to bonk one of these guys on the head and steal their clothes. That would explain not only why the figure is so short, but why we’re getting one in the first wave. I seem to recall seeing pictures of a disguised Jyn figure and it was just a head swap. I’m not recounting anything original or groundbreaking here, but I just thought it worth mentioning. 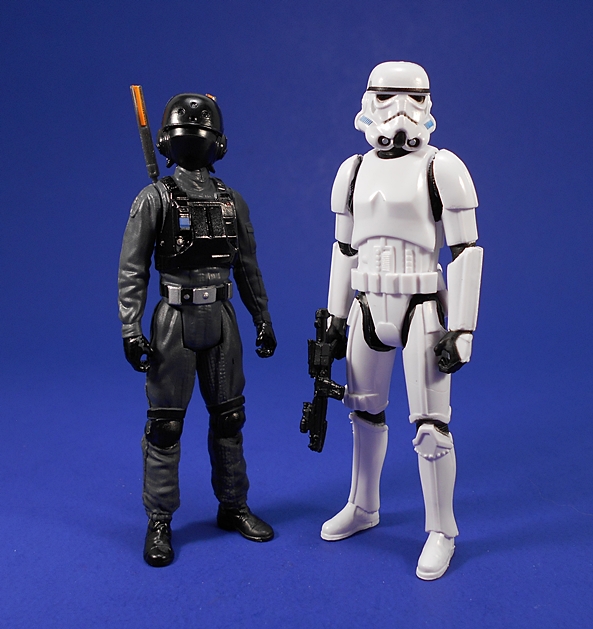 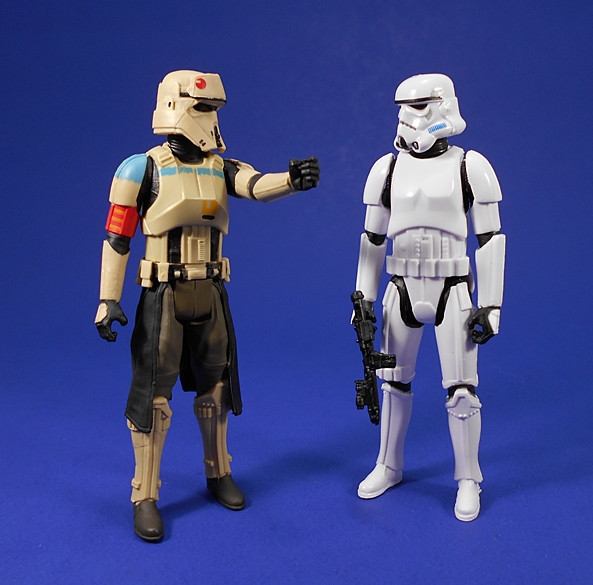 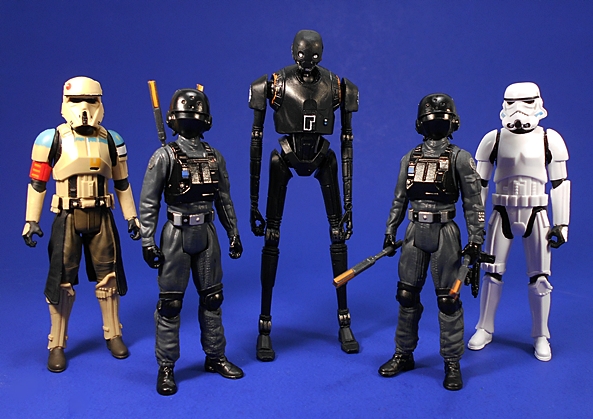 While I thought yesterday’s pair of figures was OK, I definitely like this pair a lot more. That should be pretty evident, since I already have two of the Ground Crew and I’m actively hunting more Stormtroopers. Granted, I’m generally biased toward Imperial figures and it looks like Rogue One will be rich with new Imperial designs for Hasbro to explore through their toys. The diversity of character selection here has already been a lot better than what we got for The Force Awakens, as far as I’m concerned and while the 6-inch Black Series has been solid, I find I’m still addicted to these little 3 3/4-inch guys.