I cheated y’all out of last week’s Transformers Thursday because of holiday madness, so let’s bring it back home this week with a new Titans Return figure. This time I’m going back to the Legends Class to look at a certain Autobot that fans either love to hate, or hate to love… I can’t remember which.

So, what do you say? Let’s look at Wheelie today! 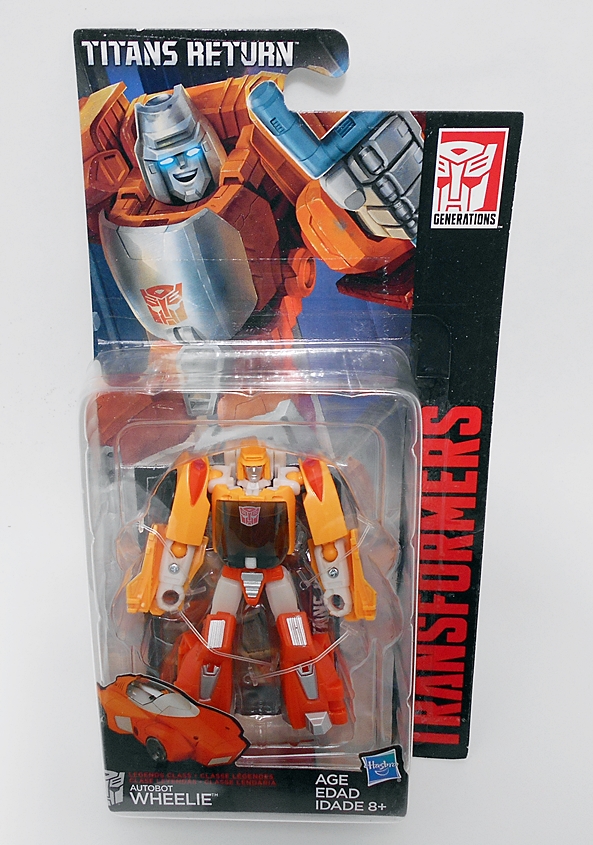 Of course, Legends is the smallest of the classes, unless you count the tiny Titan Masters and their little vehicles. The package is the same format that we last saw with Rewind, and I like the character art here even if it misleadingly suggests that there might be a slingshot in here somewhere. If you want that, you’ll have to rob it from the last release of Wheelie, a figure that I never bothered to pick up. And I’m glad I didn’t, because that one was a remolded Deluxe and I think this brand new Legends Class suits him better. Let’s bust him out and have a look at his alt mode first! 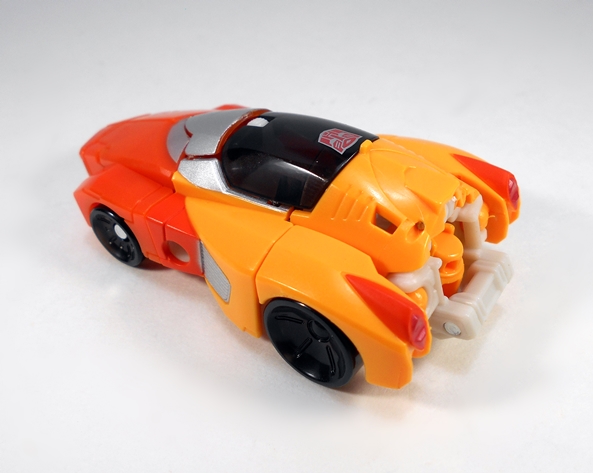 Wheelie’s vehicle mode is a little futuristic car, which certainly works for me! At least in theory. In practice, I could not get all the panels to lock together the way they should. The tabs are all there, it’s easy to see what’s supposed to be happening, but the tabs that are supposed to connect the arms to the hips kept popping out. I went in there with a razor and did a little shaving and he’ll hold together pretty well now, but I still get some gaps in those seams. 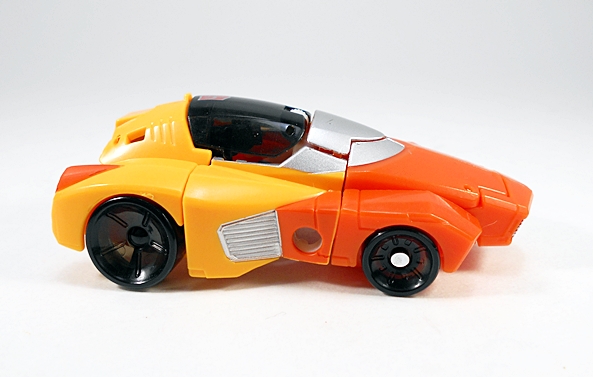 Looking past that issue, everything else is great here. The orange and yellow plastic is bright and snappy and it really suits the character. Toss in some of that lovely silver that Hasbro’s been using lately and this vehicle mode pops beautifully. There’s not a ton of sculpted detail here, but that fits because he’s supposed to look smooth and sleek. You do, however, get a few sculpted panel lines and some grills on the front and sides.

The canopy and the back each hinge upward and open to reveal a compartment for the driver. Wheelie’s head is not a Titan Master, but you can still take one from another figure and put him inside just like the Deluxe Class figures and that impresses the hell out of me. I grabbed Hyperfire here to demonstrate. I believe the Takara version will be coming with a Titan Master, just not one that can function as Wheelie’s head. 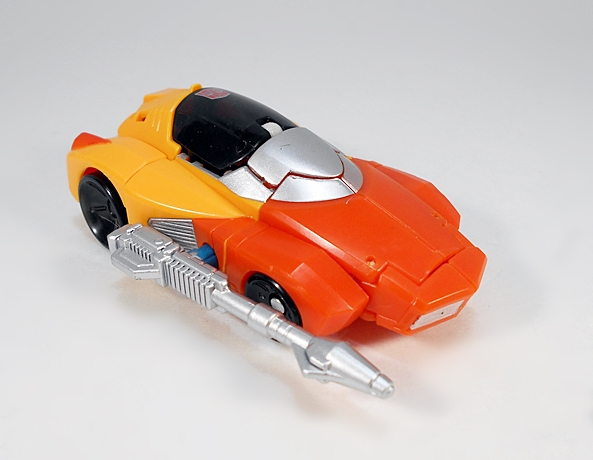 Wheelie has a couple of ports on his sides, but he doesn’t come with any weapons, so you’ll have to borrow that too if you want to weaponize his vehicle mode. Once again, I made use of Blurr to give him a side gun. I like the way Blurr’s rifle matches the silver accents on the car.

Give Wheelie a gun, because killing is fun!

Wheelie’s transformation is pretty cool, especially the way the driver compartment shrinks down and folds up into the chest. While I had some nits to pick with the vehicle mode and its troublesome gaps, I’ve got nothing but love for this little bot mode. He’s nicely proportioned and just looks fantastic. There’s some wonderful little touches on him too like the sculpted springs inside his hollow thighs. If only the budget had allowed Hasbro to paint those silver to make them stand out more. I may have to take a Gundam marker to them.

From the back, he looks a tad unfinished, but not bad at all. His arm kibble is a little more apparent here and it can get in the way sometimes, but it’s nothing that really bothers me. I really dig the way the quarter panels and wheels of the car fold in to fill out his lower legs.

Titans Return has given us some great head sculpts and Wheelie here is no exception. The bucket-style “helmet” is a good match for the characters G1 animated counterpart and the silver paint on the face and blue in the eyes looks great. The strategically placed Autobot emblem on the chest is also appreciated.

As is often the case with these Legends Class figures, you get a lot of ball joints for articulation. Shoulders, elbows, hips, knees are all ball jointed and the head can rotate. Wheelie is undoubtedly a fun little figure to play with and pretty well balanced too! 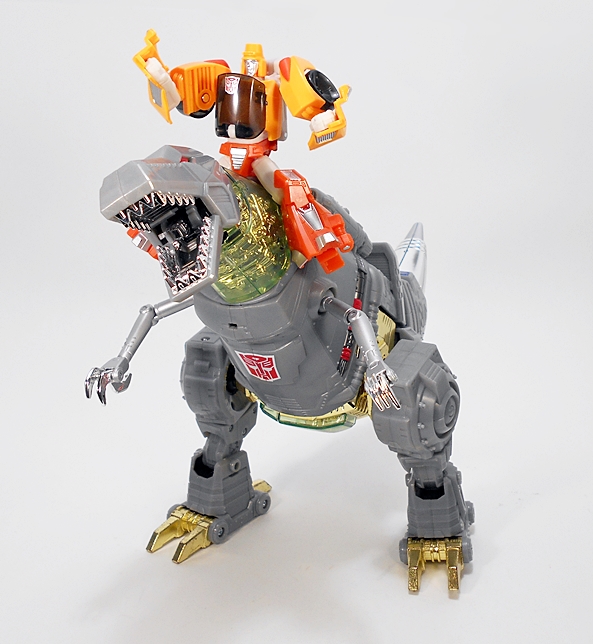 I sure as hell wasn’t screaming for a new Wheelie figure, but now that I have this little fellow in hand, I’m mighty glad Hasbro made him. Despite being the smaller class, he scales perfectly with the Generations and Titans Return Deluxes and he brings me another step closer to filling out my Sunbow Season 3 Autobots. I’d argue that this is one of the best Legends Class figures we’ve had in a while, and that’s saying something, because most of them have been damn good. Now, if only I could find that Legends Kickback for a decent price and complete my Insecticons, I’ll be a happy camper.