I was expecting to have the third wave of Titans Return Deluxes to start looking at today, but UPS had other plans and they won’t arrive until tomorrow. Not to worry… I’ve been saving the Combiner Wars Generation 2 Aerialbots box set for just this occasion. Hasbro unloaded a bunch of these sets off their website a little while back for the ridiculously low price of $30 shipped. And seeing as how much I loved the G2 Stunticon set, I simply couldn’t resist. My plan is to cover this set just like I did those G2 Stunticons, in four parts, but I’m not going to do it in a straight shot. I’ll just keep coming back to these when I’m hard up for content, so getting through this set is going to take a while. For today, lets kick it off with a look at the packaging, Silverbolt and Powerglide!

The six figures come in an enclosed box with some beautiful landscape-oriented artwork on the front and lots of pictures of what’s inside. Primus knows, the Combiner Wars packages haven’t been my favorite, but this elevates it to a new level. You get a bitchin’ shot of G2 Superion shooting off his knuckle cannons with Cybertron in the backdrop. This feels like something special and it’s aces! On the other hand, unlike the Takara sets, there’s no opening flap or window, which makes it feel a little less premium. Open up the box and the goods are laid out on a clear plastic tray in their separate vehicle modes with their weapons and combiner parts around them. Considering I went the Takara route for the original CW Aerialbots, I like the idea of owning this set to represent Hasbro’s take on the packaging.

Flip the box over and you get this portrait-oriented shot of G2 Superion in all his colorful glory as well as smaller shots of each of the four figures in both robot and alt modes. Fantastic! 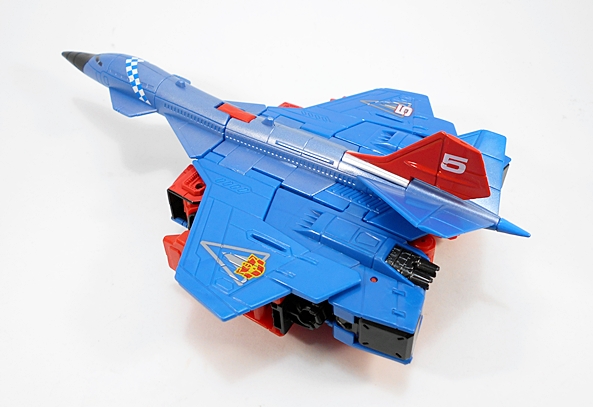 And wow, check out Silverbolt! His Concorde alt mode casts off its mostly white G1 body in favor of this blue deco with red accents. The body of the jet has a truly distinctive light metallic blue finish unlike anything I’ve seen before. It’s paired with the high gloss, deeper blue wings and tail fins with red showing up on the tail dorsal fin and in a few other spots. I’m not sure if they actually attempted to match the blue plastic with the blue paint and failed, but I really like the subtle two-tone effect here. Besides the impact of the color change, what strikes me most about this toy is how much work Hasbro put into the repaint. I was expecting something quick and dirty, but what we got shows some true care. 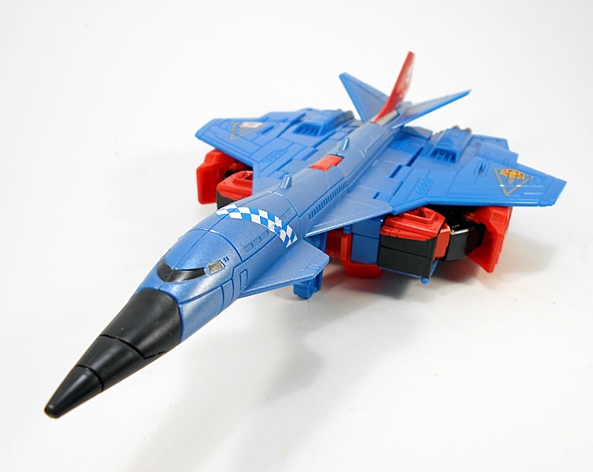 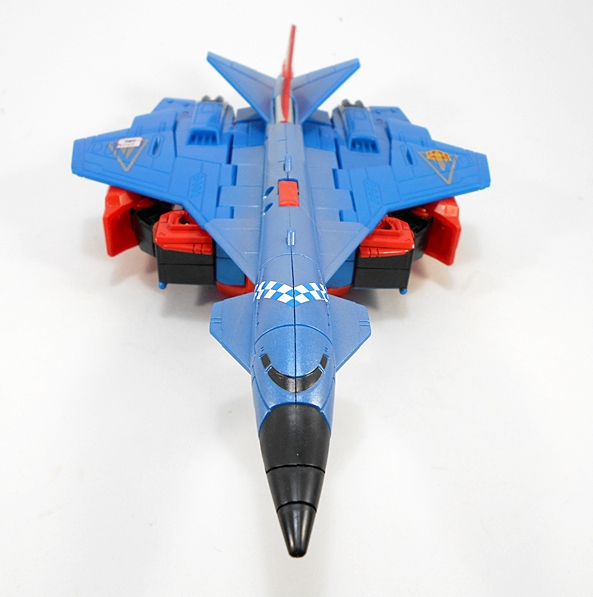 Extra flourishes include the G2 Autobot symbol on the one wing and “5” on the opposite, both framed with a pair of silver triangles. There are also “5’s” printed on the dorsal fin and a white and blue checkered “V” stamped just behind the cockpit area. Finally, you get some high gloss black paint on the engines. It’s a gorgeous repaint of a very solid alt-mode, which brings out the sculpted panel lines in a way that the original white plastic didn’t. Again, the quality of paint here is just superb!

Transformed into his robot mode, Silverbolt trades a lot of that blue real estate for more red, in this case bare red plastic that still has a bit of a glittery, metallic finish. Also thrown into the mix is more black and a little silver on his abdomen. It’s a pretty well balanced deco and it’s topped off with a G2 Autobot emblem stamped proudly on his chest. Obviously, I identify more with the G1 colors and those will always have a place in my heart, but I cannot deny that this is one damn attractive figure! 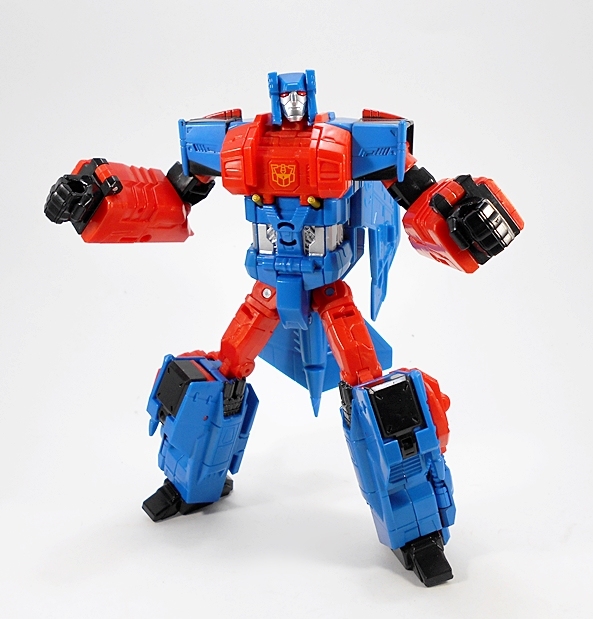 I particularly love what the colors do for this head sculpt. The face is still silver with a very high quality look to the paint. His “helmet” is now blue, and his eyes are painted a gorgeous shade of red.

You get the same rifle and “shield” combo, which will combine to form Superion’s gun. The rifle is a little too long for Silverbolt and the shield is pretty worthless, but otherwise, I love still love this toy and it looks fantastic in the new G2 colors. Unfortunately, I can’t say I have quite the same enthusiasm for Powerglide, though. I don’t have a lot to say about him, but let’s start with his alt mode. 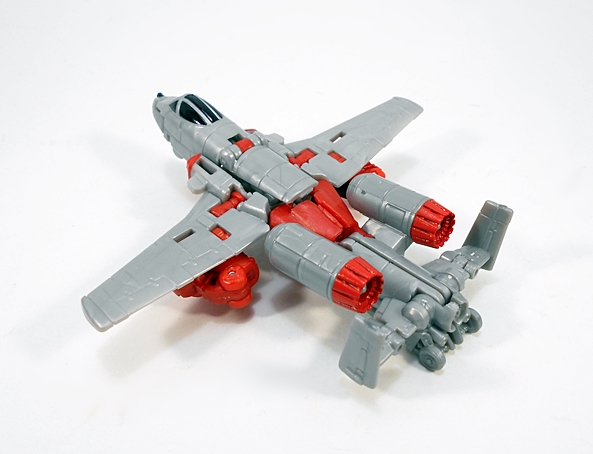 The original release of this Legends Class figure will go down as one of my favorites in recent years, so I have a lot of love for this mold, even if the alt mode is difficult to hold together. The G2 version is almost a palate swap of the original only here the light tan plastic is replaced with gray. It’s that gray swirly stuff, that I’m not all that fond of, but it’s not too bad in small amounts like on this little guy. That having been said, the deco here isn’t my favorite. I just feel like the smaller amount of red overpowers the silver. I don’t hate it, but I don’t love it either. 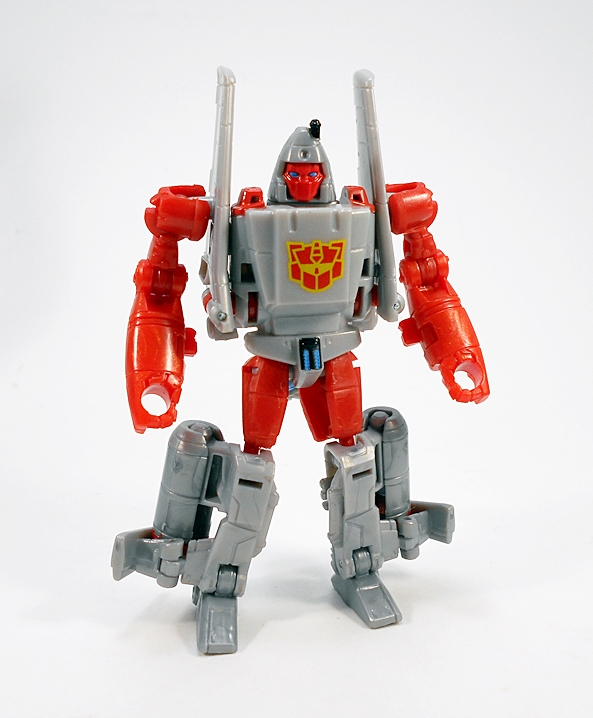 The robot mode is more of the same, although I think I prefer the deco in robot mode a little more than in alt mode. You get an extra little bit of paint on his crotch piece and that glorious G2 Autobot emblem stamped on his chest. Unless my Transformers history is off, I don’t recall Powerglide ever getting an official G2 release and I feel like these colors aren’t quite in the spirit of the rest of the G2 Aerialbots. Still, it’s a decent repaint of a cool figure. 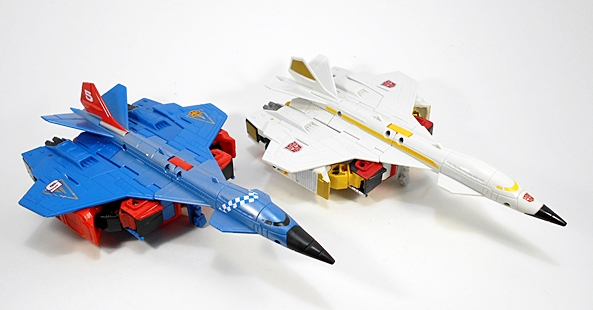 When it comes to this Powerglide, I can take him or leave him, but Silverbolt is a pretty great looking toy for what could have been a quick and dirty repaint. I’m extremely impressed with what I’ve seen so far out of this set and I’m looking forward at checking out the limbs in the future. But as I said earlier, that won’t be until next year, because next Thursday I’ll start on the third wave of Titans Return Deluxes, and I wouldn’t be surprised if I get a couple more of the bigger ones for Christmas.